Once again the second half of July was quite unsettled but often warm and cloudy at night and included some easterly airflows. The last day of the month and the first few days of August saw much higher daytime temperatures, getting into the lower 30s °C in the southeast with winds generally from the south. The second week was back to westerly winds, which all but ended the potential for decent moth immigration.

The steady arrival of interesting migrants continued through July with a minor influx of Bedstraw Hawkmoths the most visible feature. The first was at Tynemouth (Northumberland) on 15th and was followed by 15 others between Shetland and Dorset and included two inland in both Northamptonshire and Staffordshire. This was the largest show since 2003 when 44 were recorded. The species has bred in East Anglia since, so keep a lookout for the impressive pink-spotted larvae, basking in the sun on rosebay willowherb, bedstraws and fuchsias over the next six weeks.

Bedstraw Hawkmoth at Woodnewton (Northants). One of two adults in that county at the end of July 2011 (photo: Nick Smith).

The early-July Small Marbled influx slowed down considerably, although one managed to reach the Isle of Bute (Argyll) on 27th. At least another 24 can be added to the 86 already logged. Most of the later ones were from Dorset, especially in the Weymouth area, and the species has now been found to be breeding in at least two localities in the county. Second-generation adults should emerge towards the end of August.

Although a resident breeder in Scotland, single Great Brocades were at Spurn (East Yorkshire) on 19th July and at Alsager (Cheshire) the next day. Singles at Tynemouth on 22nd and Howick on 24th (both in Northumberland) were obvious migrants. 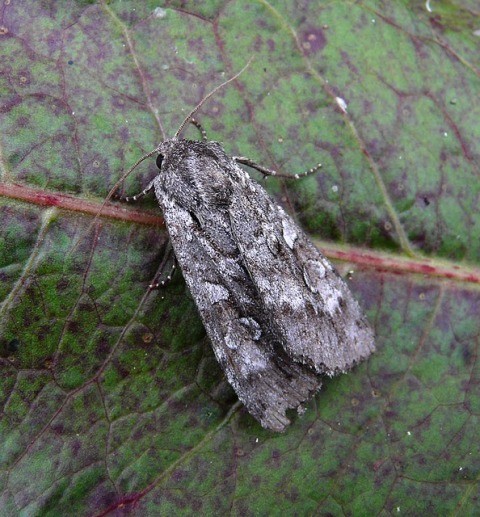 The two rarest macro moths of this period were both found in Kent. A Three-humped Prominent was trapped at a constant-effort site in Dymchurch on 2nd August. This was the first in the UK since 2006 but the second at that particular locality, following another there in 1998.

Nearby and almost completely 'out of the blue' came Britain's eighth Pale-shouldered Cloud at Paul Howe's Saltwood garden trap on 11th August. Since the first in 1996, recorded only from Kent, London and Suffolk, this smart dinky noctuid has bred as close as Belgium, so may be expected to colonise at any time. Paul has also recorded a further four Metalampra italica in the last month, suggesting that this species has already got a breeding foothold in the Folkestone area. 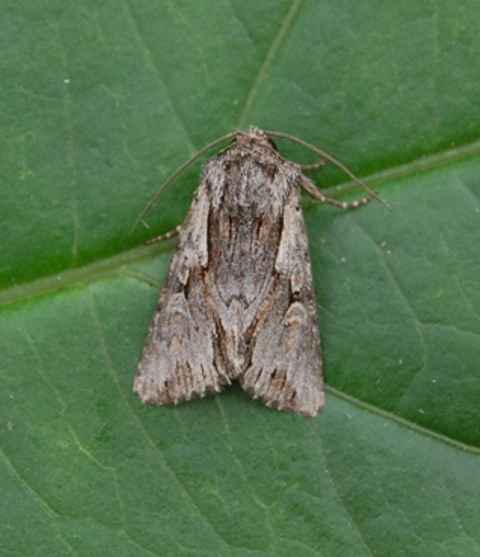 After last year's bumper influx of Splendid Brocade it was thought that the species may be about to colonise southern England. This summer it has gone 'back to rare' and the only two found since mid-July were both on Hayling Island (Hants) on 21st and 26th July.

The only other migrant hawkmoths included a Striped Hawkmoth at Poynton (Cheshire) on 19th July and a Convolvolus Hawkmoth found by day at Weymouth on 9th August. Further migrant Bright Waves were at Bracklesham (West Sussex) and Lovedean (Hants), both on 20th July. Surprisingly only two Ni Moths were reported: at Lydd-on-Sea (Kent) on 15th July and Bewdley (Worcs) on 11th August. The latter was in prime condition so may have been a second-generation British-bred individual. 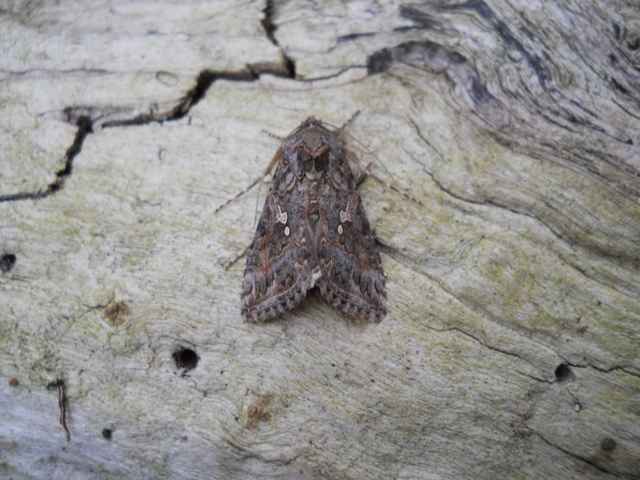 The only Scarce-bordered Straw reported was at Sunderland Point (Lancs) on 20th July. A Plumed Fan-foot was at Lydd-on-Sea (Kent) on 21st July. Scarce Chocolate-tips were again on cue at nearby Dungeness (Kent) with individuals to light on 26th and 28th July.

A Gem was at Fareham (Hants) on 4th August. The fourth ever Rest Harrow for Suffolk was at Bawdsey on 5th August. A Dusky Hook-tip was at Sandwich Bay Bird Observatory (Kent) on 10th August followed by a Cosmopolitan there on the 12th. Another Dusky Hook-tip was at Pegwell (Kent) on 13th. Overall the supporting cast was much thinner than last month: Dark Sword-grass were still widespread and in good numbers, with Portland (Dorset) alone recording 86 individuals. The pick of the rest were five Blair's Mochas, four Pearly Underwings, three Small Mottle Willows and six Bordered Straws. Hummingbird Hawkmoths were also fewer in number.

Both Dark and Light Crimson Underwings appear to have had good seasons, with good numbers recorded in their New Forest stronghold, and several of both wandering to other localities in Hampshire and West Sussex. Migrant Dark Crimson Underwings were at Lydd-on-Sea on 22nd July, one in Essex plus singles at Greatstone (Kent) and Landguard NR (Suffolk), both on 2nd August.

The rarest micro moth was a Diplopseustis perieresalis at Southsea (Hants) on 28th July, only the eighth British record. Other scarce micros included another Conobathra tumida at Stubbington (Hants) on 1st August.

Further records of the rare plume Oxyptilus laetus came from the Forest of Dean (Glos), Weston-super Mare (Somerset) and Bishop's Hill (Warks). At least seven of the migrant tortrix Cydia amplana were counted at Hengistbury Head NR (Dorset) on 3rd, following one at nearby Burton and two at Pennington (Hants) the night before. The ones at Hengistbury Head were amongst oak and hopefully the species could start a colony there. Migrant Pyralid moths included six more Evergestis limbata, 14 European Corn-borers, a few Rush Veneers and many Rusty-dot Pearls. 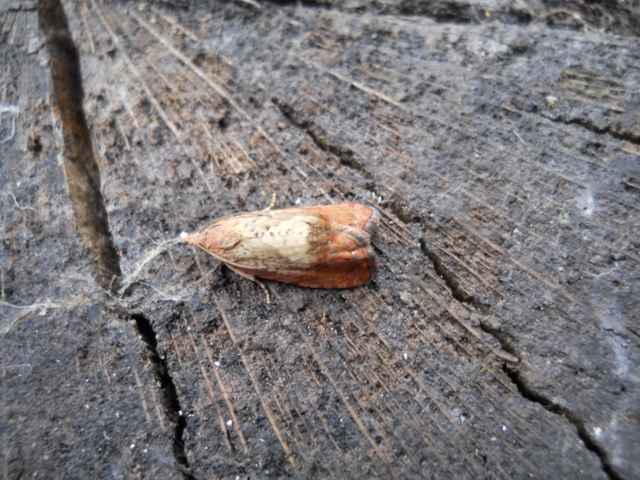 Following two cold winters it has been interesting to see how some recent colonists have fared this year, abundance wise. It appears that the advance of the Jersey Tiger has slowed a little but strong consolidation at known sites is evident. Good numbers have again been reported in Dorset, Somerset and West Sussex and it remains in the London area.

Tree Lichen Beauty have been reported from at least 10 sites this summer and Oak Processionary are still doing well in the Richmond area of London. Small Ranunculus and Toadflax Brocade have both reached north Cambridgeshire this summer. Other interesting movements include the first two Fen Wainscots for Northumberland, a few more East-Midland White Points and the first Reddish Light Arches in Worcestershire for 7 years.

After what seems to be many years of decline, the Garden Dart appears to have made a bit of a comeback this summer. Recorders have noted the species in regularly trapped gardens in Basingstoke (Hants), Morecambe (Lancs), Northamptonshire (five at two sites), Nantyffyllon (Glamorgan), two on Thanet (Kent), Woolpit (Suffolk) and Wyke Regis (Dorset). Let us hope that this upturn continues, as many moth-ers taking up the hobby in recent years still have not seen this moth. It remains quite regular in Durham and a delighted Northumberland-based Stewart Sexton added it to his Howick garden list in early August. 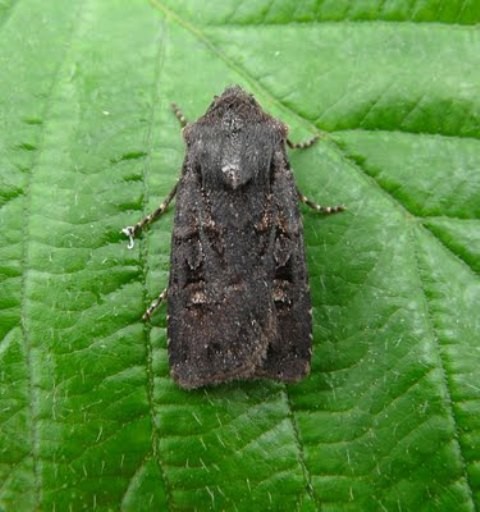 Migrant butterflies were few and far between. Clouded Yellows were seen at Seaford Head (East Sussex) on 30th July and Highworth (Wiltshire) on 7th August. A few Painted Ladies were also reported and with the warm weather at the end of July there were numerous Red Admirals. Although none were reported on mainland Britain, Large Tortoiseshells were in good numbers on the island of Sark (Channel Islands). Several Lesser Emperor dragonflies were observed at Dungeness over the period and others were noted at Blashford Lakes NR (Hants), nearby Moors CP (Dorset), at several Midlands locations and on The Lizard (Cornwall) at Windmill Farm NR where six Red-veined Darters had gathered by 14th August.