The effects on migratory bird populations of mid-latitude climate extremes, which are predicted to occur with increasing frequency in conjunction with global climate change over the coming decades, are not well understood. Improving our understanding of the effects of a full spectrum of environmental and ecological perturbations on migratory birds is crucial if we are to mitigate and implement conservation strategies to reduce the impact of climate warming on potentially vulnerable species.

A new study, published in the journal Ecosphere, attempts to address the implications of such climatic extremes on migratory bird populations in North America. Citing the extreme warming event experienced across North America during March 2012 and resultant lowering of productivity that season as an example, researchers set out to assess the effect of the episode on 353 bird species. 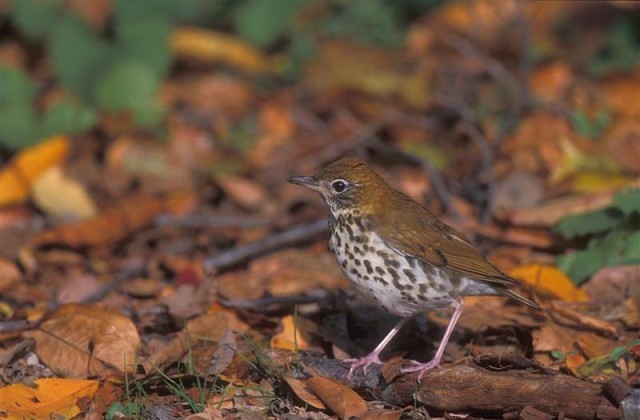 Long-distance migrants such as Wood Thrush are already declining in North America and it is feared that a greater frequency of climate extremes, driven by global warming, will only accelerate this (Photo: Lee Amery)

To do this, the scientists tested the predictions that: (1) short-distance migratory birds, due to geographic proximity and more flexible migratory behaviour, should advance their spring migration phenology; and (2) breeding populations, due to lower summer productivity, should have reduced occurrences. This was conducted by using data from the eBird database to calculate weekly occurrence anomalies for 2012 relative to the 2010–2014 average, focussing on species having unusually large positive occurrence anomalies during March 2012 and species having unusually large negative occurrence anomalies during July–August 2012.

As predicted, the results showed that mid-latitude climate extremes and associated ecological consequences broadly affected avian migration and breeding activities within the region. The findings suggest short-distance migrants are more flexible and resilient, whereas populations of long-distance migrants are at a distinct disadvantage.

If the frequency of mid-latitude climate extremes increases under climate change as predicted, the chances of migration or breeding activities being disrupted is likely to increase, therefore potentially putting long-distance migrants at greater risk of widespread population declines than their more resilient shorter-distance cousins.