Matthew Jackson: in the company of owls

Since I was young, my mum has always spurred me on to join her on walks near to home in the Wiltshire countryside. She’s always been quick to point out a Red Kite or Common Buzzard; impromptu finds like these brighten our walks and put a spring in our step. A regular route passes a spot on the horizon called Barbury Castle, an Iron Age hillfort that sits upon the skyline. This ancient site lies on a ridge that snakes across the countryside and towers high above all else. It can be found within the North Wessex Downs, an Area of Outstanding Natural Beauty, with green hills rolling off southward like tidal waves. To the north lies a few kilometres of countryside that gives way to the low-lying outskirts of Swindon, receding into the distance as an urban blue haze.

Back in 2020, while at work one day, my mum heard that owls had been seen up by the hill, and that they would only be around for a few weeks. I rapidly pulled out my phone to check, and up came several headlines stating that Short-eared Owls had appeared at Barbury Castle for the winter. Both with busy schedules, we co-ordinated the best day to set off. Feeling that time was of the essence, we agreed to dash up on the next afternoon after work. With a last-minute addition of my dad, the three of us drove out onto the downs but saw only empty skies. We walked along the hill in the cold for hours to no avail, as the sky began to darken into a deep navy. More than a little put out, we returned home and thought we were too late.

Days later, I had some free time and decided to cycle out to the castle alone, as the weather had become a little milder and I needed to get out the house for a bit. Unbeknown to me, the owls met me there! Two large birds with flat faces and impressive wings, gliding along the edges of the hillfort, making long swooping flights and tracking across the adjacent meadow. I parked my bike and stayed a while, joined by a few birders with huge lenses tapering off their cameras. I had never seen any bird quite like it: thicker and heavier set in the body than any bird of prey I had witnessed, but with expert control and grace, with very grand and deliberate movements in the air. 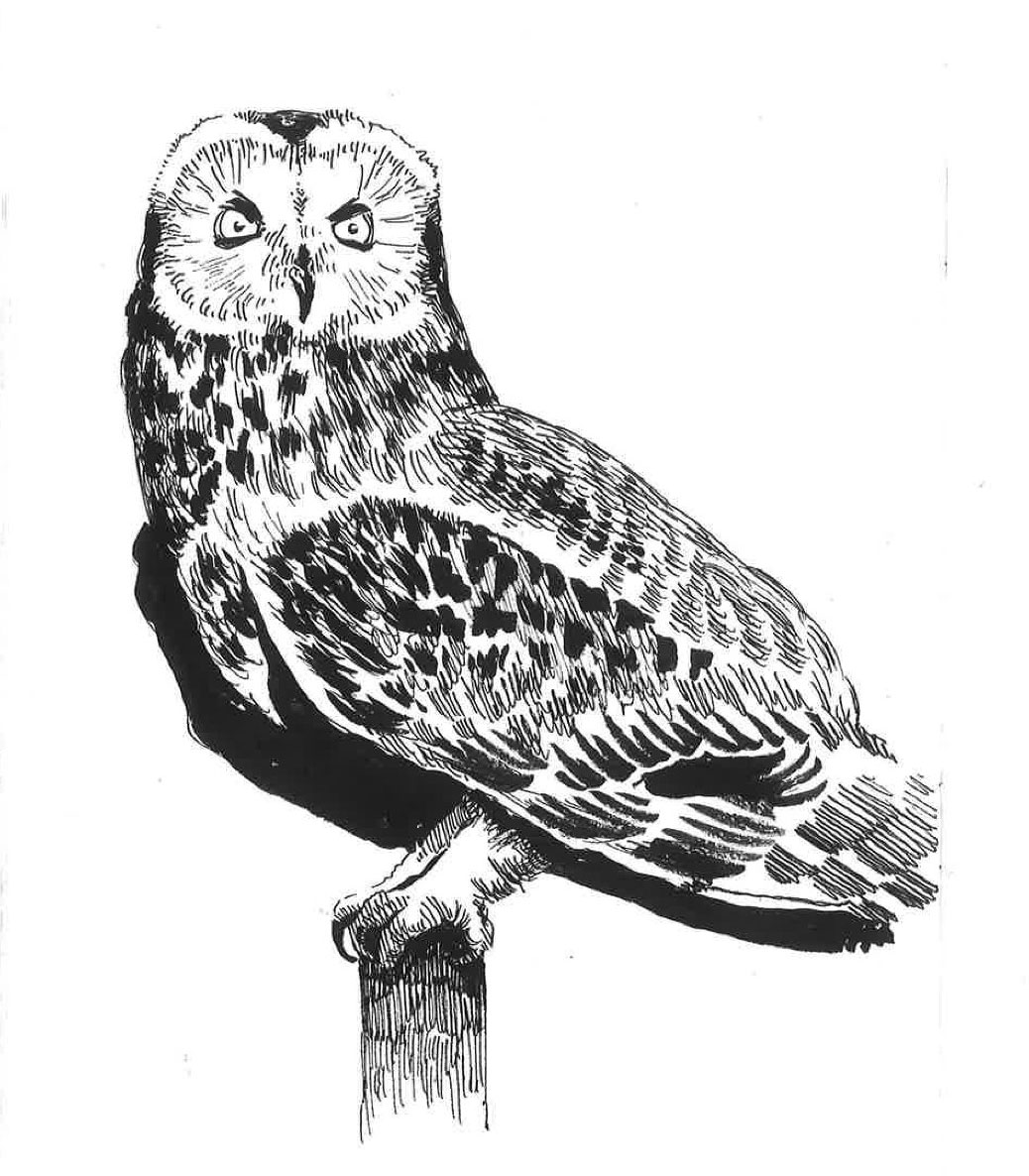 Matthew's owl encounters inspired him to put pen to paper and produce this illustration.

With the grassy, rolling downs stretching out beyond, the owls had a mysterious quality to them, like something out of the Harry Potter films I enjoyed so much as a child. As the day grew shorter, the wind picked up and I was underdressed in a T-shirt and shorts, so fearing catching a cold, I was forced to head off home.

Later that afternoon, just on the cusp of the evening, my mum returned late, and we sat down to dinner. Feigning a cool, calm and collected attitude, I informed my parents of my little excursion, and of the pleasant surprise I found atop the hill. My mum, mouth agape, could not believe it. She was beside herself. We quickly finished dinner, and packed into the car, eager to catch the owls before it was too dark.

Parking at the bottom, we scrambled up the side of the hill in record time. The birds had not left. My parents made sounds of awe as over on the other side of the castle we could just glimpse a dark brooding form stood upright on the far fenceposts. Time stopped and for a few minutes we were consumed with child-like wonder. We stayed until the night dictated that we withdraw, barely able to see anything against the darkening sky.

It was one of the most enjoyable wildlife experiences I have had and I do not think I can truly convey the feeling it gave me into words. Since then, I have not been able to make a return trip due to being caught up with studying, work and other commitments. But in those gloomy lockdown afternoons, I experienced something that will likely stay with me for many years to come.