MARCH will see the first Little Ringed Plovers arriving on the fringes of water bodies in England, Wales and, later, southern Scotland. However, the similar though somewhat more maritime Ringed Plover will also be present on many of the same muddy and pebbly edges. How can you tell them apart?

Even without close scrutiny, spring will see Little Ringed Plover especially being vocal and ostentatious, performing its slow-flapping display flight like a giant butterfly or bat, and chasing rivals around potential habitat with loud harsh prree calls. This contrasts with its more usual pee-oo vocalisation, as well as with Ringed Plover’s poo-eep or peep sounds. The latter also has a quieter, more ground-based display involving the horizontal flattening of its body and tail and raising of the wings.

Both species can share gravelly habitats for breeding, even inland. Little Ringed is a more slender, slightly longer-legged bird with a bright yellow eyering, an all-black beak – bar a small amount of yellow at the base of the lower mandible – and a white line above the black-and-white forehead, as well as the black lores that both species have.

The stockier Ringed Plover has thick, bright orange legs as opposed to Little Ringed’s twig-like dull pink. Ringed also has a much thicker black breast band and an orange base to its black-tipped beak.

In flight, the two are hard to confuse, as Ringed Plover has an obvious thin white wing-bar stretching onto the primaries, whereas ‘LRP’ has a very faint secondary bar at most. Both have white outer tail feathers, but these are more apparent in Ringed. 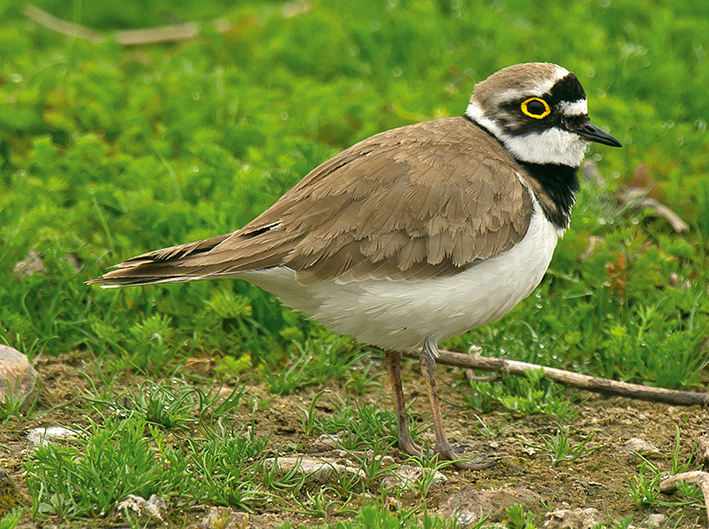 Little Ringed Plover (Seaforth, Lancashire, 24 May 2010). Though more slender than Ringed, ‘LRP’ can appear chubby when its feathers are fluffed up. Note the prominent yellow orbital rings, white line over the forecrown and all-dark bill. Photo: Steve Young (www.birdsonfilm.com). 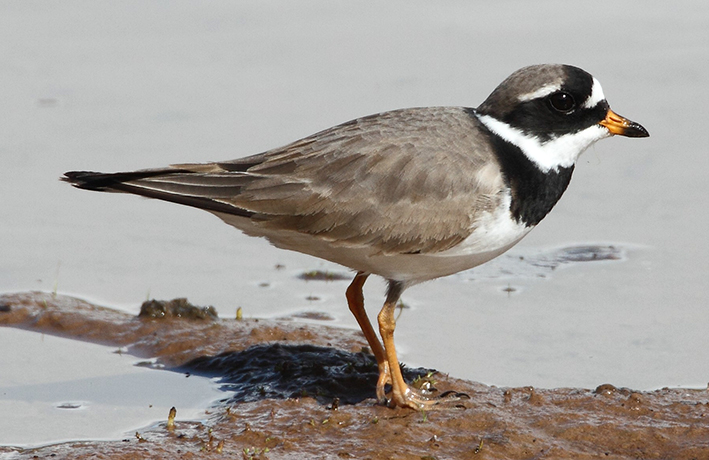