Fast-flying and often at a distance, identifying shearwaters can present a challenge – but the rewards may be great. Manx, Balearic and Yelkouan Shearwaters are similar-looking brown-and-white seabirds; the first is the default in British and Irish waters, but Balearic is a regular visitor to our waters and Yelkouan, while a mega find, is a possibility. Bob Flood has all the advice and information you need to recognise these three closely related species should you encounter one from a headland or on a pelagic. 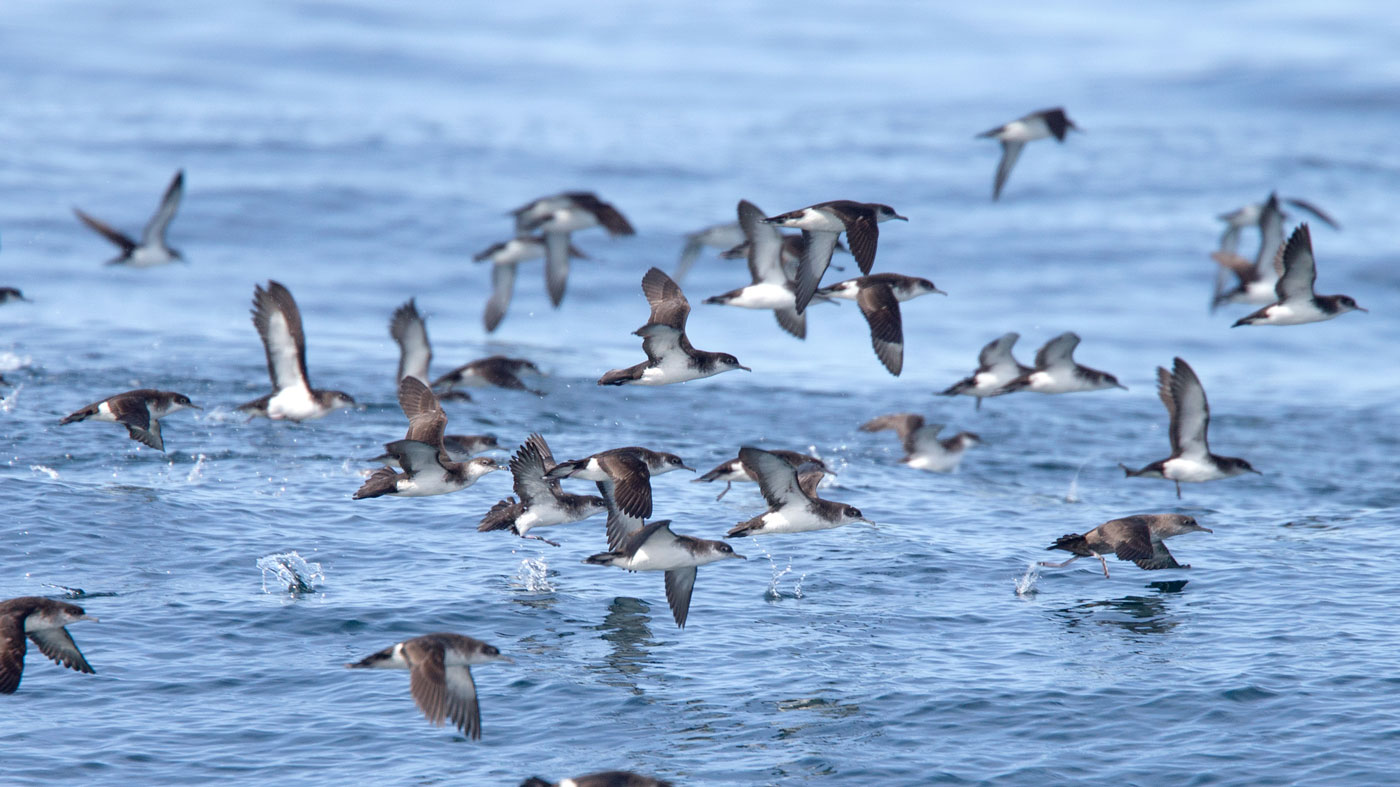 Not long ago this trio was lumped together as one species. That is hard to understand when watching an 'all-dark' Balearic flying alongside a 'bicoloured' Manx or Yelkouan (dark upper side, white underside).

However, replace that dark Balearic with a pale individual, the underside being whitish, and immediately ID becomes a lot harder. And replace the fresh, greyish-black upper side feathers of Manx with old, sun-bleached, browner ones, the colour being more like Balearic and Yelkouan, then it becomes harder again. Add distance, as with shore-based seawatching, and the challenge is one of the toughest of all for seabirders. That said, most birds can be identified with confidence given reasonable views and command of the knowledge set out below.

The ubiquitous shearwater of our region, with perhaps 400,000 or more pairs breeding from Iceland in the north to the Canary Islands in the south, but mainly in Britain and Ireland. Conservation programmes are behind a recent significant population increase. Most Manx undertake an epic post-breeding migration to the South Atlantic, arriving from September when the moult of flight feathers commences.

Manx is larger and more thickset than Yelkouan, smaller and not as chunky as Balearic. It has a strong and well-balanced build and can show a short toe projection. Manx has the least amount of dark markings on the underside; Balearic has the greatest. Thus, Manx shows high contrast between a greyish-black upper side (bleaches browner) and clean-white underside. The under primaries are dark grey in high contrast with largely white underwing-coverts.

This species has a distinct whitish crescent behind the ear coverts and obvious white saddlebags (white feathers that wrap over from the underside onto the upper side to the rear of the wings). The undertail coverts are clean white, some birds have light barring on the flanks, and about 5% have heavier flank barring and an axillary bar.

Critically Endangered, this species breeds in the Balearic Islands, with a population of 10,000-22,000 birds and an estimated time to extinction of about 60 years unless greater conservation action is taken. Post-breeding, June to August, there is a mass exit into the North Atlantic, most northbound, from offshore Portugal to north-west France and south-west England, moulting flight feathers from late May to mid-September.

The chunky Balearic design reflects its relatively short-distance movements. Seen alongside Manx, the flight of Balearic is effortful, direct with limited gliding, remaining low over the water, while the show-off Manx eases ahead of it, effortlessly rising and descending. Even in strong wind, Balearic struggles with gravity, rarely achieving more than short, shallow glides. Balearic is not a flying virtuoso.

Balearic has a relatively thick-based bill, drawn-out face, mid-sized head, thick neck and a full body with plump belly and broad hips, giving an oddly bulky rear-end. It has an obvious toe projection. Be aware that juveniles are not as heavily built as adults.

Balearic occurs in pale to dark plumages with a full range of intermediates. Here, we focus on the palest 15% of birds. Pale Balearic are not truly bicoloured, having a gradual transition between a mid-greyish brown upper side and whitish underside, and at most there is a hint of saddlebags. A faint dark neck collar occurs in some birds, unlike Yelkouan. The under primaries are dark brownish-grey in moderate contrast with whitish underwing coverts.

The species' population is considered stable, with about 22,000-33,000 pairs breeding in the Mediterranean Sea, from France and Algeria in the west to Greece in the east, and also suspected in Turkey and the Black Sea. Post breeding, birds in the west move to coastal regions off north-east Spain and North Africa, while many birds in the east move to the Black Sea through the narrow Bosphorous Strait, moulting flight feathers from mid-July to November. Yelkouan reaches the margins of the North Atlantic annually, with sightings in the Strait of Gibraltar and Gulf of Cádiz, but nobody knows if birds regularly, scarcely or only rarely move into the main body of the North Atlantic.

Yelkouan is designed for relatively short-distance movements. It doesn't labour in flight like the heavier Balearic, though it lacks the deftness of Manx. Knowledge of Yelkouan flight is largely limited to calm Mediterranean days when birds fly low to the surface, propelling themselves forward with limited gliding. Flight behaviour in oceanic gales lashing south-west England is unknown.

Yelkouan is notably small alongside Balearic. It has a small head and short forehead that drops quite steeply to the bill. The 'head, neck and back' are structurally distinct parts due to a narrowish neck. It has a slimmish body and an obvious toe projection.

Yelkouan shows high contrast between a dark greyish-brown upper side (bleaches browner) and whitish underside. It has a spectacled appearance, an indistinct whitish crescent behind the ear coverts and smallish saddlebags. The under primaries are mid-grey in moderate contrast with largely white underwing coverts.

The undertail coverts range from mainly whitish resembling Manx, to all-dark, and on some birds the dark extends onto the sides of the body. About 65% of birds have a narrow dark flank bar and an axillary bar, 5% are more heavily marked, while 30% are more lightly marked.

The great majority of successful breeding Manx moult flight feathers from September after migrating to the South Atlantic. A bird moulting its flight feathers off Britain and Ireland between May and August therefore merits scrutiny. Be aware, though, failed breeder and 'teenage' Manx checking out colonies for future years may commence moult earlier than September in the North Atlantic.

Thanks to Marcel Gil-Velasco for helpful discussions on this topic. 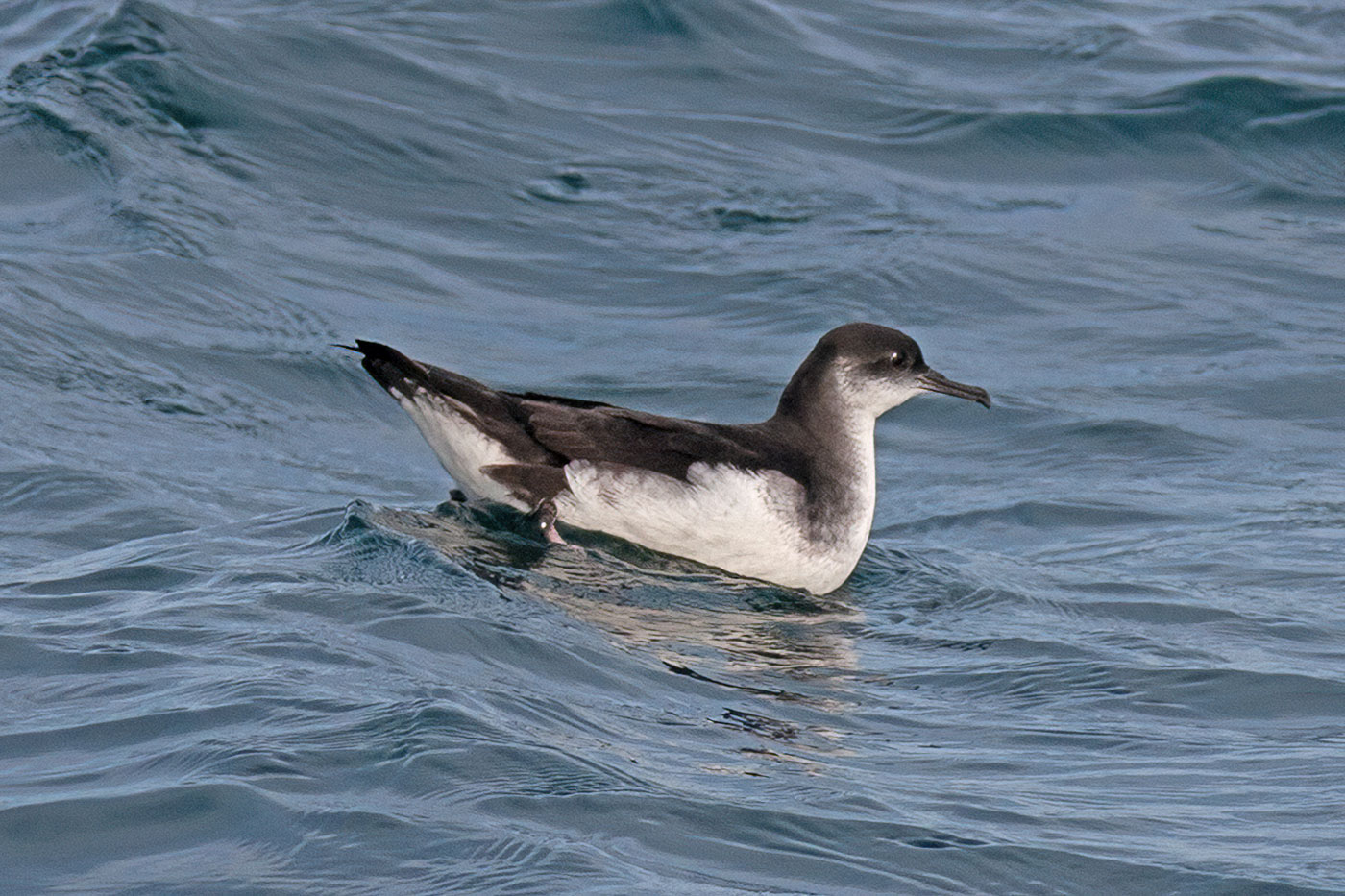 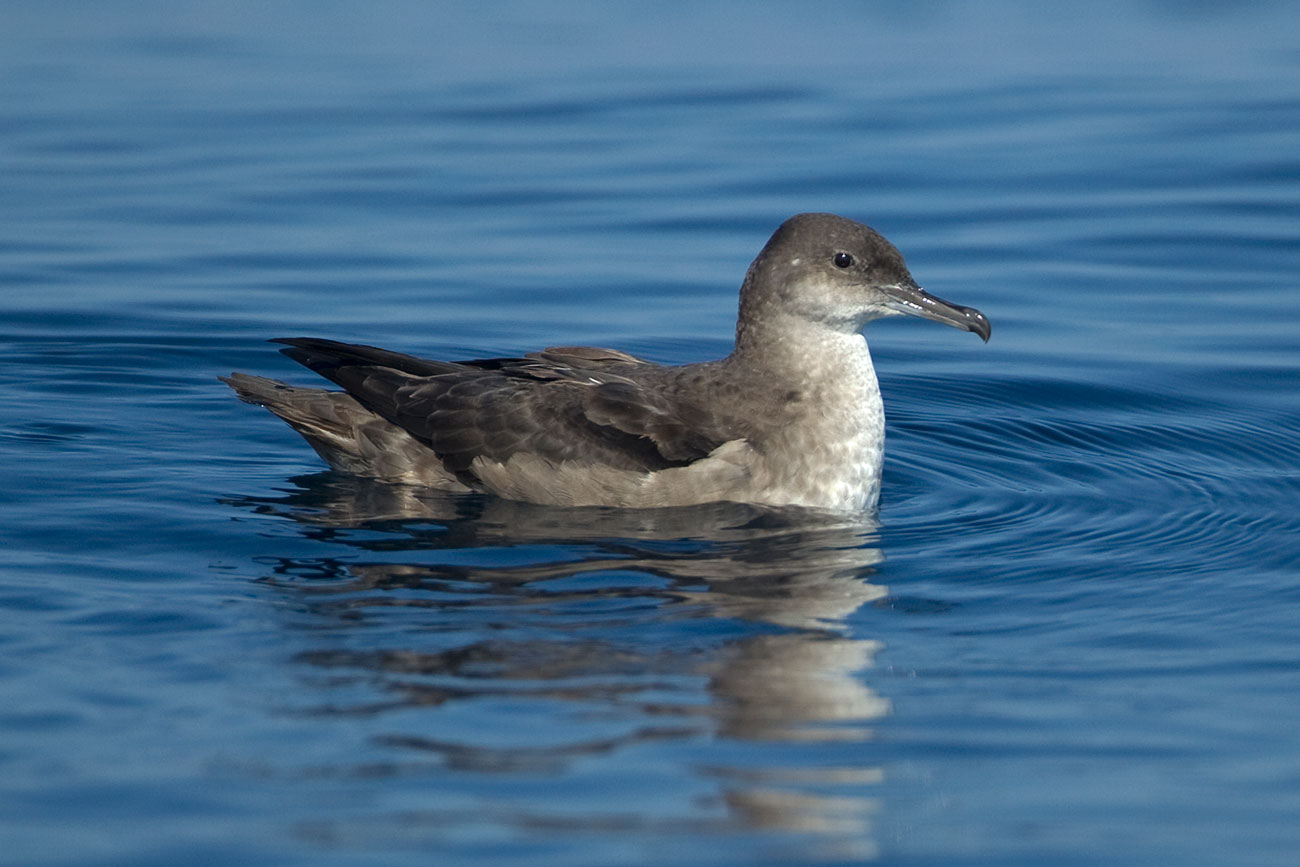 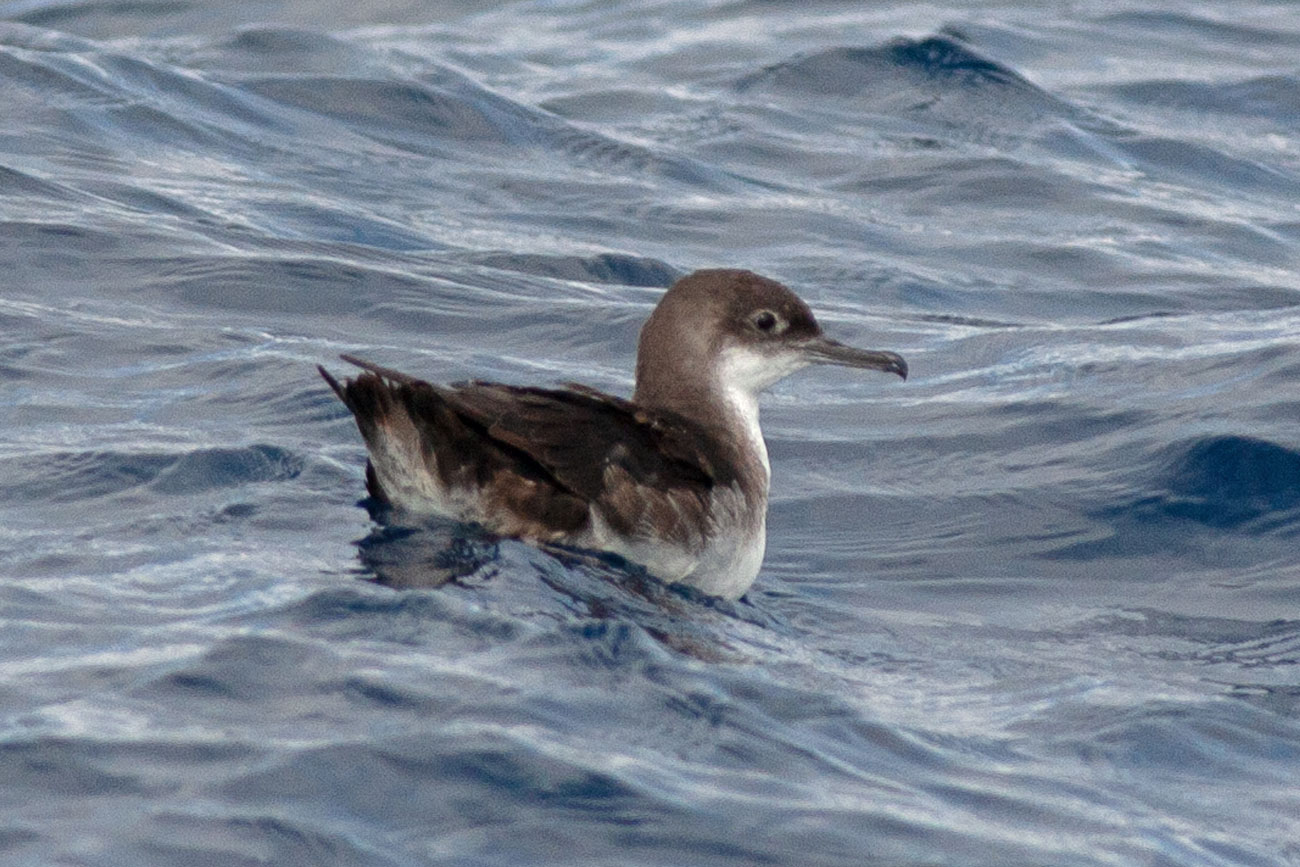 Yelkouan Shearwater (L'Estartit, Spain, 11 September 2011). Note the dark greyish-brown upper side, spectacled appearance and restricted pale crescent behind the ear coverts. As here, about 20% of birds have whitish undertail coverts with dark tips mainly to the longest ones, but even the palest Balearic is more heavily marked than this individual (Ashley Fisher). 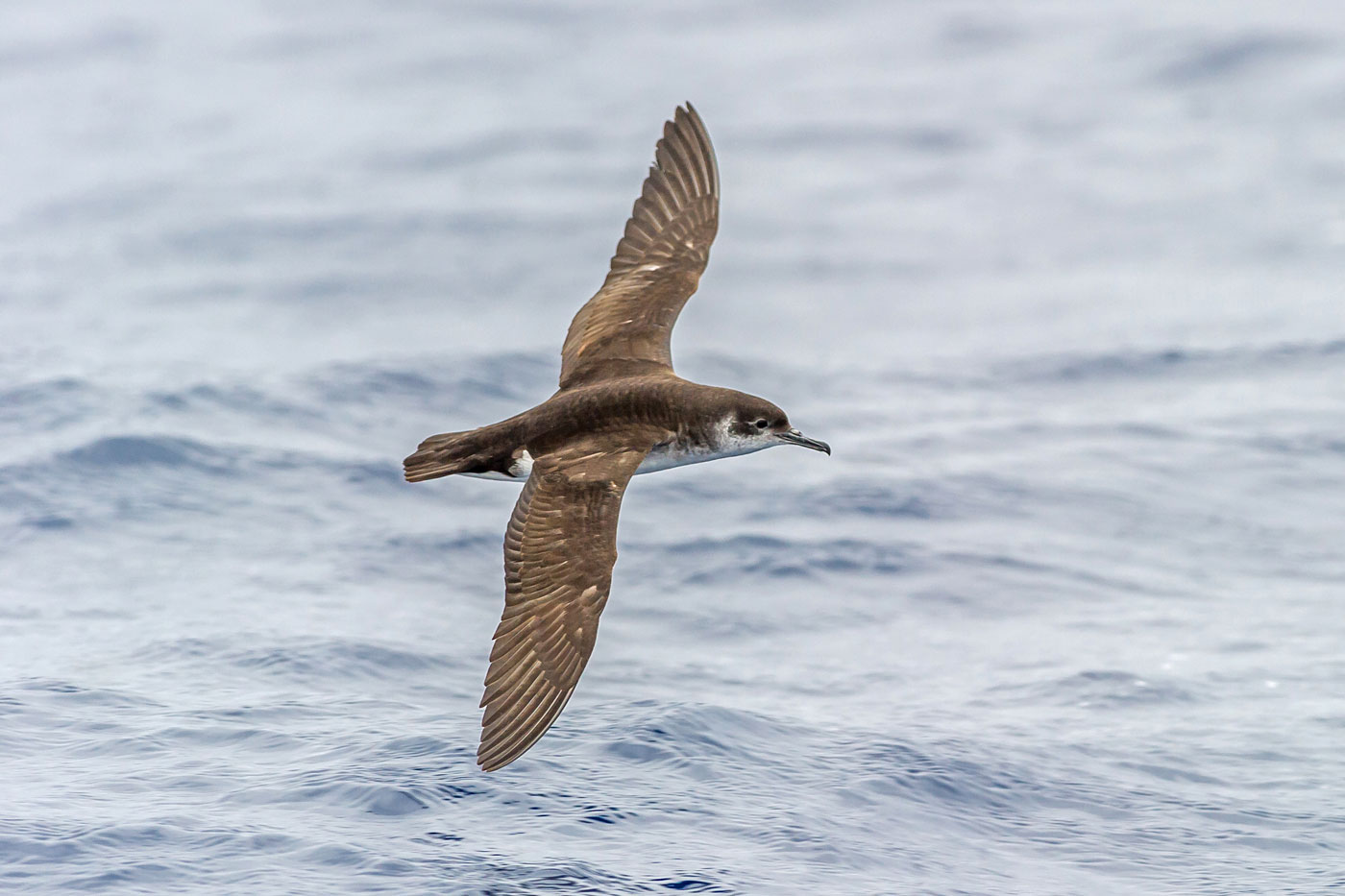 Manx Shearwater (Madeira, Portugal, 23 May 2011). Note the upper side is bleached giving a browner appearance than fresh plumage. This bird has a distinct whitish crescent behind the ear coverts, but only small white saddlebags. It is strongly built with long narrowish wings and, along with most Manx, lacks a toe projection (Kirk Zufelt). 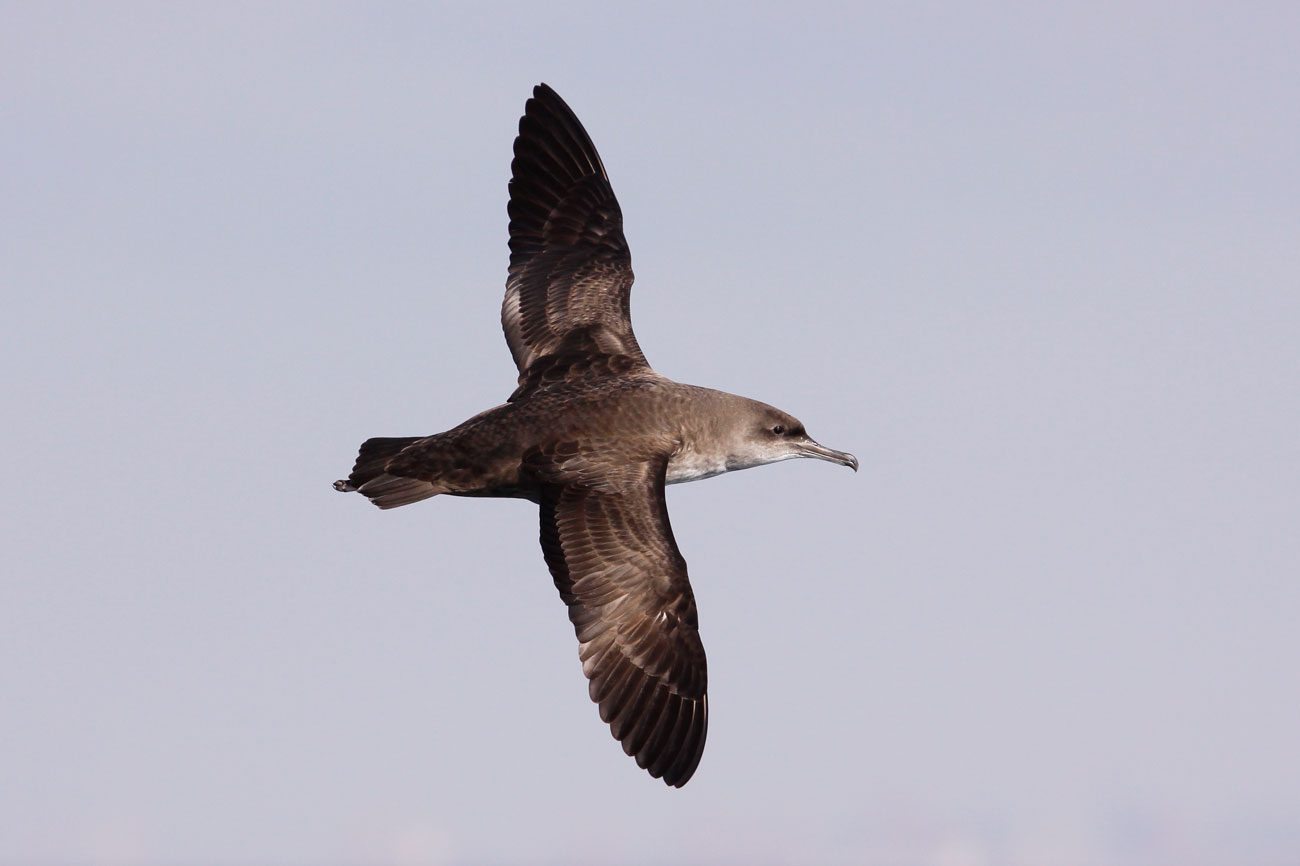 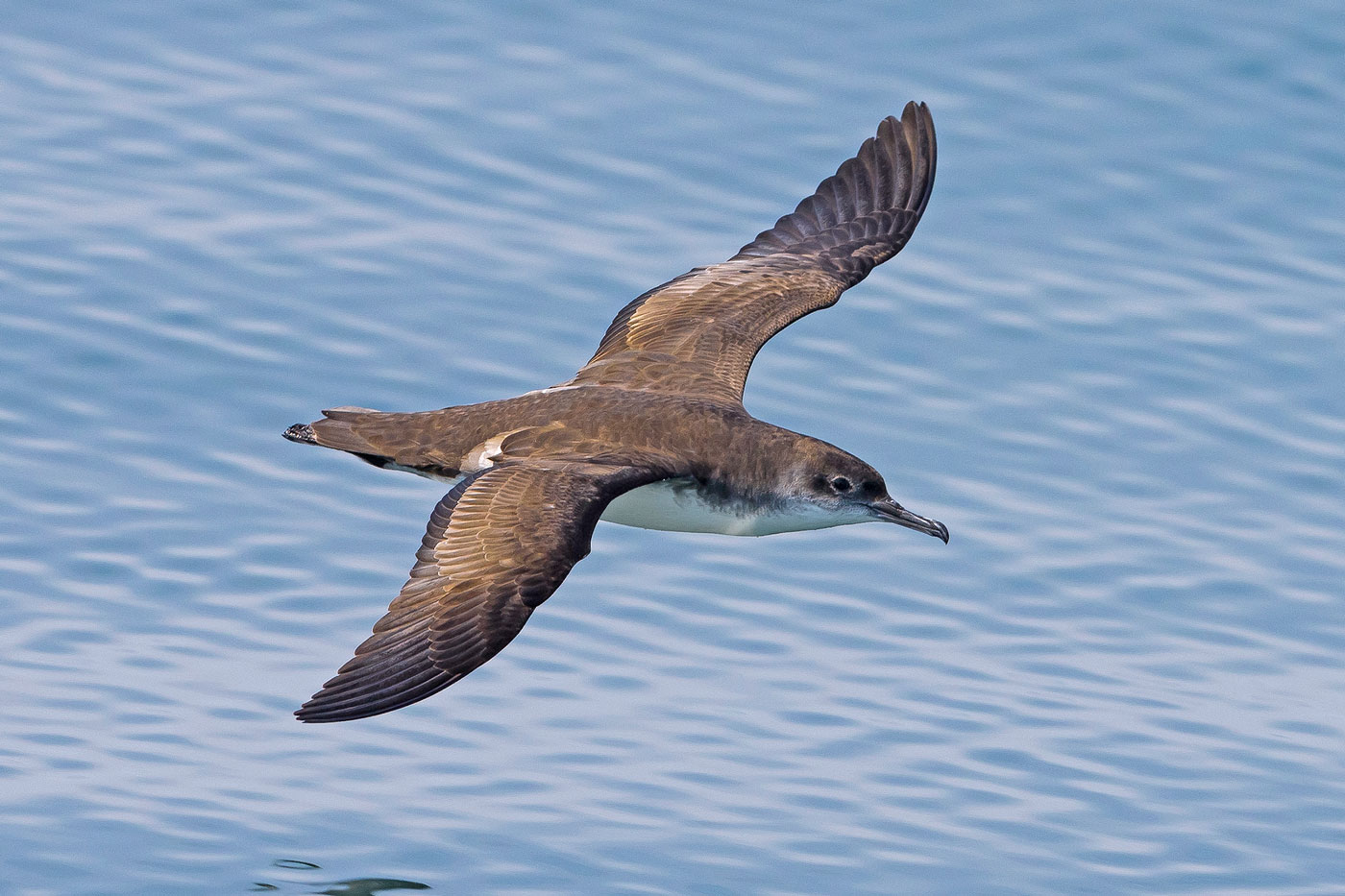 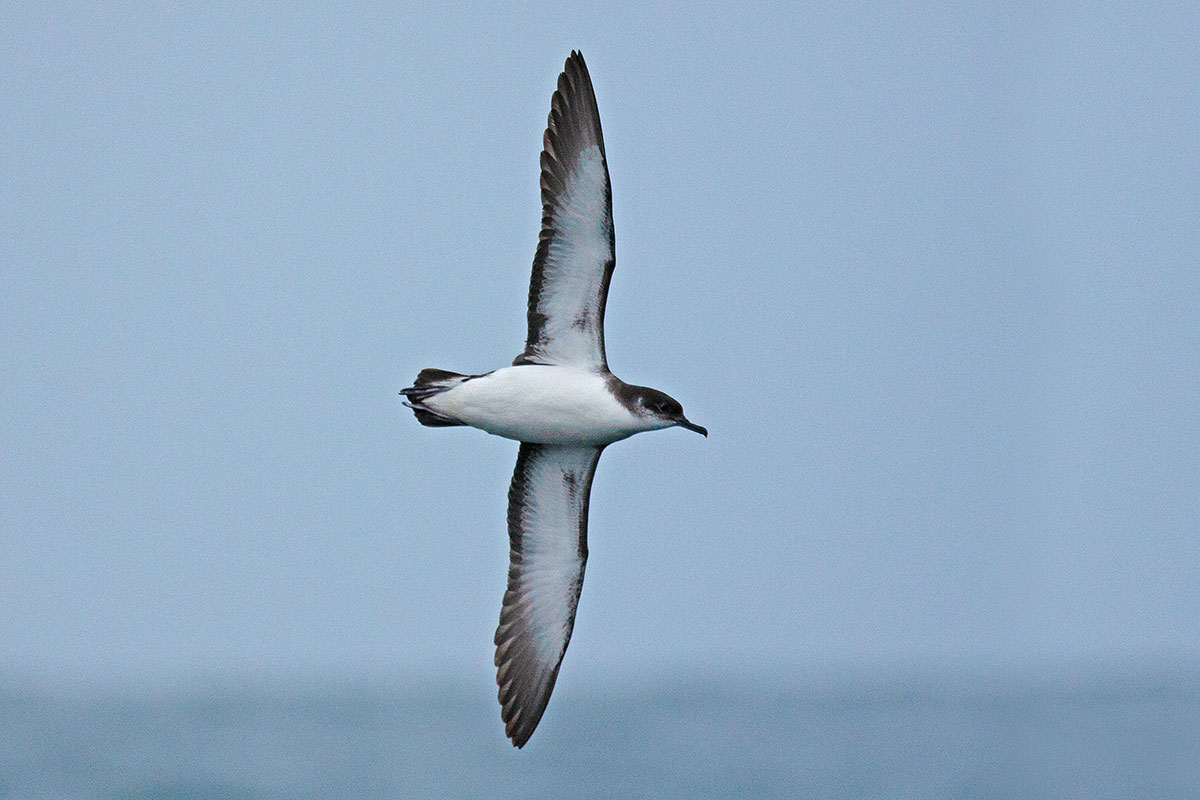 Manx Shearwater (Scilly, 25 August 2008). Note the strong build, with long narrowish wings and, as occurs in a minority of birds, a short toe projection. The under primaries are dark grey in high contrast with largely white underwing coverts. This bird lacks axillary and flanks bars and the undertail coverts are clean white, eliminating Yelkouan (Ashley Fisher). 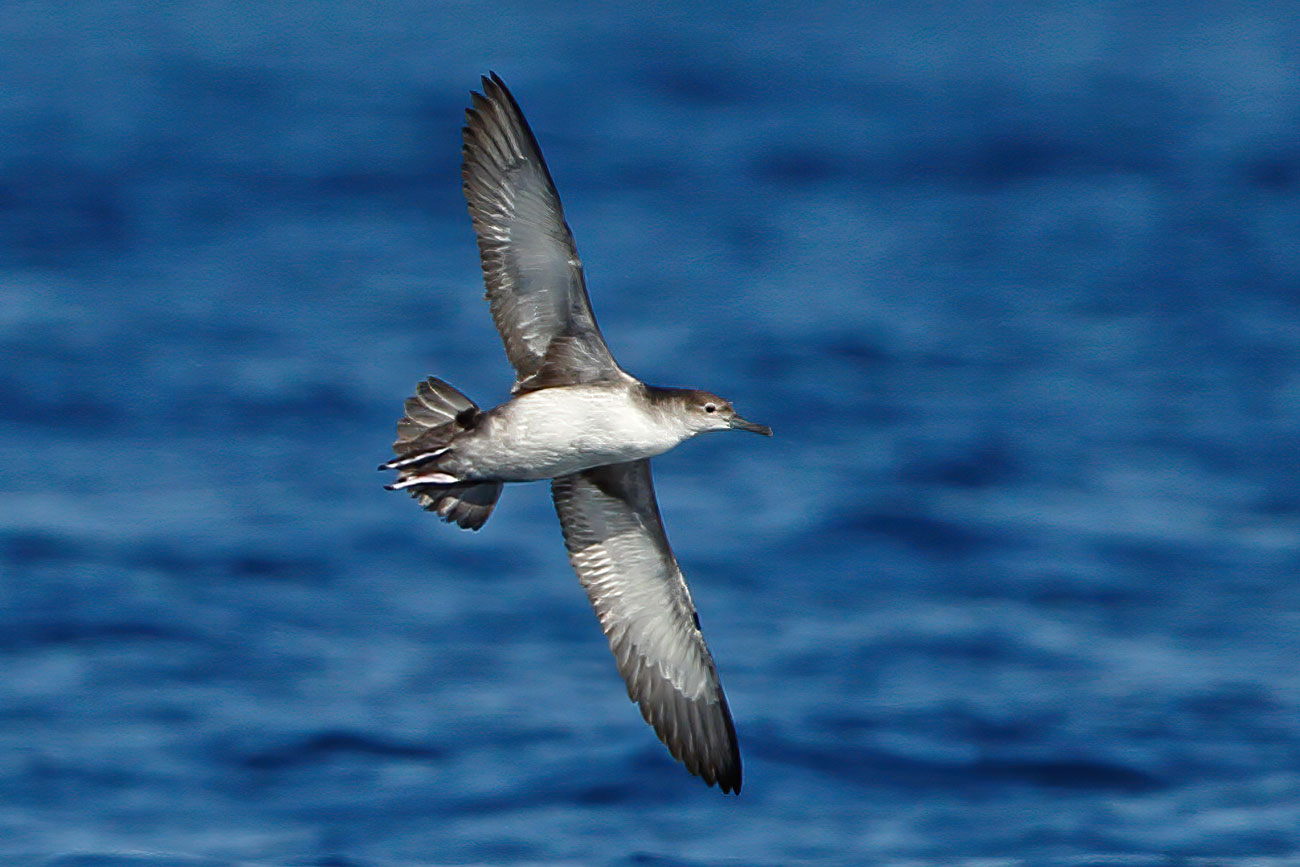 Balearic Shearwater (Algarve, Portugal, 2 August 2016). Although this is a pale Balearic, dark markings in the underwing and undertail coverts are too extensive for Yelkouan. It has a thickish flank bar, a very thick axillary bar and quite heavily marked lesser secondary coverts. Dark thigh patches merge with a brownish wash in the ventral region, and the undertail coverts are dark. The under primaries are dark brownish-grey in moderate contrast with whitish underwing coverts. Also note the relatively thick-based bill, full body with plump belly and broad hips, giving a bulky rear-end, and an obvious toe projection (Helge Sorensen / www.agami.nl). 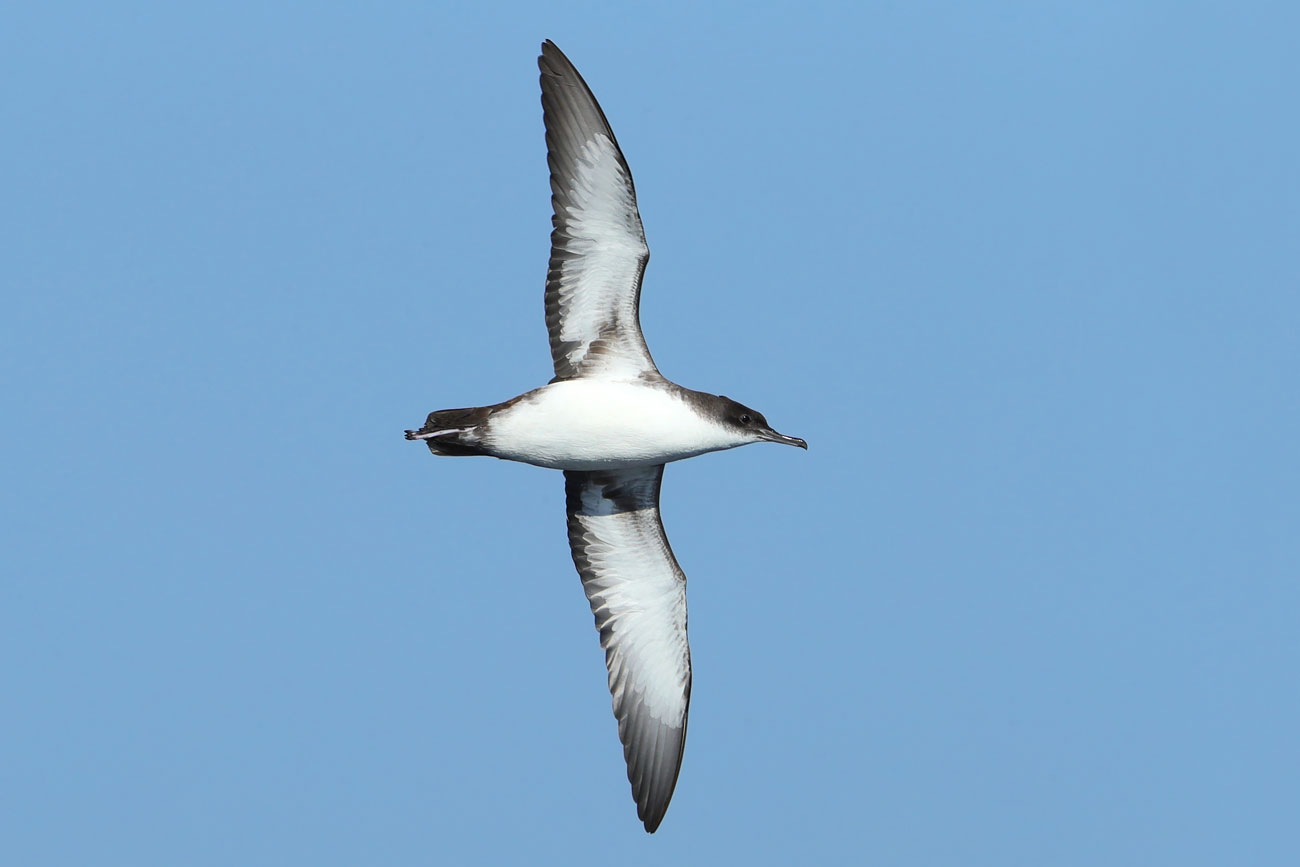 Yelkouan Shearwater (Hyères, France, 8 January 2014). Note the moderate contrast between the mid-grey under primaries and largely white underwing coverts. Undertail coverts are mainly dark and this extends slightly onto the sides of the body. There is a complete axillary bar and evidence of a narrow dark flank bar, apparently broken in the centre. There is an obvious toe projection (Aurélien Audevard). 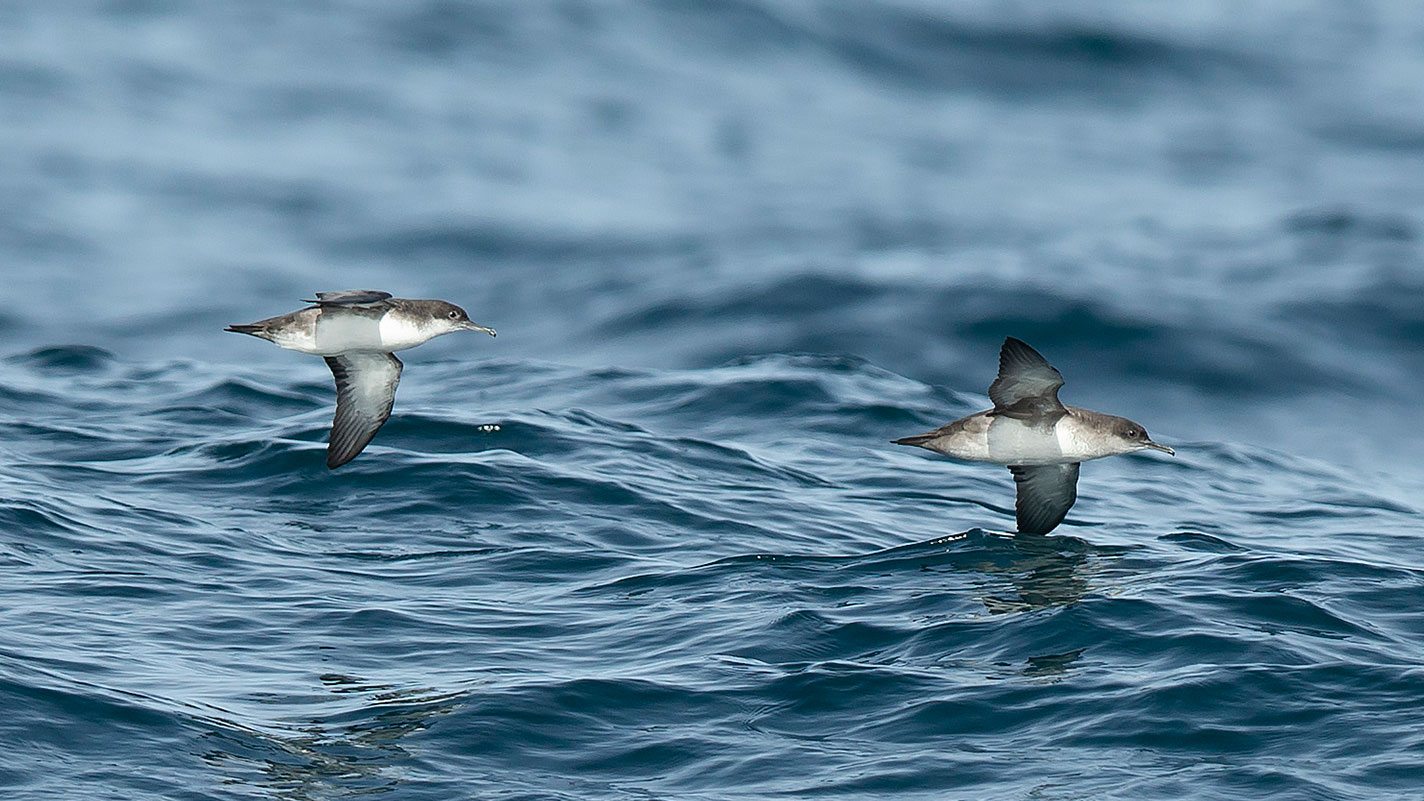 Balearic Shearwater (Scilly, 2 October 2019). Not all birds are straightforward. The right-hand individual is a clear-cut pale Balearic with a bulky rear-end. The left-hand bird caused alarm bells to ring when it flew past our boat. It is slimmer, the 'head, neck, and back' appear to be structurally distinct parts, and there is a hint of a crescent behind the ear coverts, all suggesting Yelkouan. However, the bird has a thickish flank bar and bulky rear-end. We concluded that this bird is an extremely pale Balearic. However, Balearic/Yelkouan hybrids breed on Menorca in the Balearic Islands and this bird could be a 'Menorcan Shearwater' (Joe Pender).