On Saturday 28th August 1982, Tom Francis and John Dunnett independently found a small wader at Saltholme Pool, Cleveland. Given the hindrance of heat haze and a shortage of time, the observers prematurely identified the bird as a juvenile White-rumped Sandpiper based on the white rump that both thought they had seen. A number of other observers agreed with the identification and the observers left the site.

Dunnett returned that evening and with better views he was perplexed by the bird's identity, as it clearly did not have a white rump and was markedly smaller than the Dunlin accompanying it. The bird could not be relocated on the following day, but Dunnett began to believe that the bird was a Long-toed Stint. The following day the bird was again present and news was released onto the grapevine (no mobiles, pagers and websites then!). This enabled large numbers of birders to travel to see a species that many had not even heard of, let alone knew how to identify. Fortunately it remained on Saltholme Pool until the 1st September and was exceptionally confiding, as the accompanying photographs by Simon Warwick testify. It was in due course accepted as a species new to Britain and Ireland and a full account is published in British Birds, Volume 85: 431-436. 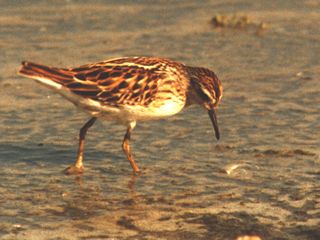 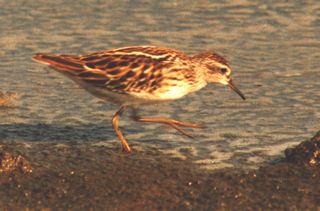 Long-toed Stints breed in Siberia and winter from India through Southeast Asia to Australia; this lengthy migration makes them ideal candidates for turning up in Western Europe. Interestingly, the occurrence of this bird coincided with Britain and Ireland's first Little Whimbrel at Sker (Glamorgan) from 30th August-6th September 1982. Wader buffs were able to travel to see two species in a matter of days that few birders had seen, few had heard of, and both were species new to Britain and Ireland. The black ink at the end of many a personal list was no doubt testimony to the gross rarity of both species and the Long-toed Stint provided the impetus for many a budding lister to become gripped by the excitement and mystery of vagrancy. Nowadays, both are eagerly desired vagrants for newer generations of birders. Both will no doubt turn up again, but the nostalgic amongst us no doubt look back through rose-tinted spectacles on the naivety of the birding scene 20 years ago.

Subsequently it came to light that there was an earlier British and Irish record of Long-toed Stint. The first record had a controversial entry onto the national archive. It was found at Marazion Marsh (Cornwall) on 7th June 1970 by Philip Round. At the site he noticed a small, yellow-legged stint and together with Ron Johns, they watched the bird for two hours, but were unsure as to its identity. Returning the following day they were able to photograph it and concluded that it was a Least Sandpiper, which was accepted by the British Birds Rarities Committee (BBRC). Subsequently, Round became sure that the bird had been wrongly identified, especially after seeing Long-toed Stints and in 1979 wrote to the BBRC to inform them of the correct identification. Eventually the BBRC (in 1994) and the BOU (in 1995) agreed with Round and the record was reinstated as the first for Britain.

There have now been three records of Long-toed Stint in Britain and Ireland, with a third found at Ballycotton (Co. Cork) from 15th-16th June 1996. However, the Saltholme bird remains many birders' introduction to twitching and occurred during a purple patch for rare waders.