IT hasn’t been long since Pink-footed Goose was split from its close relative bean goose, and that the latter was split into the even more closely related Tundra Bean and Taiga Bean Geese. Despite fairly clear differences, all three can be confused in the field, particularly at a distance and refined judgements of bare part colour and bill shape are required to nail them.

All are roughly the same size and shape, but Pink-footed Goose is the default small grey goose in a British context. ‘Pinkfoot’ has a short, brown neck feathering which contrasts with its paler brown chest and belly and blue-grey frosted upperparts and wings. The black, almost triangular bill has a dull pink subterminal band, and birds generally have obviously pink legs and feet. Juveniles are less well-marked and have less frosting, making them look more uniform in a distant flock. In flight, the broad white tips to the tail feathers and broad, curved white rump stand out, and these can sometimes be observed in standing birds.

The snub-nosed appearance is also apparent in Tundra Bean Goose, but both bean geese appear darker on the back and have white fringes to the upperparts feathers. Tundra has a small orange patch near its bill tip, and both beans have orange legs, though distance and mist can make this harder to see; its dark neck has less contrast with the body than in Pink-foot. Flying bean geese have more dark than white on their tails, and darker upperwings due to the minimal light frosting compared to Pink-footed Goose. Tundra is usually found in single-figure flocks, often among Pink-footed Goose. Juvenile bean geese are also plainer and darker than the adults. 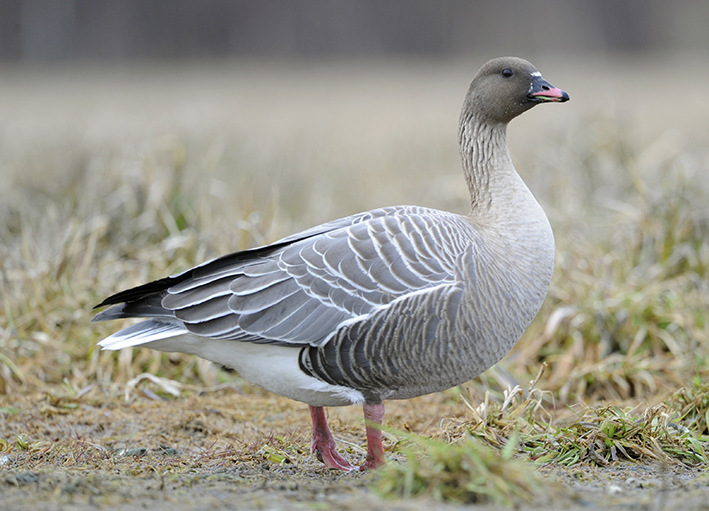 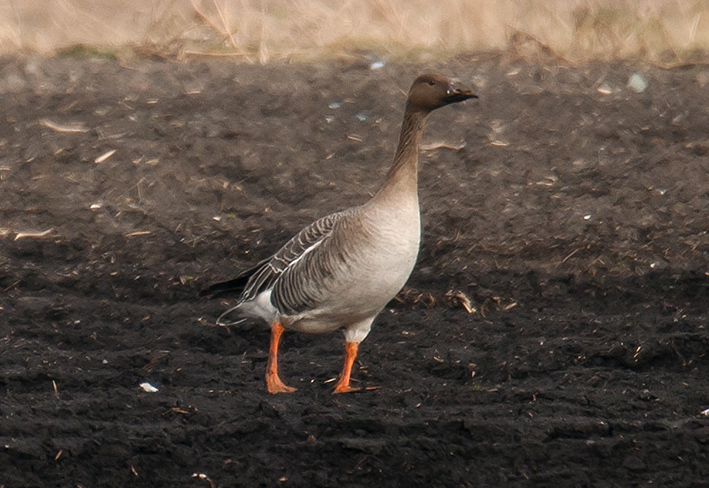 Tundra Bean Goose (Plex Moss, Lancashire, 9 March 2010). Superficially resembling
Pink-foot, Tundra Bean has orange coloration to its bill and limbs, rather than pink,
as well as no ‘frosting’ on the upperparts. Photo by Steve Young (www.birdsonfilm.com). 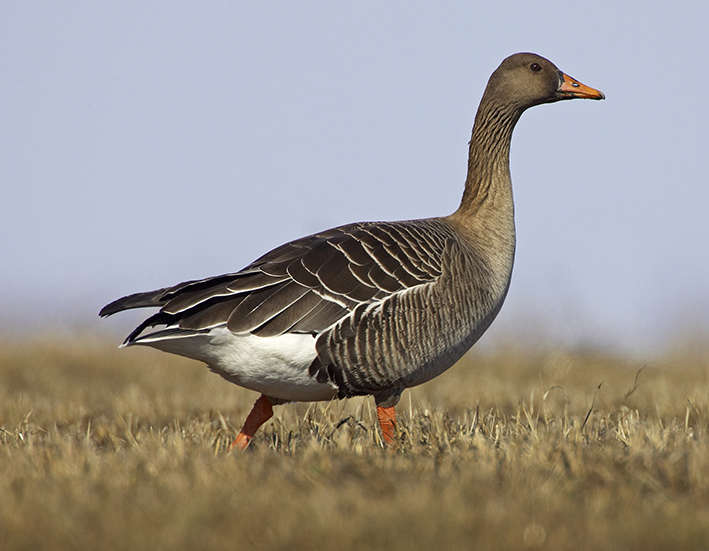 Taiga Bean Goose (Oulu, Finland, 19 April 2005). Taiga Bean is a larger, more
Greylag-like bird, with a longer bill that shows a larger orange patch than Tundra Bean.
It is rangier and browner overall than Pink-foot. Photo by Jari Peltomaki (www.naturephoto.fi).
Login to leave a comment
Return to List