Starlings are among the most well-known of birds in Britain – they are widespread, though declining, as a breeding bird in parks in towns and cities and they form huge flocks in winter. Starlings are commonly seen on the ground when they feed, perched on wires or in flight, offering a view of triangular wings and a mostly black bird (in spring and summer) or black with whitish spots (in autumn and winter). They are very vocal, and are expert at imitating the songs of other species, and even human-derived sounds like traffic and alarm clocks.

Only two species occur in Britain, Common and Rosy Starlings: the former is a numerous resident and winter visitor, the latter a scarce visitor occurring mainly in mid-summer and autumn. A third species, Spotless Starling, has not yet been recorded, but is a conceivable future addition to the British list. 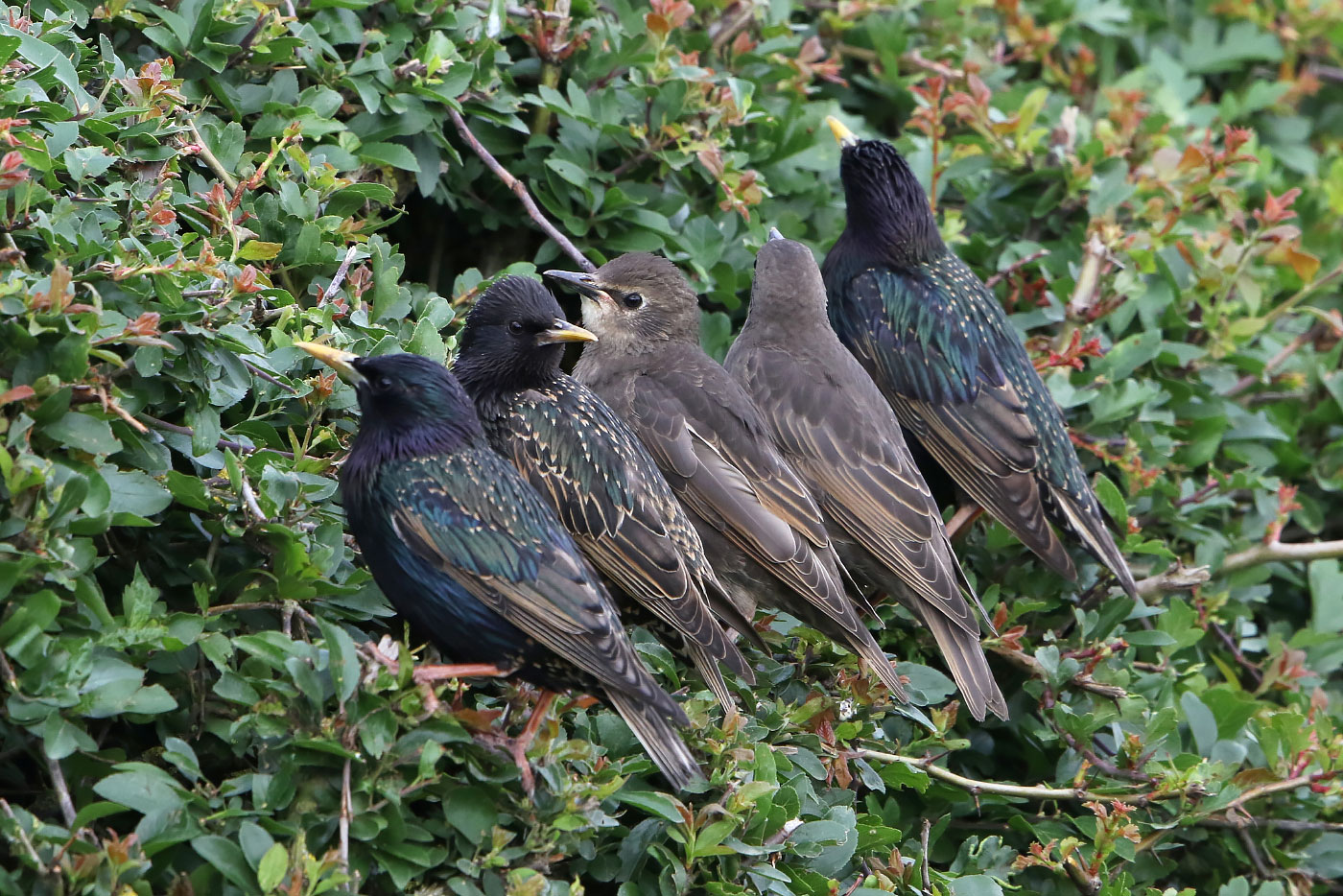 Adult and juvenile Common Starlings (Polemere NR, Shropshire, 5 June 2018). In early summer it is easy to find mixed flocks of adult breeding Common Starlings along with juveniles. Note the uniform brown upperparts of the juveniles (third and fourth birds from left) compared with the blackish adults which have paler feather tips on the mantle, scapulars and uppertail coverts (first, second and fifth birds from left) (Jim Almond).

This species has a large breeding distribution across Eurasia, from Iceland east to Central Asia, Siberia, Mongolia, north-west China and Pakistan. It has been introduced to North America, South Africa, Australia, New Zealand and Polynesia. In winter it reaches North Africa, Arabia and north India.

It is by far the most likely starling species to be encountered in Britain. However, it can appear very similar to Spotless Starling. In spring and summer, adults are most easily distinguished as they are still spotted, with a metallic gloss of green and purple, dull pink legs, and a subtly longer and thin-based bill. In autumn and winter all ages and both sexes are profusely spotted. Males in summer plumage show more gloss and smaller spots than females.

Juveniles are dull brown without pale feather tips, with a darker bill and browner legs, as well as a diagnostic dark loral patch. They show mostly a brownish general colour on the upperparts, with no metallic gloss at all. First-winters are similar to adults in plumage, especially first-winter males and adult females; however, young birds are duller, without the characteristic brilliant glossy tones of adults, especially those of males.

In flight, it is not possible to separate readily Common and Spotless Starlings unless good photographs can be obtained.

Spotless replaces Common Starling in most of the Iberian Peninsula, north-west Africa, Corsica, Sardinia, Sicily, some areas of southern France and on Menorca in the Balearic Islands. There is a wide overlap in range in north-east Spain, where both species breed and where they are even found in the same areas, occasionally producing hybrid pairs. The extent of hybridisation is, however, not yet known, and it could be more widespread than realised, given the difficulty in separating juveniles and first-winter birds.

This species is very similar to Common Starling, only differing in subtle details. In autumn and winter it shows fewer pale spots. In spring and summer it is virtually unspotted and uniformly black, with a slight metallic gloss. It is also more evenly purplish-green all over, and lacks the blue gloss present in Common Starling at some angles. The legs are brighter pink when breeding.

The elongated tips to the longer throat feathers in spring and summer are another good character to separate this species. The bill is slightly shorter and thicker at the base. It is also slightly decurved, a trait that is not always visible.

It is a good imitator of the songs of other species, giving often perfect imitations of strophes of other birds; some of the most imitated species are Golden Oriole, Common Linnet and Swallow. The repertoire is highly variable between individuals, as in Common Starling, so the two species cannot be safely separated by song.

Spotless Starling has been recorded as a vagrant in Denmark, Switzerland and Greece, so vagrancy to Britain is certainly possible.

This species is unmistakable in adult plumage: a combination of pink mantle, scapulars and underparts and black head, throat, wings and tail gives it a striking appearance. Adult males show a shaggy crest which can be erected when breeding. Females also have a crest, but this is shorter.

Juveniles are uniformly sandy-brown, with an overall café au lait colour when seen in full juvenile plumage as a vagrant in early autumn in Britain. The absence of dark lores, as well as its paler plumage, separates it from juvenile Common Starling.

After post-juvenile moult in August-September and even later into November, it can show a mixed pattern of retained pale brown juvenile feathers and moulted black feathers on the head and wings, giving it an odd appearance. In Britain, however, it is more frequently found in full juvenile plumage.

This species breeds from the Balkans and Turkey east to Central Asia and north-west China, migrating to winter in India and south-east Arabia. It's a highly nomadic species which can undergo irruptive movements during breeding, gathering in huge colonies and sometimes nesting west of its normal range. As a result there are significant periodic summer and autumn influxes in western Europe.

Watching large colonies of Rosy Starlings going to their roosts is one of the big spectacles of birding, with hundreds of thousands of birds flying in huge flocks to land on reeds, where a highly noisy chorus of squeaking voices can be heard for miles around. Unlike Common and Spotless Starlings, however, Rosy does not mimic other species. 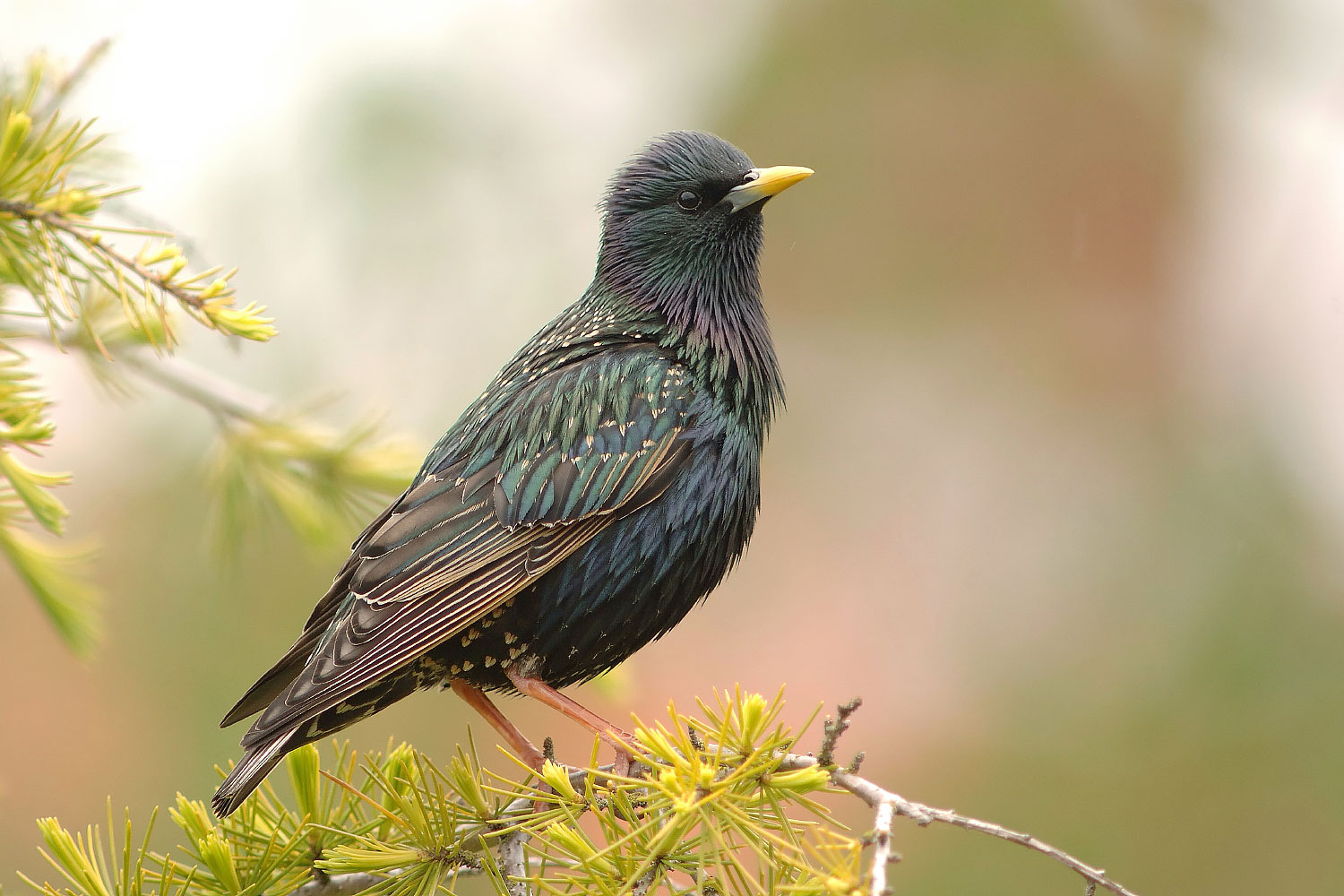 Adult male Common Starling (Sheringham, Norfolk, 16 May 2010). The bluish-grey base of the lower mandible is diagnostic of the male during the breeding season. The straight, long bill, as well as the pale tips to the mantle feathers, eliminate Spotless Starling in this season. The clear green gloss on the mantle is also diagnostic in spring and summer (Julian Bhalerao). 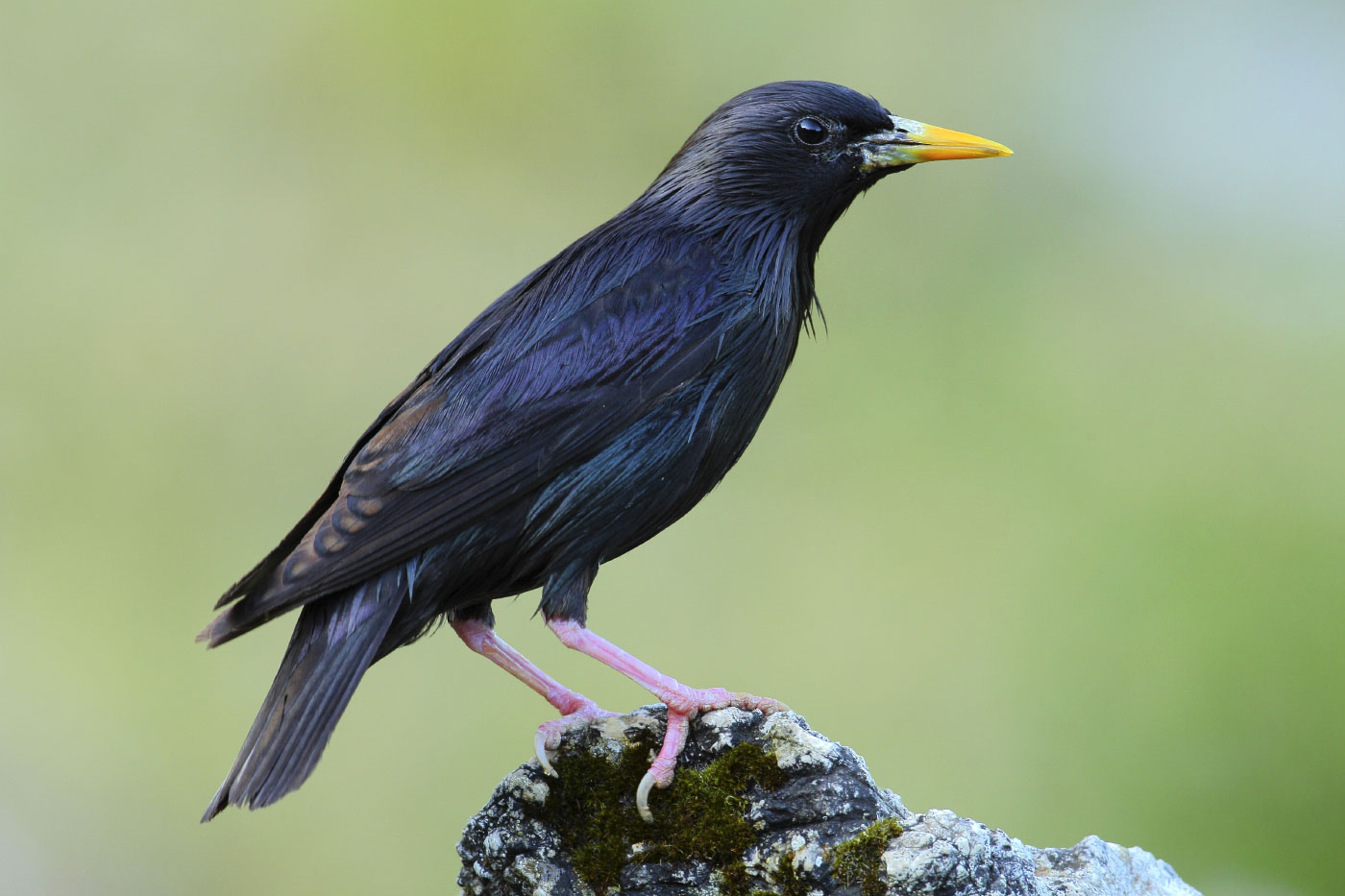 First-summer/adult Spotless Starling (Andalucia, Spain, 1 July 2010). The elongated tips to the narrower throat feathers, together with the uniform black plumage, along with an impression of only a purple gloss, separates this bird from Common Starling. The slightly shorter throat feathers and an apparent retained brownish tertial suggest this bird is a first-summer, though it is not possible to sex it in this plumage (Andres Miguel Dominguez / BIA). 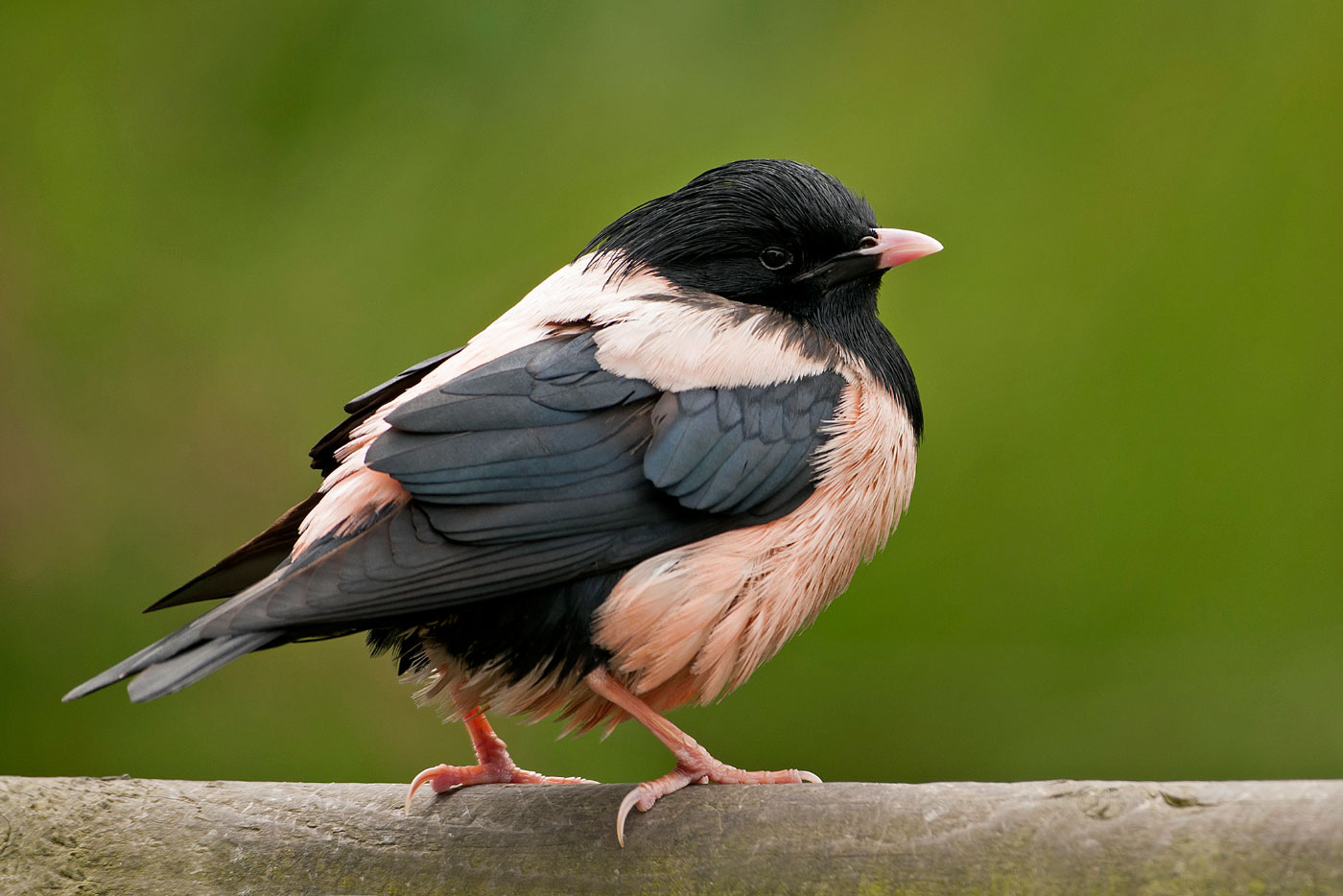 Adult male Rosy Starling (Lytham St Annes, Lancashire, 28 June 2008). The pink mantle, scapulars and most of the underparts combined with black head, throat, wings and tail is diagnostic of adult Rosy Starling. The shaggy crest, at rest here, and brilliant and neat pink tones suggest this bird is a male (Steve Young / www.birdsonfilm.com). 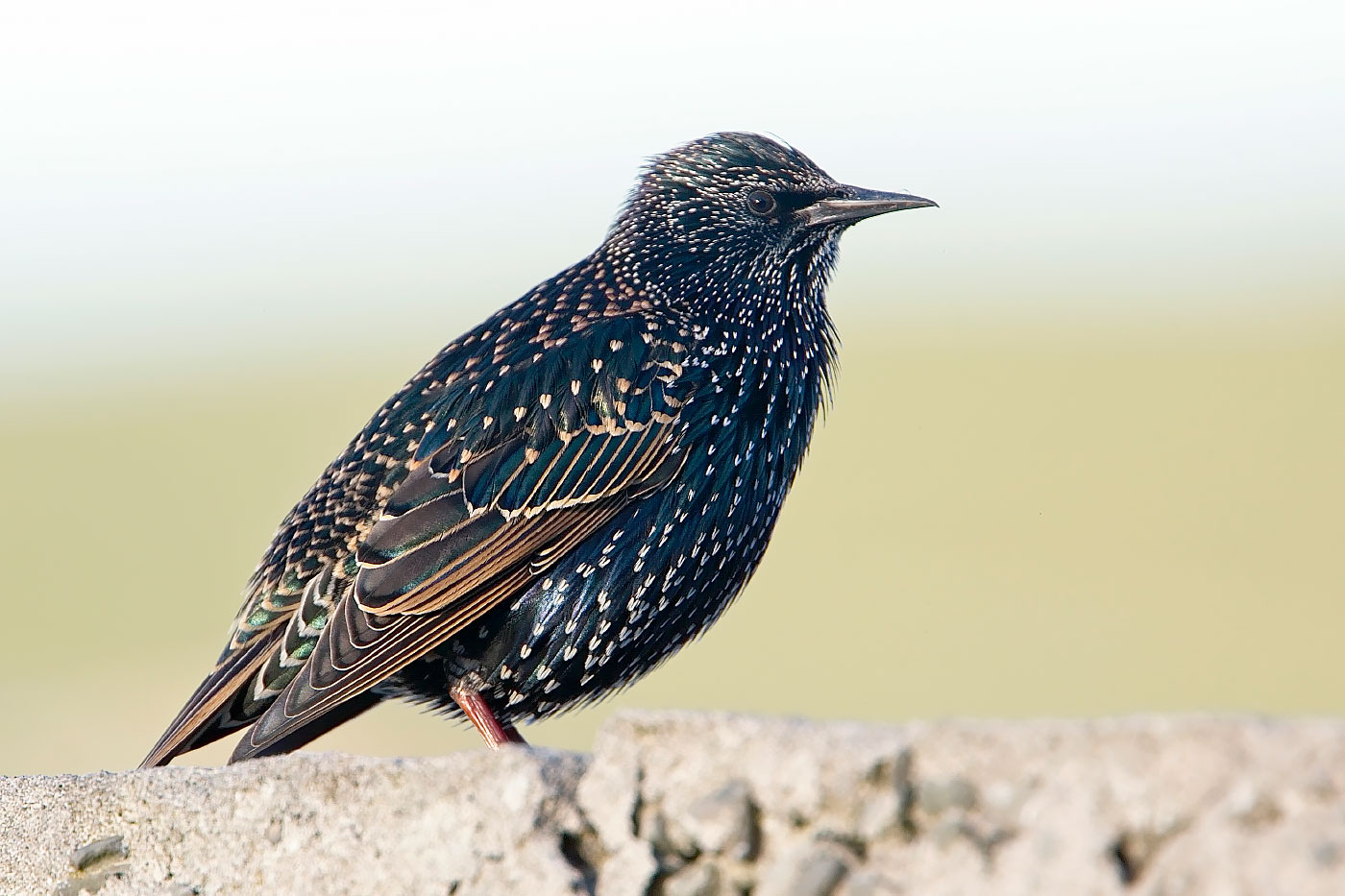 Adult male Common Starling (Brake, Mainland, Shetland, 12 October 2016). The small and narrow pale spots, together with the black shaft-streaks penetrating the tips, are typical of male Common Starling after a complete moult into autumn plumage. This bird still shows noticeable pale spots compared with average Spotless Starling in autumn/winter plumage, especially on the edges of the underparts (Tony Mills). 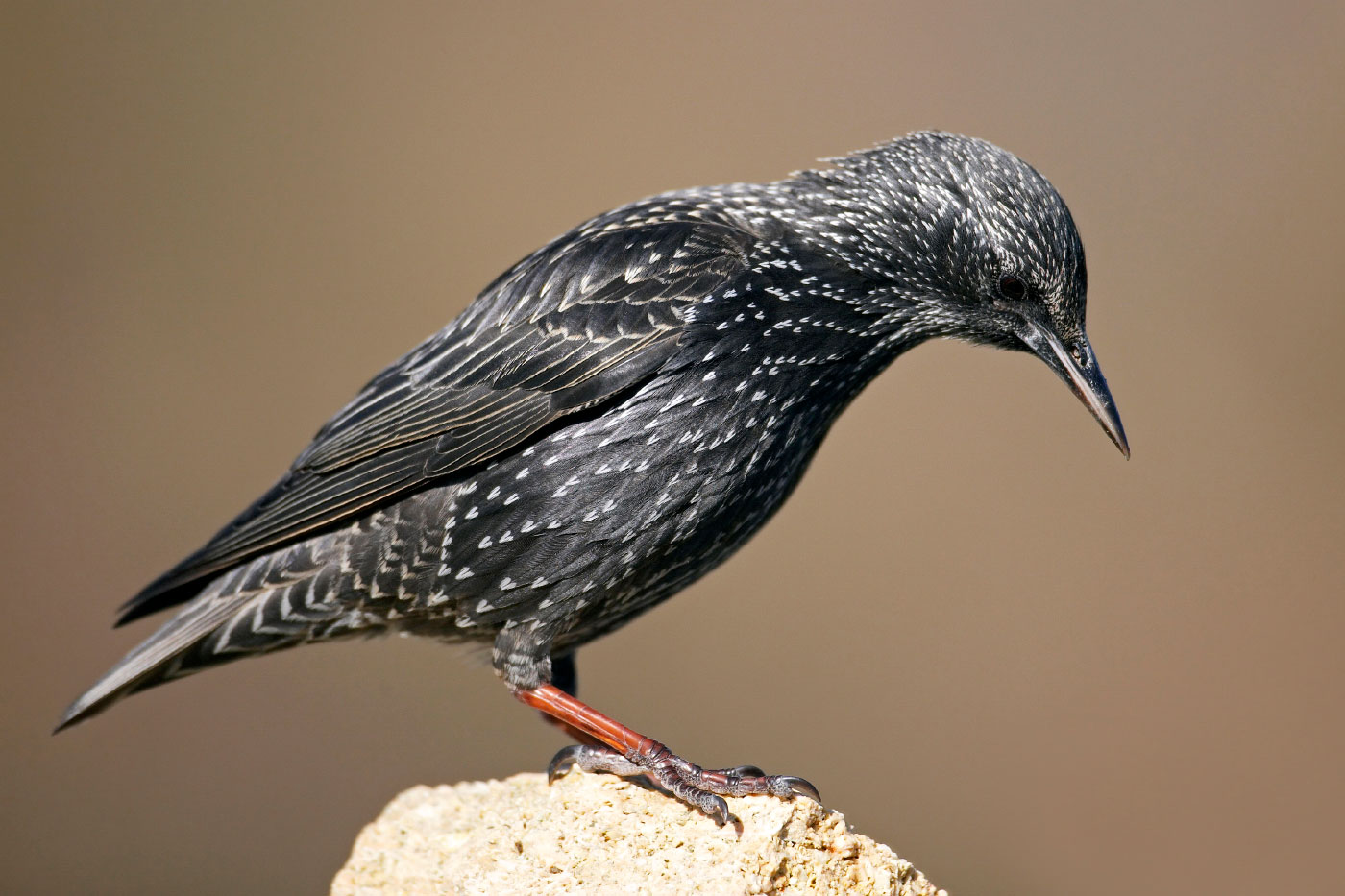 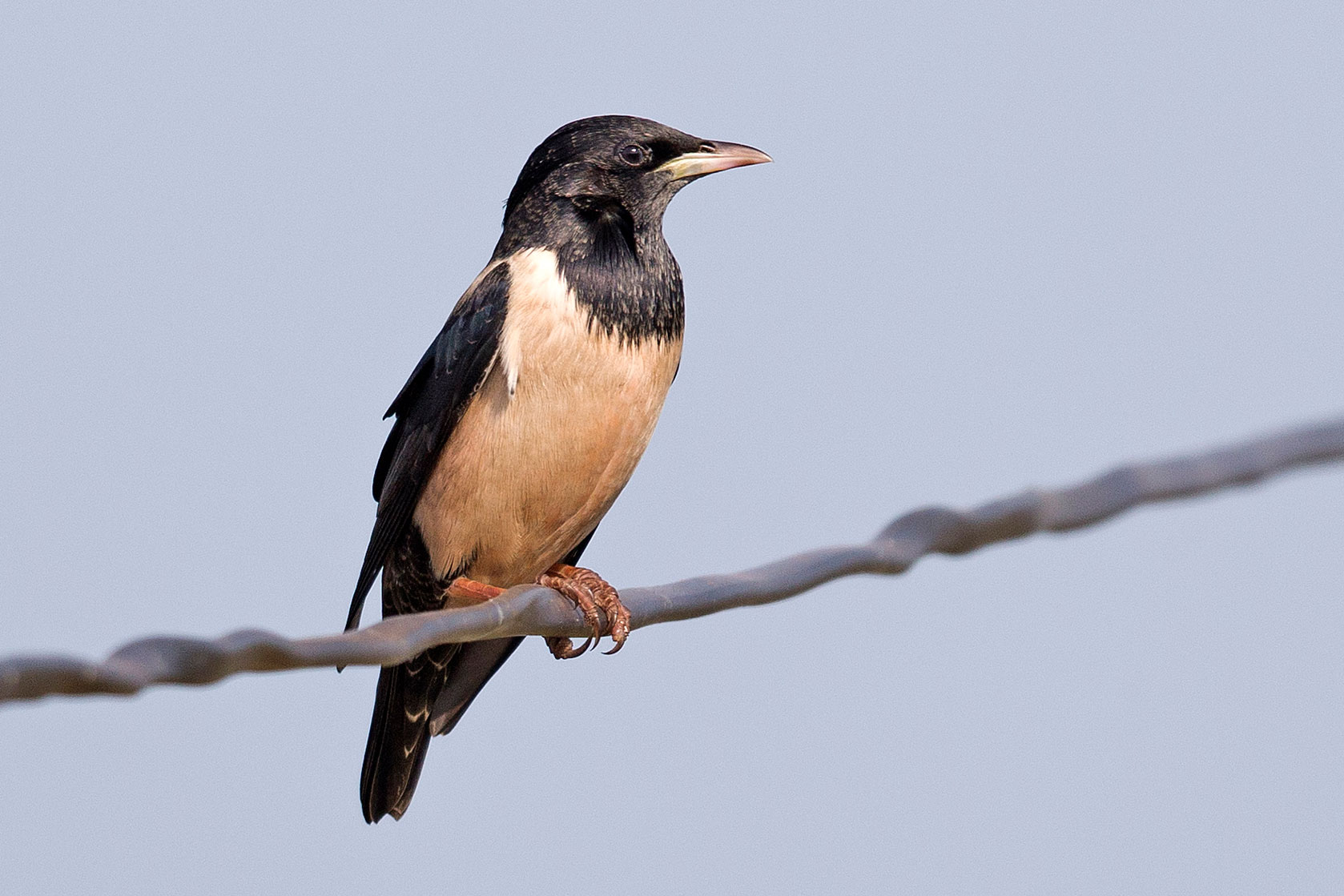 Presumed adult male Rosy Starling (Goa, India, 7 December 2015). In winter plumage, after a complete post-breeding moult, both sexes of Rosy Starling attain a duller adult plumage. However, in females the pink tones tend to be dirtier and duller than the bird pictured; this individual also appears to have a longer crest than average for female in autumn and winter. However, as both ages perform a complete moult, the extent of overlap can make sexing difficult, especially separating adult females from first-summer males (Andrew Moon). 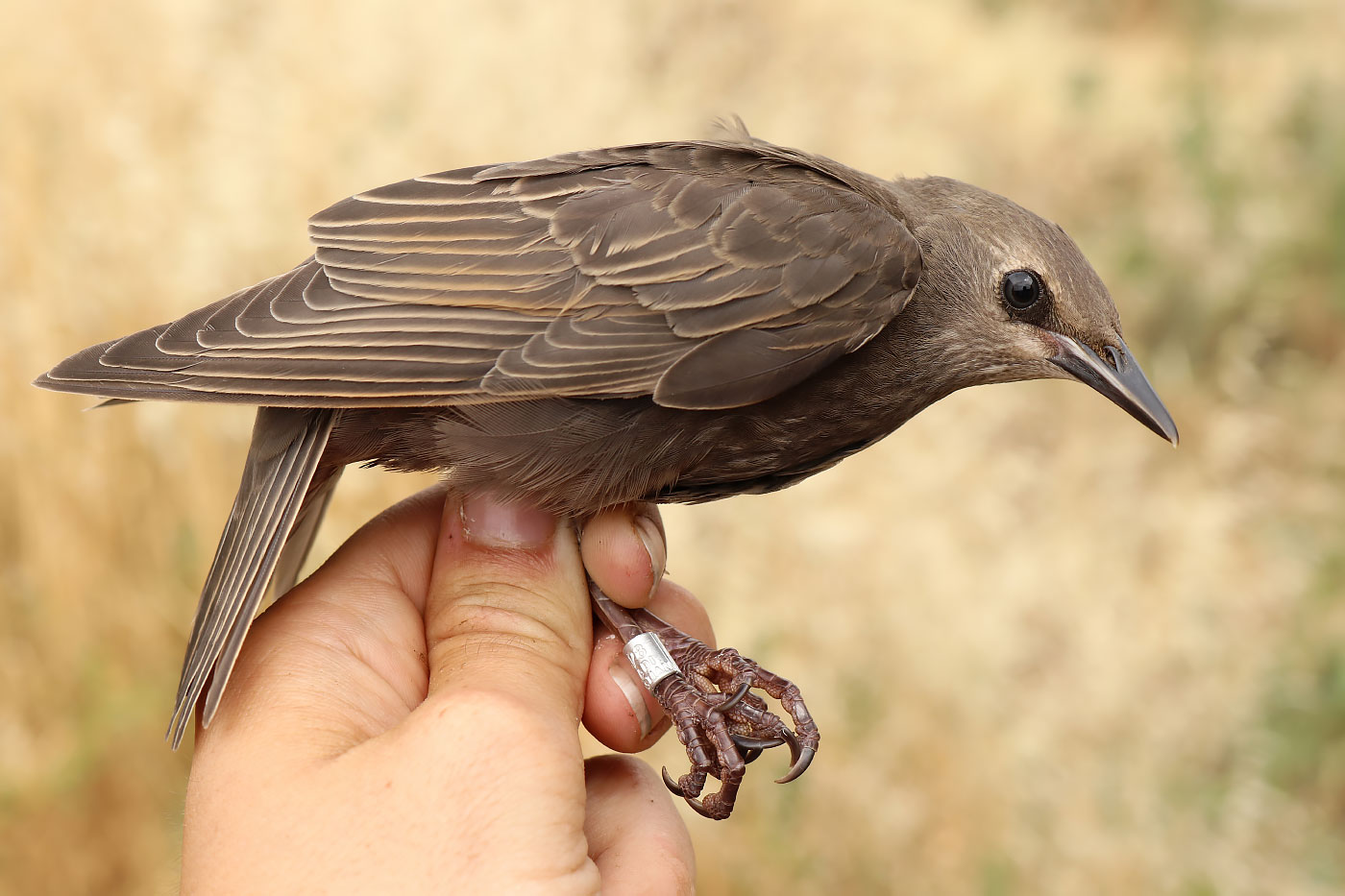 Juvenile 'pure' Common Starling (Catalonia, Spain, 3 June 2017). In north-east Spain it is sometimes not possible to separate Common and Spotless Starling in juvenile plumage. However, the bird in this image shows fewer darker tones than the average juvenile Spotless. The browner tones are uniform including the head, making it inseparable from an average juvenile Common from the rest of Europe, suggesting a bird from a pure pair of Common Starlings (Marc Illa). 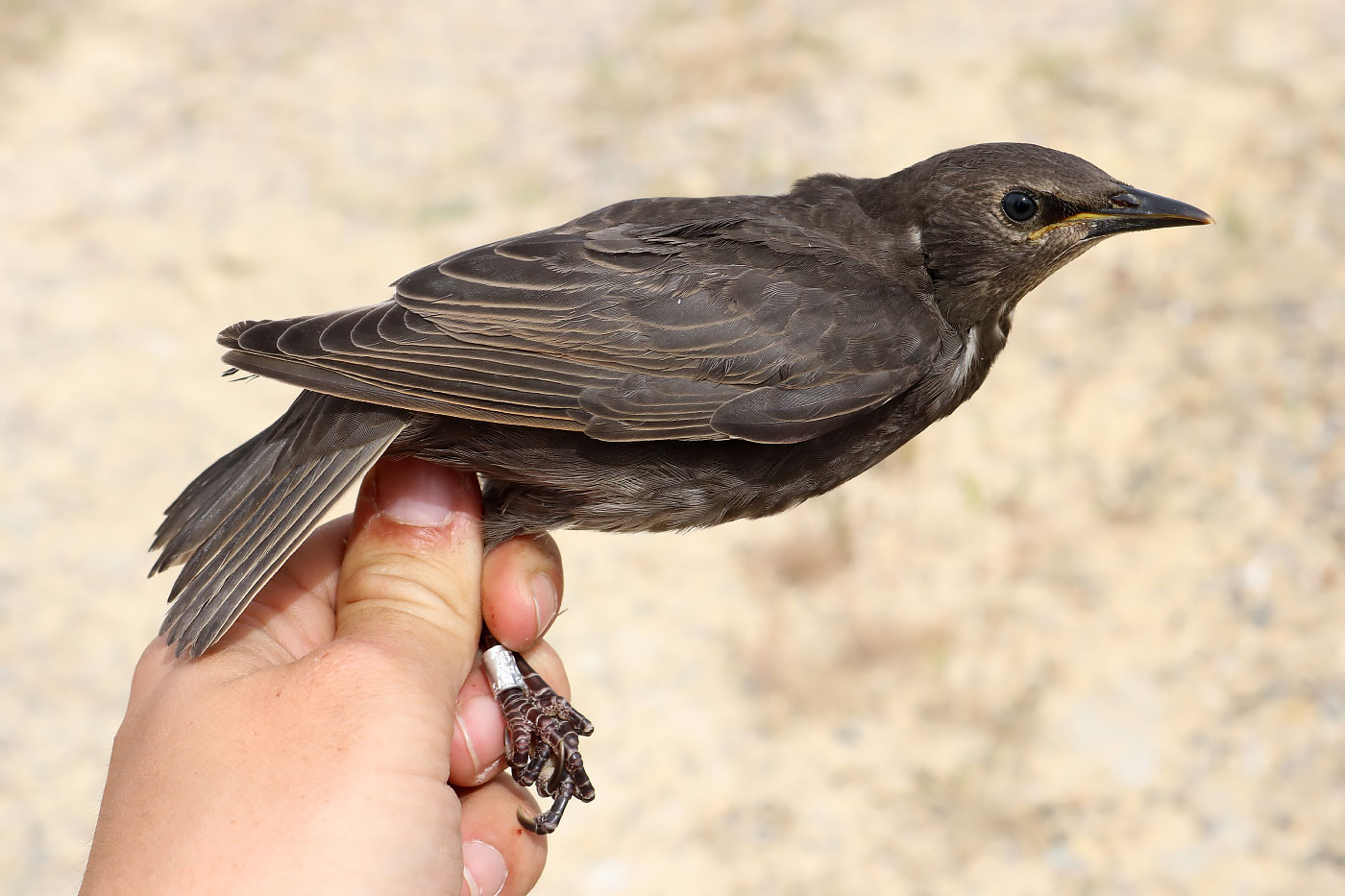 Juvenile 'pure' Spotless Starling (Catalonia, Spain, 21 May 2017). The general tones of this bird are darker compared with the average brown juvenile plumage of Common Starling. The absence of paler brown tones on the mantle, upperparts and head strongly suggest it to be a Spotless Starling, despite having been ringed in the area of overlap of both species (Marc Illa). 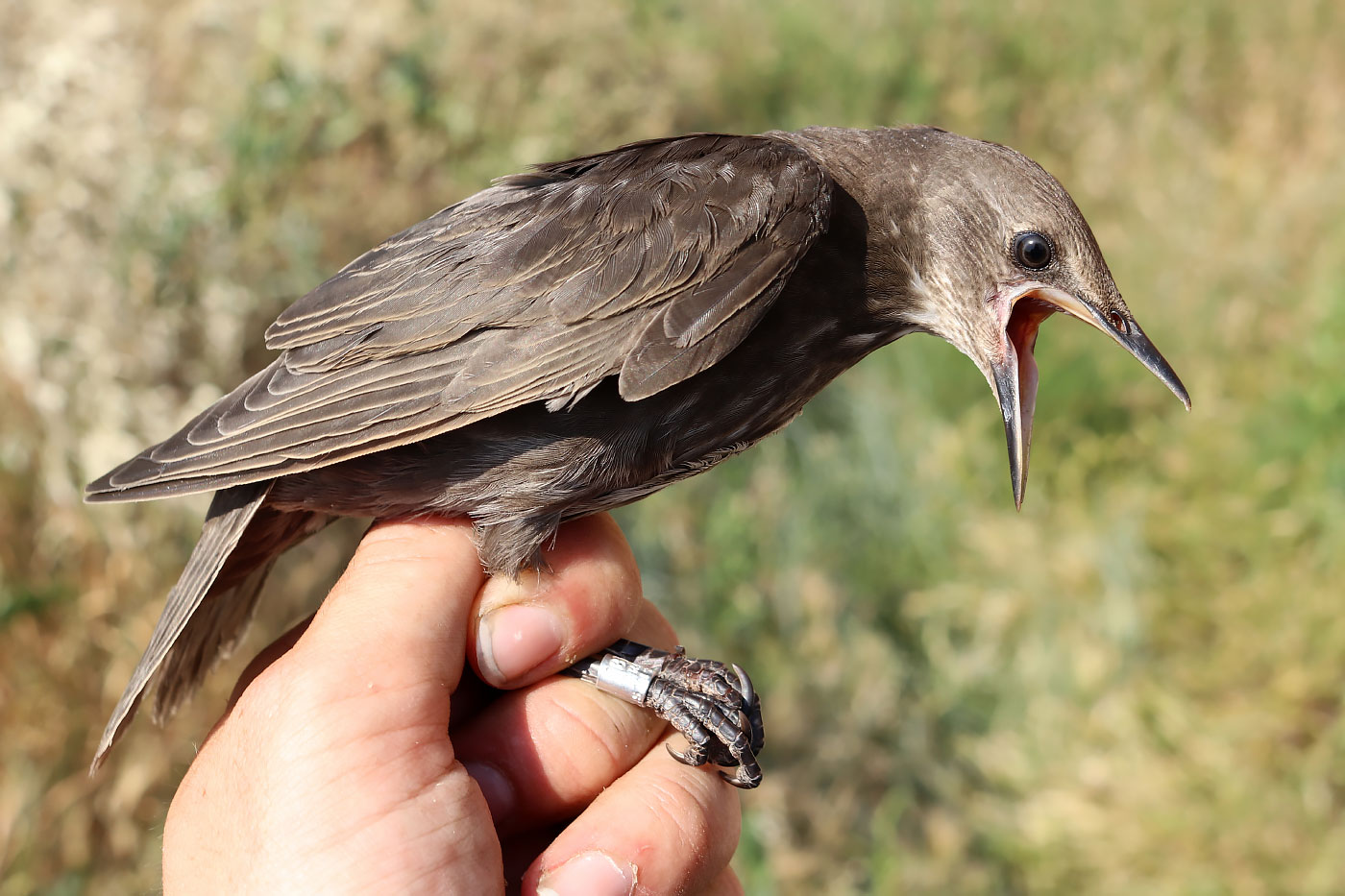 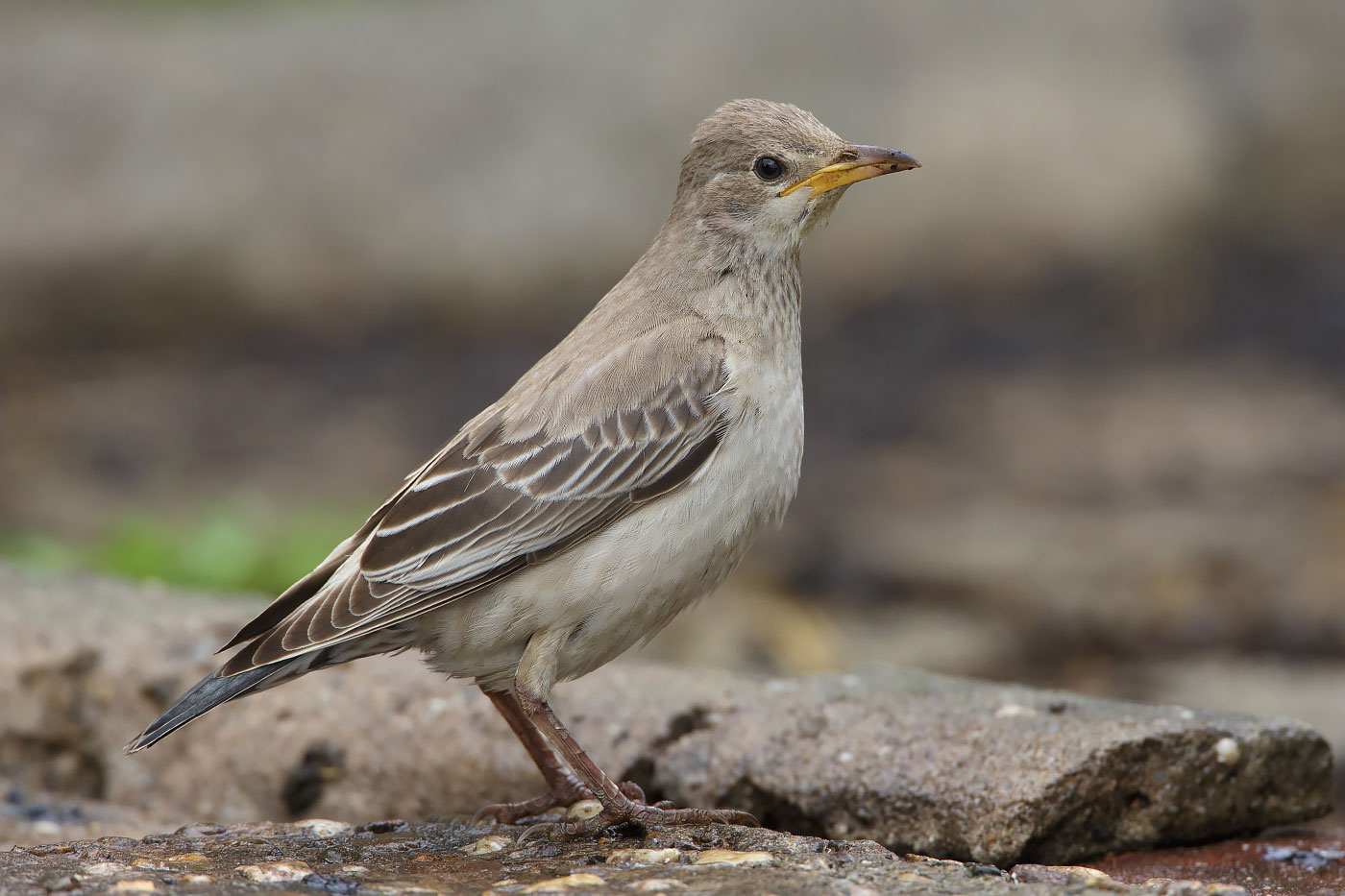 Juvenile Rosy Starling (Terschelling, The Netherlands, 2 September 2015). This is the most frequent plumage found in Britain in autumn. Juvenile Rosy is mostly plain, with a general pale brownish appearance. Note, however, the pale lore compared to juvenile Common Starling. Plumage colour is a good clue to find a young Rosy in autumn in big flocks of Common Starlings, since most first-year Commons have already moulted to a blackish plumage by September and October. If you spot a café au lait starling, pay attention! (Arie Ouwerkerk / www.agami.nl). 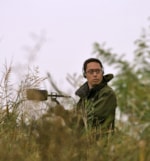 José Luis Copete is  a bird ringer, recorder and researcher, as well as an editor at Lynx Edicions. He has written numerous papers on bird identification. 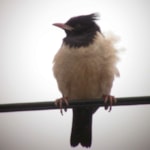 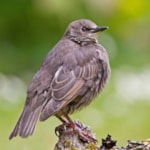 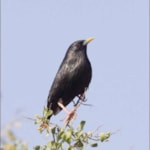