Snow Bunting is a welcome addition to winter birding in Britain. Usually found on shingle and sand shorelines in the north and east, it is very rare inland. This is a striking bird and identifying it to species is generally straightforward. However, it is present in a bewildering array of plumages, with subtle differences based on age, sex and subspecies. While a definitive identification remains difficult, Andy Stoddart provides the information you need for a good grounding for assigning the Snow Buntings you see in the field. 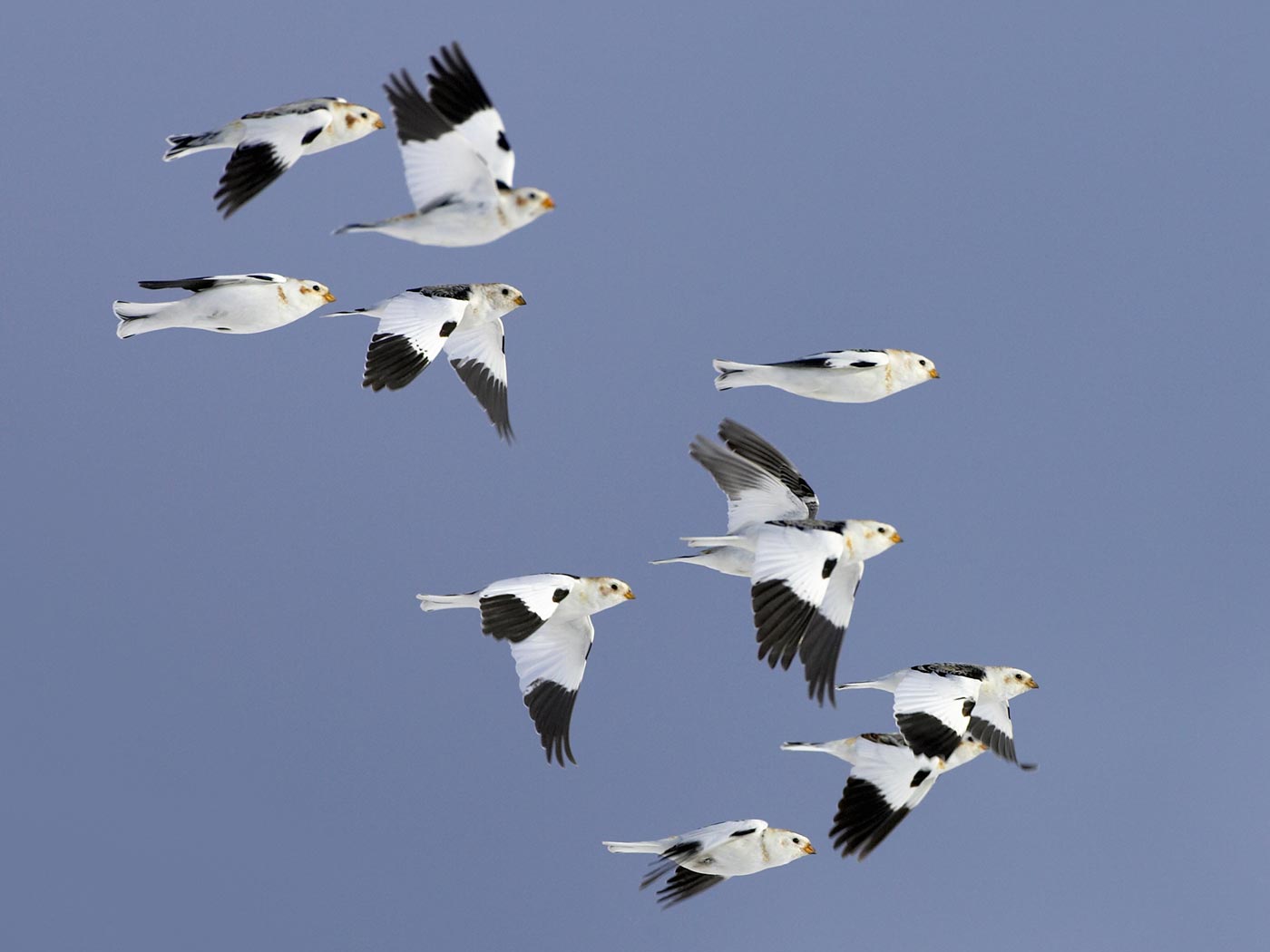 Snow Bunting is a remarkable species, a real High Arctic specialist and the world's most northerly breeding passerine. It has a circumpolar distribution, breeding at high latitudes. Some winter well to the north but most, especially females, move south in autumn.

A further, albeit poorly defined, subspecies – vlasowae – breeds from north-east European Russia (where it intergrades with nivalis) eastward to the Pacific and winters mainly across the Asian steppe zone but also as far west as Hungary. A third, much more range-restricted subspecies – insulae – breeds almost entirely in Iceland and winters in Britain, The Netherlands and northern Germany.

Both nivalis and insulae occur in Britain but the latter is more common, perhaps accounting for about 75% of all birds. The occurrence of vlasowae in Britain is possible, but it would be hard to separate from the more likely occurrence of an identical-looking pale nivalis from north-east Greenland or Spitsbergen.

Although Snow Bunting is almost exclusively a winter visitor to Britain, it is also a very rare breeding species, confined largely to the high tops of the Scottish mountains, particularly the Cairngorms. This population is very small, most recently estimated at under 80 pairs, and appears to comprise mostly insulae.

For most of us, however, Snow Buntings are winter (mid-September to April) birds of the coast, mainly in the north and east and typically favouring shingle and sand shorelines. In Britain they winter almost exclusively in this habitat and are very rare inland. They form typically mobile and restless flocks, taking flight to reveal explosions of white from which they get their popular name of 'snowflakes'.

Snow Bunting is easy to identify to species level. It is superficially similar to White-winged Snowfinch of the Alps, but in Britain there is no risk of confusion. Males in summer plumage (acquired through wear rather than moult) have a dark bill, white head and underparts, black upperparts and much white in the wing.

Male nivalis has a wholly or partly white rump, that of insulae being dark. Males of this latter subspecies can also have a dark nape and crown patch and dark marks in the ear coverts. Females of both subspecies have pale feather fringes in the upperparts and dark streaking in the crown and ear coverts. Female nivalis may have a partly white rump, this being dark in insulae.

Full juvenile plumage (which is only seen on the breeding grounds) comprises a uniformly grey head and upperparts, a prominent white eyering, diffusely grey-streaked underparts and little white in the wing.

In winter the appearance of Snow Buntings changes dramatically. There is still much white in the plumage, but there are now extensive rusty feather tips in the crown, nape, ear coverts and breast sides, the upperparts (including the rump) are tipped with rusty hues also (and appear heavily streaked) and the bill is yellow with a small dark tip.

Progressing beyond species identification at this season is more complex, however, with age, sex and subspecies differences resulting in a multiplicity of 'boxes' into which any bird might potentially fit. To compound this complexity, there is significant (and overlapping) plumage variation so that while the extremes (adult male nivalis with large amounts of white in the wing and first-winter female insulae with very limited white in the wing) are readily identifiable, other combinations are much less so.

This short article can only provide a brief overview of the issues, but it should hopefully assist in the identification of at least some birds on typical field views. However, for a definitive age, sex and subspecies attribution it is in most cases necessary to observe a bird closely for a long period or, better still, take a series of photographs for subsequent comparison with more detailed literature. If photographing a Snow Bunting, a picture of the spread wing will prove most instructive.

The best starting point is ageing, although this is not straightforward. Adult Snow Buntings have a complete post-breeding moult, but young birds moult only the head, body and the lesser and median coverts, and sometimes some inner greater coverts and the odd tertial.

There are additional clues in the pattern of the primary and greater coverts, secondaries and tail feathers – with adult males showing the most white in these feather tracts and first-winter females showing the least – but these are subject to variation. Some of these features can be difficult to assess in the field and are best examined in photographs.

Typical nivalis has a paler, more greyish mantle which contrasts with the scapulars, while on insulae the mantle is a darker brown which matches that of the scapulars. In addition the rusty markings on the head and body are a little paler and less extensive on nivalis than they are on insulae. Finally, the rump of nivalis is whiter (albeit with yellow-rust feather tips) than in the darker-rumped insulae. 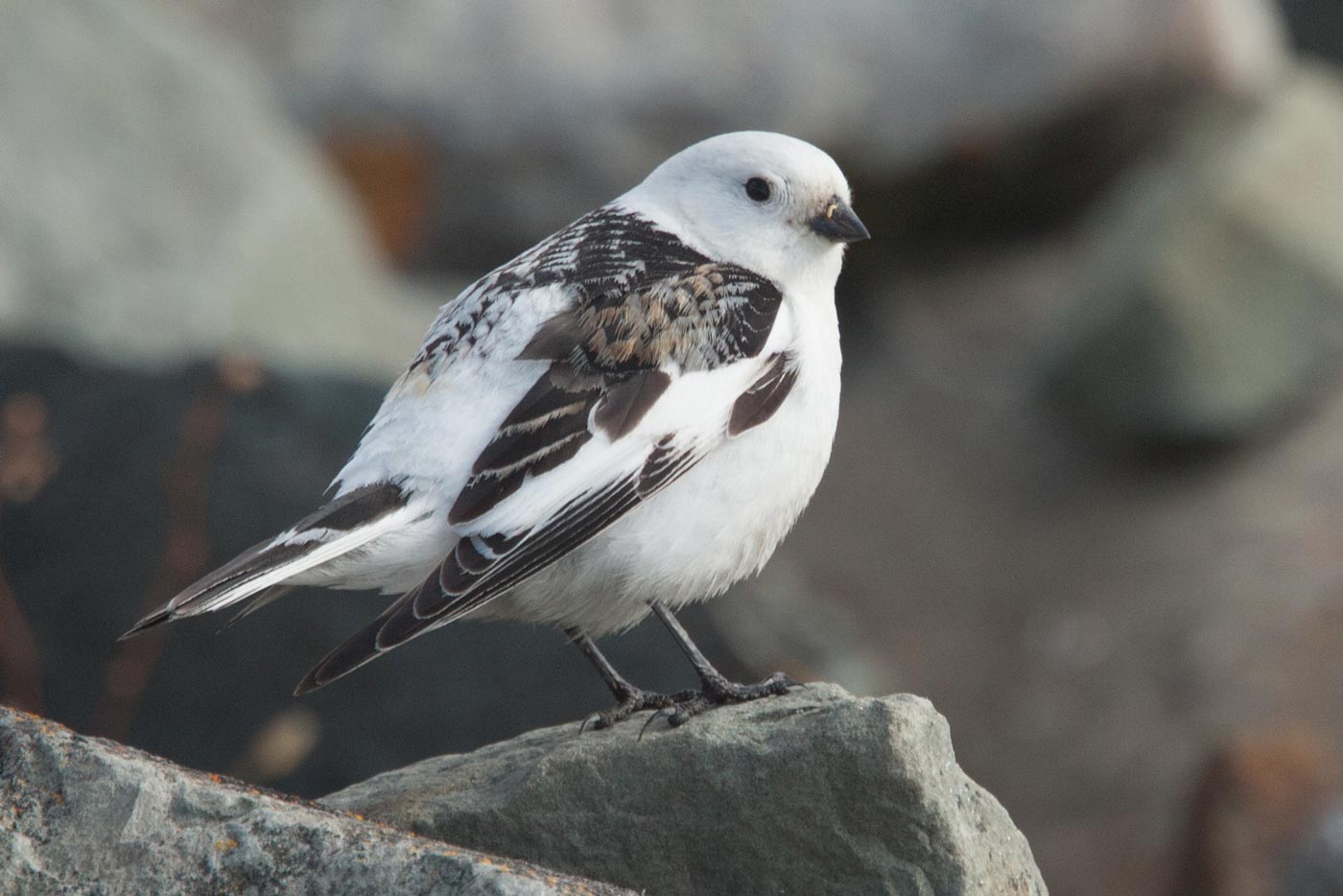 Snow Bunting (Svalbard, Norway, 13 June 2009). This summer-plumaged male – note the clean white head, extensive solid back in the upperparts and white lesser and median coverts – is of the widespread nominate subspecies nivalis. The largely white rump with a little black in the upper section is typical of this subspecies, although it is highly variable. Some are more heavily marked with black in the rump, while some birds from north-east Greenland and Spitsbergen (and also those from the Russian Arctic belonging to the subspecies vlasowae) have clean white extending to the lower back (James Lowen / www.jameslowen.com). 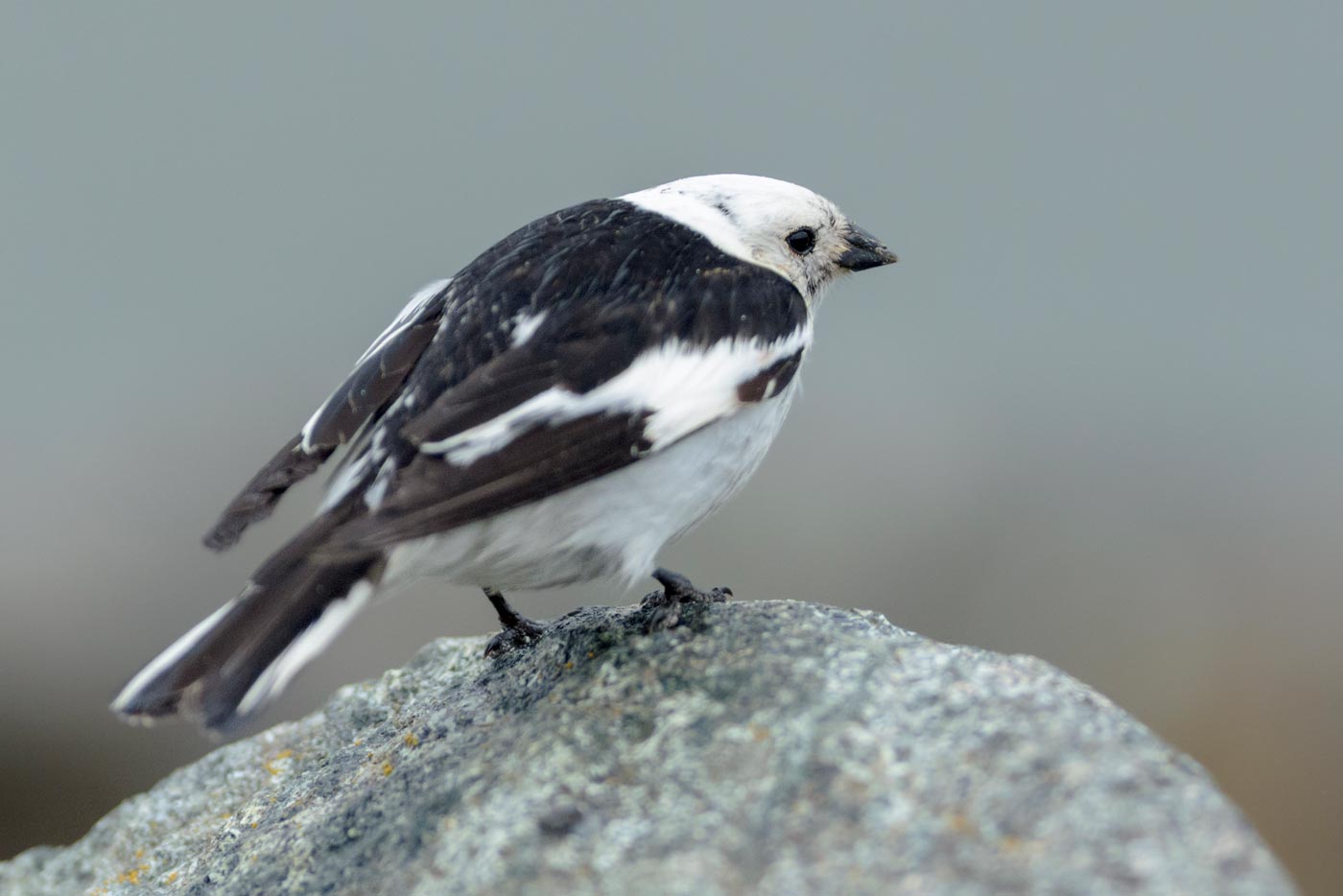 Snow Bunting (Jökulsárlón, Iceland, 27 June 2015). This summer male is of the almost exclusively Icelandic subspecies insulae. Note the almost wholly dark rump, characteristic of males of this subspecies in summer plumage. Summer plumage in Snow Buntings is acquired by feather wear, the pale feather tips of fresh autumn and winter plumage wearing away to reveal the darker feather bases beneath (Manuel Schulz / BIA). 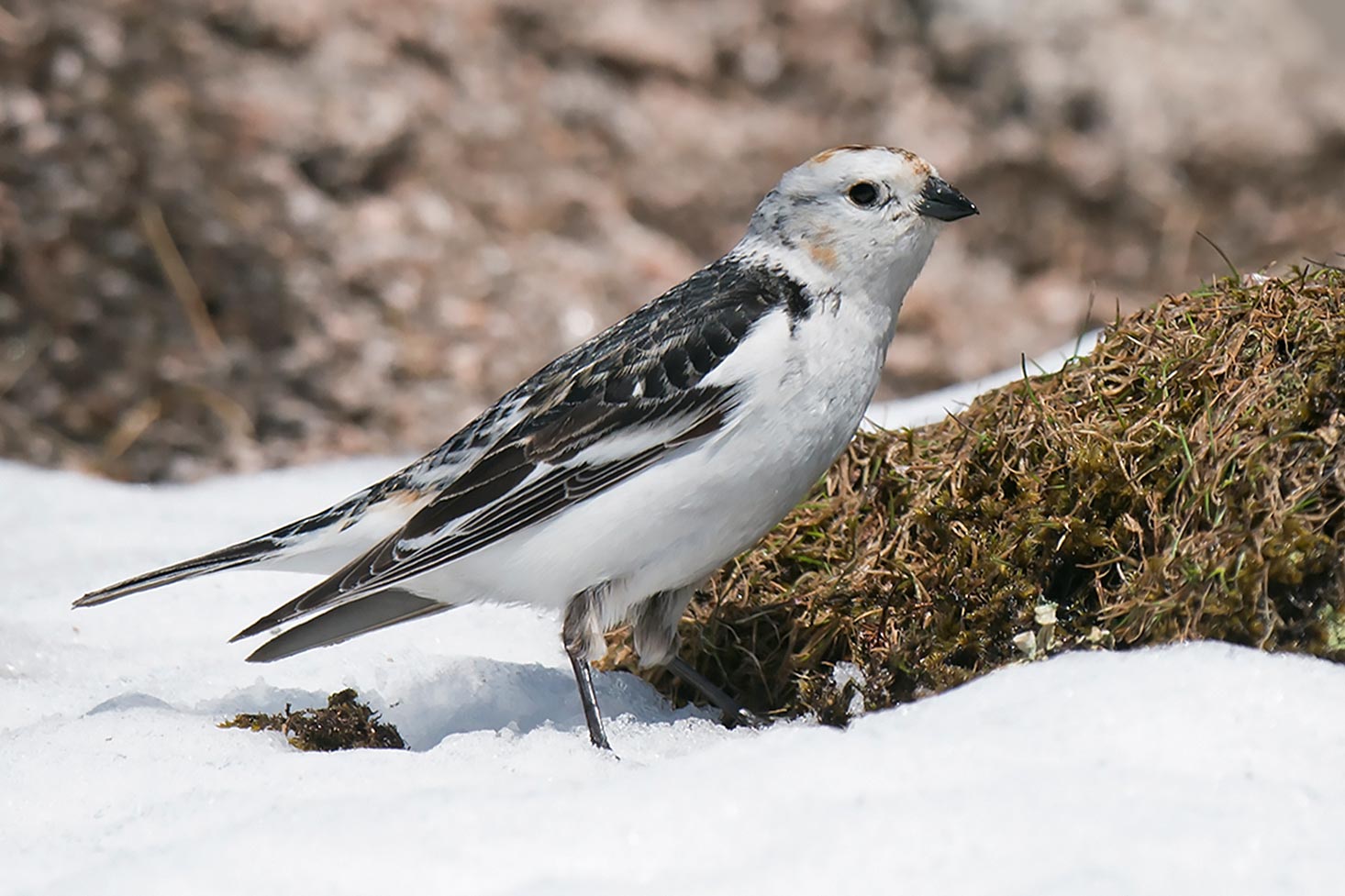 Snow Bunting (Cairngorms NP, Highland, 27 May 2012). This male belongs to the British breeding population in Scotland's Cairngorms. The dark markings in the crown, nape and ear coverts and the largely dark rump show it to be of the Icelandic subspecies, as are most British breeders (Steve Young). 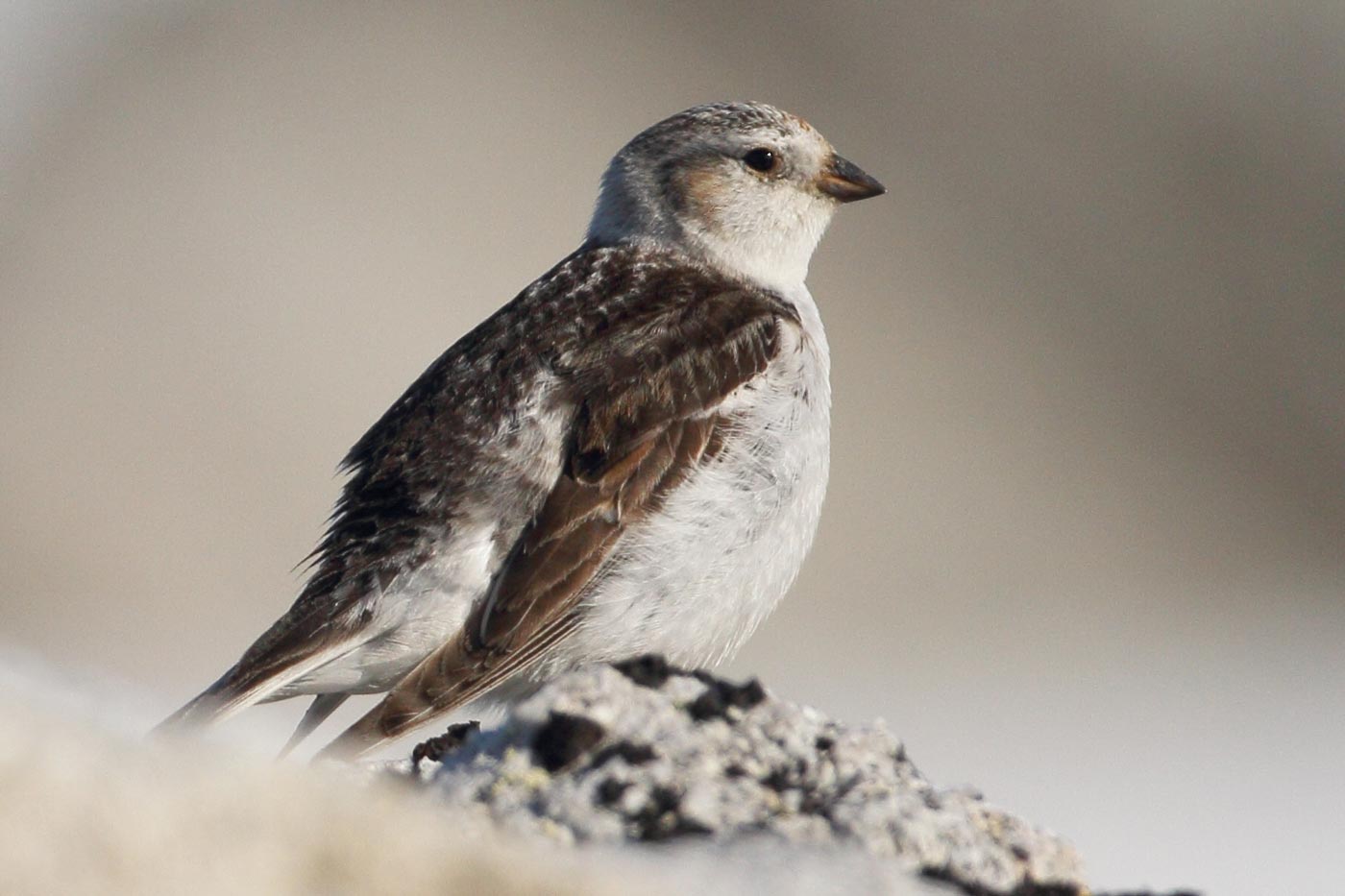 Snow Bunting (Spitsbergen, Norway, 26 June 2014). This summer-plumaged female – note the extensive dark head markings, brown fringes to the upperparts feathers and very limited white in the wing – is in Spitsbergen and so is of the nominate subspecies (Stefan Pfützke / www.green-lens.de). 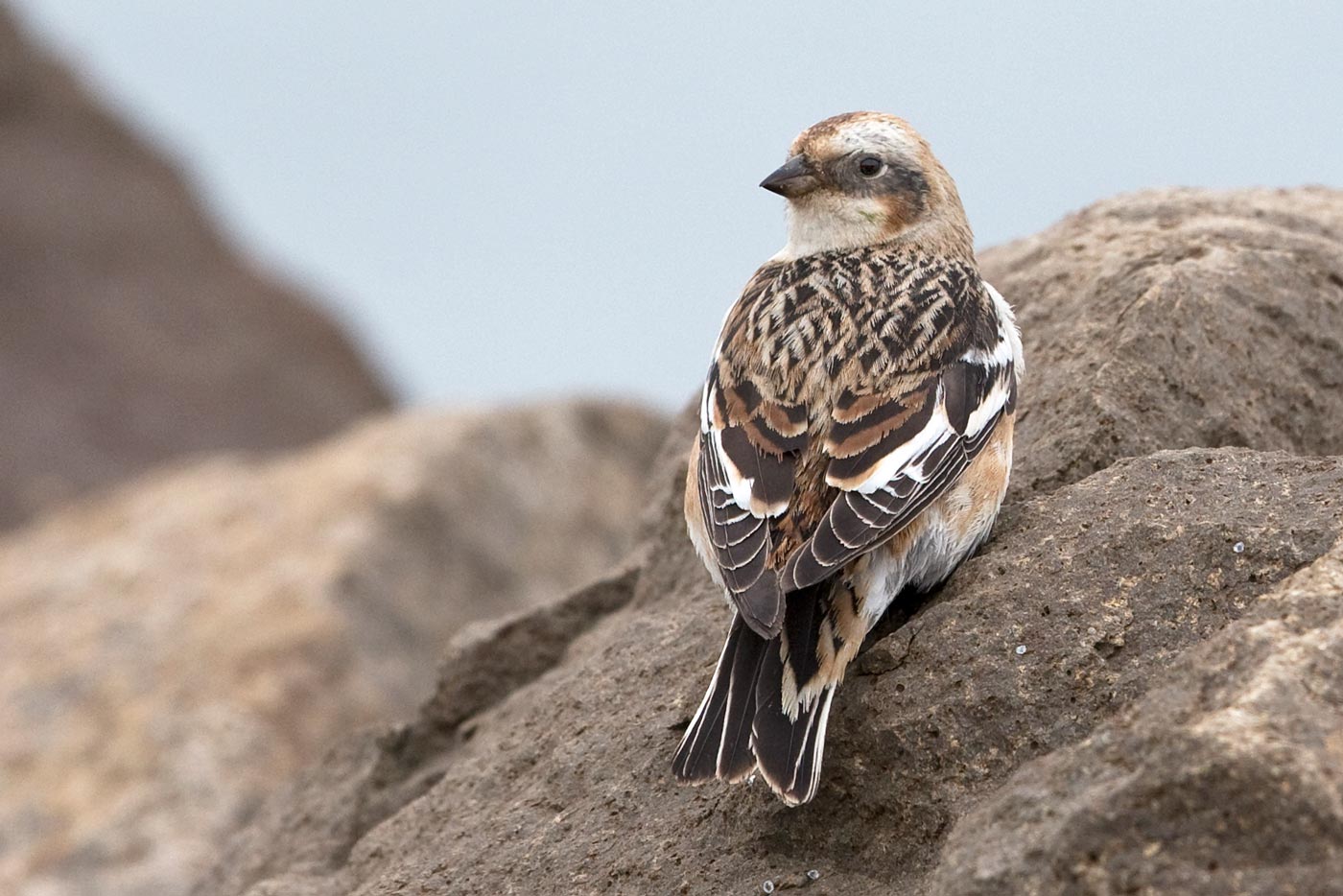 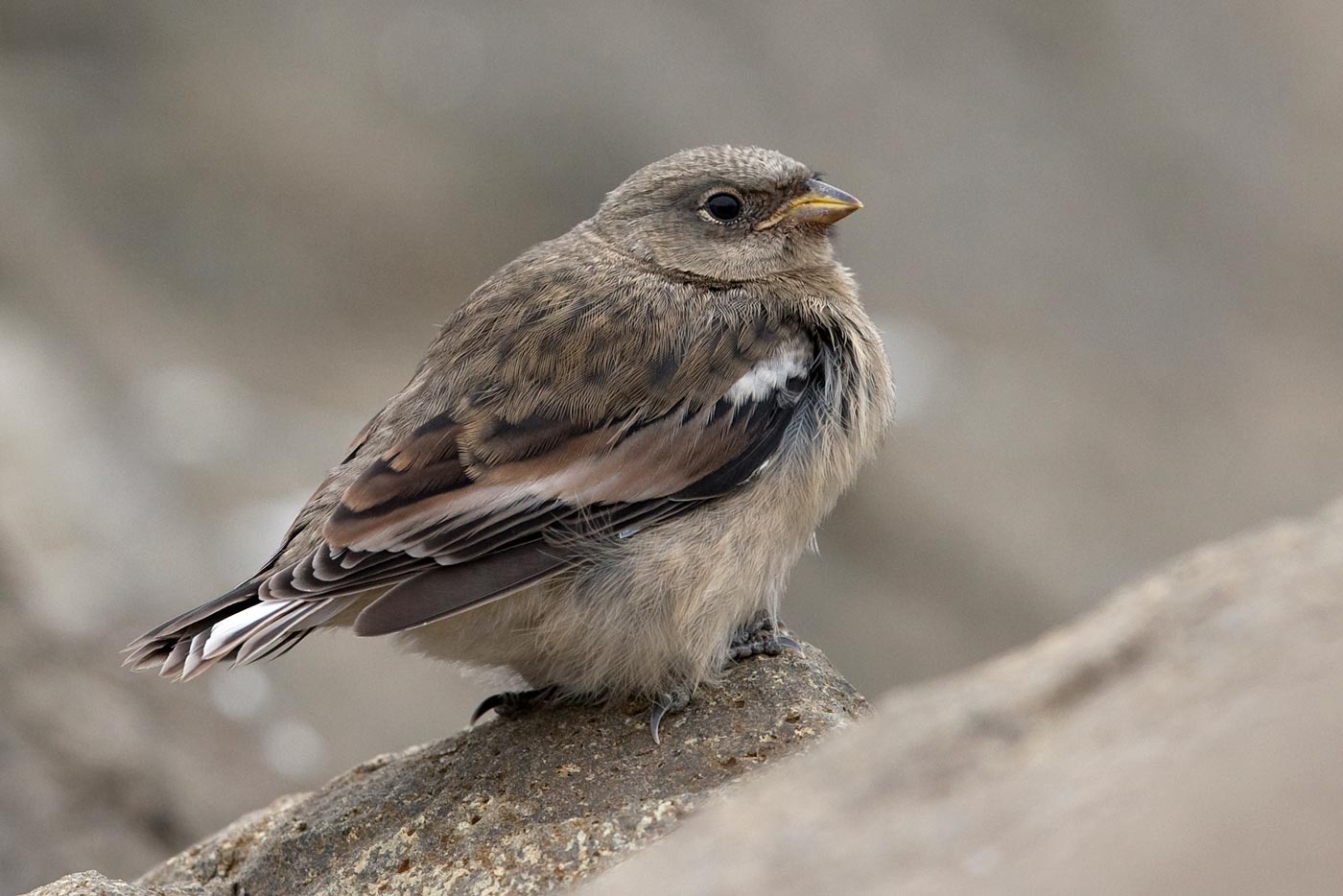 Snow Bunting (Hirsey, Iceland, 13 June 2017). Juvenile Snow Buntings – this is an Icelandic bird – appear very plain with a grey head, bold white eyering, broad greyish fringes to the upperparts feathers and sullied underparts. This plumage is only encountered on the breeding grounds so in Britain is restricted to Scottish mountain tops (Robin Chittenden). 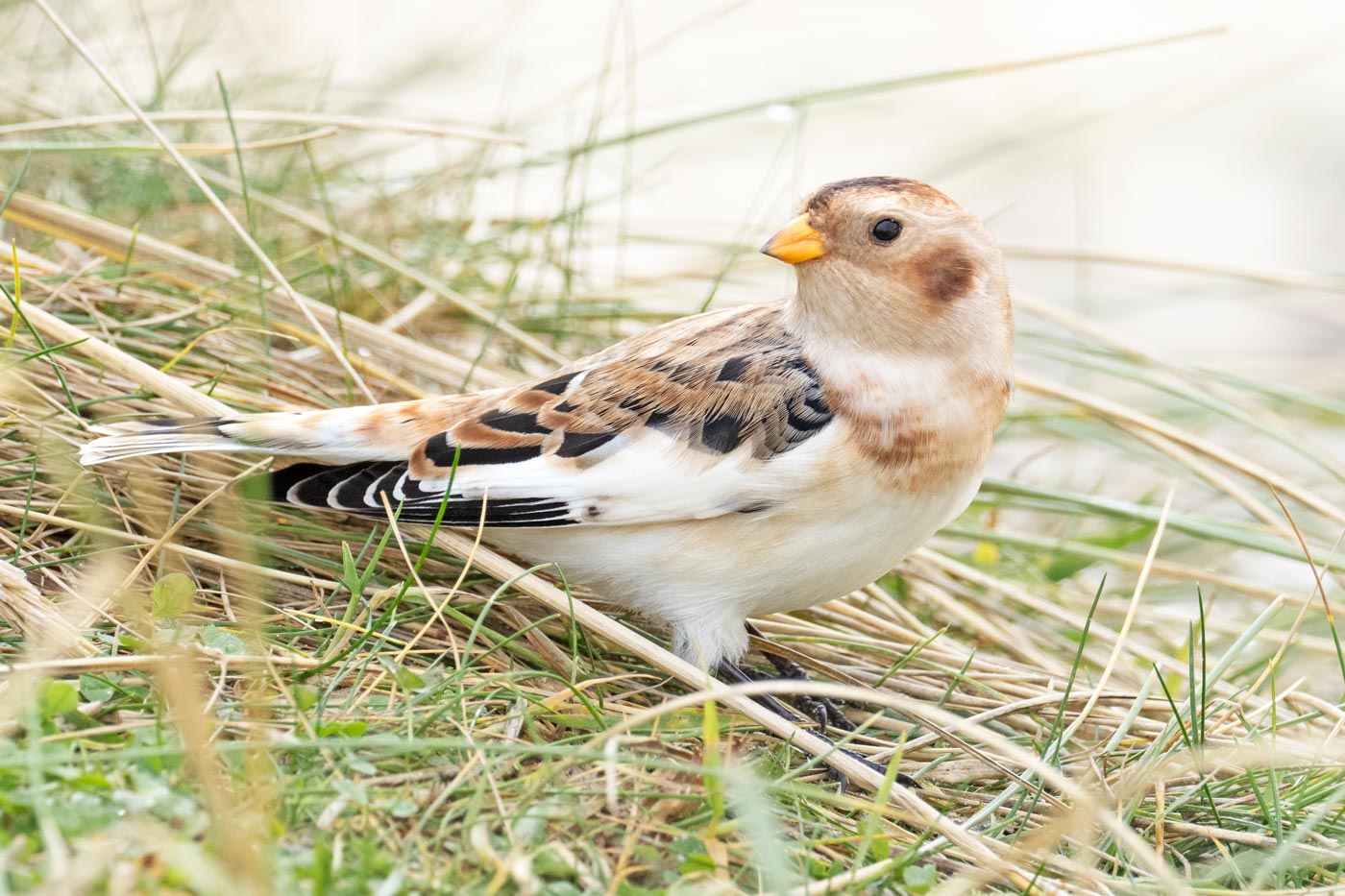 Snow Bunting (Spiggie, Mainland, Shetland, 2 November 2020). This fresh winter-plumaged adult male looks stunningly white. The wholly white lesser and median coverts coupled with black spade-shaped centres to the scapulars confirm that it is a male, as do the largely white primary coverts, while the rather rounded-looking tips to the tail feathers and very broad-looking tertials with very broad chestnut fringes indicate that it is an adult. The contrast between the very pale mantle and the darker scapulars suggests that it belongs to the nominate subspecies nivalis (Rebecca Nason / www.rebeccanason.com). 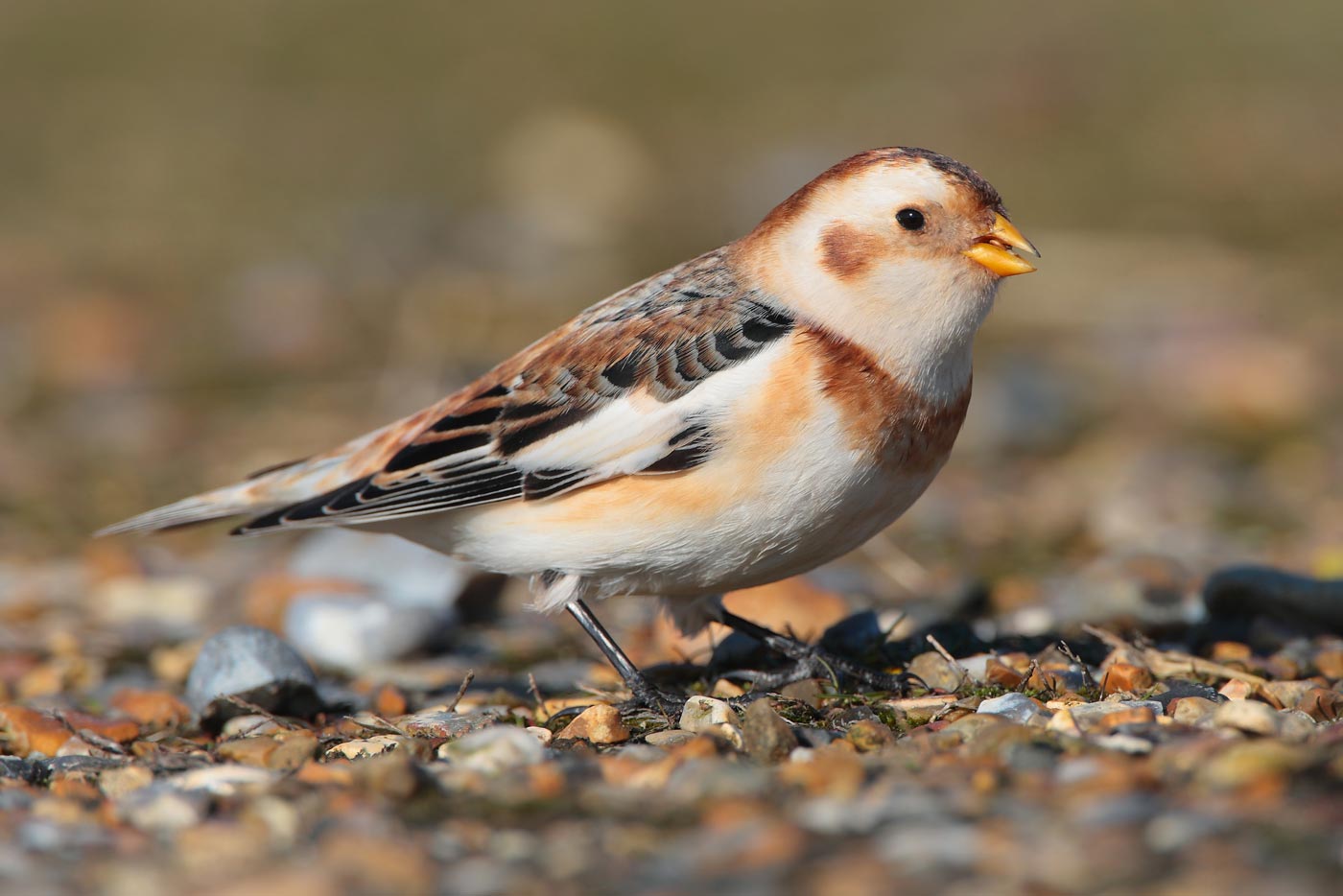 Snow Bunting (Salthouse, Norfolk, 8 February 2008). Once more, the wholly white lesser and median coverts show this bird to be a male, as do the black spade-shaped centres to the scapulars. As ever, ageing is difficult as the tips of the tail feathers cannot be seen here, but the narrow, rather pointed tertials and inner greater coverts suggest a first-winter bird. The upperparts are difficult to interpret, but the richly hued markings in the crown, nape and ear coverts might suggest an Icelandic bird (Kit Day). 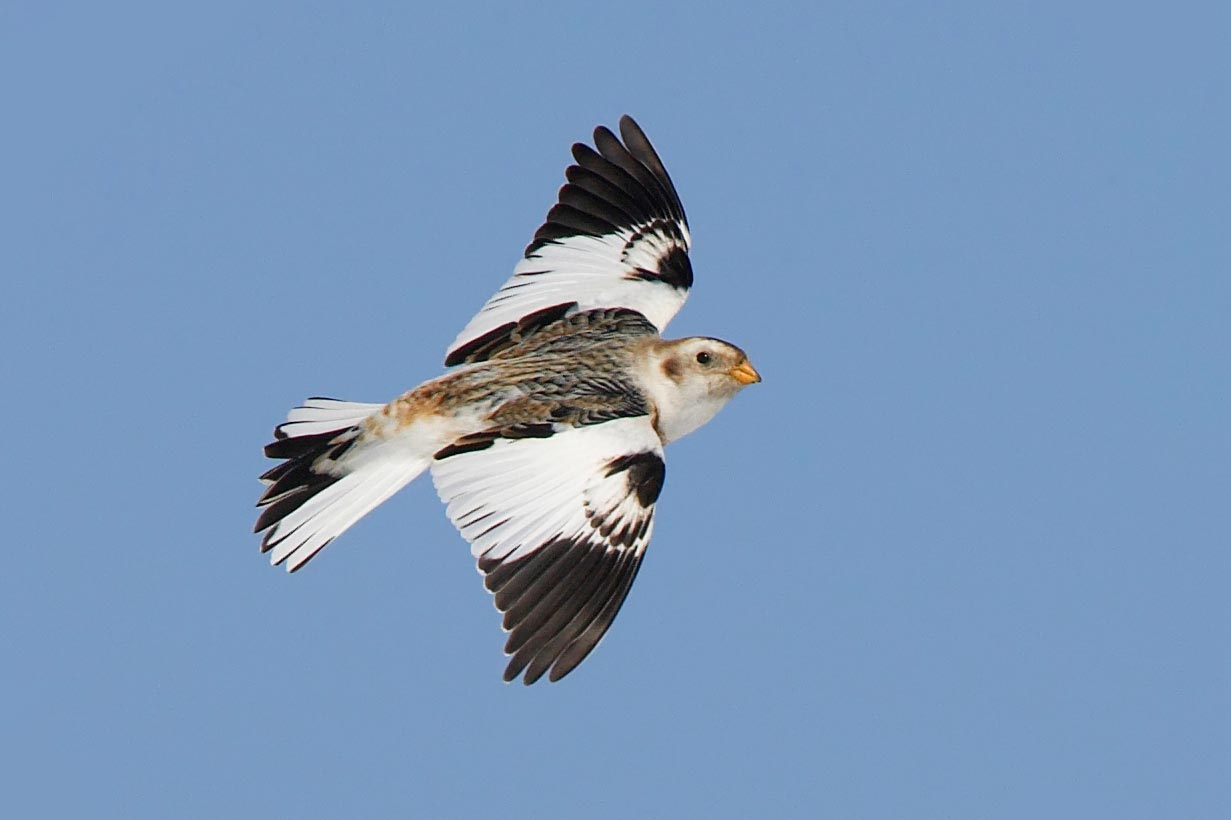 Snow Bunting (Helsinki, Finland, 25 March 2006). The wholly white inner wing coverts and black blunt-tipped centres to the scapulars show this bird to be a male, while the extensive black tips to the primary coverts are consistent with a first-winter bird. Turning to other clues, the extensive dark shading near the tip of the third outermost tail feather and the rather pointed tips to the tail feathers also indicate a first-winter. Although the pale tips to the upperparts are a little reduced, there is still something of a mantle/scapular contrast, suggesting nominate nivalis, while the extensively white lower rump but streaked upper rump is a typical pattern in this subspecies (Tomi Muukkonen / www.agami.nl). 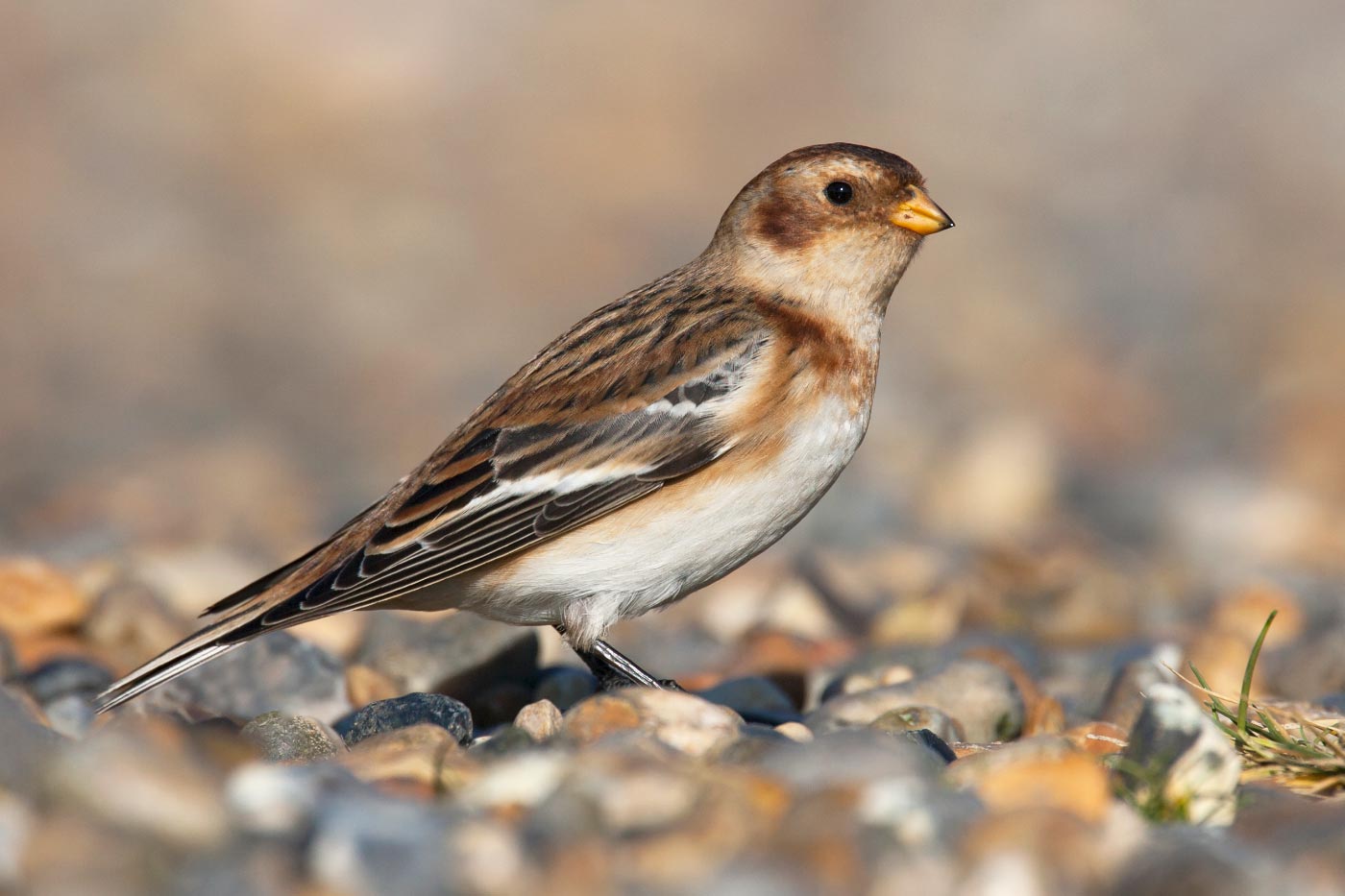 Snow Bunting (Salthouse, Norfolk, 2 February 2007). This winter-plumaged bird is a female. Note the rather pointed shape to the dark centres to the scapulars, while the lesser and median coverts are dark with white tips. Other indicators are the wholly dark primary coverts, lack of white in the bases of the primaries and total lack of white in the rump and uppertail coverts. Ageing is more problematic as the pattern and shape of the tail feather tips can't be seen, but the rather narrow and pointed tertials and inner greater coverts suggest a first-winter. The very dark, 'saturated' plumage with rich chestnut hues and absence of contrast between the ground colour of the mantle and that of the scapulars indicate an Icelandic bird (Oliver Smart / www.smartimages.co.uk). 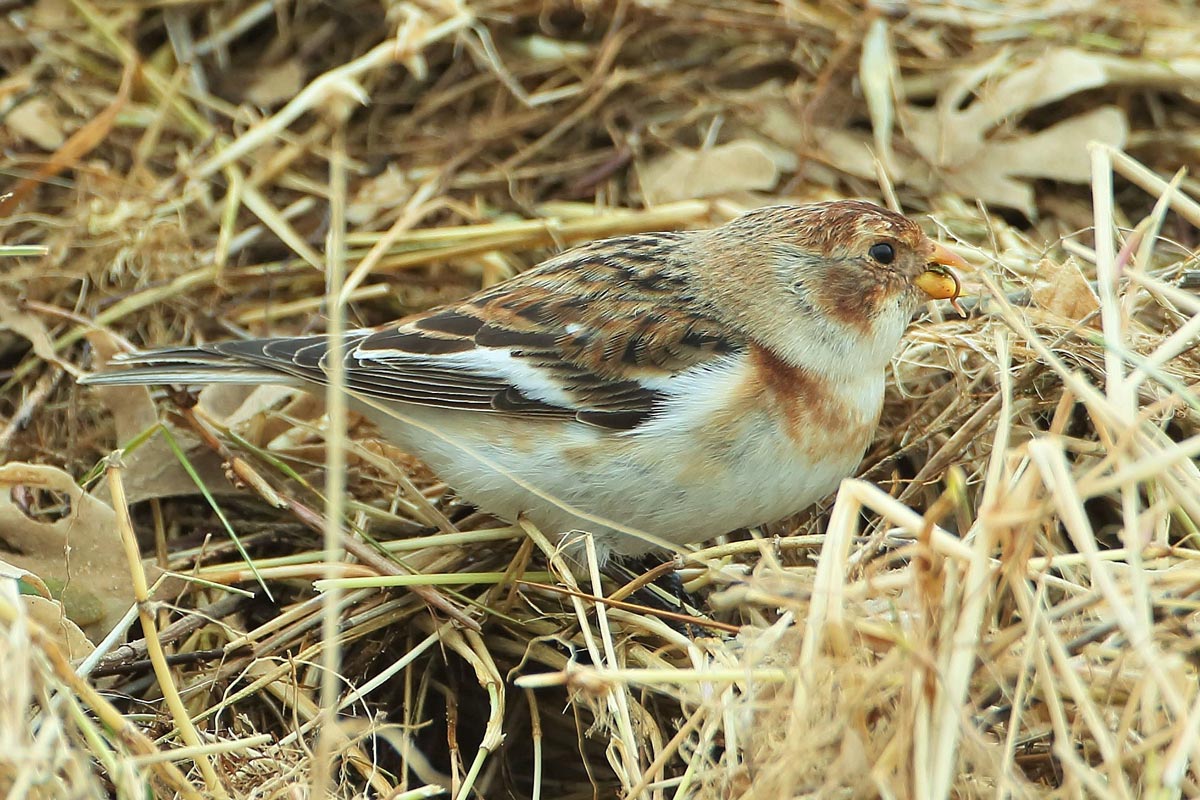 Snow Bunting (Thornham, Norfolk, 10 March 2018). This winter-plumaged bird is also a female. Note again the rather pointed shape to the dark centres to the scapulars, while the median coverts (just visible here) appear to have black centres. Other female indicators are the apparently dark primary coverts and the lack of white in the bases of the primaries. Ageing is, as is so often, problematic, with the pattern and shape of the tail feather tips again not visible, but the narrow, pointed shape of the tertials and inner greater coverts suggests a first-winter. The visible contrast between the ground colour of the mantle and that of the scapulars suggests that this could be a nominate nivalis (James Hanlon / jameshanlon.webflow.io). 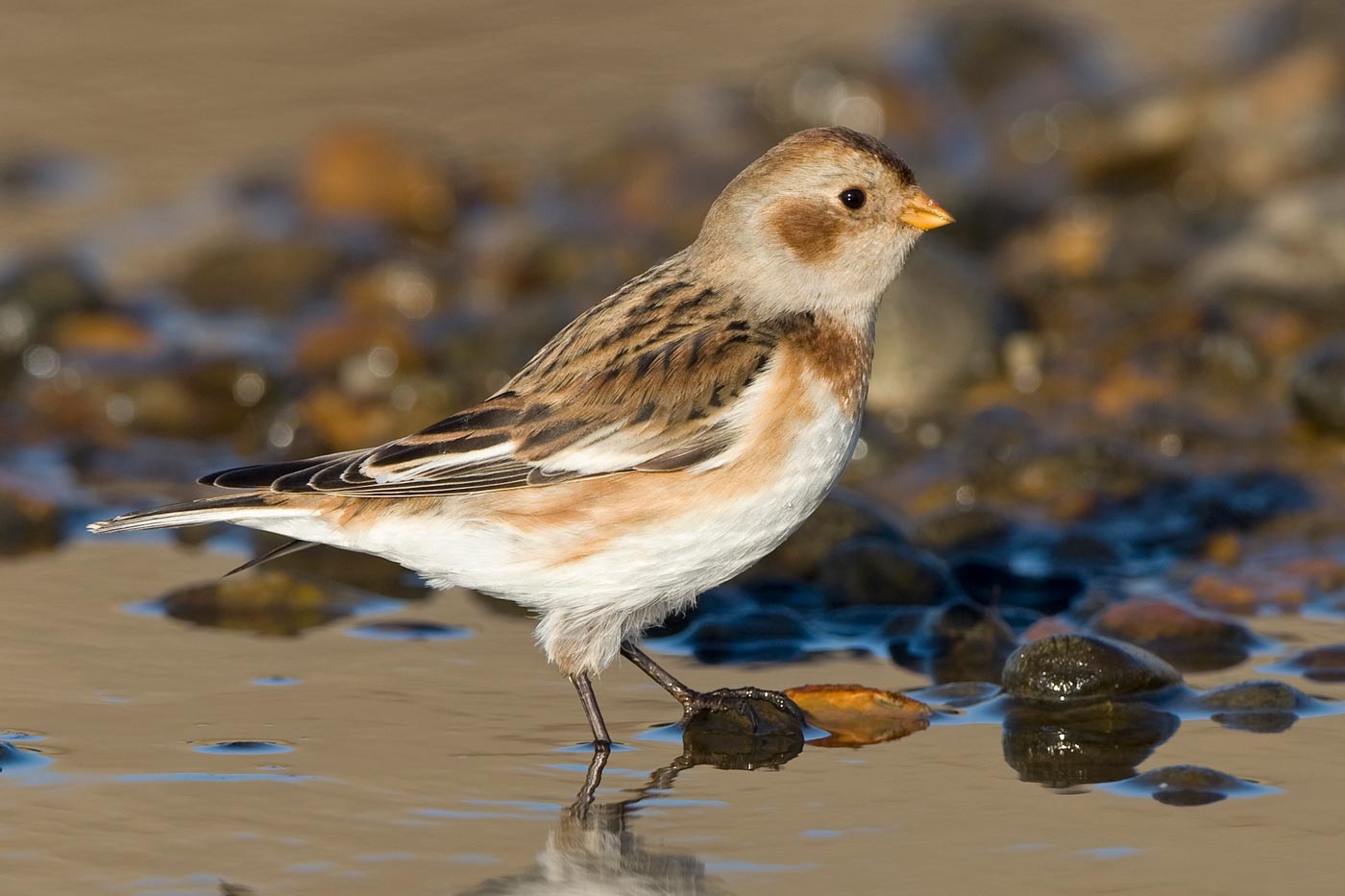 Snow Bunting (Salthouse, Norfolk, 12 February 2008). This is a first-winter female Icelandic bird, the most common plumage type encountered in Britain. Note the pointed shape to the dark scapular centres and very limited white in the wing, confirming it as a female. The pointed tips to the tail feathers identify it as a first-winter and the darkness of the head and breast markings and the dark non-contrasting mantle assign it to insulae (Robin Chittenden).