bc15c85f-c475-40f6-85c7-27cf5d42c3ee
KEEN as birders are to see genuinely wild species rather than escapes, the apparent similarity of the somewhat scarce Stock Dove and its ubiquitous ‘urban pigeon’ cousin can be frustrating. While many of the feral birds are brightly coloured and ornately plumaged, particularly if they are first-generation escapes, some can closely resemble the wild Rock Dove that still inhabits the cliff faces of north-western Scotland and western Ireland, though even these have been ‘polluted’ with domestic genes. It is these wild-looking birds that are the real confusion species with Stock Dove.

Stock Dove is a bird of woodland and suburb, but often shares these habitats with its commoner cousins. The first clue to a flock of Stock Doves is their appearance of uniformity; Feral Rock Doves tend to display some of the striking varieties of fancier’s breeds among their number, but lone Stocks or those that have infiltrated their relatives’ flocks can be picked out with care. Stock Dove averages smaller than Rock Dove, and on the ground has an overall purplish tinge that can first alert the observer to its identity. The former has a back coloration matching its head and coverts and a long paler grey lower back, rump and tail, which is tipped with black. It has two small black mid-wing patches rather than the bold bars of Rock Dove, and a pale yellow bill with a red base, as opposed to the dark grey bill of Rock. Stock has a brighter more metallic green neck, and a plainer pink tinge to the foreneck.

In flight, Stock Dove shows a large grey wing-patch shading from darker mauve-grey greater coverts to paler grey lesser coverts, and a thick black border stretching from the secondaries round to the forewing, which is obvious even on brief views. The underwing is the same dark purplish-grey which merges with the underparts to give a consistent colour reminiscent of the larger, long-tailed Woodpigeon. Feral Rock Dove will show a small pale grey patch above the rump which is diagnostic, and typically a striking white underwing.

At breeding sites, Stock is overwhelmingly more likely to be found nesting in holes in trees, though this has seen them perhaps edged out by Ring-necked Parakeet in some areas. Their song is a monotonous oo-oooo (dropping slightly in pitch at the end), while Feral Rock Dove utters the more familiar drroo-oo heard continuously in towns across the country. 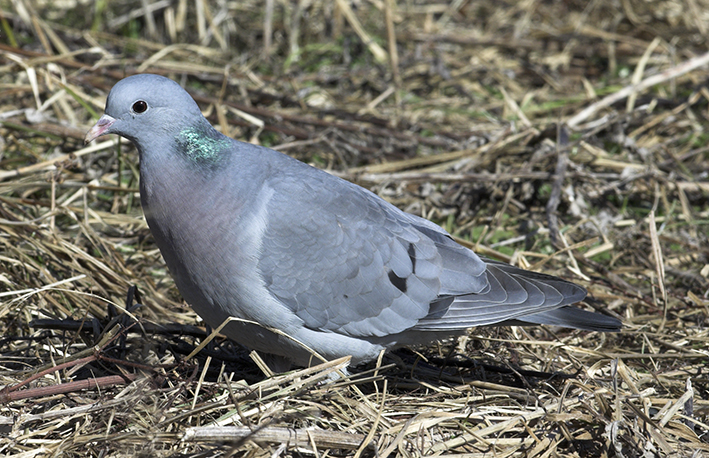