Ferruginous Duck is an increasingly rare visitor to Britain and Ireland from the Continent, and a great find on any local patch. Although relatively distinctive in appearance, it can be overlooked among rafts of Tufted Duck and Common Pochard, and the possibility of hybrids and escapes also needs to be considered.

The species' large but somewhat fragmented breeding range extends from central, eastern and south-eastern Europe through Turkey and parts of the Middle East to Central Asia and China. In the Mediterranean there are isolated breeding pockets westwards to Spain, where it is very rare, and also from Libya to Morocco; it occasionally breeds in France (Mitchell 2017, Reeber 2015). Its winter range is more extensive, but it is still absent from much of north-west Europe. 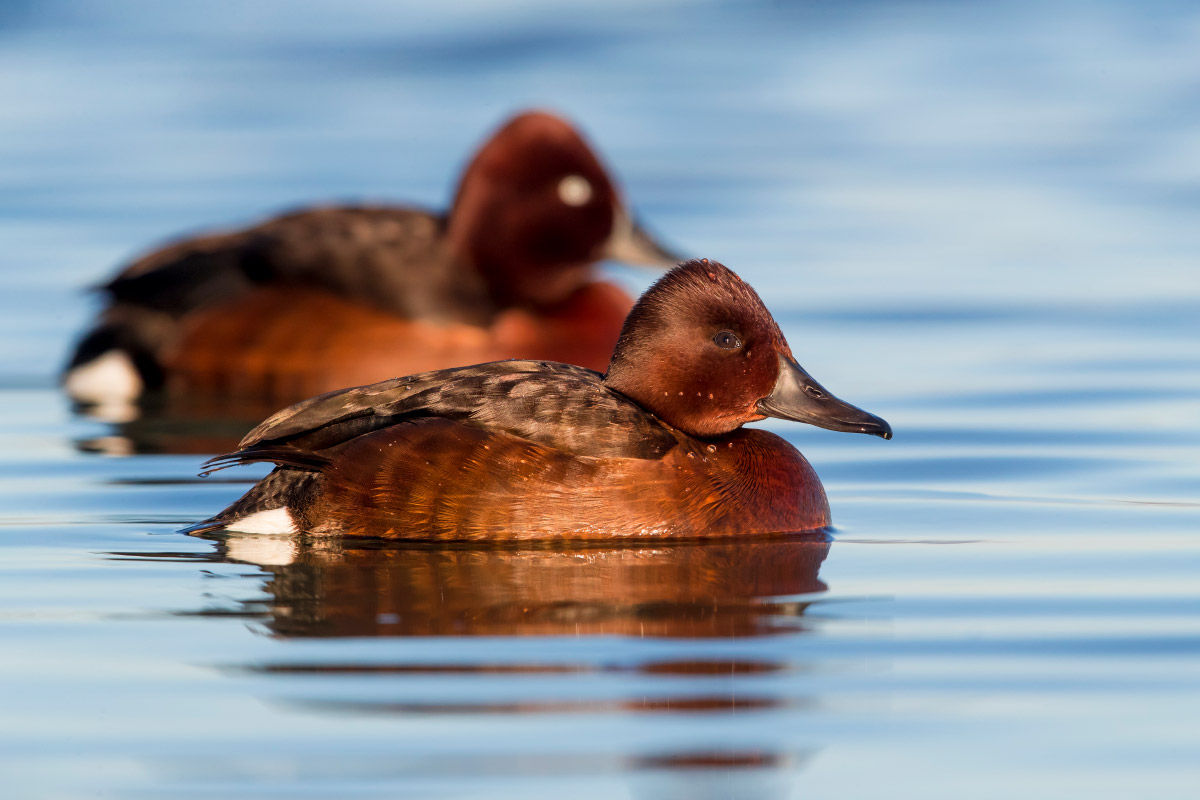 Adult female (foreground) and adult male Ferruginous Ducks (Florence, Italy, 11 March 2017). This beautiful portrait shows that despite its essentially brown plumage, Ferruginous Duck can look surprisingly bright – indeed almost colourful – in strong sunlight, when the reddish and mahogany tones are at their most eyecatching. In all plumages the white undertail coverts, unmarked in adults, are the stand-out contrasting feature. Note the richer tones of the male in the background and also its white eye; the iris is brown in females (Daniele Occhiato / www.agami.nl).

In Britain, the status of 'Fudge Duck' has see-sawed between official rarity and scarcity. It was not considered by the Rarities Committee between 1969 and 1998, on the basis that it was impossible to estimate how many related to wild individuals as opposed to widely kept, free-flying birds from collections (Vinicombe 2000). It rejoined the list of species assessed from 1999, only to be taken off again from 2006. But from 1 January 2017 records have again been considered by the Rarities Committee.

Its less frequent British appearances, which are mostly in the eastern half of England, reflect rapid and large-scale declines in continental Europe (BirdLife International 2018), but in contrast to the general trend the species may have bred in Avon in 2003, 2004 and 2006 (Davis and Vinicombe 2011). It is a much rarer bird in Ireland, with just 35 records in total, the last from Wexford in January 2011 (Fahy 2012, Hobbs 2018).

Appearances in Britain can be complicated by occasional 'fence-hoppers' from collections. The species is common in captivity and breeds readily (Reeber 2015), and a penchant for escaping in western Europe is evidenced by confiding or colour-ringed individuals at large. A colour ring is not automatically damning of origin, as there are three projects in Spain where birds are marked with white rings. However, a reintroduction programme in north-west Germany uses yellow rings, and this is now known to be the source of three individuals which put in a prolonged recent stay at Dinton Pastures Country Park, Berkshire (Walford 2017). As some collections also mark their birds with colour rings (often uncoded), it is important to try to confirm the presence of a ring and any code.

In all plumages, Ferruginous Duck is essentially dark brown or reddish-brown with white undertail coverts. Males are brighter and more richly toned, appearing more reddish or with deep chestnut or mahogany hues, especially in bright sunlight. Females are darker and duller but may also seem reddish tinged in good light, while juveniles are dullest brown overall.

Broad white wing-bars across the secondaries and primaries are striking in flight, as are white underwings and (in adults) bellies. Adult males are distinctively white eyed, whereas females and juveniles have browner eyes which appear dark at any distance. The head shape is rather peaked and the longish bill is grey, becoming paler behind a black nail.

The possibility of confusion with female and especially juvenile Tufted Duck, and with certain hybrids, is the main risk. Tufted Duck typically shows at least a hint of a tuft in these plumages, and more often than not an obvious short tuft on the hindcrown. This may be flattened in birds that are diving repeatedly, however, or not visible at all when they are asleep. Some Tufteds also show white undertail coverts, further recalling Ferruginous Duck, and occasional females can appear more warmly toned than the typical dark earth-brown hues of this species. The slightly shorter white wing-bar (not extending to the outermost primaries), squarer head shape, yellow iris and different bill pattern should help separate most problematic Tufteds.

Exotic species which have escaped from captivity may also need to be considered, particularly two Antipodean Aythyas.

New Zealand Scaup is a recognised escape on Category E of the British Ornithologists' Union's British list. It has broadly similar plumage tones to Ferruginous Duck, but lacks the white undertail and has a more extensive black bill-tip. Additionally, adult males have a blue-green head sheen and females often a white 'nose band', recalling female Tufted.

More closely resembling Ferruginous Duck is Hardhead (or White-eyed Pochard), a species native to Australia and kept in captivity, though not yet listed in Category E. It is a relatively large Aythya, with rich brown head and body plumage and white belly, undertail, wing-bar and eye colour all recalling Ferruginous. Other than size the key distinction is bill pattern, Hardhead having a dark greyish bill with a broad pale bluish band across the tip and a black nail.

Interestingly, New Zealand Scaup is known to have hybridised with Ferruginous Duck and particularly Hardhead in captivity, so in theory some nightmarish Aythya crosses exist. In practice, however, you are much more likely to need to separate a candidate Ferruginous Duck from its commoner native congeners or their hybrids. 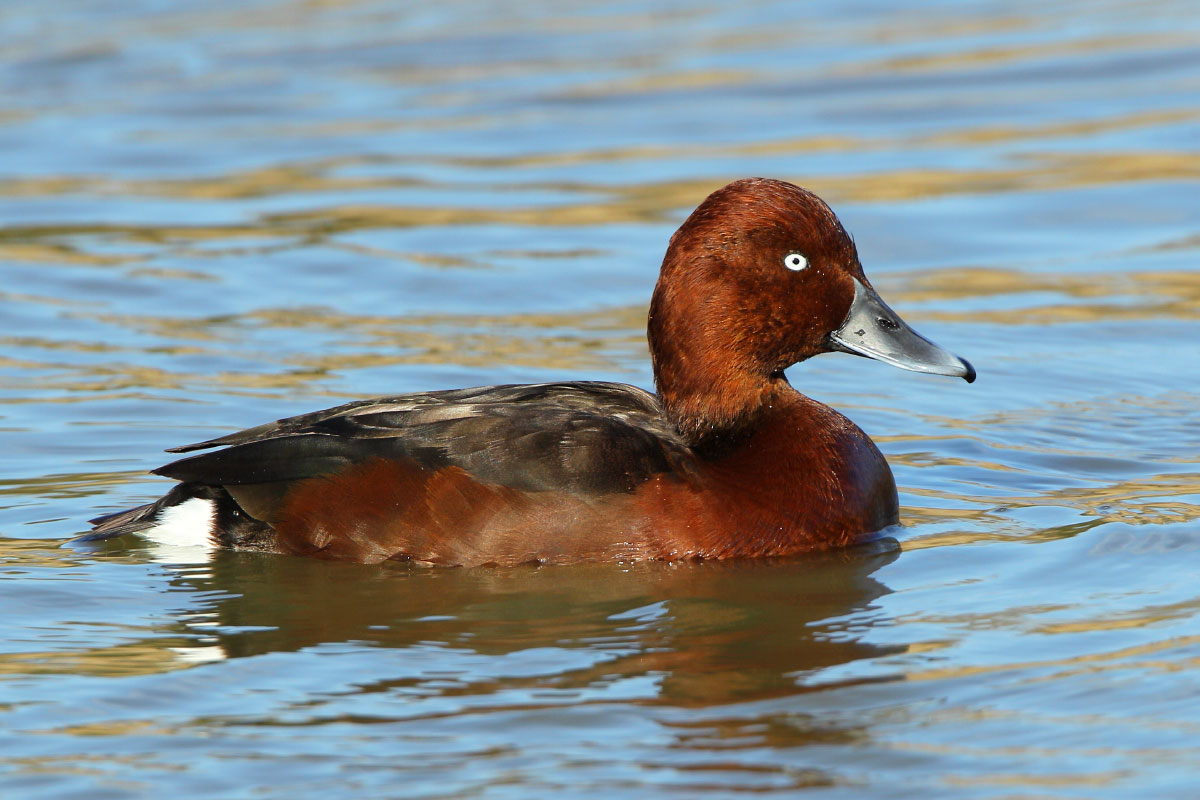 Adult male Ferruginous Duck (Camargue, France, 10 December 2011). A close-up view reveals that, as well as the male's distinctive white iris, the mantle and scapulars are somewhat darker brown than the rest of the plumage. It's only hinted at in this image, but there is a narrow dark neck collar, most visible when the neck is outstretched. Note also that the white undertail coverts are framed by black, and the bill is lead-grey with a fine black nail (Aurélien Audevard). 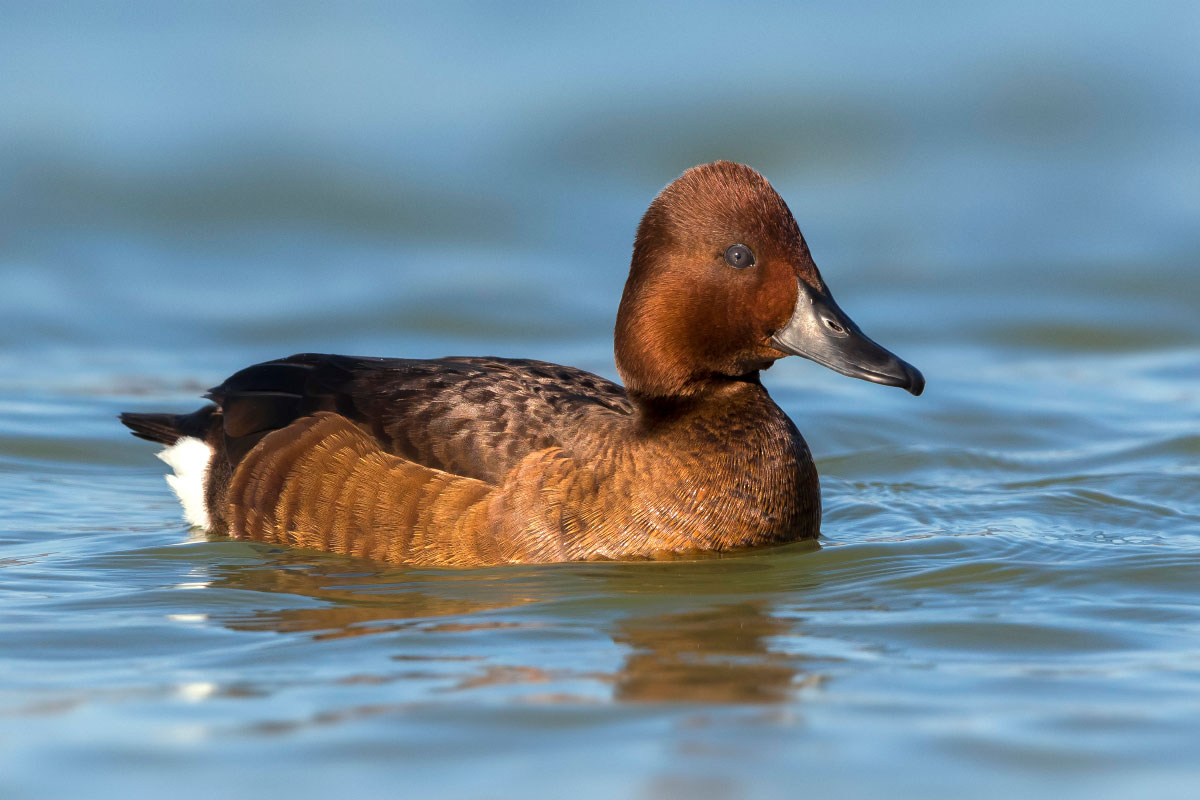 Adult female Ferruginous Duck (Florence, Italy, 27 December 2017). Overall the sexes are similar, but females are a duller brown with reduced reddish tones. The brown iris immediately confirms this bird is a female, but note also that the bill is a darker grey than the male's in photo 2 above, albeit still with a blackish nail (Daniele Occhiato / www.agami.nl). 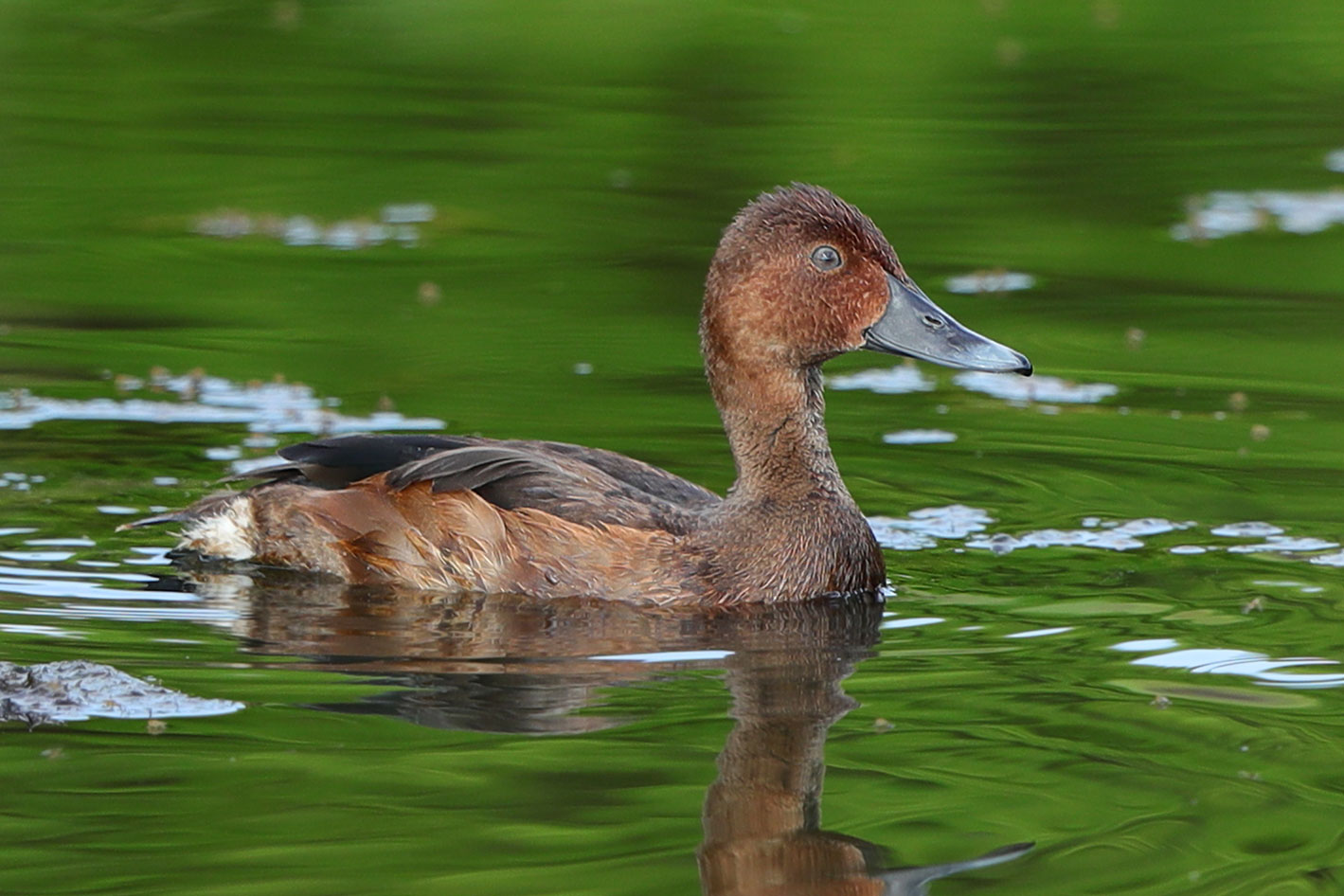 Juvenile Ferruginous Duck (Camargue, France, 5 August 2018). Juveniles have the dullest brown plumage, and young birds are therefore most likely to be overlooked or mistaken for female or juvenile Tufted Duck. However, there are still slight reddish hues in the plumage, while the black nail on the dark grey bill confirms this is the rarer species. This bird can be aged as a juvenile by the 'sullied' white undertail coverts and sepia iris (Aurélien Audevard). 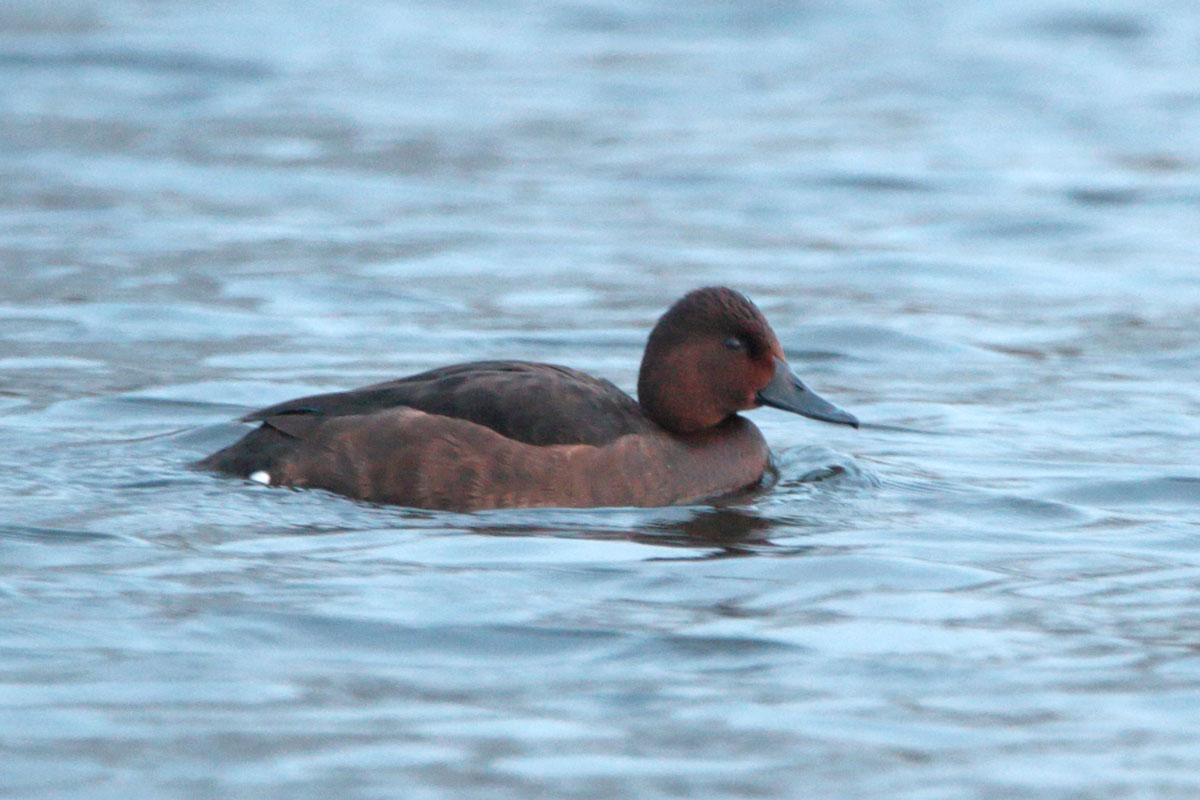 First-winter female Ferruginous Duck (Burgess Park, Greater London, 28 November 2010). With its tail pressed down into the water and white undertail coverts barely visible, this bird appears featureless and drab. The body is dark brown and the head darker still, though with a slightly reddish hue. Eye colour points away from Tufted Duck and so too does structure, this bird showing the typical peaked crown profile of Ferruginous Duck. Size can't be judged in this image, but in real life this bird was slightly smaller than nearby Tufted Ducks, with a somewhat narrower bill (James Lowen / www.jameslowen.com). 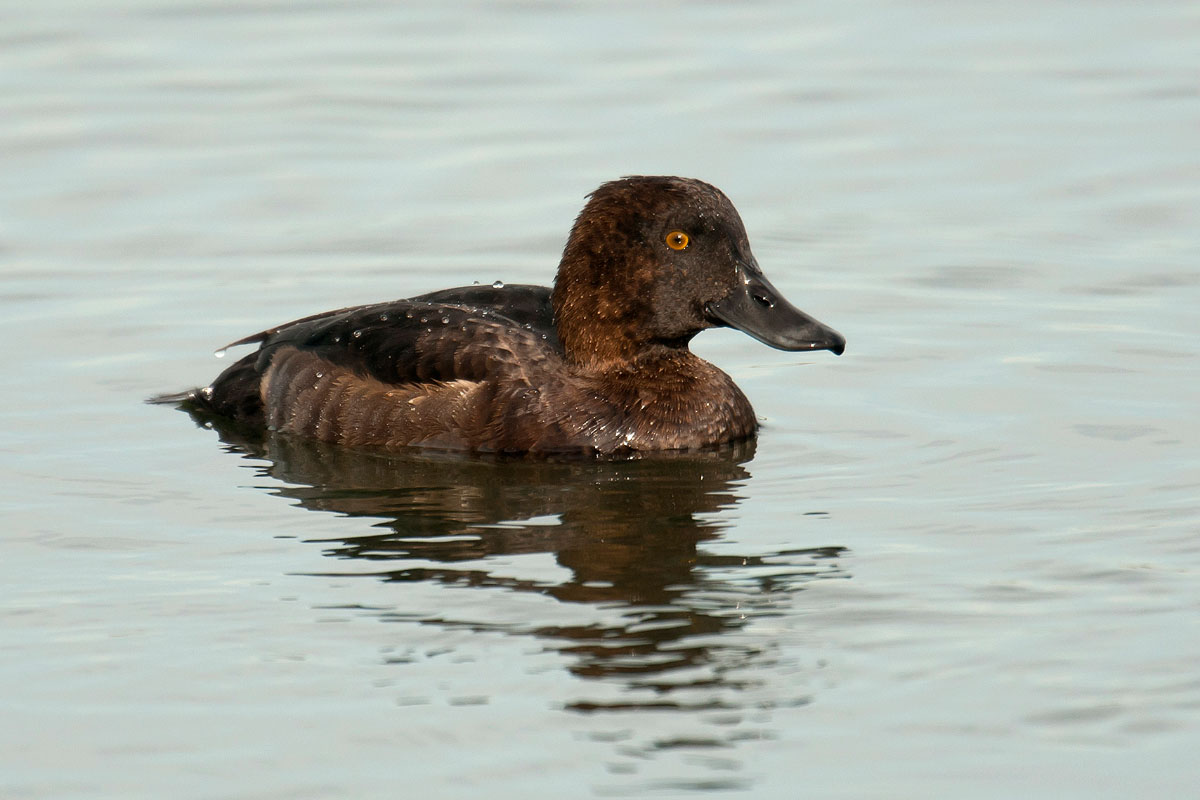 Juvenile/first-winter Tufted Duck (Seaforth, Lancashire, 7 October 2009). This bird has clearly been diving actively, so while there is little suggestion of a tuft the feathers on the back of the head are wet and flattened down. The undertail seems dark, but at this angle it is difficult to be certain. However, the yellowy-brown iris, broad bill lacking a discrete dark nail and the squarish rather than peaked head shape all point to a young Tufted Duck (Steve Young / www.birdsonfilm.com). 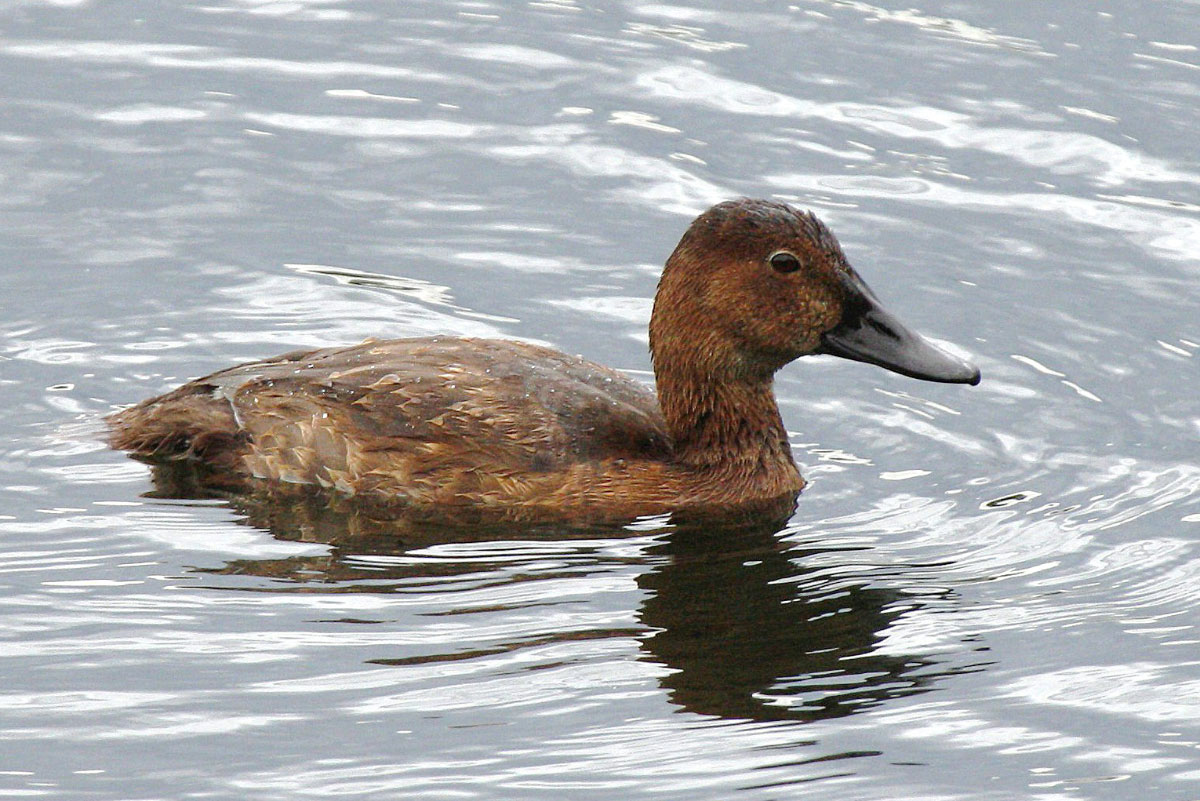 Juvenile Common Pochard (Rye Meads RSPB, Hertfordshire, 6 August 2011). The rather uniform tones of this juvenile Aythya might well attract attention – compare it to the similar juvenile Ferruginous Duck in photo 4. However, it is slightly paler and lacking in distinct reddish hues, the bill is a dull dark grey with no contrasting black nail, and most importantly the undertail coverts are not white, yet the tail-tip is paler – all features indicative of juvenile Common Pochard (James Hanlon). 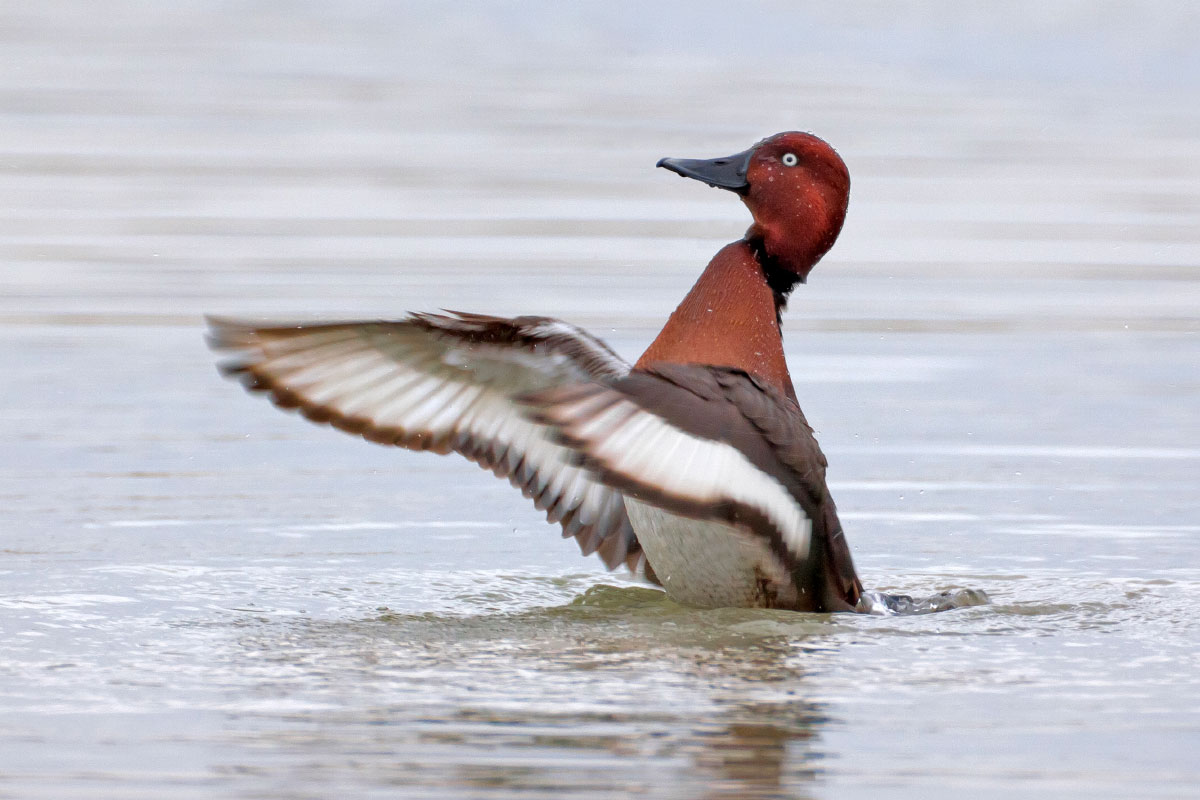 Adult male Ferruginous Duck (Florence, Italy, 15 March 2011). When wing-flapping or in flight, Ferruginous Duck transforms into a bird of striking contrasts. There is extensive white in the wings, with a broad white bar across the primaries and secondaries offset by dark brown coverts and trailing edge, dark-framed whitish underwings and a clean white belly in adults (buffer and dark spotted in juveniles) (Daniele Occhiato / www.agami.nl). 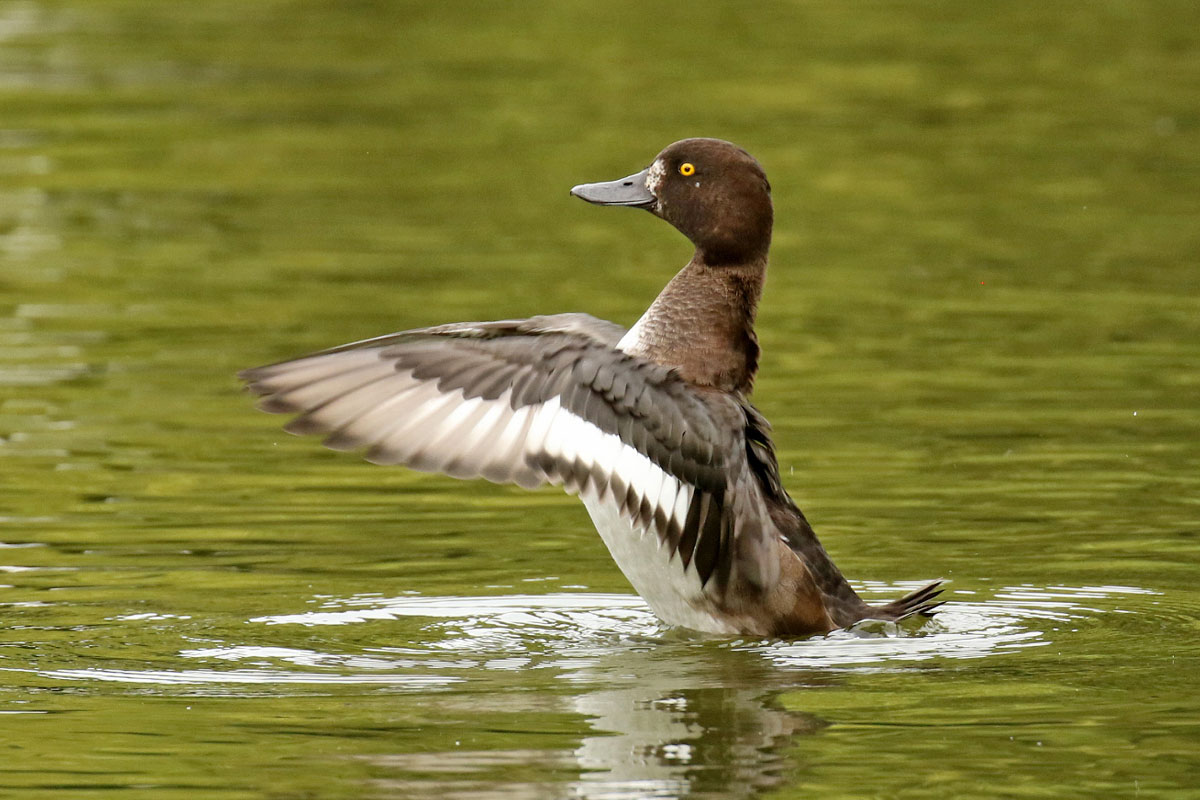 Adult female Tufted Duck (Alexandra Park, Greater London, 16 September 2018). The overall plumage pattern is very similar to Ferruginous Duck, with bold white wing-bars extending across the secondaries and most of the primaries, whitish underwings (not visible here) and a clean white belly patch. The plumage is dark earth-brown rather than reddish-brown, however, while the whitish 'noseband' feathering and bright yellow iris confirms this to be an adult female Tufted Duck (Dominic Mitchell). 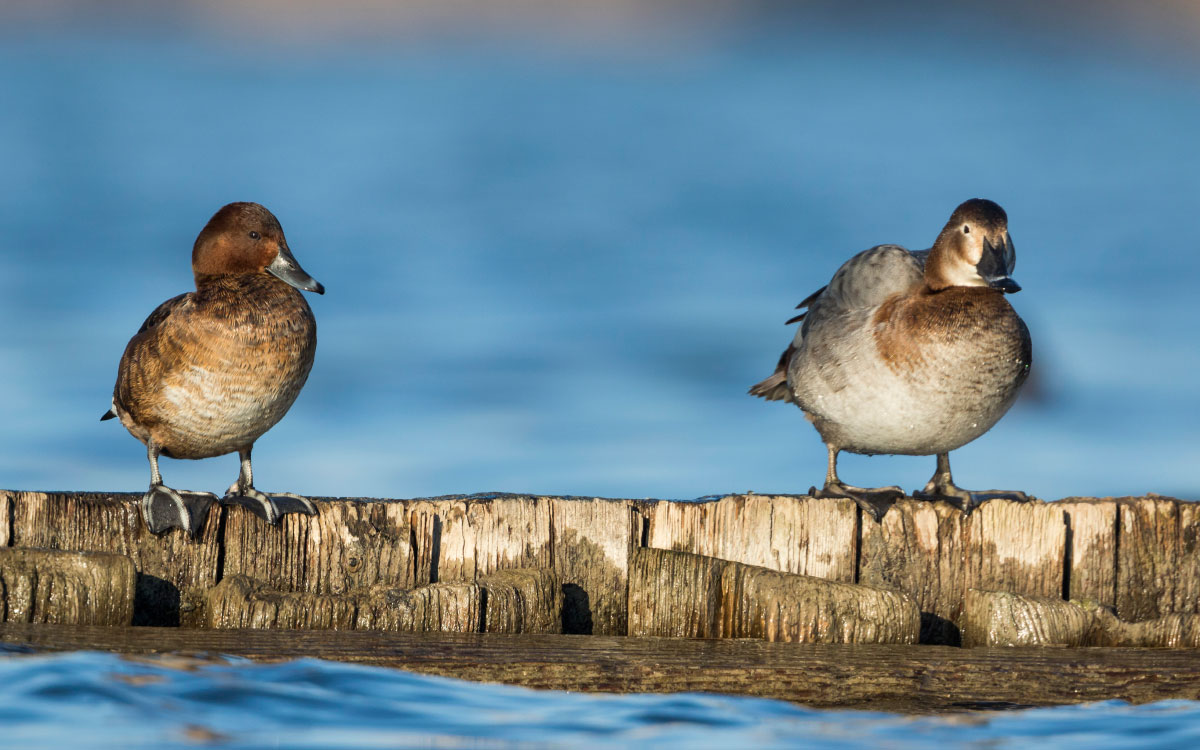 First-winter female Ferruginous Duck (left) with first-winter female Common Pochard (Germany, 25 February 2015). Ferruginous Duck is closer in shape to Common Pochard than to Tufted Duck, but is smaller and less bulky than both. The difference is discernible in this image, which shows a rather nondescript Ferruginous Duck with its commoner congener. Its dull brown plumage and lack of a clear white belly patch age it as a first-winter, while the brown iris in late winter indicates a female; note also that the black on the tip of the bill extends to the sides of the nail, as is typical for immatures of this species (Daniele Occhiato / www.agami.nl). 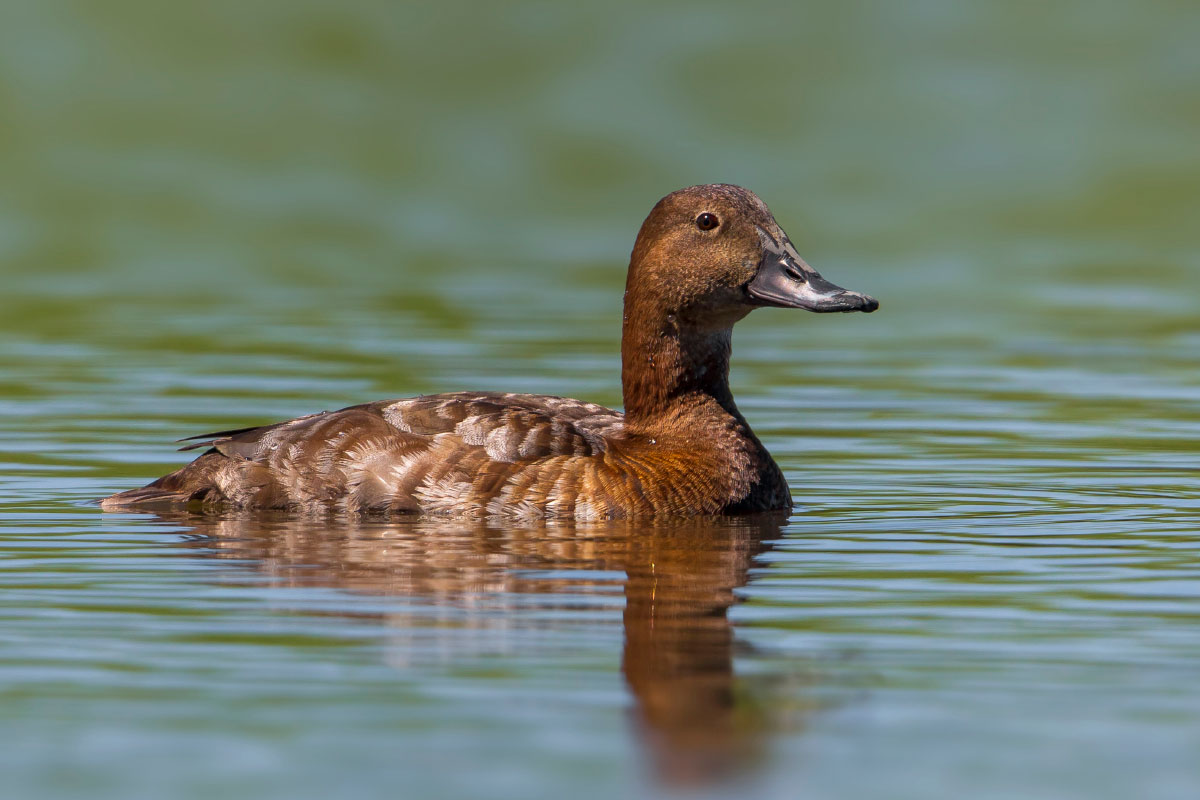 Female Common Pochard (Florence, Italy, 13 May 2013). Although the head and breast are rather uniformly brown, the flanks and upperparts are mixed with paler, greyer feathers – not a feature of Ferruginous Duck at any age. With the tail held down onto the water the undertail coverts are largely hidden, but the bill pattern and structure, as well as head shape, confirm this is a female Common Pochard (Daniele Occhiato / www.agami.nl). 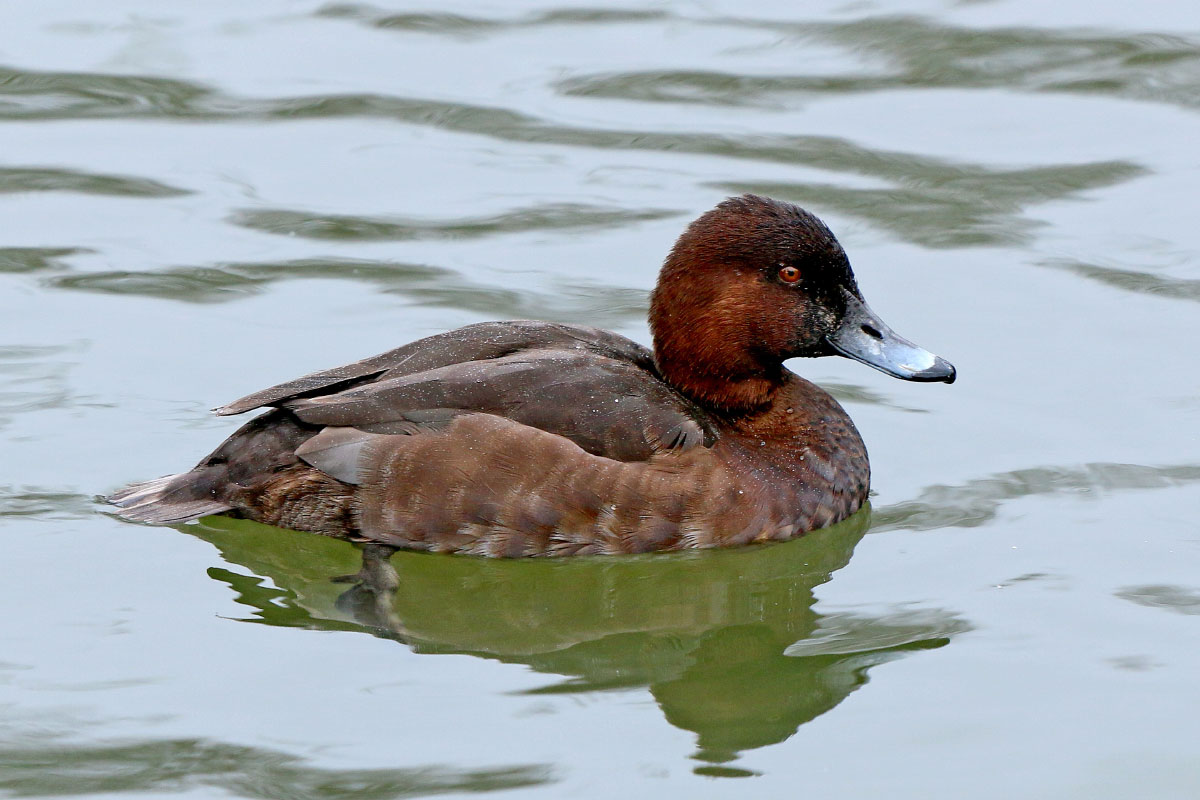 Hybrid Ferruginous Duck × Common Pochard (Alexandra Park, Greater London, 26 March 2015). In western Europe, Ferruginous-like hybrids are said to be commoner than pure individuals. The reddish-brown plumage of this Aythya indicates Ferruginous Duck influence and suggest a female, yet the reddish iris and blue-grey bill with a paler subterminal area behind a broad black tip are characters of male Common Pochard. Determining the exact parentage – and sometimes sex – of such birds can be difficult, and this may be an 'intersex' hybrid or an old female (Dominic Mitchell). 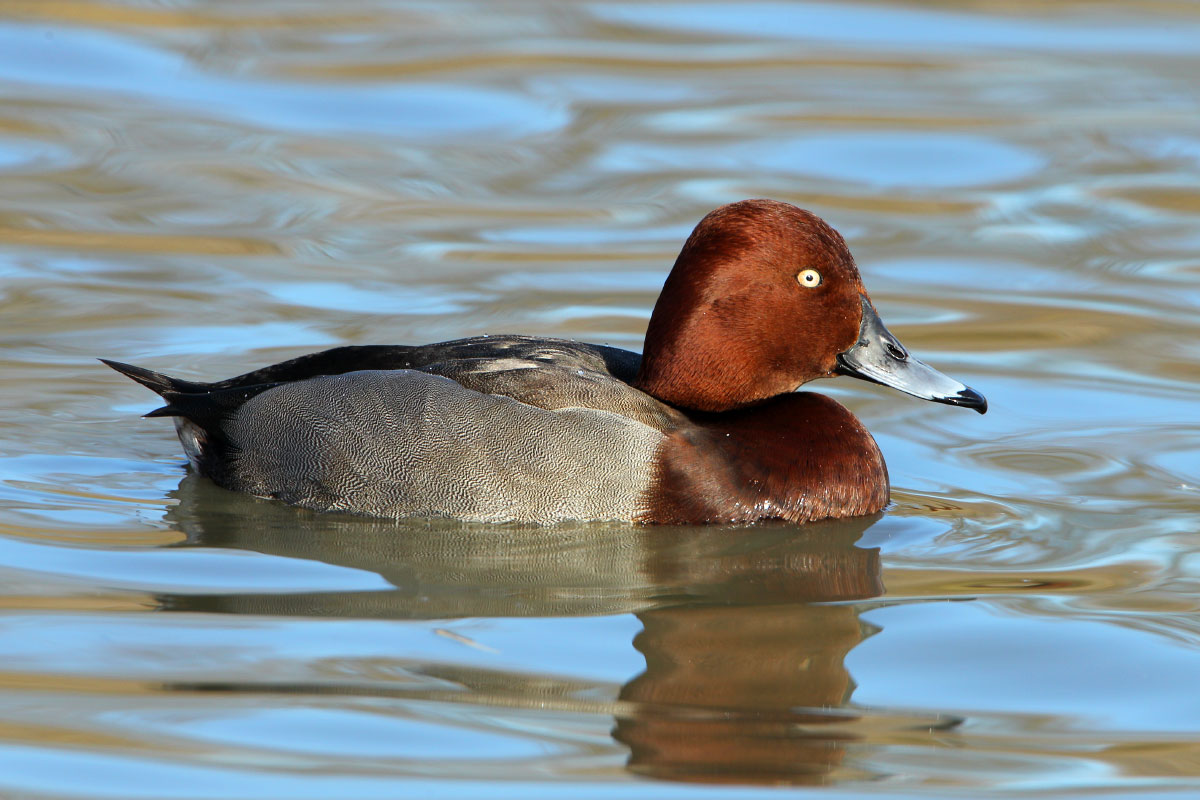 Hybrid Ferruginous Duck × Common Pochard (Camargue, France, 10 December 2011). This is perhaps a more obvious hybrid. The whitish iris recalls male Ferruginous Duck, but the bill pattern suggests male Common Pochard. The vermiculated flanks and upperparts are darker grey than in that species, and the breast is dark reddish-brown rather than black – all features indicative of its mixed parentage (Aurélien Audevard). 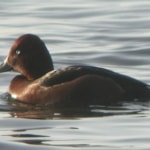