Icelandic Whimbrels fly non-stop to and from Africa

A new study, published in the open-access journal Scientific Reports, has found that Icelandic-breeding Whimbrels execute rapid non-stop migrations to and from their wintering grounds in West Africa.

To examine the birds' migration strategies, the researchers fitted geolocators to 10 Whimbrels on their Icelandic breeding grounds in June 2012. In June 2013 seven of the 10 tagged birds were recorded back on their territories, and data was retrieved from four tags.

The data found that all four Whimbrels flew non-stop to their wintering grounds in West Africa in autumn 2012, covering distances of ~3,900–5,500 km in just five days and, on occasion, achieving the fastest recorded speeds for terrestrial birds on long-distance flight over oceanic waters (up to 18–24 m s–1, or 40–54 mph).

Though wind support could help the birds complete such non-stop flights, the tagged Whimbrels faced headwinds up to twice their ground speed, suggesting that unfavourable and potentially fatal weather conditions are not uncommon on such crossings. It seems that apparently high-risk migrations such as this might be more common than previously thought, with potential fitness gains outweighing the costs, even though mortality by exhaustion is a very realistic threat.

The study cites issues associated with predicted climate change, particularly changes in regional-scale wind patterns, which may affect bird populations that regularly undertake non-stop long-distance flights over unsuitable habitats. It points to the need for variation in migration strategies within the same populations to contend with and overcome future changes.

Scientists' ability to track migration using geolocators continues to provide new insights into the extraordinary capacity of birds to move extremely quickly over very large distances, by continuously sustaining endurance exercise during several days, and Whimbrel is the latest species to add itself to the list of eyebrow-raising feats discovered by this method in recent years. 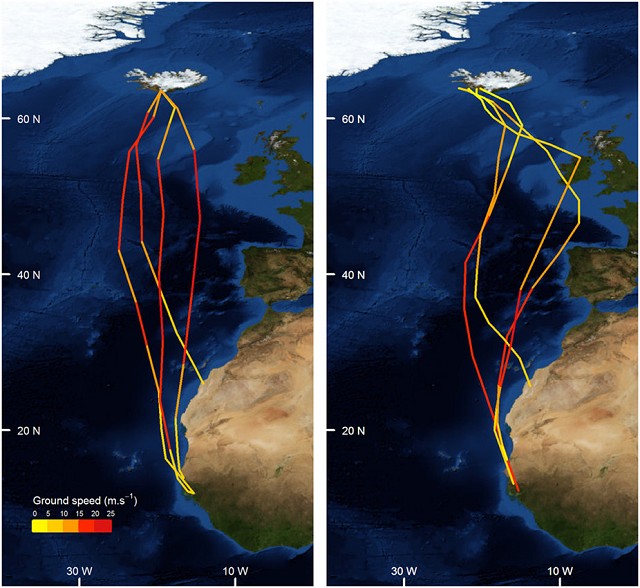 Geotracked migratory routes of four Icelandic Whimbrels between breeding sites in Iceland and wintering areas in West Africa during post-nuptial/autumn (left) and pre-nuptial/spring (right) migration. Track sections are coloured as a function of ground speed. All individuals flew non-stop in autumn while two made a stopover in the UK or Ireland in spring.