Owned by The Wildfowl & Wetlands Trust (WWT), the London Wetland Centre in Barnes, south-west London, has long been recognised as one of the capital's top birding sites. To date, no fewer than 254 species have been recorded. Many birders will no doubt already be familiar with the site as the location of London's first (and to date only) Desert Wheatear: a male in April 1989. The London Wetland Centre has been my patch since 2007 and I am fortunate enough to currently be the reserve warden. 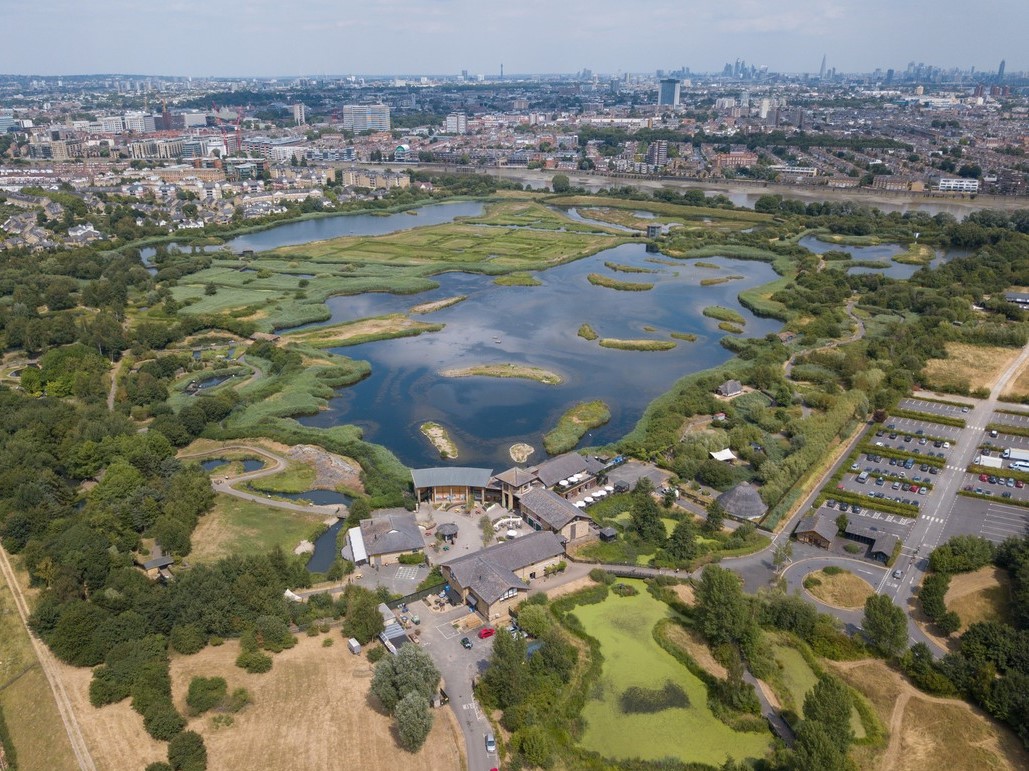 The London Wetland Centre was formerly Barn Elms Reservoirs, which were a series of four concrete basins owned by Thames Water. After the reservoirs were decommissioned in 1989 the site was developed into a reserve by the WWT in 1995. The reserve opened to the public in 2000 and in January 2002 was designated as a SSSI, in recognition of its nationally important numbers of wintering Northern Shoveler and Gadwall, alongside its outstanding assemblage of breeding wetland birds of lowland open water.

The reserve itself consists of 42 ha of predominately wetland habitat comprising a series of lakes, open channels, shingle and soft substrate islands, reedbeds, a wader scrape (which is flooded and drained fortnightly to simulate a tidal habitat) and, at the centre, a seasonally flooded grazing marsh. There are six hides spread across the reserve, two with multiple levels providing height to gain prime vantage points, in addition to the main observatory that provides a fantastic view across the main lake with the London skyline as a backdrop. 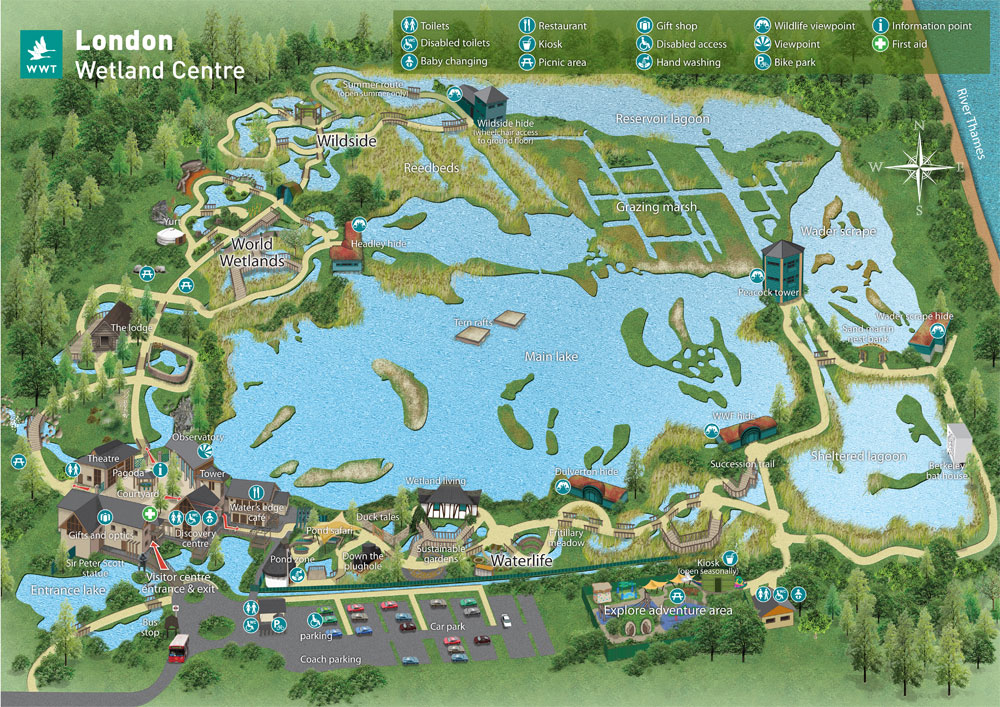 If the London Wetland Centre is synonymous with one species in particular, it's Eurasian Bittern. The reedbeds can host up to six wintering individuals of this cryptically plumaged member of the heron family, and is one of the best sites in the UK to observe the species at close range, allowing for detailed observations of this usually challenging bird. The best days to obtain good views are those with cold but sunny conditions; during this time the birds will often sit up in the reeds basking in the sun, occasionally even venturing out onto open ice when the waterbodies freeze over.

Large numbers of waterfowl over-winter on site with Eurasian Teal, Mallard, Common Pochard, Eurasian Wigeon, Tufted Duck, Northern Shoveler and Gadwall making up the bulk of the ducks, alongside a handful of Northern Pintail and occasional Common Goldeneye. Water Rail can be found in good numbers across the sites reedbeds, with 2020-21 survey results producing a minimum of 15 wintering individuals. 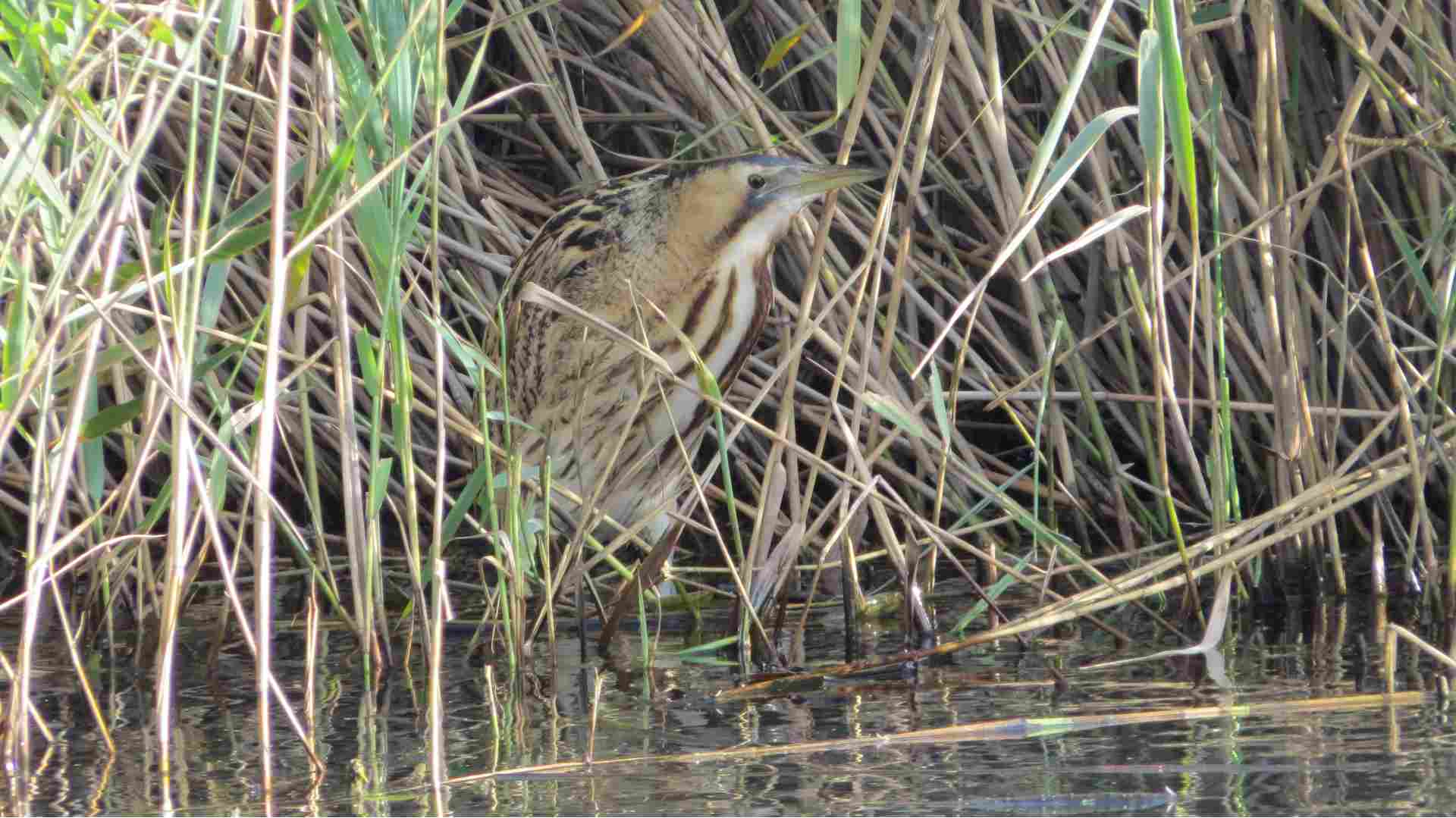 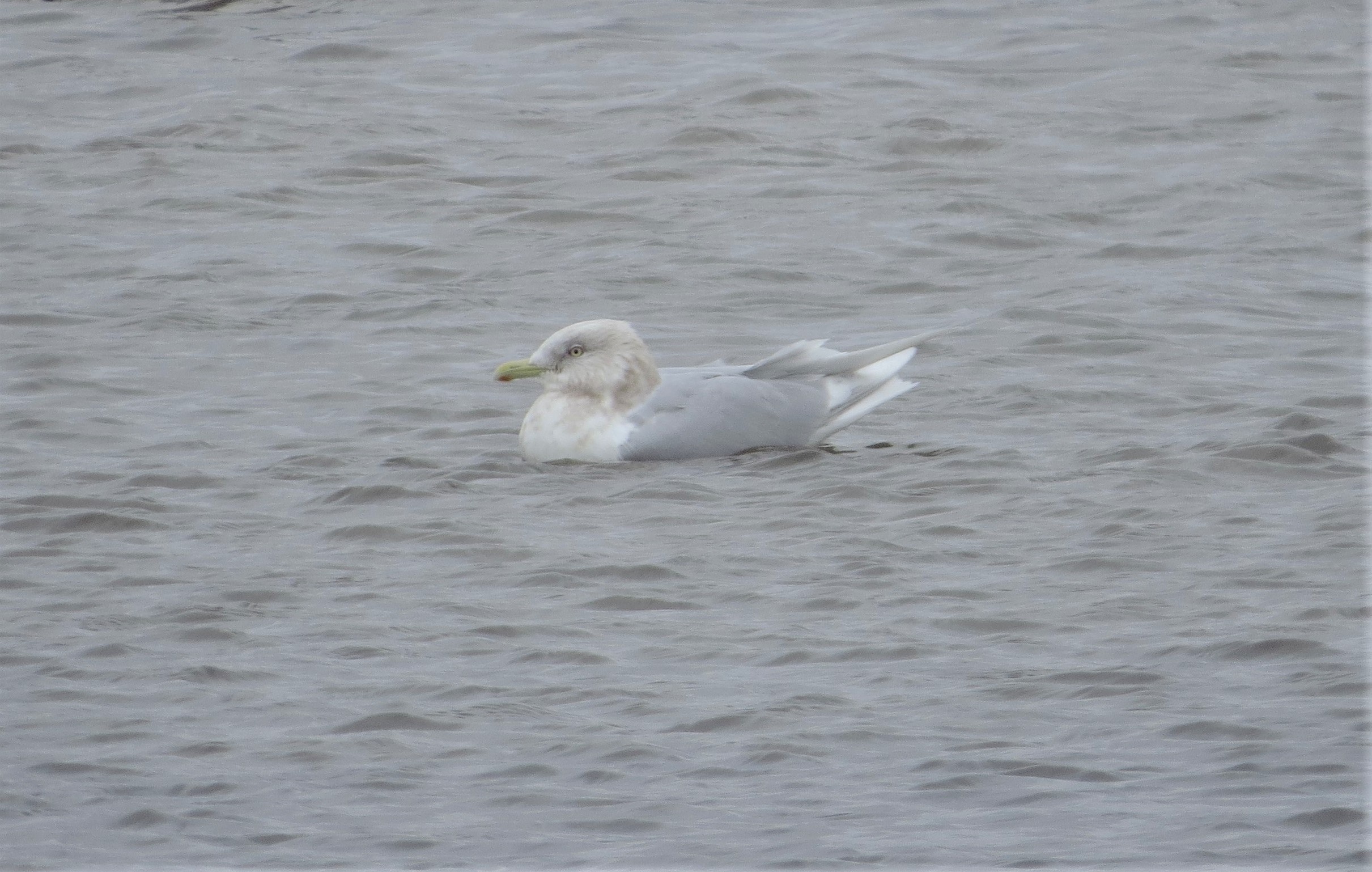 Gulls are at the forefront of my mind during the winter months, with the site having recorded 12 species in the past four years alone. There are now regular records of both Caspian and Yellow-legged Gulls, while the scarcer Iceland and Glaucous Gulls are also possibilities within the daily large winter gatherings of European Herring, Lesser Black-backed, Great Black-backed, Black-headed and Common Gulls. Water Pipits are annual on the flooded grazing marsh, often peaking at three or four individuals in midwinter, with the same area also productive for Common and Jack Snipe. Scarcities during this time of year have included Bewick's Swan, Russian White-fronted Goose, Waxwing, Mealy Redpoll and Dark-bellied Brent Goose.

By mid-March the scrapes and grazing marsh come alive with the sounds displaying Northern Lapwing and territorial Common Redshank – quite an incredible soundscape considering the site is situated within four miles of Westminster! Usually 10 or more pairs of lapwing, and on average two pairs of redshank, attempt to breed across the reserve, alongside one or two pairs of Little Ringed Plover and, for the last two years, a prospecting pair of Eurasian Oystercatchers.

Spring passage can vary from year to year but is often incredibly rewarding. Over my time birding at the London Wetland Centre I have personally recorded 25 species of wader during this period, including Temminck's Stint, Spotted Redshank and Bar-tailed Godwit. Wood Sandpiper, Whimbrel, Ringed Plover and Greenshank are annual, with scarcer waders on spring passage including Ruddy Turnstone, Avocet, Red Knot and Ruff. 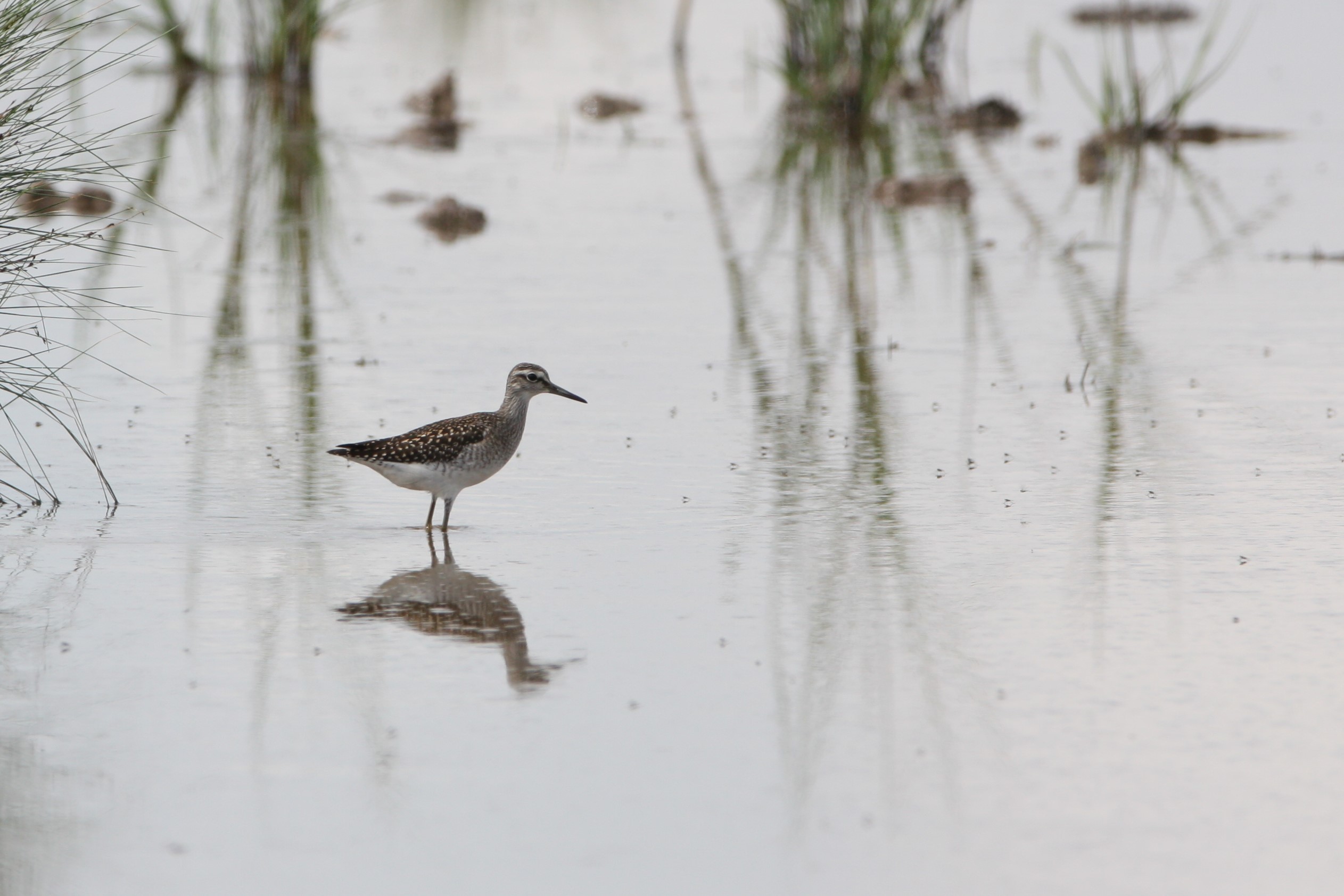 Wood Sandpiper is possible during both spring and autumn passage (J Klavins).

A particularly memorable day came in the second week of April 2015. Having that morning had a stunning summer-plumaged Grey Plover on the grazing marsh, I decided to have another scan during my lunchbreak. The Grey Plover was still present, but had been joined on the marsh (and indeed completely upstaged!) by a Eurasian Stone-curlew; only the second record for the site. Patch gold!

Away from waders, spring also attracts good numbers of migrant passerines to the site. Northern Wheatears are regular along the reserves fencelines, often joined by Whinchat, European Stonechat and the occasional White Wagtail. Ring Ouzel is recorded in most years, primarily on spring passage with multiple birds sometimes seen in the same day. Yellow Wagtail counts often reach double figures in late April, with Blue-headed Wagtail always a possibility among them, the latter averaging a record every two years recently. Reed, Sedge and Cetti's Warbler are plentiful across the sites reedbeds, all of which breed in good numbers. Blackcap and Common Chiffchaff also occur as breeding species in the hedgerows and scrub blocks, with smaller numbers of passage Lesser Whitethroat, Willow Warbler, Common Whitethroat and Garden Warbler in April and early May.

Garganey are annual on site, often between March and May, with one pair in April 2019 remaining on the grazing marsh for almost two weeks. Alongside the species mentioned above, some stand-out highlights for the reserve over the years in spring have included rarities such as Little Bittern in May 2016 and Pacific Golden Plover in May 2010. Site scarcities in more recent years have included Little Gull, Black Tern, Eurasian Spoonbill, Black Redstart, Common Scoter and Common Nightingale. 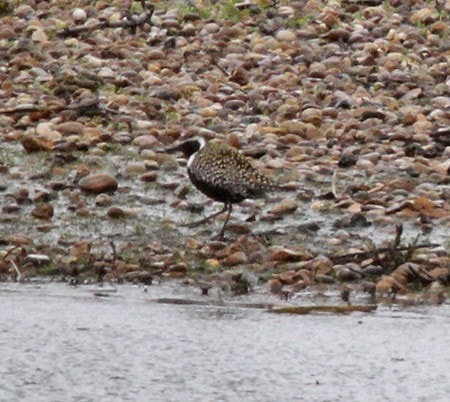 As with most sites in the summer months, the reserve tends to become quiet. Summer days birding are accompanied by the sound of Sand Martin overhead – as many as 90 pairs use the wader scrape artificial nest bank to breed each year, with some pairs raising up to three broods. This frenzy of activity doesn't go unnoticed and Eurasian Hobby can regularly be seen hunting over the reserve, occasionally pausing to rest on favoured perches around the sheltered lagoon. Small numbers of Common Tern nest in most years in among the substantial breeding Black-headed Gull flock, on the site's purpose-built rafts and islands. Mediterranean Gull records are increasing each year, too, and this is a species I think could make a breeding attempt any year now.

Even though summer can be quiet, it's still always worth keeping those binoculars firmly secured around the neck just in case. One such day for me came in June 2018. Another birder had reported a reeling warbler from the sites main reedbed, adding the possibility that it could be a Savi's Warbler. While stood waiting for what felt like an agonisingly long few minutes the bird began reeling once more – spot on Savi's Warbler: a site and vice county first! Quite incredibly we even managed to obtain decent scope views of the bird as it sat up reeling in a willow clump among the reeds. A red-letter day for many of the site's regular birders and one that will live long in the memory, all made possible by the optimism of one individual that decided to give the area a chance to produce something in early June. 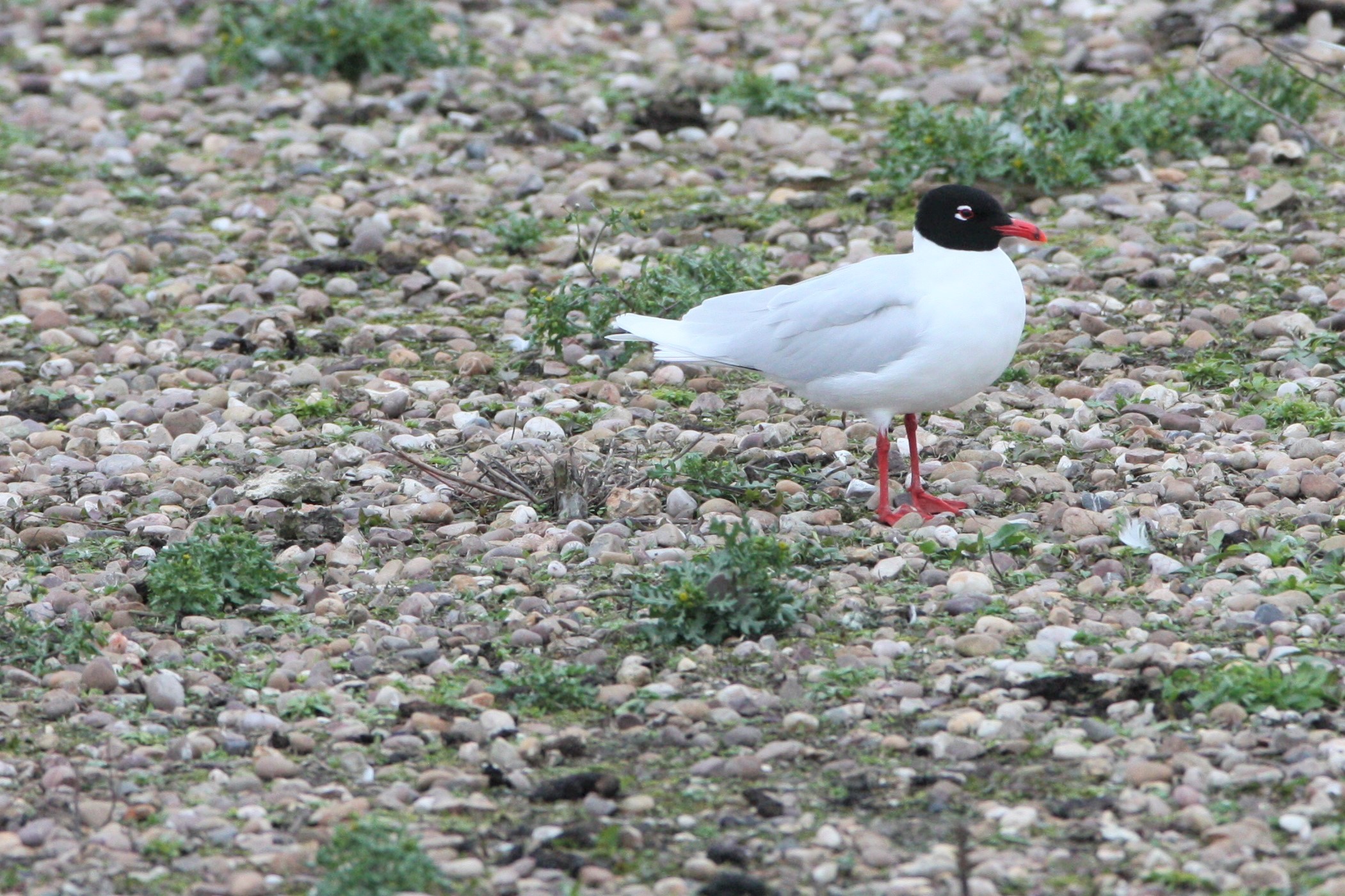 At the start of autumn the skies over the reserve's waterbodies fill with large gathering flocks of passage hirundines, comprising House and Sand Martins and Swallow. Alongside these species good numbers of Common Swift congregate, screaming overhead as they signal their imminent departure. The main lake and wader scrape are worth scrutinising for migrating waders and we often see our highest counts of Common and Green Sandpipers. At the end of June 2019, an incredible count of 41 Black-tailed Godwits was made.

The site's scrub and hedgerows can be productive, with both Common Redstart and Spotted Flycatcher recorded annually, alongside the possibility of the scarcer Pied Flycatcher. Autumn passage has also produced site rarities such as Spotted Crake, Eurasian Wryneck, Glossy Ibis, Western Cattle Egret and Short-eared Owl.

Autumn is also the best time of year for vis-migging (the process of observing passage migration of birds flying overhead) over the reserve, with some days a seemingly constant movement of passerines such as Meadow Pipit, Eurasian Skylark, Eurasian Siskin and, towards the end of season, large flocks of Redwing and Fieldfare. Such sessions can also produce scarcer species for the site, such as Crossbill, Hawfinch and Brambling. 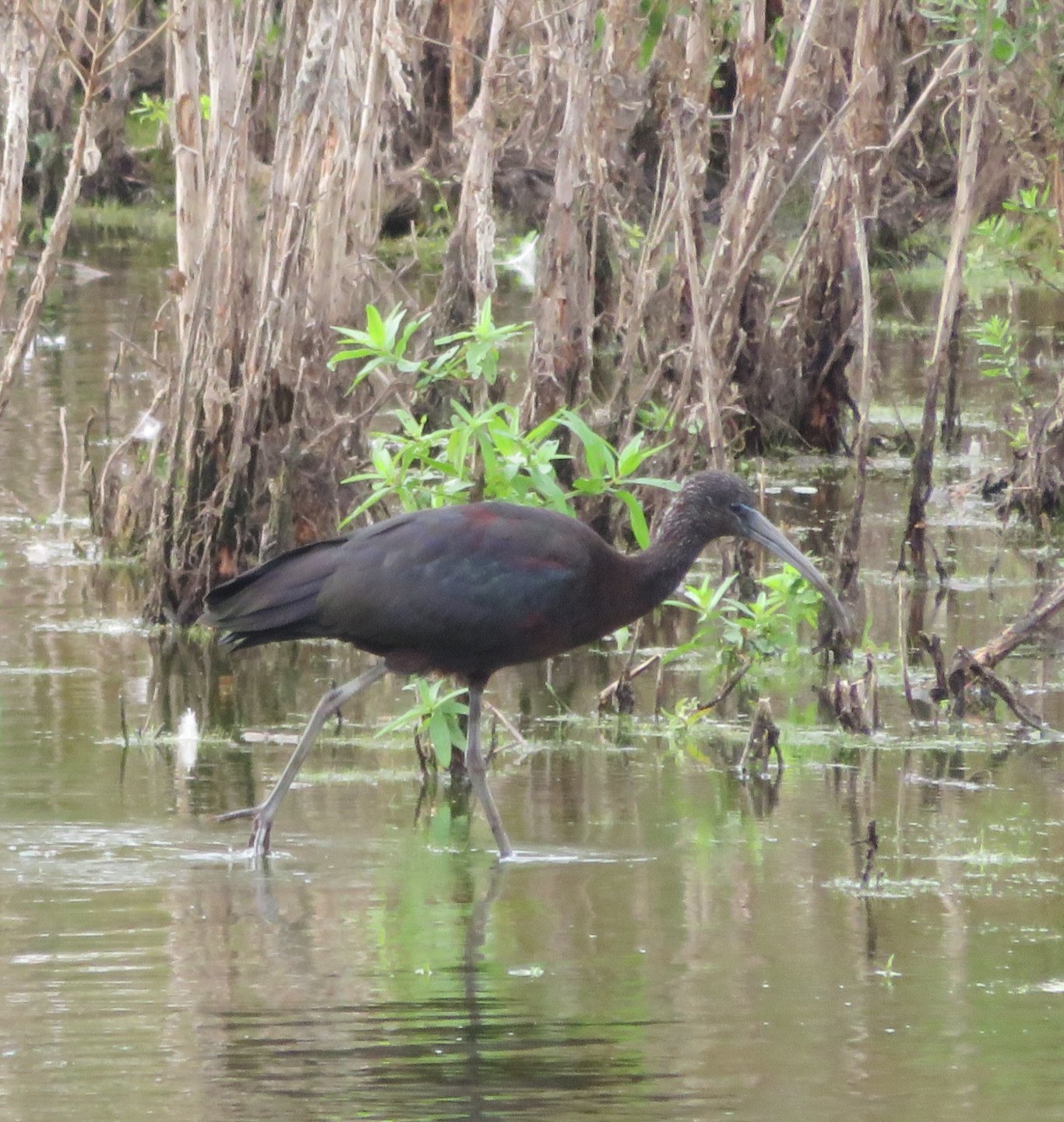 This Glossy Ibis dropped in during September 2017 (Jake Klavins).

Landlocked patch birders are always reminded that our locations should define our expectations. If having the London Wetland Centre as my patch has inspired me to challenge anything, it is this mentality. Anything can turn up anywhere. Our patches are sites to be personally treasured regardless of location and that is what by definition makes them so special. I think it's fantastic that species I would overlook at other sites as commonplace or expected, can in the heart of London recapture the very reason I became hooked on birding so many years ago. Where else in the UK would I punch the air at the sight of a Ruddy Turnstone? Or have that relentless drive to scan a field for the hundredth time, hoping that today was the day that special something would be there? Put quite simply, the patch is where it's at!