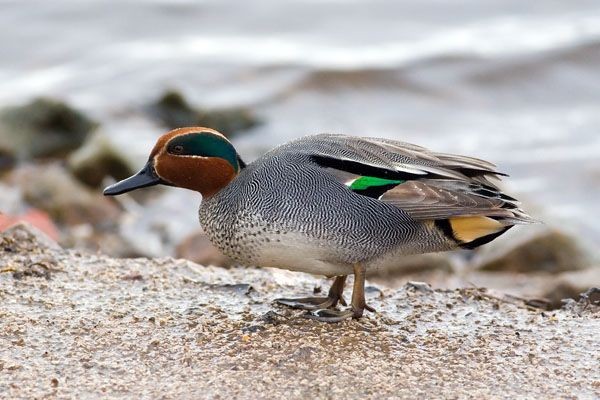 Eurasian Teal: Martin Mere, Lancs A familiar sight, but how do you pick out its Nearctic counterpart? (photo: Damian Waters).

Throughout the twentieth century, that familiar dabbling duck of local wetlands, the humble Teal ('Common' Teal or Eurasian Teal as it is also known), comprised two (or three) forms. The nominate Anas crecca crecca (Eurasian Teal) was a well-known bird to most of us, whilst the Nearctic counterpart A. c. carolinensis (Green-winged Teal) was one of the commoner rarities on this side of the Atlantic. The population on the Aleutian Islands have been described as a separate subspecies A. c. nimia, though it has been suggested that the basis for recognising nimia as a separate taxon are weak.

Recently, there has been a change in the taxonomic position, with Green-winged Teal treated as a distinct species by most authorities based on behavioural, morphological, and molecular evidence; this was also the view adopted by the British Ornithologist's Union (BOURC) in their 27th report in October 2000.

The fact that Green-winged Teal is a species in its own right appears to have been a bit slow to filter down in the current taxonomic whirlpool. Hopefully this short article will increase awareness of the fact and draw attention to what to look for when looking for the distinctive drakes of this species - at present the identification of females with confidence is considered to be extremely difficult!

Green-winged Teal breeds throughout most of North America and can be found in winter as far south as Central America and the West Indies. In Britain the first record was a bird obtained at Hurstbourne Park, Hampshire, in 1840 or thereabouts. Prior to 1958 there were around a dozen records, but between then and 2003 over 600 were recorded, including 54 in 2002 and 48 in 1999. Formerly considered to be a 'rarity', the BBRC ceased adjudicating records in 1990 (following an average of 12 birds per year in the 1980s). This would appear to have been a sensible decision as there were an average of 23 per year in the 1990s, and an average of 41 per year between 2000 and 2003! There have been three recoveries of Canadian-ringed Green-winged Teals in Britain and Ireland, of birds ringed in New Brunswick, Newfoundland and Quebec.

The true status of the species on this side of the Atlantic is obscured by a couple of factors. Firstly, the virtual absence of females, which are presently considered exceptionally difficult to identify in the field. The exception to this was a female with a party of four Green-winged Teals on the Isles of Scilly from November 1999 to April 2000 - the first female to be 'identified' in Britain. Secondly, a number of individuals maintain site fidelity from year to year, returning to favoured locations. For example, a drake was on the Hayle Estuary (Cornwall) in seven successive winters and there are many instances elsewhere of (presumably the same) drakes returning to the same sites in subsequent years. 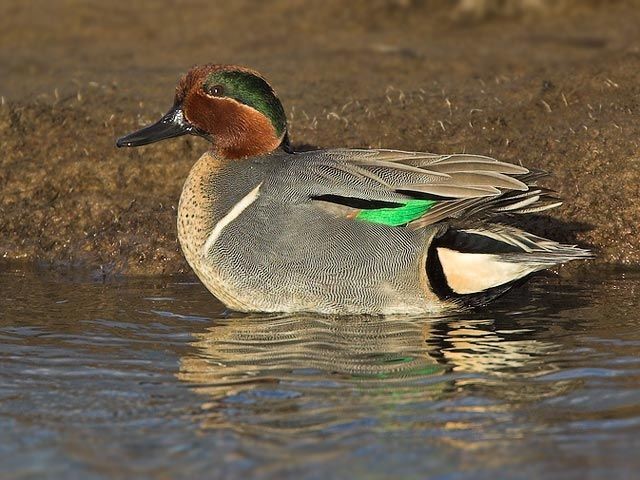 Green-winged Teal: Marshside, Lancs Compared with drake Eurasian Teal, note the restricted border to the green head stripe (it is virtually lacking above the head stripe - in all the head pattern is less striking); also the prominent white bar at the front of the flanks differs markedly from the horizontal bar on Eurasian Teal (photo: Steve Round). 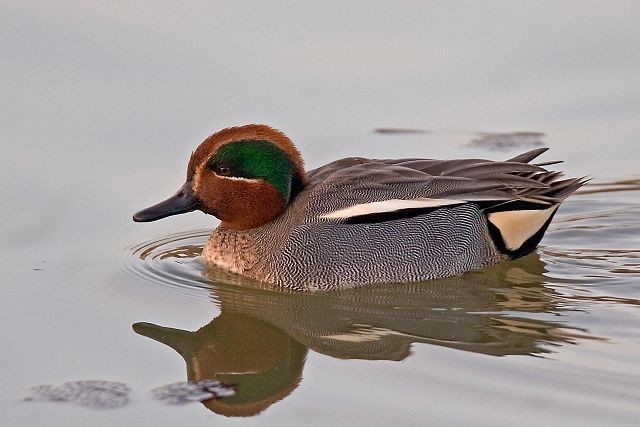 Eurasian Teal: Lackford Lakes, Suffolk Note the prominent borders above and below the green head stripe, the obvious horizontal white stripe above the flanks, and the coarse vermiculations on the back and flanks (photo: Garth Peacock).

At present only drakes can be identified with any certainty. It has been proposed that a number of features can be used for the identification of females and juveniles (such as the greater covert bar, head pattern, bill colour, the nature of the mottling on the breast and flanks and the depth of the white tips to the outer secondaries) but the value of this suite of characteristics in the subtle identification process has yet to be fully embraced and tested.

Picking out the distinctive drakes from a flock of Eurasian Teal is quite a straightforward process once you know what to look for. As your telescope scans through the shuffling flock your eyes take in large numbers of horizontal white stripes above the flanks, before bingo, you come across a bird on which this is missing. Something will appear 'different', but what? Then the penny drops and you will notice that there is a distinctive vertical white bar at the front of the flanks instead - you are now, almost certainly, watching a Green-winged Teal!

Once this prominent feature has been noted and you start to look in greater detail there are a number of other subtle features which can be observed as you pan between the drake Green-winged Teal and the closest drake Eurasian Teal. The one potential 'spoiler' is a hybrid bird, a number of which have been reported over the years. Such birds show mixed characters, so although you can see a vertical stripe on the bird in front of you then make sure there's not a horizontal one as well! However, to clinch a Green-winged Teal: 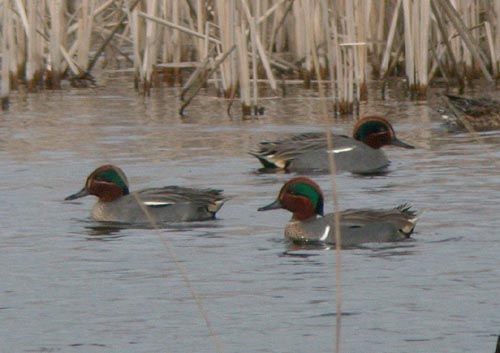 Green-winged Teal: Woodwalton Fen, Cambs Although basically similar in plumage to Eurasian Teal, the differences are quite obvious. The drake Green-winged Teal has a more subtle head pattern and has a vertical, rather than horizontal, white stripe to look for (photo: Katie Fuller). 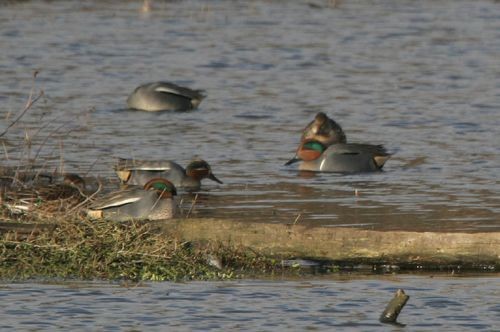 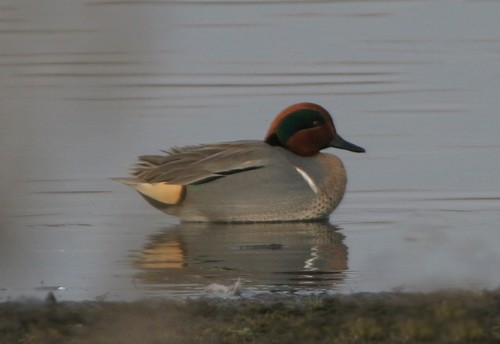 Green-winged Teal: Shibdon Pond, Durham The fine vermiculations are apparent on the flanks and upperparts, compared with the well-marked drake Eurasian Teal, and the warmer breast colour is obvious too (photo: Steven Fryer).

A number of sites regularly host this attractive duck and, as always, subscribers should use the Bird News Extra search facility to find out about the latest locations at which birds are present.

Alternatively you can try to find your own. Wherever numbers of Eurasian Teal gather, there is the possibility of a 'self-find' by slowly sifting through the group looking for the tell-tale signs of a vagrant bird. You don't always need huge numbers of the abundant 'carrier species' to look through either; indeed it could be argued that large flocks make finding a vagrant harder! Anywhere that attracts Eurasian Teal offers hope to finders, as birds do turn up on small sites as well as large ones. Spring perhaps offers increased chances too, as numbers of Eurasian Teal decrease, making flock sifting an easier process. 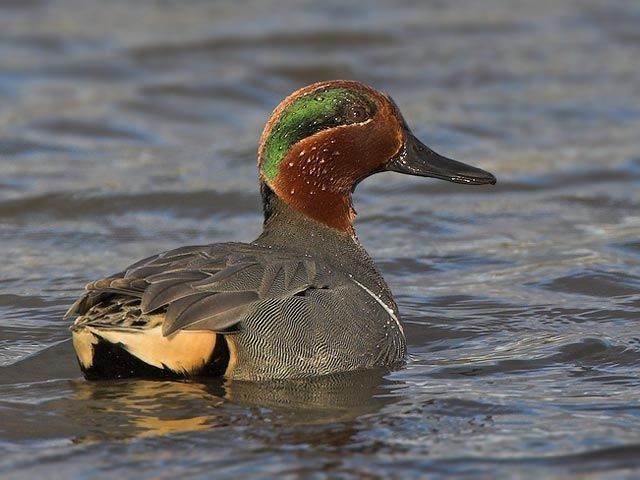 This is an updated version of an article that first appeared on Bird News Extra in 2001 .