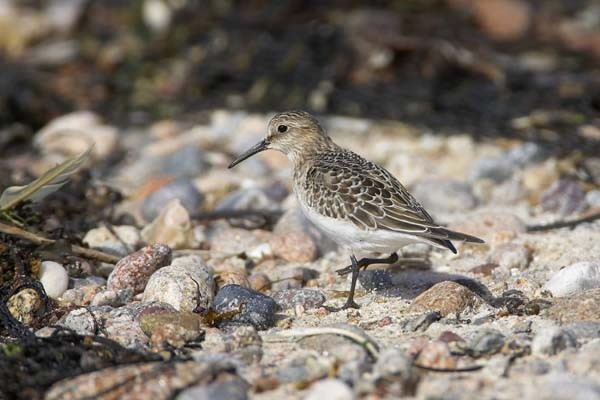 Baird's Sandpiper: Juvenile, Scilly, September. A classic juvenile, in a classic southwestern setting. A rather nondescript species in many respects, the 'scalloped' upperparts makes it stand out from its congeners. Note the attenuated body and long primaries - three visible primaries extend beyond the tail making an obvious scissor-shape. The primary extension equates to the tertial length (photo: Chris Brogdale).

Autumn is an exciting time for wader-watchers. Carefully sifting through flocks of commoner species, a number of scarce options are on offer for would-be 'self-finders', especially after an Atlantic depression has passed through. One of the more frequently encountered of the rare 'peeps' in Britain and Ireland is the Baird's Sandpiper. With 185 British records by the end of 2004 and in the region of 90 Irish records, this subtle stint is surprisingly regular on this side of the Atlantic considering its relative scarcity along the eastern states of North America.

Baird's Sandpiper was one of the last sandpipers to be described in North America. The breeding range is restricted to the high Arctic of North America, northwest Greenland and northeast Siberia. Its journey to wintering grounds in South America, from the Andes of Ecuador to the lowlands of Tierra del Fuego, is one of the longest of all bird species and one that is undertaken rapidly. Some birds undertake the journey to the southern tip of South America in as little as five weeks. 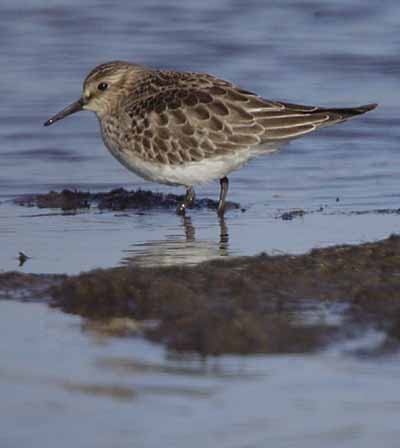 Baird's Sandpiper: Juvenile, Hampshire, September. Note the broad flat back. The bill is all black, and the head bland, with a diffuse supercilium and pale supraloral spot (photo: Tony Mills).

In the autumn adults leave the breeding grounds for staging areas in the prairies from late July to August, migrating through central North America. From their staging areas they then take a route over the eastern Pacific to the wintering grounds, bypassing Central America. The migration of juveniles is a less urgent affair, taking place on a broader front, with small numbers following the Atlantic coast. It seems that many of the birds reaching us in Northwest Europe originate from birds displaced from this migration route by rapid Atlantic depressions.

Sightings here are annual, with numbers plentiful in some years, and low double-figure annual totals achieved several times since the late 1980s. Favoured areas include southwest Britain and southern Ireland, though relatively few counties are yet to record the species at least once. The overwhelming majority of birds have been September juveniles, and records outside the late-August-to-early-October period are quite rare. Spring and summer records are unusual, and a wintering 1st-winter at Staines Reservoirs (Surrey) from 14th October 1982 to 24th April 1983 was quite exceptional.

Your typical Baird's lies between Little Stint and Dunlin in size. The long wings, essential for their mammoth migration, give them an attenuated appearance, shared only with White-rumped Sandpiper. On the face of it, this 'species pair' should not present much of an identification conundrum. With good views, or images, these two should be easily separated, especially if the 'rump' of the latter is revealed. However, separation of the two can sometimes be problematical, especially with distant views. If you are lucky enough to find yourself in the position of having to separate one, or the other, of these two species then do not become complacent under less-than-ideal viewing conditions.

The long-bodied and flat-backed profile of Baird's can be exaggerated further by its apparent 'short-legged' appearance, though at times this can be deceiving as Baird's can also appear quite 'leggy'. In all plumages the bill has a thinner base, and is straighter than White-rumped. The bill is also all-dark, lacking the pale base of White-rumped. The call differs too, being a rolled, or trilled, pair-r-r-reet or krreep. 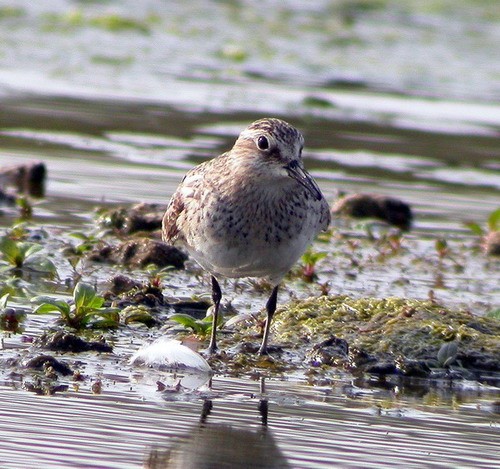 Baird's Sandpiper: Adult, Lincolnshire, September. The streaked breast band recalls a small Pectoral Sandpiper, but is not clearly demarcated as in that species (photo: Dean Eades).