The Sierra de Guara is a range of mountains just south of the Ordesa National Park in Spain. The peaks reach up to 2000 metres and are dissected by rivers which form a number of deep gorges. This makes the area perfect for Wallcreepers which migrate down from the highest Pyrennean peaks to spend the winter on vertical cliffs at lower altitudes. These wintering birds can be seen from early November to early April. On a visit here at the end of November, I saw Wallcreepers at four sites in three days. Here's a list of sites that are all worth checking; it is by no means exhaustive as there are so many other cliff faces in the area. 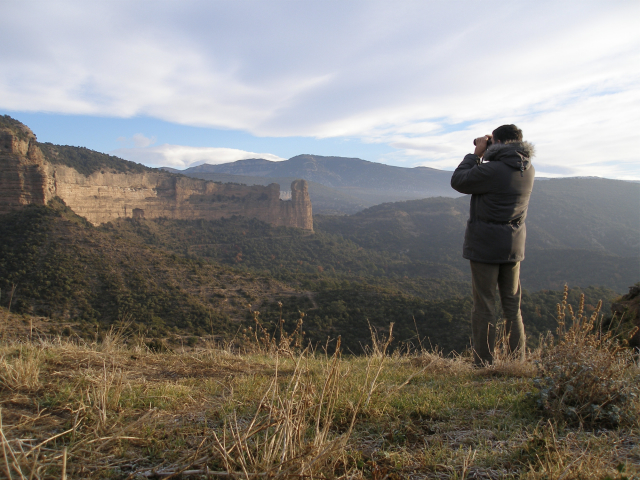 El Huevo de Morrano, one of several sites in this area where Wallcreepers winter. You don't have to view them from this distance! There's a path beneath the cliff. The one we saw was on the rock at the left-hand end of the photo (photo: Liz Hall).

This is an impressive cliff-face that you will see on your right as you drive north from Bierge to the next village of Morrano. Just after the second turn off to Morrano look for a track to the right, where a yellow sign says "Espacio Natural Protegido" and a white sign says "Coto Deportivo de Casa". Park there and walk for about 10 minutes until you are beneath the cliff. It's then worth sitting and scanning at intervals and walking the full length of the cliff if necessary (the Wallcreepers are sometimes seen 'behind' the phallic pinnacle at the end). The bird we saw was found on the bit of cliff nearest the road, before it flew across the front of the cliff and alighted in the middle of the face. Other birds here included Blue Rock Thrush, Black Redstart, Alpine Accentor, Crag Martin, Cirl Bunting, Firecrest, Dartford Warbler and Sardinian Warbler. 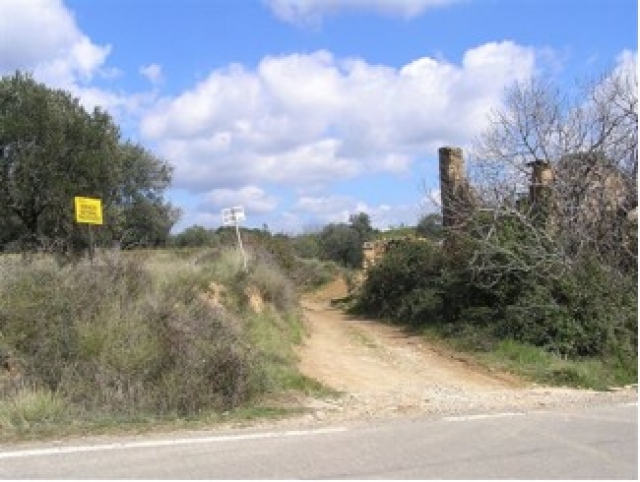 This is where the Calcon Valley has been dammed to create a reservoir. By driving north from near Aguas you reach a track signposted to Embalse de Guara. Park at the barrier and walk to the dam. Wallcreepers are often seen in the gorge below the dam but ours was on the cliff face on the east side of the reservoir. It flew over us and whistled (the only Wallcreeper I've ever heard) before alighting on the cliff above the track we'd just walked down. We also had great views of Peregrine here and Griffon Vultures nest on the east side of the cliff. 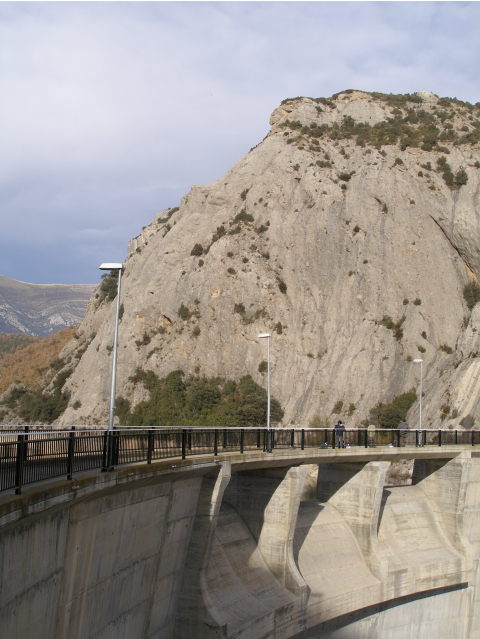 Embalse de Calcon The Wallcreepers are often seen below the dam but ours was on the cliff beyond (photo: Liz Hall).

This is said to be a reliable site but we were unable to spend long enough here to do it justice. The road across the dam is for authorised vehicles only so you have to park nearby, at a car park signed as "Parking de la C.H.E. (Confederación Hidrográfica del Ebro)" and walk to the dam. Birds are apparently seen on the dam itself or on the cliffs of the gorge below the dam. If you fail here, return to the car and drive as far north as you can along the west side of the reservoir. After only a kilometre or so, the road is blocked but you can park on the left and scan the gullies and pinnacles above you. Up to three Wallcreepers at a time have been seen here. Lammergeier was the best bird we saw in this area but we had Golden Eagle too. 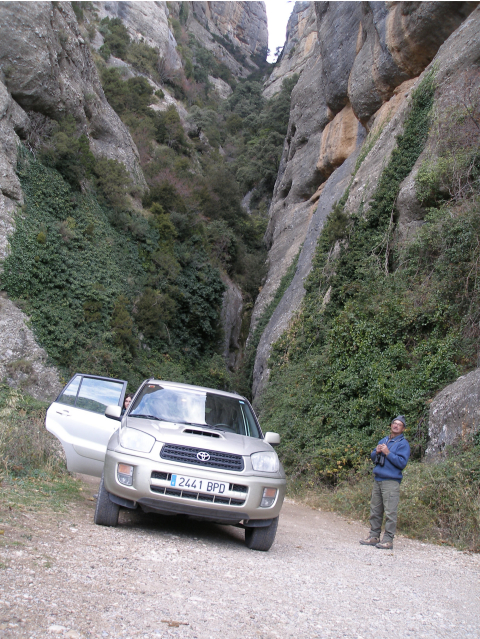 The parking spot at the end of the road past Vadiello dam. Park here and scan upwards (photo: Liz Hall).

Rodellar is the climbing capital of northern Spain with an almost unlimited number of cliff faces for both climbers and Wallcreepers. Park in Rodellar, walk north through the village then follow paths down into the gorges (signposted to "Surgencia de Mascún" or to "Otín"). One cliff face has a distinctive hole which is shaped like a dolphin - the gorges on either side of this cliff are worth checking unless they are crowded with climbers. We missed out here but continued up the valley towards Otin. There is a sign in Spanish saying 'climbing is prohibited beyond here from 1st December to 30th June' (to prevent disturbance to Lammergeiers). We scanned from here and didn't see Lammergeier but had good views of Golden Eagle and a brief and distant view of a Wallcreeper high on one of the cliffs to the west. Citril Finch are sometimes seen in winter in the bottom of the gorge. 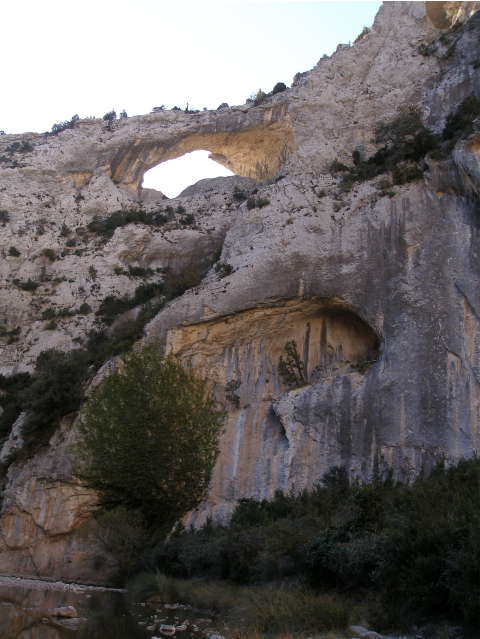 Canyon de Mascun The 'dolphin-shaped' hole is a useful landmark. The Wallcreeper we saw was further up the gorge than this (photo: Liz Hall).

The picture-postcard mediaeval town of Alquezar is the biggest tourist attraction in the Sierra de Guara. The centre-piece of the town is the 'Colegiata', a church which looks more like a steep-walled castle perched on a pinnacle of rock. 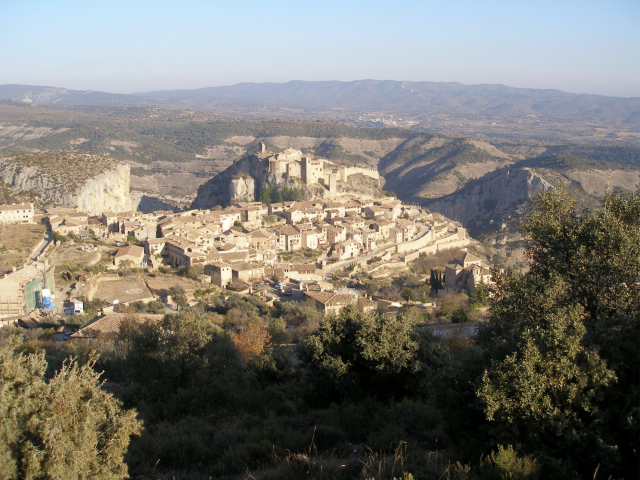 Alquezar village The walls and cliffs beyond the village are best for Wallcreepers (photo: Liz Hall).

Drive to one of the car parks above the town then walk through the streets until you reach the Calle la Tallada, where a pedestrianised promenade overlooks the valley to the north of town, with the Colegiata on the right and another cliff face on the left. Wallcreepers are sometimes seen on the walls of the Colegiata or on the rocks below, or even on other buildings in the village, but the one we saw was on the cliff face to the left. There are lots of Red-billed Chough here and the distant canyons to the west have Lammergeier and literally hundreds of Griffon Vultures. 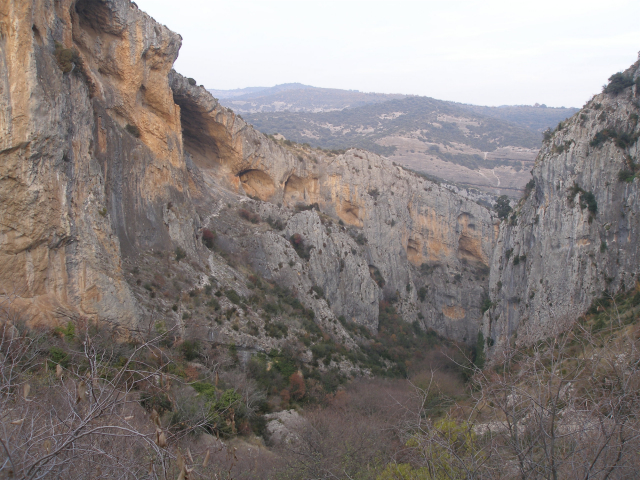 The view from Alquezar village The Wallcreeper we saw was on the left-hand cliff face (photo: Liz Hall).

I'd like to thank Nuria Grasa Sancho and Paco Bescos Claver for their help during my stay in this area and for providing information about what we didn't manage to see ourselves during the short visit. 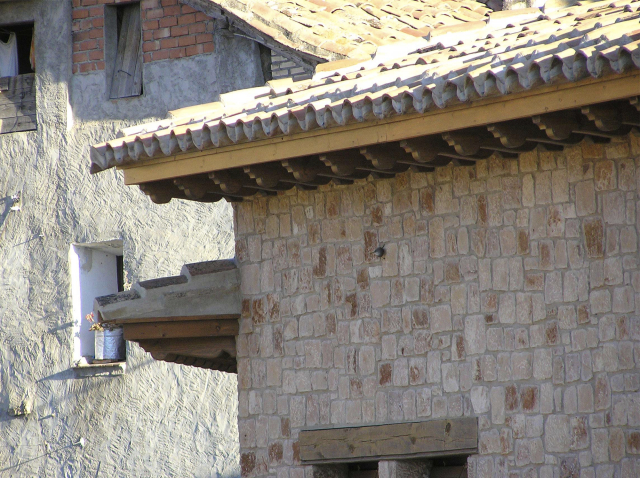 Wallcreeper, Alquezar, Aragon A few days after our visit, one of the guides, Nuria, emailed to say 'This morning , by the time I opened the balcony there was a Wallcreeper that flew away to the house in front of mine - I enclose my bad photo'. Not bad for a back garden bird (photo: Nuria Grasa Sancho).