A few months ago I put an appeal in the BirdGuides newsletter, asking for advice on where to look for Atlas Flycatchers from anyone who had seen them. Despite the fact that our newsletter goes to thousands of birdwatchers, I didn't get a single reply from someone who knew where to look. What? Has no-one seen these birds? I consulted the excellent 'Birdwatchers Guide to Morocco' and the monumental 'Birds in Morocco' and both publications said the flycatchers can be found in mature oak and cedar forest in the Azrou/Ifrane area from late April onwards. However, I noticed that BirdQuest regularly visit this area in late April but don't mention the flycatchers in their blurb or in a trip report I found from one of these holidays. Indeed, although I looked through several trip reports, I still couldn't find any that reported seeing them. I contacted Patrick Bergier, co-author of both the books I'd consulted and he very helpfully came back with a prompt reply saying

'You will probably find only a few birds at their breeding sites in the Middle Atlas in late April. It would be better to get there mid-May....'

I therefore delayed my trip to Morocco by a week so that I would be in the Ifrane area in early May, rather than late April, still a little nervous that I might have to leave before the flycatchers arrived.

I arrived at Azrou on 2nd May and immediately spent my first evening exploring the 'Foret des Cedres' above Azrou as it seemed to me that that must be no finer area for 'mature cedars and oaks'. The forests there are magnificent but populated mostly by (African?) Chaffinch, (African?) Blue Tit, Coal Tit, Nuthatch, Short-toed Treecreeper and Firecrest. It was exciting to come across a troop of Barbary Apes but disappointing not to even hear a flycatcher. Was I too early? Would I miss them?

The following day I set off to film the Levaillant's Woodpeckers around Dayet Aoua, near Ifrane. The poplars on the south shore of the lake were in blossom and seemed to have been invaded by spectacular numbers of hawfinches (of the Moroccan race). It was while filming these that I heard what sounded like a flycatcher singing. It lacked the jauntiness and gusto of a Pied Flycatcher but was otherwise similar. Sure enough, it led me to a male Atlas Flycatcher, singing almost constantly and, at one point, hopping in and out of a potential nest-hole in one of the roadside poplars. Eureka! There was no doubt about its identity as Atlas Flycatcher. I'd earlier seen and filmed Pied Flycatchers both at the Auberge Derkaoua and, as late as 2nd May, near Sidi Yahya des Zaers but this bird showed significantly more white in its plumage, most notably a massive white 'block' on the greater coverts, a larger white forehead, a white rump and a larger patch of white at the base of the primaries. 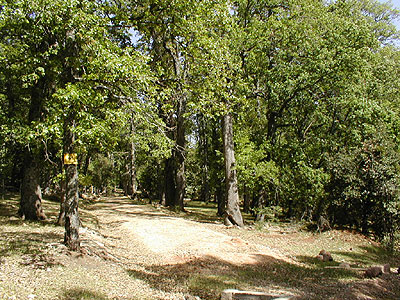 A good area for Atlas Flycatcher: the oakwood between Azrou and Ifrane. Note the bright pale leaves. 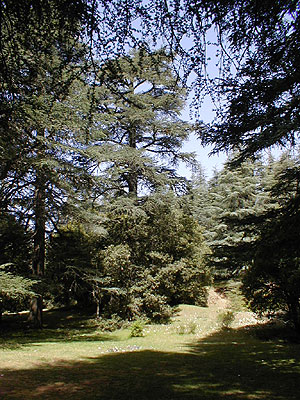 Not such a good area: the cedar forest on the 'route des cedres'. The leaves are too dark!

Having successfully obtained close-up footage and sound recordings of this bird, the pressure was off regarding finding others but I did spend some time at other wooded sites in that area and can report the following:

The mature cedars beside the 'route des cedres' above Azrou are not recommended as a place to look. I made two more lengthy visits there (filming the Moroccan races of Coal Tit, Nuthatch and Firecrest) and didn't hear a single flycatcher, though I did briefly see and film a female flycatcher high in an oak-tree. It seemed to me that the best areas were those where the dominant tree was an oak tree with bright lime-green leaves (most of the broad-leaved trees amongst the big cedars had dull, dark green leaves). I did hear a flycatcher by stopping by the road on the way back down to Azrou (on the east side of the road, near the km post that says 'Meknes 72'). However, this road is so busy with trucks trundling noisily up the steep hill that this is a dreadful place to listen for birdsong. Instead I would recommend the following two sites:

Meanwhile, I should add that the bird I found at Dayet Aoua was still there, singing and giving great views, the following day. It doesn't seem like ideal habitat here but, if it's occupied every year, this is a much nicer place to watch them than by a main road – and you'll probably want to go here anyway to see the easy Levaillant's Woodpecker and the dozens of Red-knobbed Coot. The exact spot was just beyond the spot where there are pedaloes for hire.