The daily temperature averaged around 20°C for the whole of November, but today it's started to drop. It's time to dig out the fleece for a day of birding, and have the fire ready for lighting on return to offset the chilly evenings. One bonus of being in Spain is that it doesn't get dark until 6.30 pm. It will stay much like that until the nights start getting noticeably shorter around February, so no dreary dark days of putting the lights on at 3.30pm like in the UK. 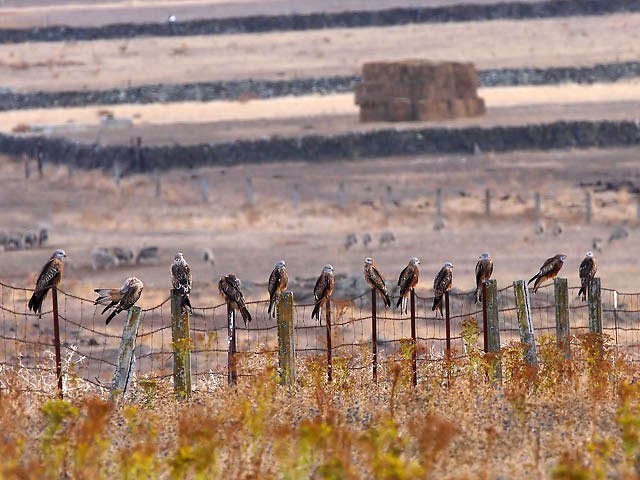 Not much has changed from October; there's a little more rain in the night perhaps, making the whole area very green now: a contrast to the straw colours of the searing summer, bringing fresh grazing to all the animals. Most of the small pools are now full, providing bathing and drinking places for wildlife. However, due to the number available, finding a regular spot for birds is a little trickier. The biggest surprise has been the number of late migrants, if in fact they are migrants and not late-stayers possibly here for the whole of winter.

Mid-month I was driving back home down the track from my drinking pool, after watching a very rare visitor here, a splendid male Bullfinch, when I spotted a Nightjar on the track. As it was quite dark already it was a struggle to get a decent photo in the car headlights. I didn't really have time to mess around with camera settings as I thought it might fly off; I only managed around 10 frames, handheld at 1/4 of a second. When I looked at them on the computer, only one was even close to being sharp. To my surprise, though, it was not a Red-necked (I thought it might have been as they don't usually leave until October), but a European Nightjar, easily told by the grey nape and large white wing bar. I have heard them in spring as they fly over the house on their northerly migration, but this is the first I have actually seen here.

More reported surprises mid-month were an adult Woodchat Shrike flying over the track then perching on the fence giving very close views, and a group of 15 Dotterel drinking at a small pool. 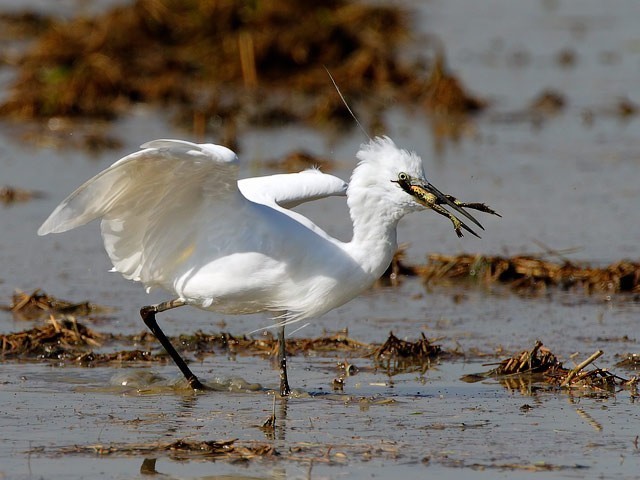 Waders are still hard to come by in the wetlands; the weather in the north must still be too good for them to make the journey here. However, a flock of 500+ Little Stint was amazing: I have only seen flocks or around 200 birds before. They were accompanied by only a few Dunlin, including long and short-billed races, and eight Curlew Sandpipers, lacking any trace of summer colouration. A trip to the rice fields with a couple of guests resulted in 76 species for the day, not too bad a total as it is a very specialised location. There are only flat wet fields to search, but it was nice to be able to show them a pair of Black-shouldered Kites, three types of egret feeding on frogs and mice in a field being harvested, 15 Kentish Plover in among a few Dunlin and Little Ringed Plover, and a solitary male Hen Harrier hunting low. We also saw a Dartford Warbler catching small spiders on broom, Bluethroats, two pairs of Red-crested Pochard and lots of Waxbills and Avadavats in full breeding plumage. The Black-shouldered Kites were seen mating just a few days later, then participating in their pair-bonding flight dance. 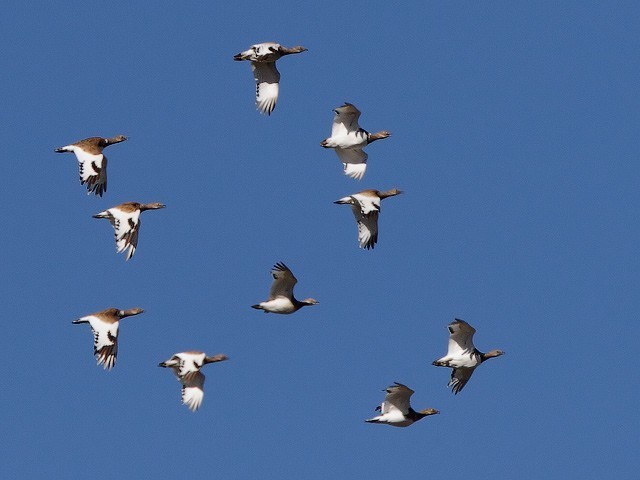 A quick search along the Belen plain on the way home produced a dozen Great Bustards from a tip-off after bumping into Martin Kelsey on the road, but he had seen no Little Bustards. Luckily, only a few hundred metres to the left of the Great Bustards, I managed to spot, at about a 2 km range, and in gathering gloom, what at first I thought were Golden Plovers fighting. They turned out to be well over 100 Little Bustards, the males of which appeared to be starting their mating dance, jumping in the air and flapping their wings.

The following day I happened to bump into my guests again on the steppe. They were searching for sandgrouse with no luck, and intensive searches in the most likely places produced neither grouse nor bustards, so they left to look round the beautiful medieval town of Trujillo for the afternoon. It's obvious what happened next: 100 metres from where they turned off were a huge flock of Pin-tailed Sandgrouse, a few Black-bellied, very close views of 32 Great Bustards, two adult Bonelli's Eagles sitting on a nearby pylon and, to top it off, two adult Spanish Imperial Eagles flew very low, circling each other and calling continuously! 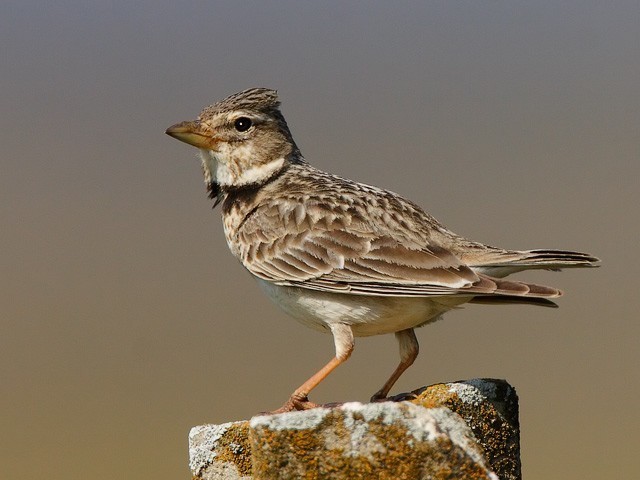 Another visit to the Belen plains was fairly quiet: 20 distant Great Bustards were all I could muster, until I reached the far end, where there were easily 150 Griffons and 10 Black Vultures. Most were circling en masse, but a few were picking over the scant remains of a sheep, fighting over the few remaining morsels. Returning the way I came, in a newly ploughed field was a huge flock of small birds, alighting then circling as though being disturbed. I could not see any culprits causing this, except for a Common Kestrel sitting on a distant post, so I decided to stop and have a good scan of the field to see what they were. The flock turned out to be hundreds of Calandra Lark, Skylark, Crested Lark and quite a few Woodlarks, with accompanying Goldfinches and sparrows. Without seeing the birds flying around the field, you would swear there was nothing in there at all, everything blending in perfectly to the colour and texture of the dry stony surface, until the scope comes out, revealing 7–800 birds scurrying round.

Most fairly undisturbed roads have their share of raptors sitting on the roadside fence posts, and all have a built-in radar gun, or at least it seems that way. If you maintain a constant speed of around 30km/hour, they will just sit there and look at you as you go past, but if you are slower than that, or turn the engine off and coast, they are up and away quickly, causing great frustration, as the photos would be brilliant. Returning along the road back to Belen, I caught sight of a Buzzard (a common winter visitor here) on the ground only a few metres into the field, so I slowed down, hoping to catch a shot, as it was more than likely there with recently caught prey. As I stopped, it became apparent that it was injured. It jumped further away, its wings flapping to no avail; the left one was clearly broken around where the primary feathers begin. I jumped over the fence, thinking I could catch it and take it to the recuperation centre, but no matter how I tried, it was an impossible task. Sadly I had to leave it to the mercy of the predators that would soon make a meal of it in the gathering darkness. 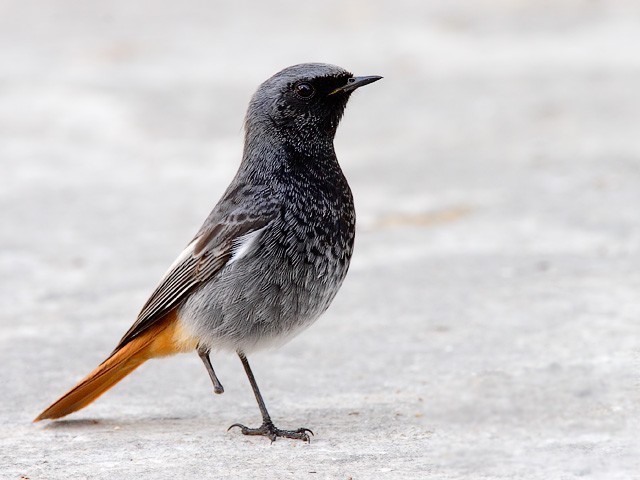 I live on the very northern edge of the village and have an old olive tree just outside my front door. It's a haven for birds in autumn and winter, as the tree is not disturbed and the olives are not harvested, and the birds have a good escape route into the country if spooked by anything. As the olives ripen, they fall onto the path, and two pairs of Black Redstarts appear every day to feed on the ripened fruit. One of the males only has one foot, but it doesn't seem to bother him. A pair of Sardinian Warblers like to think they are in charge of this particular tree, and are very vocal when intruders appear. Most visitors ignore them, as they are tiny little birds, all talk and no action. 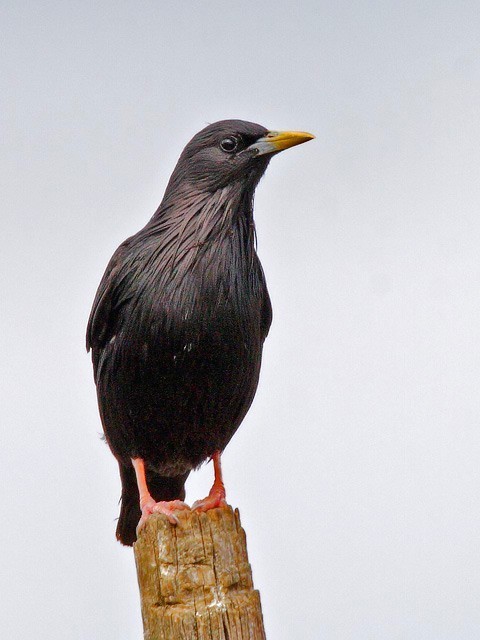 Up to four Robins and four Dunnocks have also been regulars; the Robins seemingly tolerate each other, unlike in the breeding season when there would be mayhem. Other regulars are a pair of Stonechats, two male Blackcaps, Chiffchaffs and countless House Sparrows, each of which has to be inspected carefully as there are sometimes Rock Sparrow in with them. The wintering Blue Rock Thrushes don't seem to come down for the olives, preferring to sit on the roof watching the comings and goings along with the Hoopoes and Spotless Starlings. One day I was watching the activity from the front doorstep, when everything suddenly went very quiet, the birds scattering quickly. A few seconds later, a female Sparrowhawk came hurtling up the street, did a fast 180 overwing, and went back the way she went, having caught nothing.

A quick visit to a new site I have been meaning to look at for ages proved very fruitful, with lots of future potential. I will be keeping a close eye on developments there. It has some wonderful old trees on the edge of the water, on which a pair of Kingfishers were sitting, making their swift dives into the shallow water, coming up with a small fish every time they tried. They were watched by a splendid male Redstart, plenty of Snipe, Great Crested Grebes, and Grey Wagtails. 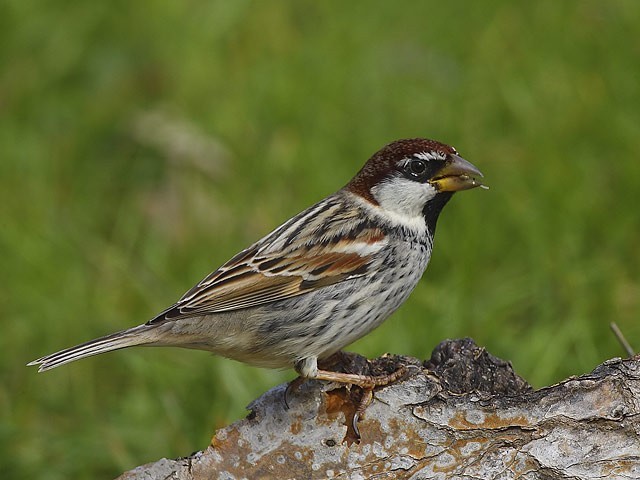 I stopped on the track home to watch a lamb being born in a nearby field, the mother having isolated herself from the flock to give birth in peace. Lambs are born all-year-round here, and are not restricted to springtime due to the mellow climate. The only problem they face is if they are too small and it happens to rain, the wet combining with cold to have a devastating effect on the tiny creatures. Watching the birth with great interest was a leucistic Song Thrush, its brilliant white head standing out from the bare earth of the sheep field, although still too far for a decent photo, but the huge flock of Spanish Sparrows feeding on left-over grain were disinterested in the goings on, preferring to squabble over the food instead.