Recently published research has described a new species of frigatebird in the South Atlantic, which may well prove to be the world's rarest seabird – and one that faces the imminent threat of extinction.

The newly described frigatebird is considered to be one of the rarest (if not the rarest) seabird species in the world. Found only around the South Atlantic island of Trindade, some 680 miles  east of mainland Brazil, it no longer breeds on the main island and is only known to nest on a small rocky islet off the southern coast. The total population may consist of fewer than 20 breeding pairs and is considered Critically Endangered. Intensive observations by three researchers on the island from February-April 2013 suggested the situation may be even more dire, with just six different individuals (two males, two females and two juveniles) recorded during the two months (Port et al, 2016). 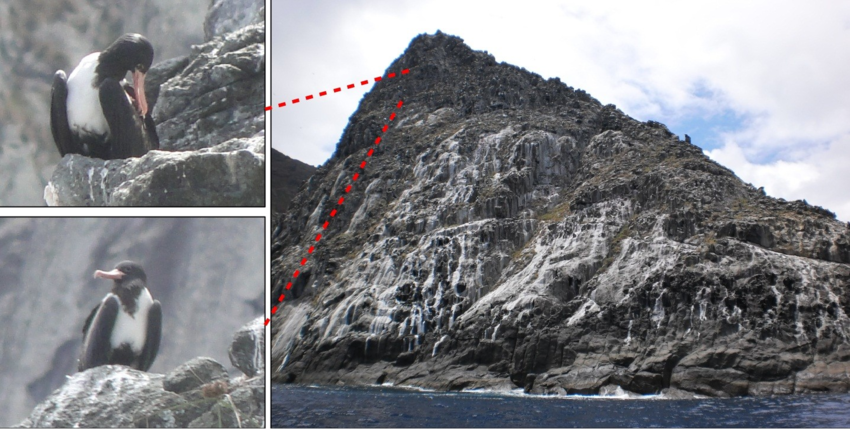 Two fermale Atlantic Lesser Frigatebirds perched on the western face of a rocky promontory in the extreme south of Trindade Island in 2013 (Dagoberto Port et al).

As with many other endangered seabirds worldwide, the decline of Atlantic Lesser Frigatebird appears to stem from human interference. For example, the introduction of predators such as cats and livestock, particularly goats, which destroyed the trees used as nest sites by the frigatebirds. Fossils have established that it once also occurred on St Helena, 1,550 miles to the east of Trindade, although the species is long extinct there. Suitable trees began to disappear from Trindade in the early 19th century, probably because of a lack of forest regeneration due to unsustainable grazing.

Storrs Olson, author of the paper, explained: "Frigatebirds were still nesting on the remains of trees on the main island of Trindade in 1916 and 1925 but appear to have been gone by 1950; they were certainly absent by my visit in 1975-76. At that time, the only breeding frigatebirds were probably fewer than 20 pairs of Fregata trinitatis on a small islet off the southern point of the island, where they nested on the ground. Ground nesting would probably not be feasible for frigatebirds on the main island of Trindade because of the large numbers of voracious, omnivorous land crabs."

A shooting campaign by the Brazilian Navy appears to have resulted in the elimination of cats from Trindade by 1994. Eradication of goats, which were still present on Trindade in good numbers into the early 21st century, became a high priority. Again, the Brazilian military sent in teams of marine snipers, which eliminated the last of the goats by 2005, with nearly immediate recovery of some components of the native vegetation. The next step is to erect artificial breeding and roosting perches in suitable areas. Conservationists are close to being awarded a grant of 400,000 Reais Brasileiros (approximately £9,150) to fund this project.

Olson concluded: "The unfortunate problem is that Atlantic Lesser Frigatebird now remains on Trindade in extremely small numbers and is in imminent danger of extinction. Successful removal of all introduced mammals from Trindade, save House Mice, may have improved the chances of survival of frigatebirds on the island, but whether populations can recover from such low numbers remains to be seen."