If there's been a standout highlight of my lockdown birding, it's the frequent encounters with raptors. They have been in evidence every day, both at home and during exercise walks nearby. In fact, since lockdown began on 23 March, no fewer than seven species have appeared within a short distance of my home in urban north London.

Such a total would have been unthinkable even 10 years ago, but now birds of prey are unavoidable: hovering Common Kestrels, hunting Eurasian Sparrowhawks, soaring Red Kites, often multiple Common Buzzards migrating north in a day. Eurasian Hobby and Western Marsh Harrier are rarer, with single sightings of each, but it is actually the most frequent species of all, Peregrine Falcon, that is the biggest surprise.

A pair has been in residence close to where I live – close enough to appear directly over the house on occasion, and for me to be able to tell them apart by their individual markings. Most days I see the birds several times, usually sitting high on favoured perches but occasionally returning to base carrying prey. They are the direct result of a battle hard won over many years, succeeding against the twin challenges of pesticides and persecution. The species' resilience and protected status have allowed it to reoccupy old haunts and colonise new sites.

But despite this, Peregrine cannot be described as common. Natural England quotes a 2014 UK population size of just 856 pairs – to put that in context it is far smaller, for example, than breeding population estimates for Willow Tit (3,400 pairs), Dartford Warbler (3,214 pairs) and Arctic Skua (2,136 pairs). Yet following an application from falconers seeking to establish a 'stud book' of British Peregrines, Natural England has in its very questionable wisdom granted licences for a small number of chicks to be removed legally from nests for captive breeding. 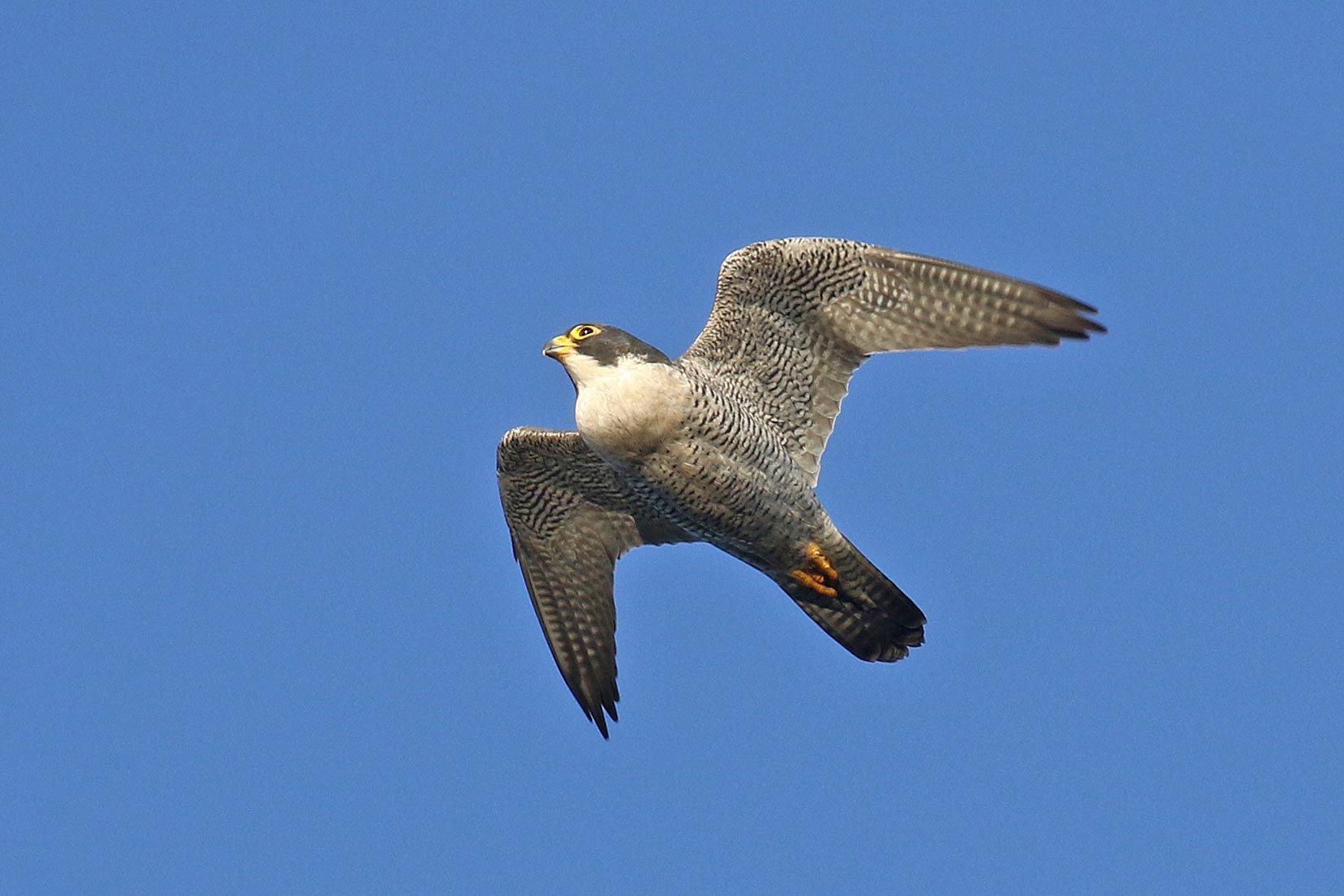 Legal protection for Peregrines has been eroded by licences to take chicks from nests and create a British ‘blood line’ for falconry purposes. The species is in fact more cosmopolitan than falconers suppose, as demonstrated by a female ringed as a chick in The Netherlands which is now holding territory in Britain (Dominic Mitchell).

It seems extraordinary that the government's adviser for the natural environment should facilitate this move. If it felt legally obliged to do so it might have used that as a defence, but instead spurious 'cultural' reasons have been cited. In a statement justifying the licensing decision, under the heading 'Why do these birds need to be taken from the wild?' (as if that were a necessity), Natural England claims: "Falconry is an ancient tradition which has been practised in England for centuries." There's also a long tradition of keeping songbirds in cages and breeding them – does that mean the chicks of Cirl Buntings (1,079 breeding pairs) should be taken from the wild? I'm only half joking, but of course it doesn't.

Falconers claim the move will be "providing British falconers with a native source of birds that would reconnect with their cultural heritage", whatever that means. I prefer the RSPB's statement on the matter: "The cultural value of these birds is that they are free, wild and available to all."

In other circumstances taking chicks from the nests of a protected species is a crime. Issuing a licence to do so in this instance may give permission in law but to many it won't change the perception of the act. No matter that it has minimal consequences for conservation (never mind minimal conservation value, contra the applicants' claim): it sends completely the wrong message, with the government body which says it is "helping to protect England's nature and landscapes" sanctioning a form of collecting for human exploitation.

It is a further blot on Natural England's record following its lame response to the conservation disaster that is HS2 and the high-speed destruction of hundreds of ancient woodlands, nature reserves and other wildlife sites. Britain's Peregrines and its countryside have been badly let down by the body that is supposed to help protect them.