During the UK lockdown I've taken to walking my old patch – the Rodwell Trail from my home in Weymouth to Ferrybridge, Dorset. The funny thing is that, in most springs, I'd drive past every morning on my day off to go to Portland Bill.

The morning of 6 May I'd gotten out of bed before sunrise, but was met with a pretty chilly north-east wind and thought better of it. A Tree Pipit flying over wasn't enough to drag me away from the warmth of bed!

Fast-forward a few hours and I'd eventually summoned up the enthusiasm to head out for a walk, arriving at Ferrybridge after an uneventful jaunt along the trail. I picked up a passerine arriving over Chesil Beach at height – to my surprise, it was a male Common Redstart. It continued north-east into the wind and out over Portland Harbour. It turned out that the car park at Ferrybridge was alive with common migrants: a Spotted Flycatcher was feeding voraciously from one of the Tamarisks before being joined by a second, dropping in from great height, several Willow Warblers fed in the cover of the bushes and Alexanders, and then a Whinchat arrived over the beach in the same manner as the earlier redstart. A further Spotted Flycatcher then zipped overhead, along with a Tree Pipit. Days like this aren't all that rare here, with one or two such events happening each spring.

I decided to cover the shoreline to the Little Tern colony and back as I've been dreaming of stumbling across a Black or White-winged Lark in the thrift field this spring! After about 150 m I turned back to see a few Common Swifts beginning to arrive and, as I did so, a silhouetted shape, instantly recognizable as a harrier, loomed up over the shingle bank, being so dark that I was perplexed as to its identity. 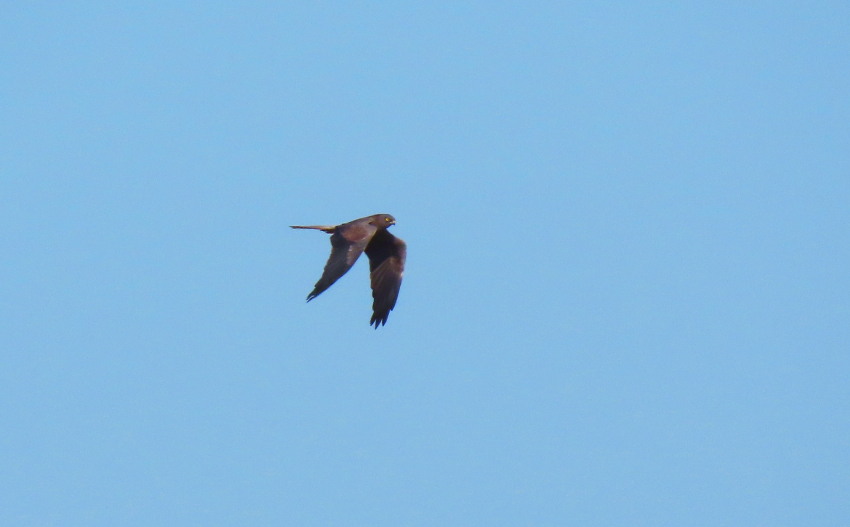 I initially put this down to the light, but made sure I obtained some record shots before looking again. Struck by its apparent small size, light, buoyant flight and dark colour it had to be a dark-morph Montagu's Harrier! This was a bird that I've wanted to see ever since I became aware of its existence, so I simultaneously tried to photograph, video and study the bird knowing this was a chance of a lifetime.

While the video is a little poor, the photographs are much more pleasing and the memories are perfect. As I made a few phone calls, I received a message about the bird being seen by a mate further along The Fleet. Unsure of his view, I sent him a back-of-camera shot and a message alerting him to the fact it was a dark morph. As was the case then my daily exercise time was well and truly up, so I headed home for a celebratory brew and breakfast. 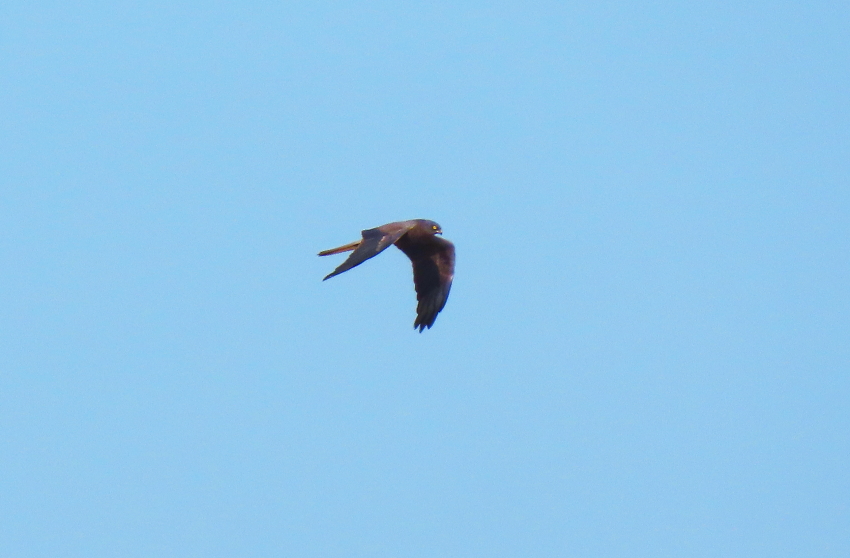 Dark-morph Montagu's Harriers are generally rare within the species' population, although are relatively frequent in the western part of the European range. Between 2% and 5% of all individuals passing at the Strait of Gibraltar tend to be dark, while studies have reported that as many as 10% of some Spanish populations involve dark-morph birds, with similar (even slightly higher) figures reported from parts of Portugal. However, further east they are far more infrequent, with just a handful seen among hundreds, if not thousands of migrating Montagu's Harriers in Israel.

Such dark birds have been occasionally recorded in Britain but, in line with a significant decline in both the British and western European populations of the species, sightings of such birds have become almost non-existent over the past couple of decades. 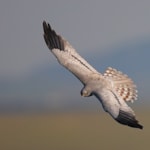