In 2007, Brazilian non-governmental organisation (NGO) Aquasis conducted museum research and exhaustive field expeditions on the historically reported distribution of Grey-breasted Parakeet in north-east Brazil. The search was instigated due to the alarming decline in the area of occurrences of the parakeet, caused mainly by habitat loss and the illegal traffic of wild-caught birds. At least 16 locations were considered to be possible refuges for the species, but only one population was found, in the humid upland forests of the Serra de Baturité in Ceará State.

As a consequence, Grey-breasted Parakeet was included in the IUCN Red List of Threatened Species as Critically Endangered and, from that year, Loro Parque Fundación has supported Aquasis's programme to save this species from extinction. The Zoological Society for the Conservation of Species and Populations (ZGAP) has also been an early supporter. 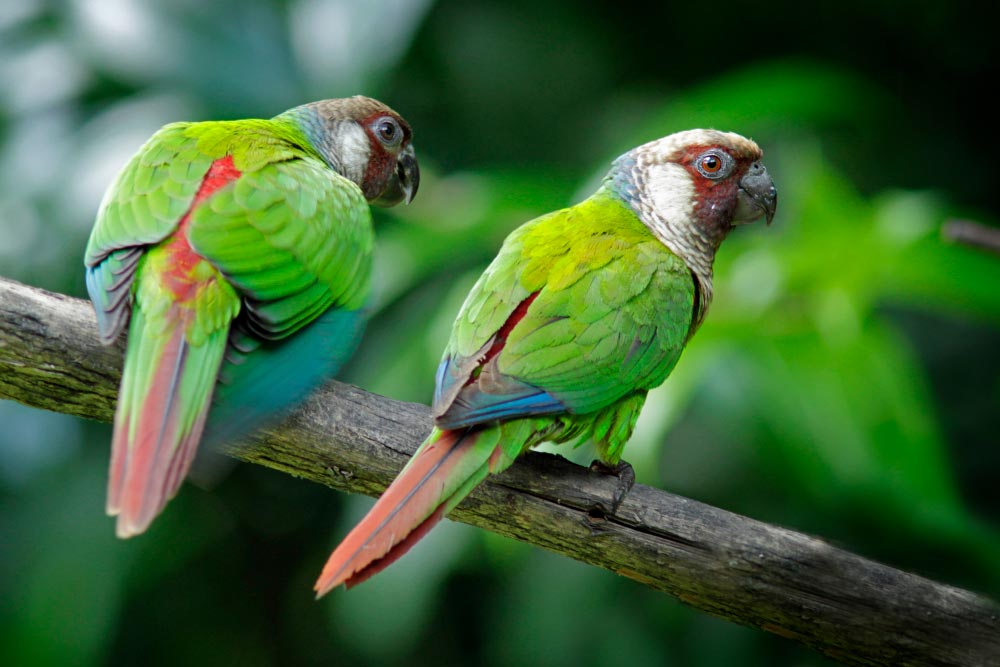 Over the intervening years, the project has registered notable successes. It discovered further limited populations in the upland areas of Serra do Mel in Quixadá and Serra Azul in Ibaretama, and very recently has added a fourth small population located in Serra do Parafuso, Canindé. All these more humid sites are in Ceará State and are surrounded by a radically dry lowland environment, called Caatinga, where the species is not found. Surveys by the Aquasis team confirm that 90% of all mature individuals are only found in the subpopulation of the Baturité Mountains, and the other three locations have relatively limited forest habitat. In these latter sites, Grey-breasted Parakeet appears to have adapted to these limitations by nesting on the rocky cliffs, whereas in the Baturité Mountains it is a tree-nesting species.

The main focus of the project is to protect and expand the population of parakeets in the Baturité Mountains, where it has created a field base and office. From here the Aquasis team can liaise with the local environment authority, and especially with landowners willing to create private reserves which Aquasis can help manage for the good of the parakeet. The project also raises awareness within the local populace about both the parakeet and the importance of the forests, and also organises presentations in local schools. Another notable milestone was the creation in 2018 of the Grey-breasted Parakeet Wildlife Refuge, an official protected area of 39 ha created by the Government of Ceará State with the objective of protecting a key breeding area of the species. The area in which the refuge is situated has an environmental police post. 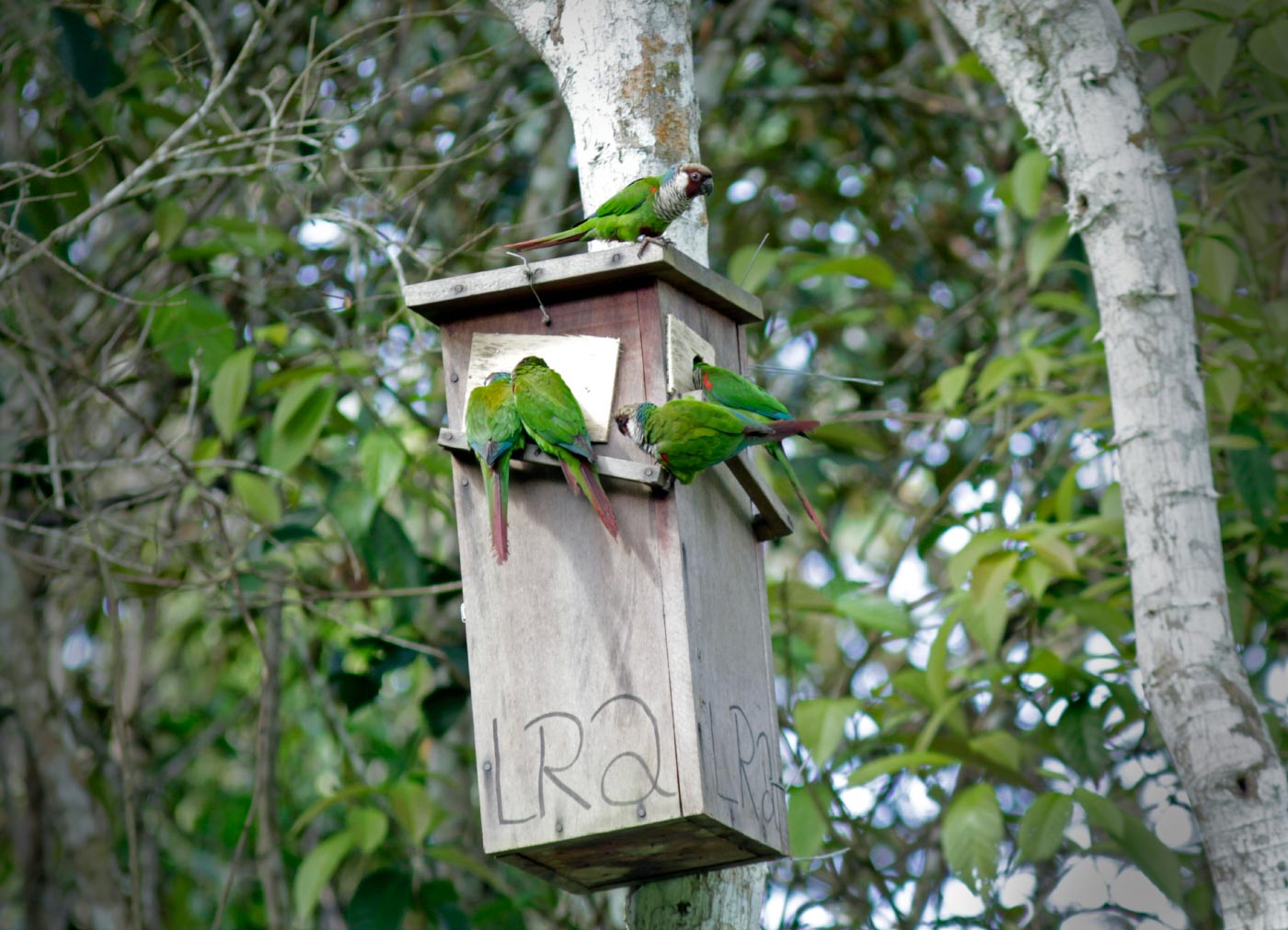 Grey-breasted Parakeets at a nestbox in the Baturité Mountains (F Nunes/Aquasis).

There is little doubt that Baturité's Grey-breasted Parakeets have dramatically increased due to a nestbox programme, which commenced in 2010. The scheme involves weekly inspection of the installed nestboxes, verification and management of invasive species such as bees and mammals, the selection and cataloguing of co-ordinates by GPS of new nestbox sites, ringing the chicks (supplied by the Brazilian government), and repairing and renewing nest substrate of the boxes before and after each breeding season. At the same time, roost sites and natural nests are found through active searches and from interviews with local people. Ringing is important because the presence of marked breeders helps to understand issues such as nest fidelity and breeding site selection.

The project has increased the number of nestboxes to 100, with the greater number of boxes helping to decrease competition for nests, and possibly to dilute the effect of predators. By means of specific actions such as reduction of nestbox entrance size, changing the location of nestboxes with frequent predation, and the capture and removal of predators, the project has reduced predation – but it does still occur, and 48 chicks were lost in 2019. An opossum took advantage of the weathered wood of one nestbox to break it open and predate the chicks, but the main predator continues to be Paper Wasps, with seven attacks on nestboxes and one on a tree-cavity nest. 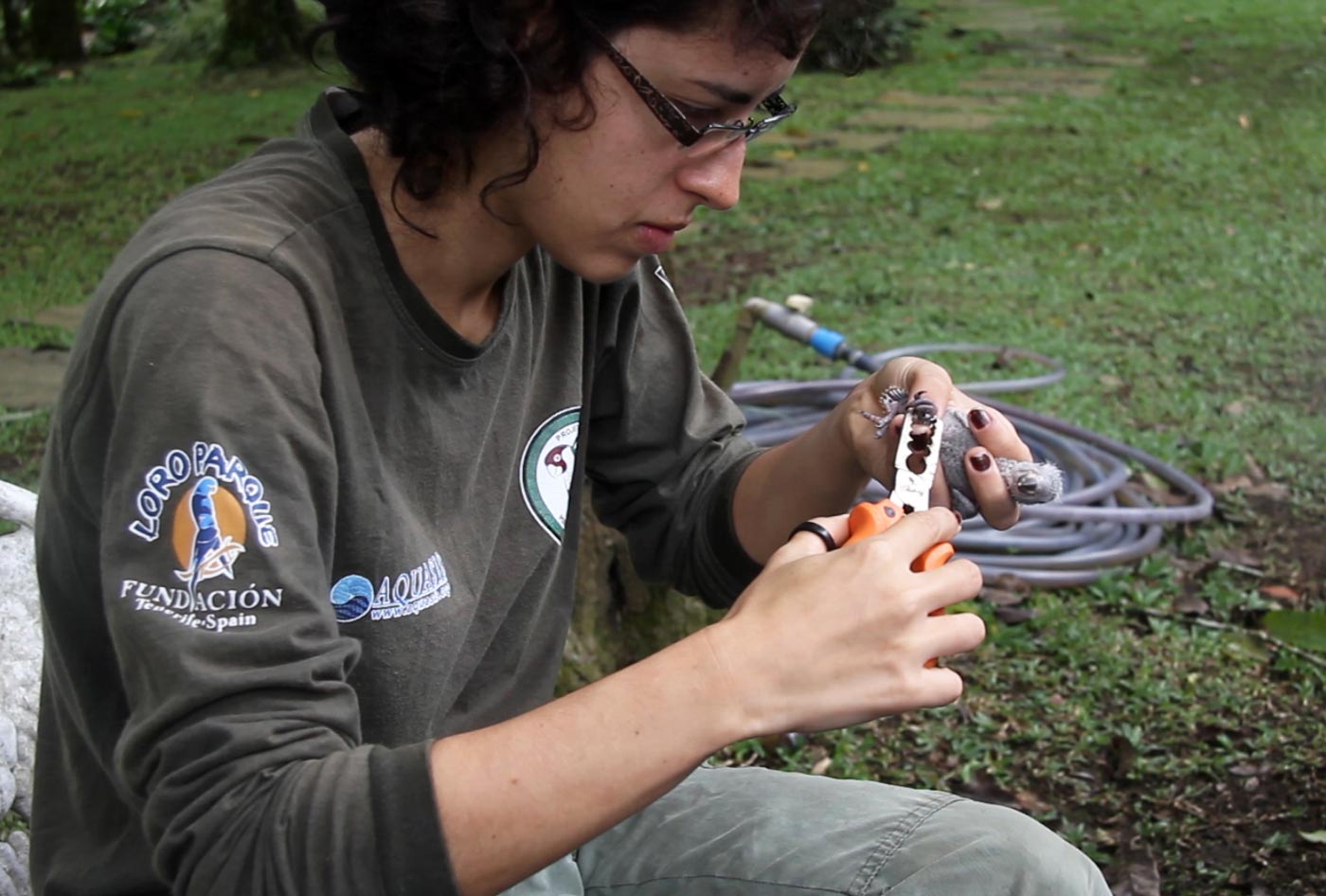 In some of the attacks the chicks were ready to fledge and escaped, while in others the chicks flew prematurely or were injured. Happily, though, the project was able to successfully rehabilitate chicks and place them in foster nests. With the creation of the Grey-breasted Parakeet Wildlife Refuge, the Aquasis team placed eight nestboxes there and in 2019 recorded the first breeding, and two other groups used nestboxes for roosting. This is good news, because although the public area where the refuge was created is centrally located in the species' breeding area, there were no previous records of nesting.

The increase in the wild population in the Baturité Mountains by 2017 was so significant that the IUCN downlisted the species to Endangered. Since then the number of chicks fledging has increased markedly, and the results for the 2019 breeding season demonstrate a veritable nestbox revolution. There were 65 nestboxes occupied by breeding parakeets, which between them laid 523 eggs. From these eggs 379 chicks hatched, and 324 parakeets fledged. The 2019 result means that the project has reached a total of 1,165 Grey-breasted Parakeets fledged in the 10 years that nestboxes have been used. 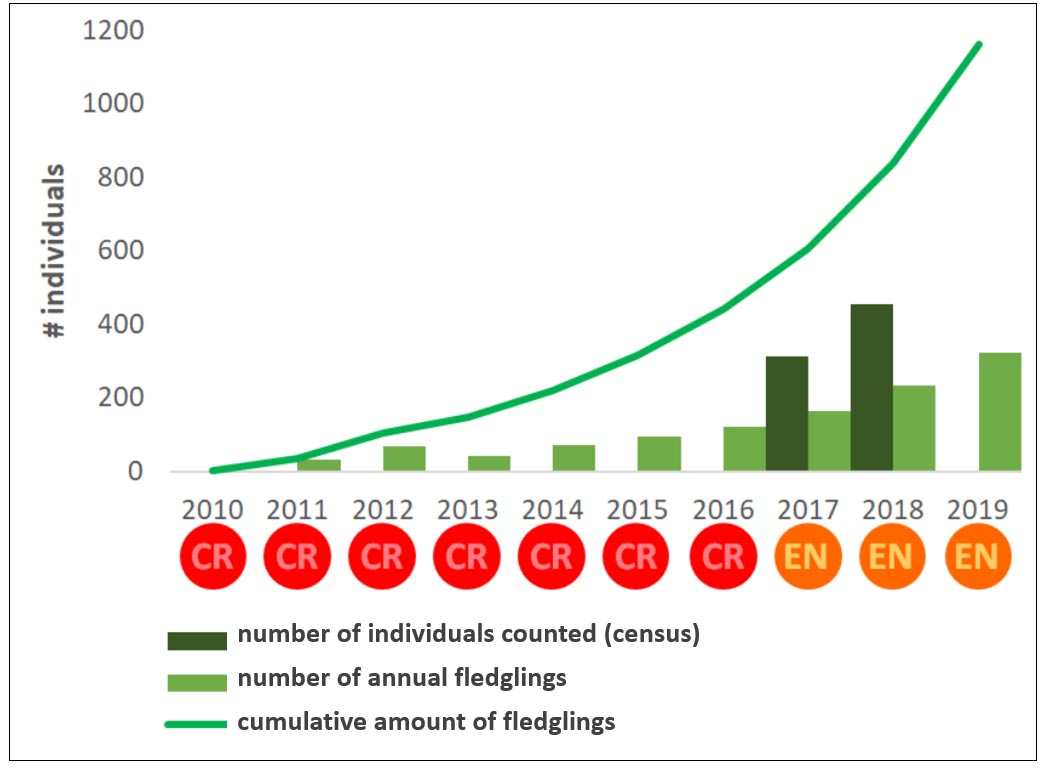 The improving fortunes of Grey-breasted Parakeet over the past decade are clear to see.

The last two population censuses, in 2017 and 2018, revealed an increase from 314 to 456 individuals. In 2018, more than 120 people participated in three days of activities with lectures, training, birdwatching and the pre-breeding season simultaneous counting at the roost sites mapped throughout the year. The participation of volunteers in the census is an incredible tool for engaging the local community and students in conservation and citizen science. In December 2019 a third census took place and the results will soon be available, with a further increase eagerly anticipated.

One final note for this successful project is that in May 2019 the first 12 Grey-breasted Parakeets confiscated from the illegal bird trade were sent to Parque das Aves, a zoological institution specialising in birds, to start a conservation programme in Brazil. These individuals are the start of a co-operative breeding effort, in which the Loro Parque Fundación will take part, to create an insurance population, and to reintroduce Grey-breasted Parakeet into areas of its historical occurrence.