Grey and Timneh Parrots continue to dwindle in Africa's forests

Frequently included with the most traded of all bird species are Grey Parrot and the recently split Timneh Parrot. Large numbers of both species have been trapped in the wild for the international pet bird trade, and high levels of exploitation have become such a threat to wild populations that both have been categorised as Endangered on the IUCN Red List.

Furthermore, in 2017 they were included in CITES Appendix 1, which stipulates the issue of export and import permits only if the specimen was legally obtained, is not to be used for primarily commercial purposes and that there will be no detriment to the survival of the species. Such a situation is difficult to conceive for species which not long ago were considered to be common.

Commencing in Cameroon in 2006, and then continuing in Ghana from 2011-16, the Loro Parque Fundación has supported initiatives to estimate the sizes of remaining populations, their distributions, the intensity of different threats (mainly forest destruction and trapping), and measures to mitigate those threats. In Ghana, the situation was particularly bleak for African Grey Parrot, with an estimated 99% loss of the wild population. It was, and still is, a formidable task to prevent the further decline of these two species, as three recent scientific articles indicate. 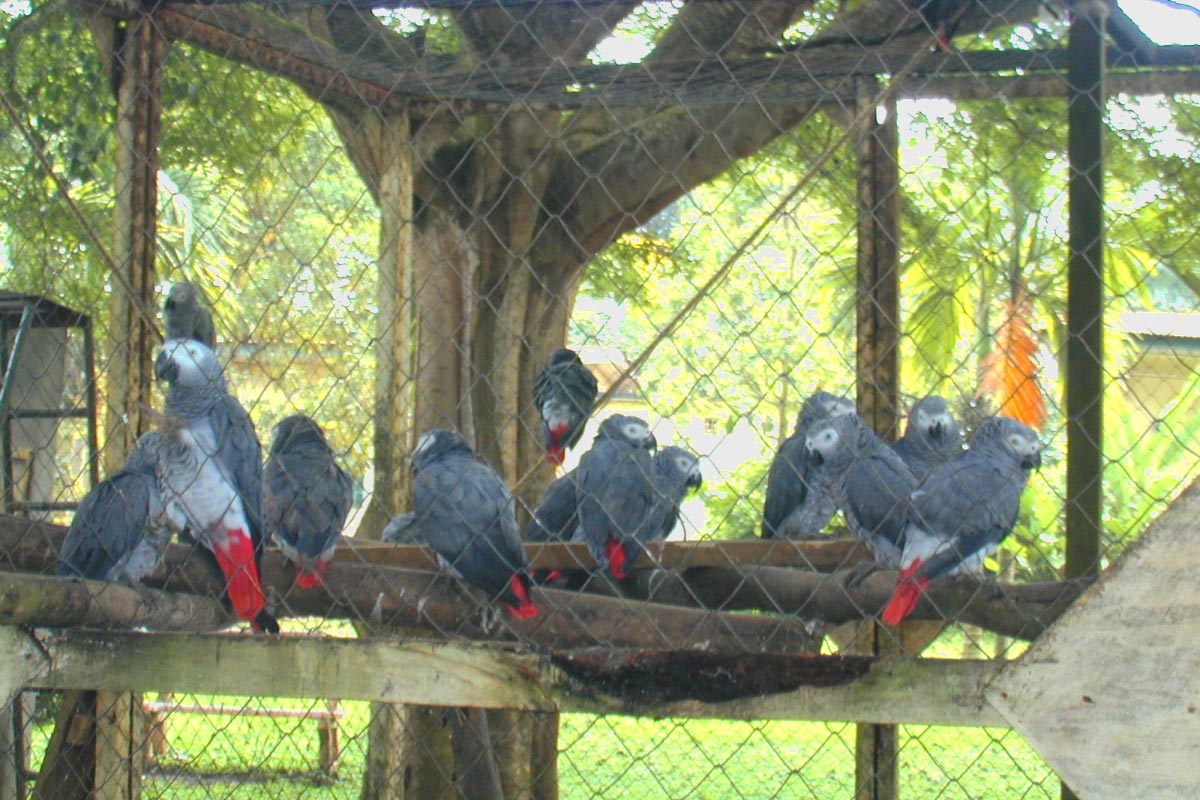 A large number of illegally caught Grey Parrots that had been confiscated by officials – sadly, sights like this are all too common (S Tamungang).

In south-west Cameroon, Dueker et al (2019) surveyed Grey Parrots in the Korup region in 2016. They compared three adjacent landscape types: primary forest in Korup National Park, smallholder agroforestry (small fields of crops inside primary and secondary forest), and industrial oil palm plantations. They found relatively low densities of Grey Parrots, ranging from 0.30 individuals/km2 in the national park and 0.82 ind./km2 in oil palm plantations to 2.70 ind./km2 in agroforestry areas. Alarmingly, the results indicate a decline of at least 85% in this region since 2002, and possibly as much as 97%. Of the 17 tree species in which parrots were observed feeding or roosting, 15 were located in the agroforestry areas, suggesting that these forms of cultivation might play a role in habitat conservation strategies.

Valle et al (2020) report on their surveys of Timneh Parrots in Sierra Leone in 2018. This species has a much smaller distribution than Grey Parrot and might be mainly confined to a few strongholds, one of which is the large and well-protected Gola Rainforest National Park. Timneh Parrots densities were estimated to be between one and three individuals per km2 in the national park and the buffer zone respectively, being similar to recent density estimates of 2.2 individuals/km2 in the Liberian side of the park. Although these results suggest a transboundary population of about 2,400 individuals inside the park (and an unknown number in the surrounding areas), parrot densities of may be generally low, even in its strongholds, and the global population size is probably lower than previously believed. 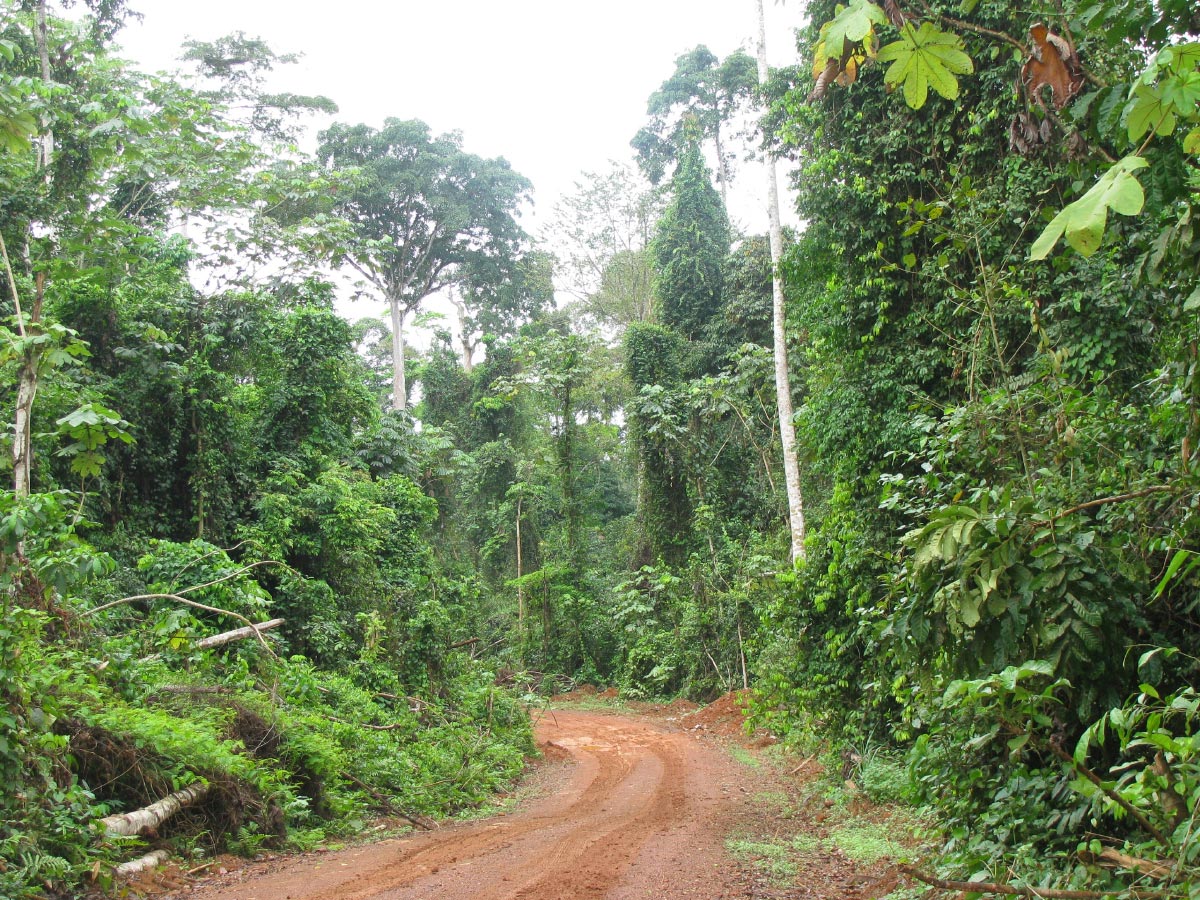 Even healthy tracts of primary forest, such as this in Ghana, are now emptied of Grey Parrots (N Annorbah / MMU).

Martin (2018) examines how ongoing trade can be related to these continuing decreases in the wild populations. Records of international trade from the CITES trade database show the net export of 1,224,755 (74% of the total) wild-caught, and 403,410 (25%) reportedly captive-bred individuals of each species between 1975 and 2014. Most were exported to North America prior to the United States Wild Bird Conservation Act of 1992 and Europe prior to EU legislation in 2007 prohibiting imports of wild birds. From 2006 there has been a dramatic rise in exports of captive-bred parrots, especially to the Arabian Peninsula, and to a lesser extent Central and South-East Asia. This abrupt increase has been mainly due to more captive-bred birds, which exceeded wild-caught exports for the first time in 2007, accounting for 73% of all recent trade. The majority of captive-bred Grey and Timneh Parrots have originated from South Africa, which has at times also been the largest importer of wild-caught parrots.

Martin’s analysis also highlights problems of compliance with CITES regulations in the period 2007-2014. For example, the reported net exports of wild-caught individuals exceeded published quotas by 42,965, and an additional 16,963 were reported as exported from countries that had no established quota. Furthermore, 4,679 were registered as exported from several countries noted as range states, i.e. within the natural geographical distribution of the Psittacus species, but are not known to have any, or barely perceptible wild populations. Finally, there were net exports of 13,264 reported as captive-bred from range states that have no known commercial breeding facilities. Such apparent misreporting suggests that official figures may underestimate the number of wild-caught parrots in reported trade. High levels of pre-export mortality, unreported illegal trade and trade within domestic markets all add to the concern that many more parrots have been trapped than any reports show.

The low densities from the surveys of both species are evidence that the concern is justified and that the wild populations of Grey and Timneh Parrots are likely to continue their downward slide until improved conservation measures are put into place. 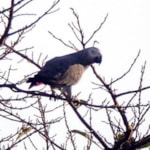