Not long ago my agent sent me an email. It was really meant for Chris Packham. This happens a lot! Presumably Chris gets a few of mine. This one was from a TV producer who was researching an item on 'The harshest-ever British winter: 1963'. Did Chris remember it? And if  not, did Bill?

I replied: "Surely, back in '63, Chris would've been auditioning for the Sex Pistols, sporting a hairdo like a Belted Kingfisher and presenting The Really Wild Show?" Or maybe not yet. In early 1963 Chris would have been less than two years old. I was 21 and certainly remember that wicked winter. I was at Cambridge University, where icy winds swished across the North Sea and headed inland, where they finally fulfilled their function of  freezing the pedals off bike-bound students. Pedals were replaced by skates, skis and skidding, and stately old lawns and colleges were transformed into a set from Frozen. Most galling for me was that the whole rugby season was cancelled, thus scuppering my fanciful ambition of playing for the college first team. Honestly! Oh yes I remember 1963, with Cambridge's pale blue skies frequently filled with flocks of lapwing flapping off west to more clement climes.

I went back to Birmingham, where I optimistically cycled to my local patch. Bartley was a large concrete reservoir – not the kind of expanse you'd expect to get frozen over, but in 1963 it did. It was almost birdless apart from a few coot, and gulls gliding in and attempting to take a very cold bath in the one remaining patch of unfrozen open water. On which there swam ... one duck! Well a drake actually, and one that became, and remains, one of my favourites. A single snowy glowy white male Smew. Porcelain pure, with black eye-patch and black 'cracks' along the flanks, like an exquisite but damaged ornament. 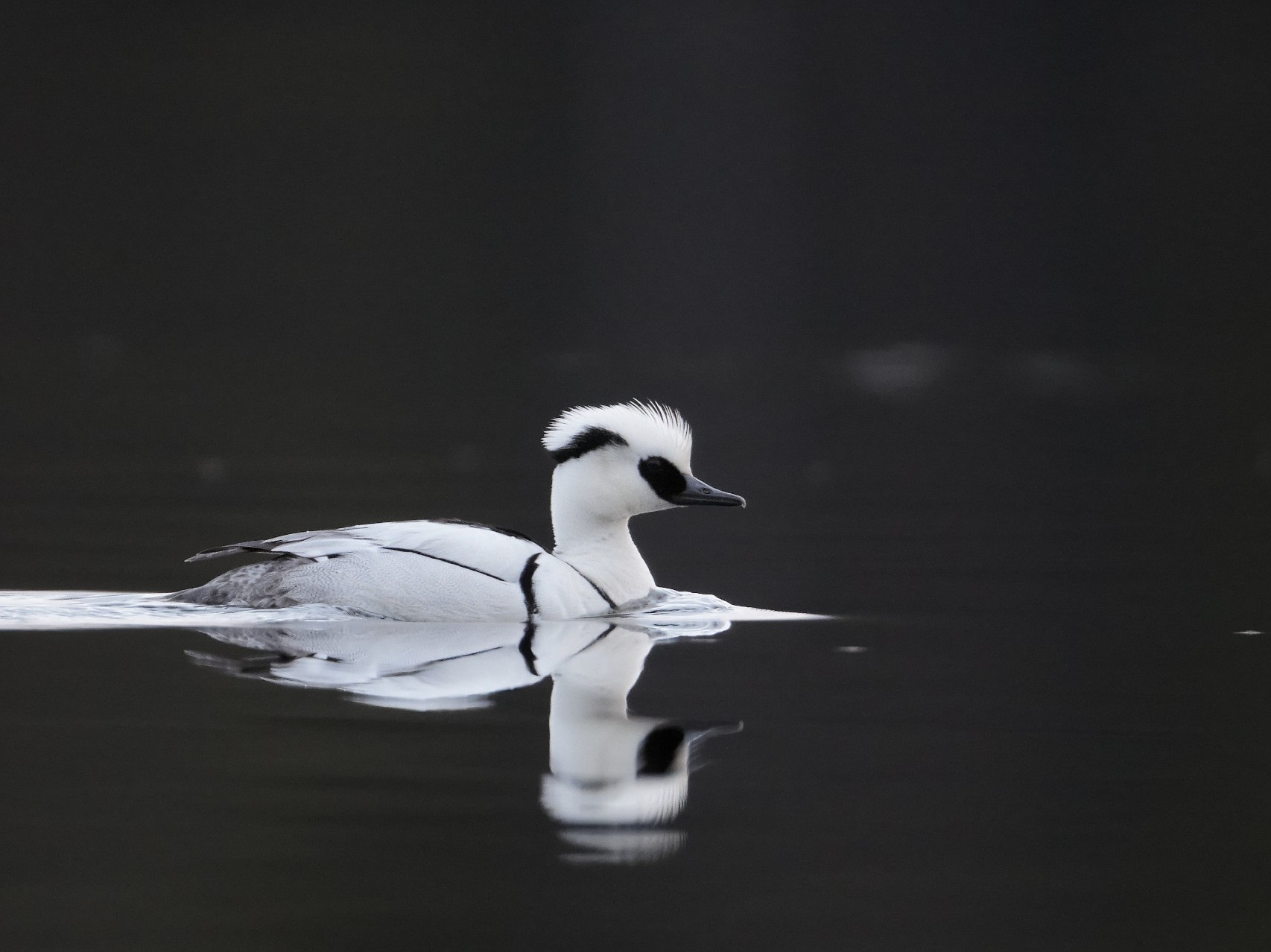 Bill discovered a drake Smew on his local patch during the freezing winter of 1963 (Markus Varesvuo).

That was 1963. I wonder if  there has been another male Smew at Bartley since. And in these days when we hear lots about global warming, I wonder whether I will ever experience truly hard weather again.

This set me thinking: 'Where are the chilliest places I have been birding?' I haven’t yet been to the Antarctic, but I have seen so many documentaries and slide shows that I feel I almost don't need to go. I have been inside the Arctic Circle – just – but the weather was mild enough to feed several million mosquitoes, which then fed on me and my companions.

One contender was a chilling adventure to The Netherlands in early May. It was a sponsored bird race involving a 'patch swap'. A Dutch Birding quartet had to race round North Norfolk while a British team – us! – borrowed the Dutch Polders for a day. No one could've guessed the outcome. The polders looked very similar to the coast of East Anglia, except that it was flipping freezing. Our list was modest – at least I saw a couple more Smew – but by mid-afternoon our fingers were too frozen to hold pencils, bins or scopes. We consoled ourselves by assuming that conditions were equally unseasonal in Norfolk. Not so, the Dutch quartet strolled around on a delightfully mild day and gripped us off with a pair of Slender-billed Gulls. Ouch!

But was that my coldest birding experience of them all? By no means. This may surprise you, unless you have had the same experience. I once spent a morning aboard the RSPB's Avocet Cruise on the Exe Estuary in Devon. The company was amiable. The birds were exquisite, and in much larger numbers than the elusive handful I had driven down to tick off in Devon several years before. About 1963 perhaps, when Avocets had only just started wintering in Britain.

Of course, their numbers have increased hugely since then. Wintering, breeding, always moving into new locations. Unique, elegant, and as dazzlingly pied as a male Smew. It is well worth going on a winter Avocet Cruise, and you must stay on deck. But I do recommend that you purchase one of  those fashionable puffer jackets, like Chris wears. We didn't have those in 1963.