As the breeding season draws to an end, this year’s crop of passerines are shedding their juvenile garb for more flattering first-winter plumage. Notable among these are our leaf warblers – ‘Phylloscs’ – which all add bright greens to their livery of white and grey, partly as camouflage as they forage in the dappled autumn foliage, often accompanying multi-species tit flocks.

Calls are paramount in identifying these swift-moving and often skulking emeralds, particularly the most regular two: Common Chiffchaff and Willow Warbler. The former is notoriously subtly variable in plumage, both with age and range, but its call will generally be a fairly quiet, whistled hweet. However, many juveniles give out a thin high-pitched seeep call well into autumn, while another call has begun to emerge in the species over the last two decades, a kind of see-oo, again high pitched; this genuinely seems to be the evolution of a new call, rather than birders noticing something that has always been there.

Common Chiffchaffs also continue to use their repetitive chiff choff chaff song throughout the year, whereas Willow Warbler will only occasionally utter its thin descending notes, letting its Chaffinch-on-helium song out often as a hard-to-hear subsong. Its call, however, is a more drawn-out soft hoo-eet compared to Common Chiffchaff, and more obviously disyllabic, though it can sound similar and needs practice to separate with ease. Beware also calls of Common Redstart and even Chaffinch and Greenfinch, all of which can be similar, but often more emphatic and louder.

Plumage-wise, juveniles can look dull and scruffy, but fresh first-winter Common Chiffchaffs are bright, with a greenish tinge to most of the upperparts. This is the dullest of the three regular leaf warblers and also the most variable, having an olive, grey, buff or brown tinge, but juveniles are greener and more yellow than adults. The underparts are a dull buff, the face fairly plain with a rather understated supercilium. The primaries project beyond the tertials by no more than roughly half the tertial length, as the species is a short-distance migrant. The legs are usually dark to almost black.

Willow Warblers, by contrast, can appear surprisingly yellow in fresh plumage. An autumn bird will be obviously brighter and cleaner looking than the more sullied Common Chiffchaff, with often extensively yellow-tinged underparts, which bleed on to the strong supercilium, and even onto the ear coverts (‘cheeks’), which have a subtle olive ‘frame’ surrounding them – Common Chiffchaff’s cheeks are generally plain. Willow Warbler usually has pale buff legs, and the primary projection is long, pretty much the same length as the exposed tertials on the folded wing.

The most desired of the autumn leaf warblers for most patchworkers is Wood Warbler. This most bright of species is scarce away from the west of Britain, and livens up a morning’s birding with its bright white belly and chest, canary-yellow throat, breast sides, ear coverts and very prominent supercilium.

The bright yellow cheeks are partially framed with olive at the upper rear, and the upperparts are a slightly grey-tinged olive, with brighter edges to the flight feathers, rump, uppertail and tail sides. The tertials are obviously fringed with white, with full black centres, quite unlike the other two species, adding to its relative gaudiness. In fact, the species often immediately stands out in any roving sylvan passerine flock as a slightly larger green-and-white bird.

Wood Warbler also differs more structurally than the other two, being a little brawnier looking and with a truncated-looking rear, caused by its short tail, which particularly stands out from underneath. It also has a very long primary projection, often longer then the overlapping tertials.

The lower mandible can appear more orange in colour than the other two species’ pale yellow, though all three have a largely pencil-lead grey upper mandible. Wood Warbler utters a melancholic, quiet pew as an anxiety call, though a sharp zip can also be heard (though this can be hard to detect if Long-tailed Tits are present in a flock), but the species is generally silent in autumn. 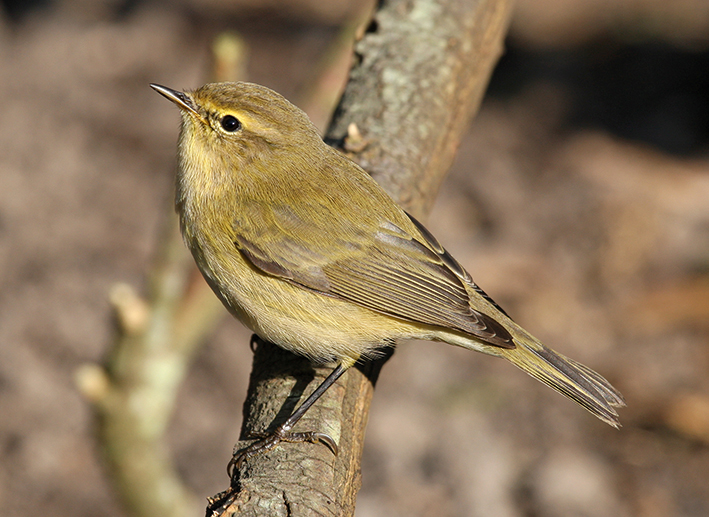 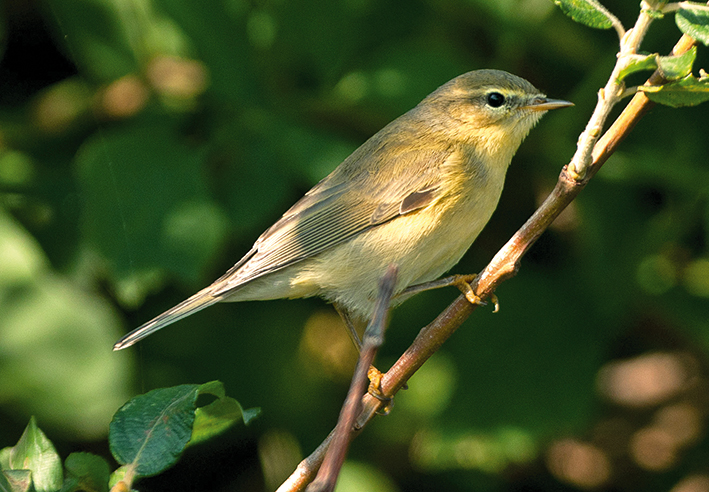 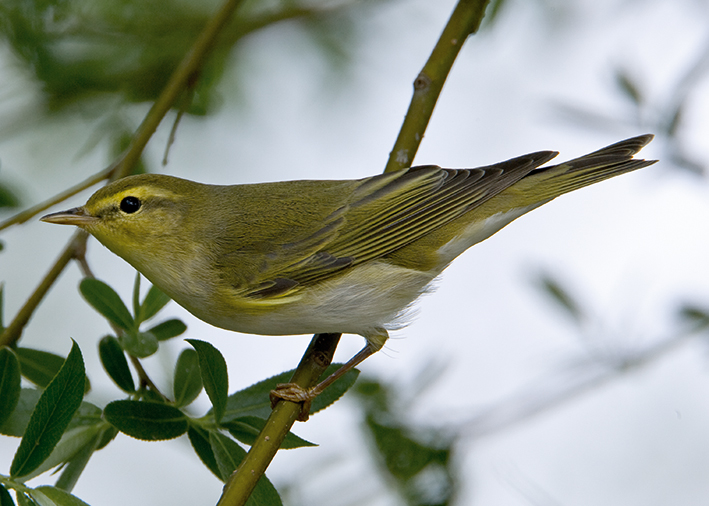