All Clear on the Cape

For over 25 years now, I've read about the fabled place that is Cape Clear.

From the archives it can be seen that there are sometimes massive passages of Great Shearwaters and Cory's Shearwaters with hundreds, sometimes thousands, a day passing when conditions are right. Not surprisingly the island has a high pedigree when it comes to rarities. These have included: Alpine Swift (1829), Rose-breasted Grosbeak (1962), Fan-tailed Warbler (1962), Little Swift (1967), Fea's/Zino's Petrel (1974), Indigo Bunting (1985), Gray Catbird (1986) and the highly prized Blue-winged Warbler (2000). All of these mouthwatering rarities were firsts for Britain and Ireland, and a second was a Yellow-bellied Sapsucker (1988); in addition there have been numerous rarities over the years, plus a regular supply of scarce migrants.

For a long time, I made the mistake of thinking that Cape Clear was a headland on the southern end of Ireland (capes usually being joined to the mainland), only later learning that Cape Clear was an island off the southwestern coast and is in fact Ireland's most southerly inhabited point. I'd never given a thought to visiting the island, any time off in October usually being spent in Norfolk, Cornwall or the Scillies. This year I had time to get away for a few days and thought of going to Cornwall; however, the thought of a long and unpleasant drive down and expensive accommodation made me think of going elsewhere. I thought of Southern Ireland and then researched Cape Clear, and was pleasantly surprised to find how easy travelling down to the island could be. Using the Internet, I booked flights, car hire and accommodation with no problems at all.

British European fly daily to Cork from Birmingham and I think other low-cost airlines like Ryan Air and BMI Baby also fly to Cork. We hired a car for £80 for the 6 days. An alternative would be a taxi from the airport to Baltimore, but the Irish birders we spoke to estimate that the cost of this would be £80-£100 return so a hire car is more flexible as we also spent time at Mizen Head and Kinsale. There is also a bus service from Cork to Skibbereen and Baltimore (see the Bus Eireann website).

We spent the first night in a B&B in Baltimore, which was 28 euros each at the Abbey View Guest House. This allowed us to reacquaint ourselves with Irish Guinness and the culinary delight that is the Full Irish Breakfast. It would have been possible though to have crossed to Cape Clear that evening and we'll probably do this when we go back. The mail boat the Naomh Ciarán 11 makes at least two crossings per day. The first ferry out next morning was at 11:00. We parked the car at the free car park at the harbour and were assured that it would be quite safe - as indeed it was. There were quite a few Irish birders on the crossing who were very friendly and full of good advice. The crossing was flat as there is very little open water; the ferry runs in sheltered water alongside Sherkin Island for most of the way. There was a very soft drizzle on the way across which confined us to the cabin and as the island came into sight, I was surprised to see how hilly and rugged it was, with sea cliffs on much of the shoreline and mountains in the interior. Boats dock in the North Harbour and the Bird Observatory, a large white house situated on the harbour side, was pointed out to us.

We'd booked to stay at O'Driscoll's B&B, which is part of a complex of holiday cottages that includes 'Ciarán Danny Mike's' Pub. It was not luxurious but clean, warm and comfortable with some ensuite bedrooms, kitchen facilities and a large lounge with books and a TV - perfect for birders. All meals were taken in the nearby pub. My total bill for 3 nights B&B for 2 persons, 6 evening meals, a couple of toasties and several pints of Guinness came to 250 euros (about £160) which I thought was very reasonable. Groups of birders could either stay at the observatory or rent one of the self-catering cottages that can accommodate six persons.

After settling in, we had a walk down to the observatory where we met resident warden Steve Wing and his wife Mary. Steve is a builder by trade and has restored the observatory to a high standard with self-catering accommodation for birders of a much higher standard than that usually available at bird observatories. They made us very welcome with Steve giving us an island map and indicating the places where, and where not, to go. Like most observatories, they're dependent on donations, sales and birders using the accommodation for their continued existence. At a time when many birders stay at home waiting for their pagers to go off, many observatories are feeling the pinch due to a lack of visitors. Hopefully this article will encourage more birders to visit this magical Island and stay at the observatory. 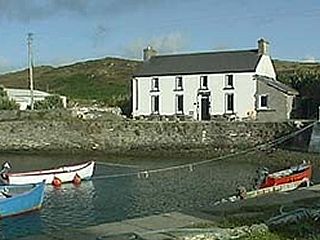 We soon settled into a routine, up and out birding at first light, checking some of the nearby migrant traps like 'the Waist' and Cotter's Garden, where the Blue-winged Warbler was found. Breakfast was taken late, usually around 10:00, and was of sufficient size that there was no need for lunch, leaving plenty of time to explore further afield, checking out the two bogs, the lake and small plantations or doing a seawatch. Most of the regular Irish birders seemed to prefer to go out alone, checking each hotspot and keeping in touch with mobile phones. This assured maximum coverage. At 'the Waist' is a tennis court, now in disrepair, that features in Tony Hawks' book Round Ireland with a Fridge. This hilarious book describes Hawks' epic journey when he was challenged to hitch-hike around Ireland with a fridge. Cape Clear was one of the places he had to visit and he tells of a man who wanted to play tennis but couldn't as there wasn't a tennis ball to be found on the island! We had dinner each night in Ciarán Danny Mike's pub at around 19:00, walked down to the Observatory for the log at 21:00 and finished the evening with further drinks in Cotter's Bar. The pubs close when the last one leaves, which can be late.

Cape Clear is an island of peace, solitude and history. You can walk for miles without meeting anyone and all of the roads are single-track, usually with a strip of grass down the middle. The interior is very hilly and strong boots are advised, as are waterproofs as the weather, like on most Atlantic islands, can be very changeable. We were very lucky with only a little rain between the sunny periods.

The only thing missing from our trip were rare birds. Unusually for this time of the year, the good weather over the Atlantic meant that rarities were in short supply and even the presence on the island of Dennis Weir, who found both the Sapsucker and the Blue-winged Warbler, failed to turn up anything special. However, I'm told that the Lesser Whitethroat we saw is a good bird for Ireland and it was always a pleasure to see the resident Choughs and Ravens playing in the wind, Peregrine and Merlin over the hills and moors, the winter-plumaged Black Guillemots, seals and dolphins on the sea and the passing seabirds. There were also plenty of more common birds to work with, large flocks of finches and Meadow Pipits to search through and many Goldcrests and Chiffchaffs that you always have to look at - just in case! Typically, in the days after our departure there were sightings of Yellow-browed Warbler, Little Bunting, Common Rosefinch, Ring Ouzel and a big influx of Redwings. We had such a great time on the island that any rare birds would have been an added bonus. We will be back.