A guide to Portland and the surrounding area

The Isle of Portland in Dorset is one of the best-known birdwatching sites in Britain, and has been frequented by ornithologists since around 1918. Jutting five miles out to sea from Chesil Beach, Portland is a unique place, covered with old disused quarries, farmland, grassland and a scattering of shrubs and hardy Sycamore trees. Even on the sunniest day in summer, Portland seems to create its own weather system, often being windy when nearby Weymouth is basking in sunshine with slight cool breezes. It is this combination of geographical positioning and habitat that make it so excellent for watching migrant birds, both on land and at sea. The island's true potential was fully appreciated back in 1955 when the bird observatory was established in the old lighthouse.

Spring migration often brings a greater variety of birds, although they don't tend to linger for long. The beginning of March heralds the arrival of the first returning Wheatears and Chiffchaffs, and their numbers gradually build up through the month to a peak at the beginning of April. Around this time they are joined by other early migrants, typically Ring Ouzel and Black Redstart, which tend to favour the quarries that are scattered around the area. The peak passage period is between mid-April and mid-May, when the number of birds passing through each day can number thousands. Species such as Common Redstart, Whinchat, Yellow Wagtail, Tree Pipit, Turtle Dove, Reed Warbler, Pied Flycatcher and Spotted Flycatcher occur in good numbers, with less significant numbers of Nightingale, Wood Warbler, Lesser Whitethroat and Firecrest. There is also a small but regular passage of different raptor species, notably Hobby, Merlin and Honey Buzzard whilst Short-eared Owls regularly pass through, and have been particularly conspicuous so far this autumn. The real attraction of Portland this time of year is the subrarities that appear consistently year after year. Spring Hoopoes, Serin, Golden Oriole and Wryneck are regular, and Woodchat Shrike and Ortolan Bunting are near-annual. There are also spring records of Red-footed Falcon, Red-breasted Flycatcher, Red-rumped Swallow, Bee-eater, Black-headed Bunting and Rock Thrush to name but a few.

Seawatching off the Bill SY677685 can be particularly rewarding at this time of year. The local speciality is the small but regular passage of Pomarine Skuas that occurs from mid-April to the beginning of May. Other species of skua are more numerous, with Arctic Skuas being noted most days during the spring months, and Great Skuas also frequently past. Manx Shearwaters are also a feature of spring passage passing in good numbers, with occasional Cory's and Balearic Shearwaters mixed in with them. 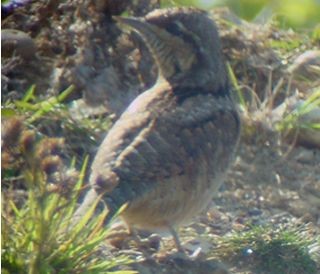 The list of commoner migrants to be found in the autumn is similar to that of spring, but generally involves greater numbers. Sub-rarities are again a speciality of the season, particularly Melodious Warbler, Barred Warbler and Icterine Warbler, Tawny Pipit, Ortolan Bunting, Wryneck, Woodchat Shrike and Lapland Bunting. Visual passage of birds in the autumn can be superb, and includes the commoner finches, buntings, thrushes, pipits and Skylark. Flocks of these birds are worth searching through for scarcer species such as Serin, Brambling, Redpoll and Tree Sparrow. Rarity records for autumn, to name a few, include Alpine Swift, Short-toed Lark, Rose-coloured Starling, Red-eyed Vireo, Northern Parula, Pechora Pipit and a variety of warbler species such as Booted Warbler, Greenish Warbler, Arctic Warbler, Pallas's Warbler, Dusky Warbler, Orphean Warbler and Bonelli's Warbler.

Offshore movements can again be impressive with similar species as those found in spring. Terns and waders can often be observed moving past the Bill, and less frequently, Little Gull, Gannet, Common Scoter and Sooty Shearwater.

Chesil Beach connects the Isle of Portland to the mainland via a causeway at Ferrybridge SY668755, which in itself is worthy of a mention due to the variety of wader species that can be found there during the spring and autumn. Ringed Plover, Dunlin, Redshank, Turnstone, Sanderling, Redshank and Oystercatcher are abundant, with lesser numbers of Knot, Little Ringed Plover, Ruff, Greenshank, Spotted Redshank, Common Sandpiper, Whimbrel and Black-tailed and Bar-tailed Godwits. Another feature is the annual passage of Curlew Sandpiper and Little Stint that trickle through in small numbers, particularly in autumn. Ferrybridge has had its fair share of rarities including Temminck's Stint, Sociable Plover, Long-billed Dowitcher and Buff-breasted Sandpiper. Recently Ferrybridge was visited by a Kentish Plover and a Semipalmated Sandpiper. Just across the causeway from Ferrybridge is Portland Harbour, excellent at the right time of year for seaduck, divers, auks and grebes.

Just a couple of miles away in the centre of Weymouth are the RSPB-owned reserves of Radipole Lake SY677796 and Lodmoor SY687807 both of which are similar in habitat: low-lying marshland with reedbeds, shallow lagoons, ditches, and open water. Wintering wildfowl and waders are features of both reserves and most species linger on into spring and re-appear in the early autumn. Garganey, Teal, Wigeon, Pintail, Gadwall, Shoveler, Pochard and Tufted Duck are often present in good numbers, the dabbling ducks preferring Lodmoor whilst the diving ducks favour Radipole Lake. Waders such as Golden Plover, Snipe and Lapwing are particularly numerous, and all the species that can be found at Ferrybridge can also be observed at Lodmoor and Radipole. Radipole in particular is renowned for the diversity of terns and gulls that are often present. Black Terns and Roseate Terns are regular on passage, whilst Mediterranean Gulls are observed here more frequently than anywhere else in the region. Little Gulls, Iceland Gulls and Glaucous Gulls are annual, whilst much rarer species recorded include Laughing Gull, Franklin's Gull, Sabine's Gull and Bonaparte's Gull. Bearded Tits, Cetti's Warbler, Little Egrets and Bitterns can be found this time of year, and other species of waterbirds can and often do turn up, such as Spotted Crake, Great White Egret, Little Bittern, Spoonbill, Purple Heron, White Stork and Crane. Other rarity records include Glossy Ibis, Black Stork, Grey Phalarope, Lesser Yellowlegs and White-winged Black Tern.

The whole area really is outstanding for birdlife and gives the birdwatcher an excellent opportunity to see a wide range and quantity of species. Timing at Ferrybridge, Lodmoor and Radipole is not too critical, but can affect the birds you're likely to encounter at Portland. Early mornings are best, particularly in the spring when birds move through more quickly. Persistent southerlies and easterlies are most likely to produce rarities. Parking at each site is provided and signposted well (if in doubt see grid references below). Other sites worthy of investigation are Church Ope Cove SY696712, Verne Common SY694740, Pennsylvania Castle SY697711, Suckthumb Quarry SY687708, Barley Crates Lane SY682710, Reap Lane SY682705 and the Top Fields SY683696. The entire area gets packed on fine weekend days, so early mornings are best to keep disturbance to a minimum!