A line of Cape Gannets, monochrome against distant storm clouds above the Cape of Good Hope, flap-glide steadily along the South African coast. Unknowingly, perhaps, they have momentarily straddled the two great southern oceans. Their progress is stately as they quickly become distant specks lost to the South Atlantic. Below them our progress is less serene. The small vessel Destiny pitches into a southwesterly blow and a short, uncomfortable sea. Its queasy crew of birders assembled from around the world have left Simonstown harbour, outside Cape Town, on a pelagic trip in search of close encounters with the seabirds of the deep-sea fishing grounds. 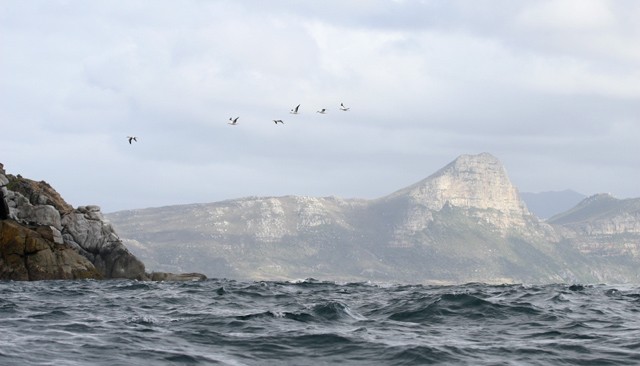 Our veteran guide is Alvin Cope, resplendently Gandalfesque in shorts, white wellies, a sou'wester and long white beard. The sea and its wildlife run in the family: the previous day, Alvin's son had taken us in an even tinier boat to enter the icy water in a cramped steel cage to gaze into the black, doll-like eyes of a Great White Shark. I brace myself against the pitching sea and clutch the foam-flecked gunwale, and fervently wish not to enter it again!

To keep my sea legs I use the old mariner's trick of concentrating on the horizon, willing the line's equilibrium to be broken by the angled shear of the day's first albatross. As if in answer, the grey and white form of a Shy Albatross arcs across our wake and I grin helplessly, despite the dismaying knowledge that thousands of these creatures are hooked and drowned each year by commercial fisheries. These losses far exceed their glacial rate of reproduction and occur despite the majority of the world's albatross species being threatened with extinction. The albatross towers across the boat and we lean to follow in synchronised wonder. 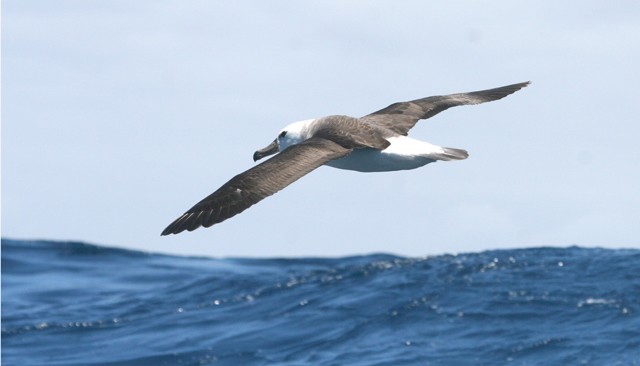 Twenty-five miles out and the deepening water eases and swells an emerald green blue, the distant Cape a faint blur. We are making for the trawl grounds, the deep-water zone known as the Cape Canyon. The skipper checks the radar screen, a brief grunt of Afrikaans elicits a nod from Alvin and we change course, rapidly gaining on a distant vessel trailing a cloud of seabirds behind it. Soon the giant trawler Harvest Miriam Makeba — out of Saldanha, some 200km north of Cape Town — shoulders through the heaving swell above us, its towering sides seemingly uninterested in us. Unseen winches relentlessly heave its enormous net skywards, a teeming mass of unseen catch below setting the net's straining cords angling into the pitching seas. The rear of this floating factory is a maelstrom of swirling tubenoses and many scythe past at point-blank range, zeroing in on the fish by-catch. 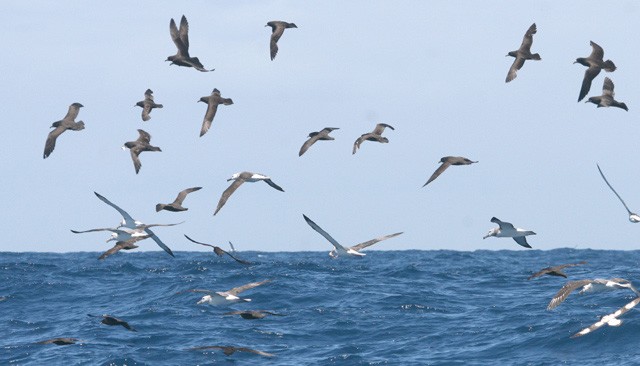 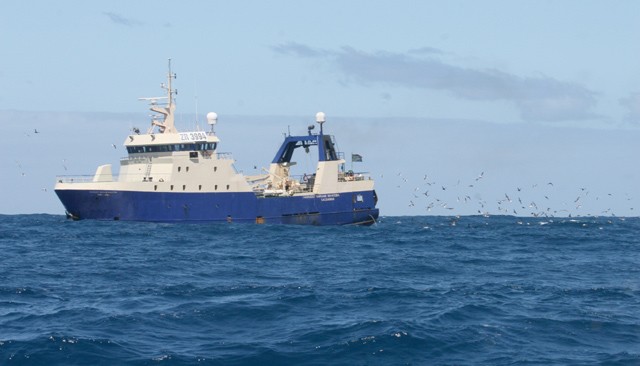 The clouds that had accompanied us across False Bay and into the Atlantic have bled away; a bright African sun beats down as we drift alongside the emerging net. Taut-winged shapes hurtle by and in the feeding frenzy birds are being called excitedly on every side. Grotesque giant petrels clamour over fish scraps and a huge Yellow-nosed Albatross scythes past close enough to touch. 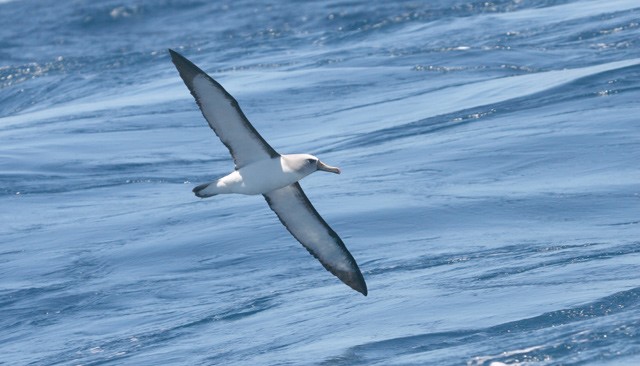 Atlantic Yellow-nosed Albatross. Two forms of this 'mollymawk' occur on Cape Pelagics, this one and the 'cleaner headed' Indian Yellow-nosed. (Paul Pearson).

Diminutive black-and-white Pintado Petrels, a graphic designer's dream, flutter below. As we settle down and mutely admire the drama filling the air around us, the inherent conservation dilemma of the view sinks in: we are hoved to alongside the machinery of the very industry by which these seabirds and particularly albatrosses have become so endangered. And as I continue to muse, spellbound, I recognise that this paradox is not unique; we eco-tourists can sometimes tread a moral tightrope. On birding trips to Asia I have routinely used logging roads and have even employed local hunters to help locate elusive forest birds. But there can be some optimism — our trip is run by Capetown Pelagics, a non-profit organisation. All their profits are donated to albatross research and conservation, including Birdlife International's Save the Albatross Campaign. An Arctic Tern, familiar among the southern-hemisphere treasures, alights on our now silent outboard motor and, it seems, momentarily watches us. 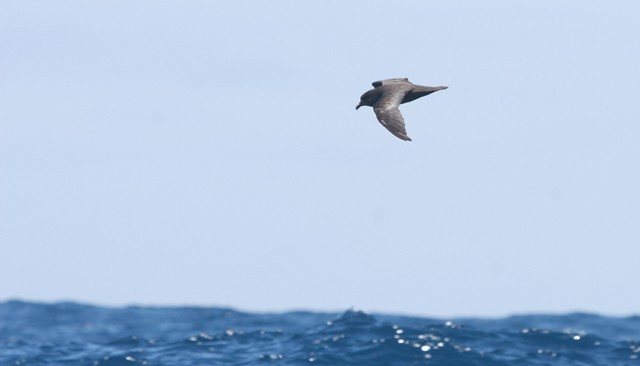 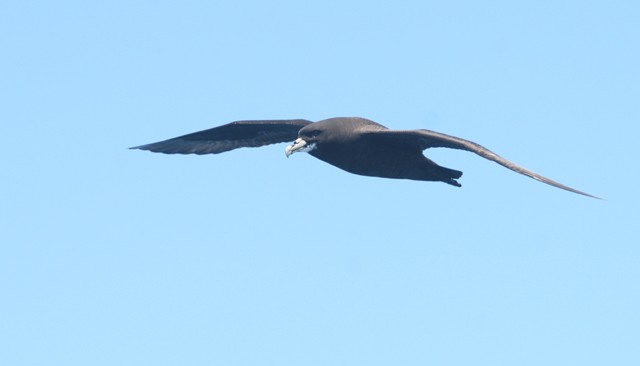 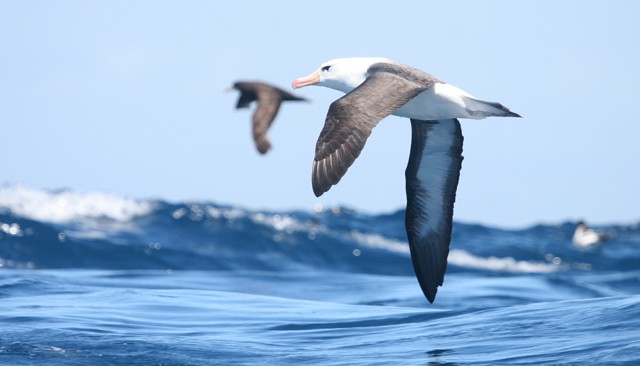 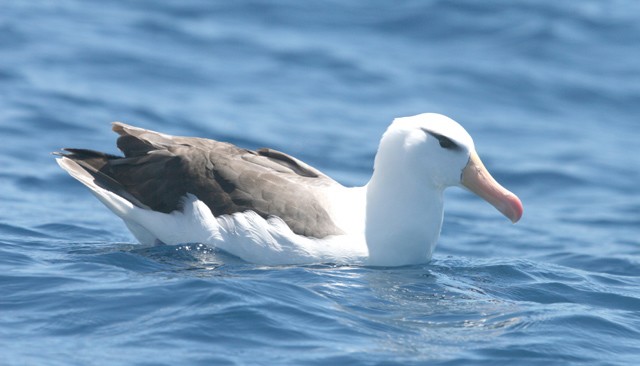 I am alongside Matt, a Californian birder who has scanned robotically, incessantly. Suddenly he shrieks 'spectacled!' and indicates a dark petrel speeding away from us. Spectacled Petrel is a national South African rarity but this one is always heading away and as it enters the swirl of similarly hued White-chinned Petrels is lost to view. My birding instincts instantly re-ignite, banishing my earlier reverie. Tense minutes pass as we scour the throngs of birds, searching for the spectacled. And then one of those serendipitous moments occurs, which you and your birding friends will recount to one another long after: the Spectacled Petrel re-appears, apparently from nowhere, and settles confidingly close to the boat and our good day is sealed. Eventually the Miriam Makeba bears away and churns onwards, towards other catches, and we set course for home. 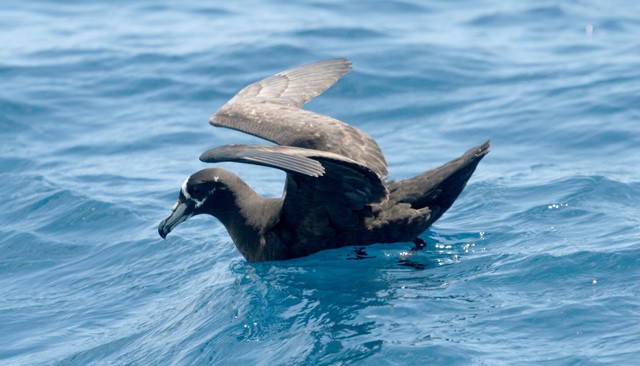 Spectacled Petrel. This species can show significant variation in the width, length and shape of white bands and this bird lacked a complete set of 'spectacles'. It was therefore scrutinised carefully amongst the ubiquitous and closely related White-chinned Petrels, some of which showed variable amounts of white head markings, particularly on the chin and throat, but not the dark bill tip as seen here. (Paul Pearson).