29 June 2020 started on a sombre note. The previous day had witnessed suspected nest predation by Carrion Crow of one of the Little Tern pairs, and meant I was undertaking a long day of corvid monitoring in the sanctuary on top of general duties as Shorebird Warden at Gibraltar Point.

The previous day had been outstanding for Common Swift movement, with 19,418 birds logged by James Siddle and Reserve Warden Kev Wilson (KMW). With force 7-8 south-west winds forecast it looked likely we would enjoy more of the same, though I suspected the previous day would have been the 'big one' for this year.

At 4 am the first swifts appeared over the east side of the reserve in the improving light, though initially just in occasional small groups. By 4.20 am, flocks were now pulsing though, largely at eye level as they followed the contour of the East Dunes and continued down to where I was positioned on Millennium Ridge at the extreme south end of the reserve and the northern tip of The Wash.

By 4.45 am, heavy movement was now taking place on a broad front with passage over the West Dunes, as well as over the sea. The spectacle was immense, with swifts coming from as far as the eye could see – an endless stream visible as far north as Skegness, which is more than 5 km away. A vast group of up to several thousand was also forming, hawking over the Plantation, with birds coming and going all the time.

I alerted KMW via text; my first message read: "shocking swift passage". We arranged for him to take over counts from Mill Hill for a period of time; I was keen to implement the first stage of getting a new Little Tern nest enclosed ahead of the night, safe from the relentless Fox pressure this season.

Incredibly, by 6.30 am I had logged 22,459 swifts moving south through the reserve. It felt like it could be a record day and I put out words to that effect on the local group. By 7.30 am I had resumed counting and movement was still coming thick and fast. The morning was spent scanning from the ridge, where I could simultaneously watch over the habitat where our Little Terns and Ringed Plovers are nesting, interspersed by handful of essential visits into the colony. On one occasion I had to dash across to a Ringed Plover pair whose eggs had been blown out of their scrape by the violent winds and were rolling down the beach – two of four were located and thankfully the birds took back to incubating.

I have been involved in days of huge Common Swift movement at Gibraltar Point before but this was obviously something truly incredible – literally breath-taking – and not just the phenomenal numbers involved, but the fact that overcast conditions brought them low, meaning the sight and sound was intensified with the birds funnelling down Millennium Ridge and regularly passing within feet of me.

Movement had all but ceased by 12.30 pm, with the vast majority of birds being recorded between 4.30 am and 10.30 am. After tallying up, my mind was blown by the figure: 45,844! This total we reached was almost certainly not reflective of the true number that flew south through the reserve during this period, as some of that time was spent fully focused on shorebird priorities. Only a few hundred were added over the next four and a half hours, with the final total for the day standing at a staggering 46,026. This is considered to be the highest single-site count made in Britain, surpassing the previous highest of 31,350, which was also made at Gibraltar Point, on 31 July 2019. 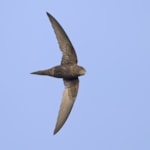