The RSPB's oldest volunteer has just turned 100, proving that if you're passionate about the environment, there is something you can do to help no matter what your age. And the charity's oldest volunteer is urging everyone else to do their bit for nature too.

Grace Salter, 100, began volunteering for the RSPB at the grand age of 94 and has been supporting the organisation with her efforts ever since. She began by helping with the catering for weekend work parties at her local RSPB nature reserve, Rainham Marshes, in 2000, and is now kept busy by helping in the café, clearing and cleaning tables. Grace says: "I just love everything about coming to Rainham Marshes: the people, the place - it's lovely!" 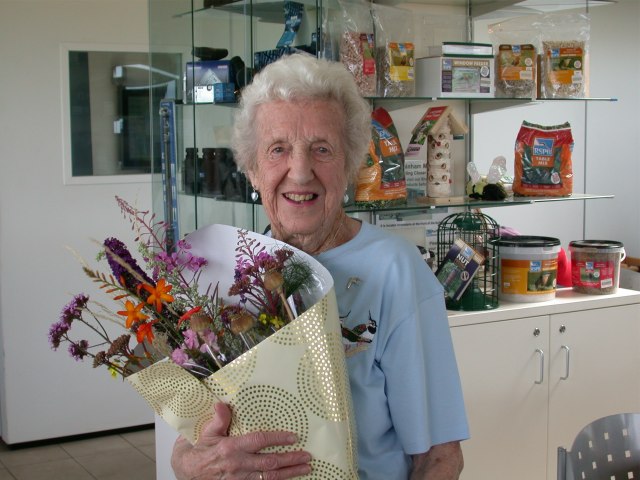 Sue Housden, Volunteer Co-ordinator at RSPB Rainham Marshes, says: "Grace is an icon within the organisation both for her efforts and her stamina and we are very proud to have her volunteering at the reserve at such a wonderful age."

Since leaving school aged 14, Grace's jobs have included displaying curtains in a local drapers, assembling beaded lampshades and working as a ladies maid, which entailed washing and cooking for the gentry. Despite never taking a driving test, she learned to drive a tractor when she relocated to Wales during the Second World War and was soon working on farming roles such as tending to the plants in the greenhouses. At this time, women were also expected to help with the war effort and Grace began working in a munitions factory in Hereford, helping to make bullets, but had to give it up due to the fumes which made her ill. Other employment duties included working for the Stock Exchange in London, who were so impressed with Grace that they asked her to return even though she had officially retired.

As if all that was not enough, Grace now spends as much time as she can at Rainham Marshes, helping out in the café and speaking to visitors and members. She says: "I enjoy doing things and meeting people and getting out and about. I love wildlife too and always have wildlife holidays so this combines my interest in wildlife and a chance to meet new friends."

Carys Morgan of RSPB Rainham Marshes said: "The staff and volunteers are very proud to be working with a volunteer who has reached such a wonderful age and the family make a very friendly addition to the weekend team, making visitors welcome and keeping the café tidy."

RSPB volunteers help the wildlife charity to carry out vital conservation work across the UK and overseas. Without them, the charity wouldn't be able to look after as much habitat, create as many new sites or enthuse as many new people about wildlife as they do. Volunteers carry out all sorts of work for the RSPB from physical work like tree planting, scrub clearing and fence maintenance to helping in shops on nature reserves, giving guided walks and raising funds for its work. Whatever your age, experience or the time you have available, the charity has something for you.

To find out how you can volunteer with the RSPB, visit www.rspb.org.uk/volunteering.

The RSPB currently has over 13,500 volunteers giving a gift of time of over 837,000 hours, equivalent to 465 full time staff. In 2009, 552,000 people also volunteered an hour of their time in the RSPB's mass participation bird survey, the Big Garden Birdwatch.