World biodiversity 'declines by over a half since 1970'

Global biodiversity is declining at an alarming rate, putting the survival of other species and our own future at risk, according to a major new report.

The Living Planet Report 2016, produced by the World Wildlife Fund (WWF) in conjunction with the Zoological Society of London (ZSL), has concluded that global wildlife populations have fallen by 58 per cent since 1970 and that if the trend continues, that decline could reach two-thirds among vertebrates by the end of this decade.

There is currently no sign that this decline, an average of two per cent per year, will decrease, unless urgent action is taken to reduce humanity's impact on species and ecosystems. The report highlights how human activities including deforestation, pollution, overfishing, introduction of invasive species and the illegal wildlife trade, coupled with climate change, are pushing species populations to the edge as people overpower the planet for the first time in Earth's history.

Mike Barrett, Director of Science and Policy at WWF-UK said: "For the first time since the demise of the dinosaurs 65 million years ago, we face a global mass extinction of wildlife. We ignore the decline of other species at our peril — for they are the barometer that reveals our impact on the world that sustains us. Humanity's misuse of natural resources is threatening habitats, pushing irreplaceable species to the brink and threatening the stability of our climate.

"We know how to stop this. It requires governments, businesses and citizens to rethink how we produce, consume, measure success and value the natural environment. In the UK, this demands a serious plan to strengthen protection for habitats and species and new measures to fast track low-carbon growth. Britain, like all developed nations, must take increasing responsibility for its global footprint. December's conference on the UN Convention on Biological Diversity would be a good place for the UK government to signal that it's serious about helping tackle the global loss of species." 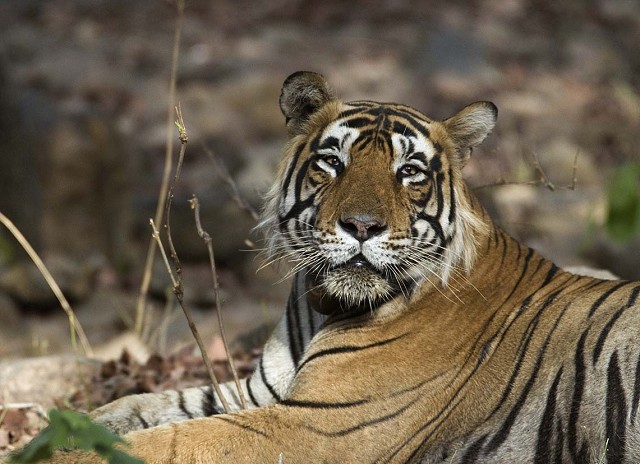 The world Tiger population has recently increased as a result of targeted conservation efforts, showing that solutions are possible (Photo: Koshy Koshy/wiki commons)

New restrictions on the international trade of threatened species and intensive conservation measures leading to increases in precarious species populations (such as those seen in world populations of Tiger and Giant Panda), show that solutions are possible. Dr Robin Freeman, head of ZSL's Indicators & Assessments Unit, said: "One of the things I think is most important about these stats, these trends are declines in the number of animals in wildlife populations — they are not extinctions. By and large they are not vanishing, and that presents us with an opportunity to do something about it."

Food production to meet the needs of an expanding human population is a key driver of the overfishing, hunting and destruction of habitats that is causing biodiversity loss. The Living Planet Report details the enormous strain agriculture places on freshwater systems, accounting for 70 per cent of water use and a substantial loss of wetlands. While large food industry interests have demonstrated they can feed the world, the report makes clear that the challenge now is to do so sustainably.

Dr Barrett added: "We do see particularly strong declines in the freshwater environment — for freshwater species alone, the decline stands at 81 per cent since 1970. This is related to the way water is used and taken out of fresh water systems, and also the fragmentation of freshwater systems through dam building, for example."

This year, international scientists recommended that humanity's impact on the Earth is now so profound that a new geological epoch — the Anthropocene — needs to be declared. The Ecological Footprint — which measures our use of goods and services generated by nature — indicates that mankind is consuming as if we had 1.6 Earths at our disposal. In the UK, the RSPB's State of Nature 2016 report shows that over the last 50 years, 56 per cent of native species have declined.

More information can be found at the WWF Living Planet Report 2016 web page.