Woodland chiefs sow the seeds of revival for Forester moth

A rare moth found in low numbers has got experts in a flutter by appearing in force at a Forestry Commission wood in the Northeast.

Over 1,000 green-winged Forester moths have been recorded in 200-hectare (500-acre) Coatham Wood, planted over the last decade on former agricultural land at Long Newton, near Middlesbrough. Butterfly Conservation say that makes Coatham the best known site in the UK for the creature, which is so thin on the ground it merits its own Biodiversity Action Plan. 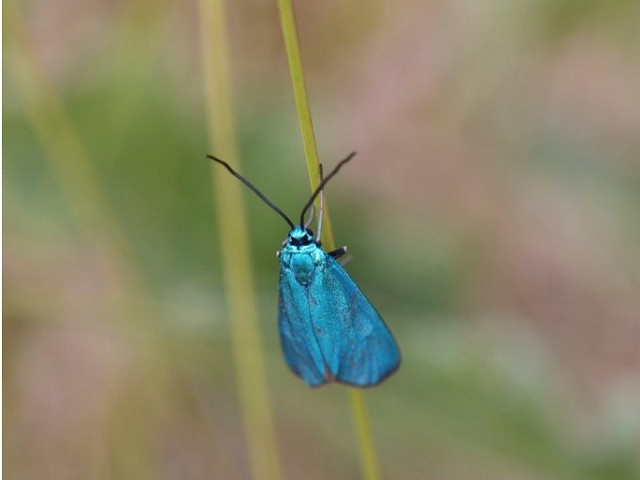 The news is a massive boost to conservation efforts and has caused a major stir. Dave Wainwright, from Butterfly Conservation in the northeast, said: "To say we were astounded by this record from Coatham is an understatement. We are talking about a pretty unusual moth here, with specific habitat requirements. Our local recorder, who made the discovery, said he stopped counting after he had spotted over 1,200 moths. It's created quite a buzz and is really tremendous news."

Forester moths fly on sunny days from mid-May to July, and at Coatham caterpillars are probably feeding on the sorrel, whilst adults will take nectar from a range of flowers. Although they can occur over a wide geographical area, they are locally rare, and also declining. The discovery was made on a 2.5-hectare (6.23-acre) wildflower meadow alongside the main woodland at Coatham, which was planted with 500,000 trees after the Forestry Commission bought the site in 1999.

Ian Blair from the Forestry Commission added: "We set out to create a range of habitats, including mixed woodland, forest glades and ponds, and we also sowed nearly six hectares of former wheat fields with wildflower seed. That's obviously done the trick. It's always good to hear of wildlife thriving rather than declining, and the wonderfully named Forester moth could almost be Coatham's new emblem."

Richard Fox, Surveys Manager for Butterfly Conservation, said: "This discovery is fantastic news. Britain's moths are in steep decline with 65 species extinct here since 1900 and an overall decrease in moth numbers of one third over the past 35 years. The Forester, an iridescent green moth named after the traditional green clothes worn by forestry workers, has been so badly affected that, in 2007, it was put into the top category of threatened species in the UK Biodiversity Action Plan. Although still found occasionally in most parts of the UK, it has been lost across large swathes of England and Wales. The Foresters flying at Coatham must have been an amazing sight!"