Wilson's Snipe admitted to Category A of the British List

The British Ornithologists' Union Records Committee (BOURC) has accepted the record of a juvenile American Common Snipe ('Wilson's Snipe') Gallinago gallinago delicata on St Mary's, Scilly, from 9th October 1998 until 7th April 1999 as the first record of this taxon for Britain. The BOURC's Taxonomic Sub-committee is actively reviewing the taxonomic status of Wilson's Snipe and its findings will be published shortly. 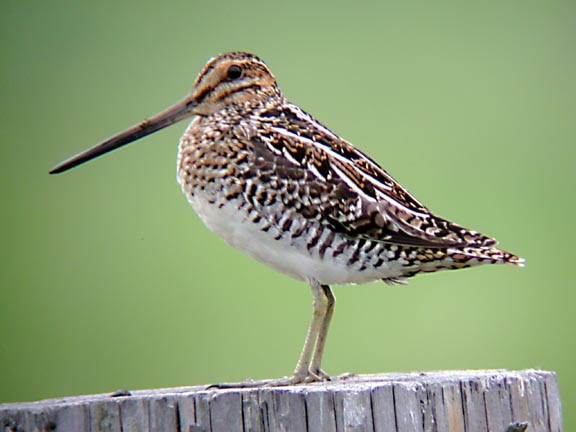 The Nearctic counterpart of Eurasian Common Snipe (including nominate gallinago and faeroeensis), Wilson's Snipe has a very extensive breeding distribution across northern North America, with a population possibly exceeding 5 million birds. Some birds from Newfoundland are thought to fly south across the western Atlantic in autumn towards wintering areas in Central or South America, so transatlantic vagrancy is to be expected. There have been other Western Palearctic records of vagrants from Ireland, France, the Canary Islands and the Azores (where at least 13 were reportedly shot in autumn 2007).

Already there are several subsequent claims from Britain and Wilson's Snipe may prove to be as regular a vagrant as some other Nearctic waders, but establishing identification is very difficult. Essentially the shape and pattern of the outer tail feathers need to be carefully noted and preferably photographed. Other important supporting features include the number of tail feathers (normally 16 in delicata), the narrower white trailing edge of the secondaries and broader dark barring on the axillaries. A paper summarising the differences between delicata, faeroeensis and nominate gallinago was recently published (British Birds 101: 189-200).

Bob McGowan, Chairman of BOURC, commented "Wilson's Snipe was deleted from the British List as recently as 1993 when Richard Meinertzhagen's record from South Uist (1920) and one from Lancashire (1957) were rejected after review. Yet this snipe has remained a fairly strong candidate for readmission to the List; it is a ubiquitous breeder in North America and some populations migrate long distances along the eastern seaboard. Nevertheless, even when considered as a possible or likely vagrant, Wilson's Snipe presents a considerable identification problem in the field. Although up to 14 characters have been variously postulated as identification aids, plumage variation in delicata (and faeroeensis and nominate gallinago) means that the most of these characters have an element of overlap; for example a 'typical' delicata pattern on axillaries and underwing is not necessarily indicative of delicata as some individuals of the other two taxa exhibit similar plumage. Fortunately for BOURC, a considerable effort had been made by BBRC and its consultants to rationalise and define the precise diagnostic characters essential for judging the record. Central to BOURC's consideration was the opportunity to assess the shape and width of the bird's outer tail feathers, perhaps the most critical feature in the file. This was made possible because excellent photographic images of the fanned tail formed part of the submission. With such thorough background information, BOURC was satisfied that identification had been established beyond doubt, and with negligible escape risk for the taxon, it was admitted to Category A."

Adam Rowlands, Chairman of BBRC, commented "This record was particularly challenging for BBRC to assess and was considered not proven at one stage (British Birds 98: 630 & 692). However, it was called for a further review when Killian Mullarney and Ian Lewington commented on a draft paper outlining the reasons for the BBRC decision. Their valuable input encouraged a re-evaluation of the file and the decision was overturned. Whilst it may well be a more regular vagrant than published records indicate, the variation within the nominate form and delicata does mean that some field claims may still be difficult to confirm. Observers faced with a putative delicata should endeavour to get high-quality photographs documenting the pattern of the outer tail-feather, axillaries, underwing and white tips to the secondaries. The shape of the outer tail-feather is also valuable, as are the number of tail-feathers, which may be possible to determine in exceptional photographs. Photographs of two or three of these features on a bird that shows the full suite of supportive characters would also assist a claim. It is of great credit to the original finders and photographers of the Scilly bird that the detail obtained allowed the identification to be established beyond doubt." 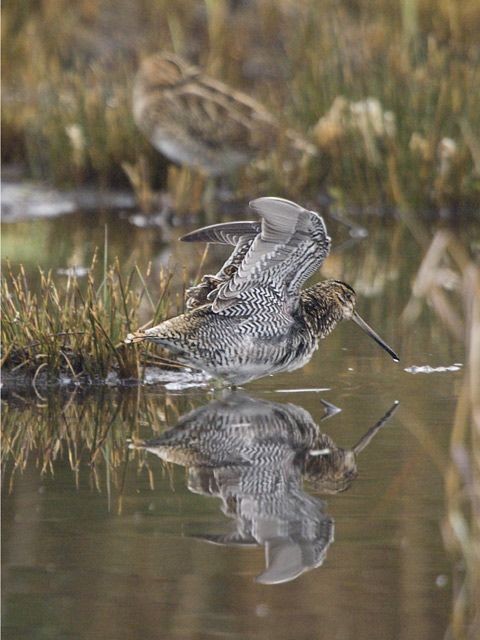 American Common Snipe is listed on the British List as follows -

Note that the bird pictured from the Scillies is not the bird in question, but a more recent arrival.