A significant proportion of Britain's wintering Whooper Swans have commenced their spring migration back to Iceland in recent days.

Although it is normal for Whoopers to begin heading north in March, and especially in the second half of the month, a particularly large push of birds took advantage of the clear and relatively calm conditions on Thursday and Friday to leave wintering grounds across Britain and Ireland.

A good majority of these were observed leaving the Fenlands of Cambridgeshire and Norfolk, where most of Britain's Whooper Swans spend the colder months. Several thousand birds can be found in this area between October and March.

This in turn gave patch birders from the Midlands, northern England and parts of Scotland an excellent opportunity to appreciate this spectacular annual event, with big flocks seen flying over many inland localities throughout Thursday, Friday and Saturday, as they gradually made their north through the country. Friday night proved clear and starry, and swans were heard passing over in the dead of night in the likes of Lincolnshire and Leicestershire, among other counties. By Saturday morning, most birds were further north, with a glut of records from Derbyshire and Yorkshire in particular. Meanwhile, on Thursday, it was reported that numerous flocks of up to 40 birds were moving up the west coast of Mainland Orkney and out to sea. 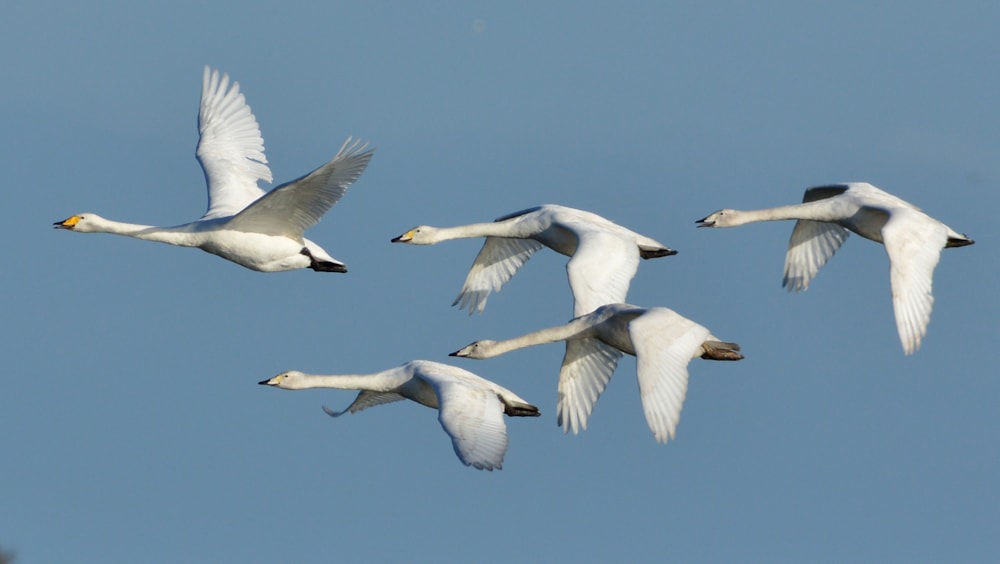 March, particularly the second half of the month, is the optimum time to see migrating Whooper Swans across inland areas in northern England (Jeremy Eyeons).

Whoopers usually migrate at relatively low altitude over land and are often heard uttering their unmistakable and far-carrying 'bugling' call long before being seen, giving observers plenty of warning as to their approaching presence. Flocks may sometimes total little more than a handful of birds, involving family parties, but other migrating 'herds' may number into the hundreds, moving in typical 'V' formation, creating a genuinely impressive sight as they pass low overhead.

Kane Brides, of the Wildfowl & Wetlands Trust (WWT), said of Friday's exodus: "It seems to have been a good day; several birds with GPS tags on have left the country today, departing out over the Outer Hebrides."

Find out more about Whooper Swans and what the WWT is doing to monitor them here.