A White-tailed Eagle, released as part of a reintroduction project in the Republic of Ireland, has been the subject of a dramatic rescue on the Aberdeenshire coast. RSPB Scotland, with help from Banff-based business North 58° Sea Adventures, were called to a remote cove, inaccessible by land, near Pennan, following reports of an injured bird.

The distressed eagle was first spotted by sea kayaker John Creighton and his wife on Saturday, who alerted RSPB Scotland the following day. After further investigations, the location was confirmed and a rescue mission launched. Rhian Evans, RSPB Scotland's East Scotland Sea Eagle Officer, rescued the bird: "It wasn't until we approached the beach that we saw that the eagle was alive, but was clearly tired and wet. Despite being there for three days, it was still fairly feisty and it actually took a while for us to retrieve it. Eventually I had to flush it off the cliffs by swimming towards it! Fortunately, thanks to John raising the alarm and to the amazing expertise of North 58° Sea Adventures we managed to bring it safely back to the mainland and it's currently recovering from its ordeal at the vets."

Ian Page, the skipper of the North 58° boat Buchaneer, said: "We had a falling tide and we were losing water and light. We could see Rhian running down the beach and then heading into the water. It was quite a decathlon but an excellent result."

The bird has been identified as a young male released in Ireland as part of the Irish Sea Eagle reintroduction project in 2010. Project Manager of the Irish Sea Eagle Reintroduction programme Dr Allan Mee added: "It was a shock to hear one of our young White-tailed Eagles was found in poor condition but fantastic that it's been rescued and now has a real chance of recovery. This bird is the fifth confirmed Irish-released White-tailed Eagle to have travelled to Scotland over the last four years. We are indebted to Rhian and the rescue team for their efforts."

The Irish Sea Eagle Reintroduction programme is based near Killarney, County Kerry, in southwest Ireland. Wandering individuals have regularly been seen along the west coast of Ireland from Cork north to Sligo, but news of a northeasterly movement of some 780 kilometres to the northeast Aberdeenshire coastline is noteworthy. 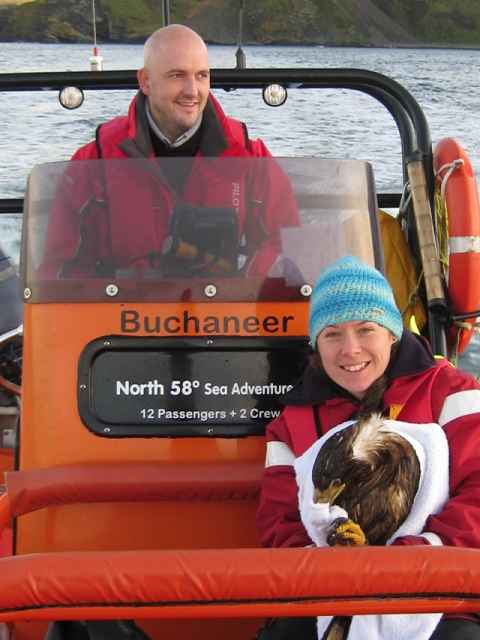