Whooper Swans in the north of Britain have successfully raised cygnets on Loch of Spiggie, Shetland, for the first time in 92 years. After an absence of more than nine decades, the pair of swans produced five cygnets this summer at the RSPB reserve, giving a boost to the Amber-listed species. The pair attempted to breed for the first time last year, but failed to produce any young; this is not uncommon in newly established pairs. This year the pair bred again and hatched five eggs. Unfortunately, one of the five cygnets was predated, taking the number down to four.

The remaining fledglings have overcome the first few dangerous months when they are most vulnerable to predators and have been happily swanning around RSPB Loch of Spiggie with their parents. Helen Moncrieff, RSPB Shetland Warden (South), said "This is fantastic news for the population of Whooper Swans on Shetland. We've done our best to ensure the swans were not disturbed by people visiting the loch and this seems to have paid off with the arrival of four young. The swans will stay as a family until late winter or early spring and then the four youngsters will be able to fend for themselves. Some Whooper Swans remain in Shetland all year round, with breeding attempts occurring annually since 1994 but this is the first time we've seen a pair successfully produce baby Whooper Swans at Loch of Spiggie. To think it's taken almost a century makes it all the more remarkable." 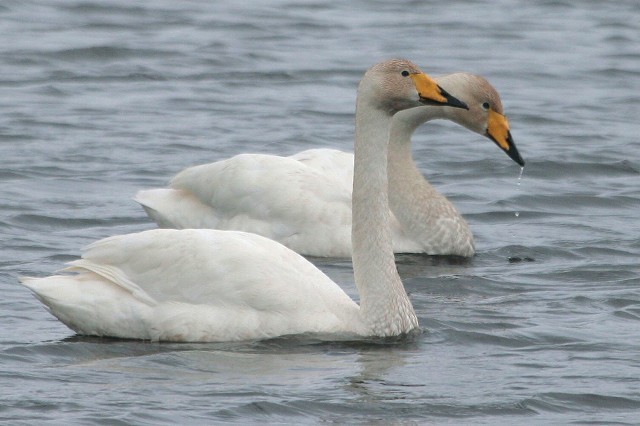 A wounded Whooper Swan from nearby Loch of Clumlie was brought to Loch of Spiggie in 1907 where it joined another maimed bird. In 1910, the pair bred and raised three young and went on to breed irregularly until the end of the First World War. Any young reared by the pair usually departed the following spring. The breeding Whooper Swans were shot dead in the winter of 1920 and this ended the presence of breeding on Loch of Spiggie until now.

Whooper Swans visit estuaries and wetlands on migration and for winter roosts; these sites need protecting. Their winter population and small breeding numbers make it an Amber List species. Loch of Spiggie is an RSPB reserve and designated area of SSSI (site of specific scientific interest) in part due to the presence of wintering Whooper Swans. This shallow loch attracts large numbers of wildfowl during the autumn and winter, including Whooper Swans, Wigeon and Teal. In summer Arctic Terns, Arctic Skuas and Great Skuas can be seen bathing here.