The Welsh Government has decided to continue to allow the shooting of Endangered Greenland White-fronted Geese.

Greenland White-fronted Geese are under serious threat of extinction, with the global population now below 20,000 birds and the wintering population in Wales at critically low levels. In the late 1990s, over 160 birds returned to their regular wintering site on the Dyfi estuary; that figure was down to only 24 last year, with a small number of sightings at one or two other places in north Wales. But, astonishingly, the Welsh Government announced this week that it will not implement a total ban on shooting White-fronted Geese across Wales. 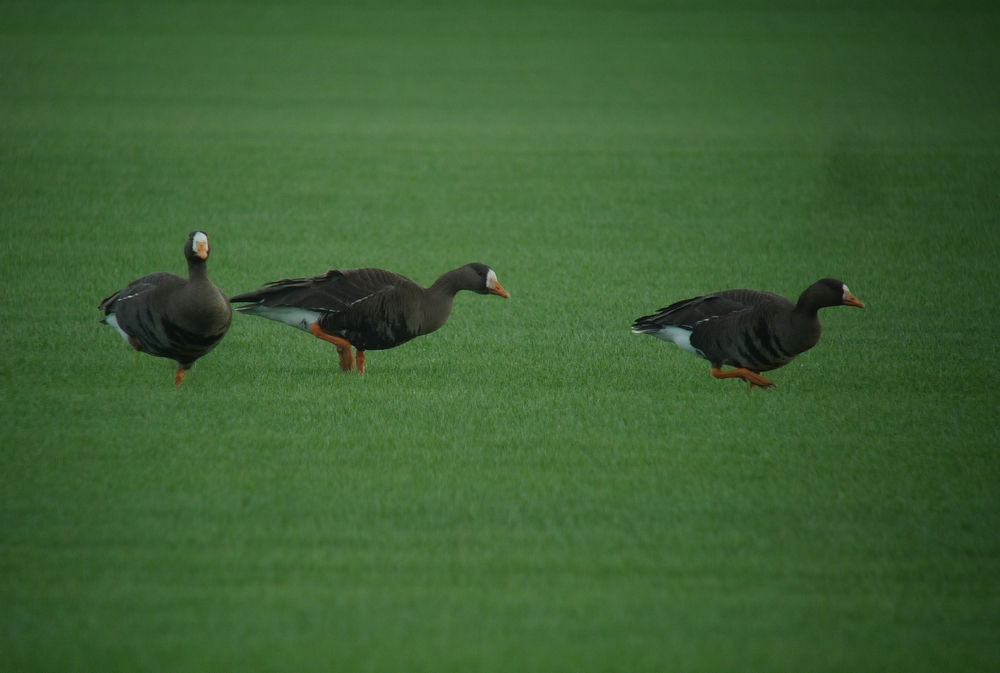 Greenland White-fronted Goose is endangered yet the Welsh Government will continue to allow them to be shot (Photo: Richard Jackson)

According to RSPB Cymru Director, Katie-Jo Luxton: "When a species is declining so quickly that it is under threat of extinction, you'd think the least that those in power could do is to offer it legal protection to prevent it from being shot."

"It is not clear how the Cabinet Secretary for Environment and Rural Affairs came to this decision, but what we do know is that she has gone against the advice of Natural Resources Wales, Welsh Government's own statutory nature conservation and environmental regulator, as well as the opinions of a number of Wales's conservation organisations and a large number of individuals."

In February 2016, the Welsh Government launched a public consultation to gather feedback on various options on promoting the conservation of both races of White-fronted Goose in Wales: the endangered Greenland subspecies and the globally more common — but still threatened in the UK — European White-fronted Goose. These options ranged from a complete ban on shooting White-fronted Geese, to maintaining the current voluntary ban on shooting the Greenland form on land over which wildfowling clubs have specific rights to shoot.

RSPB Cymru urged the public to ask the Welsh Government to introduce a total ban on shooting both subspecies, resulting in 75 per cent of people who responded supporting an option for a total ban, and only six per cent objecting to this option.

Such a large weight of opinion for a total ban was clearly not enough for the Welsh Government and it has opted to maintain the current voluntary ban. This now leaves Wales as the only country in the world where families of Greenland White-fronted Geese overwinter regularly where they aren't legally protected from being shot.

Katie-Jo Luxton continued: "It goes without saying that we're bitterly disappointed with this decision, especially as the Welsh Government claims in its response statement that it's 'crucial we do all we can to conserve this iconic bird'. Our Government leads the world on warm words for nature, but we are not seeing this backed up with the conservation action required."

The world population of the Arctic goose species is in severe decline and, while the voluntary ban has been successful to date where participating wildfowling clubs shoot, voluntary measures cannot protect these birds in flight during migration or in their movements between roosting and foraging sites, where no voluntary agreement is in place.

RSPB Cymru is urging for the Welsh Government to commit to fund not only the additional research it has committed to in its response statement, but also any subsequent conservation action arising from this study, to ensure Wales plays its part in saving these stunning migratory birds and ensure that they are part of our landscape for generations to come.