Vicarage Garden gets the chop!

The Vicarage garden on Holy Island, Northumberland, must surely be one of the best gardens in Britain for regularly attracting rarities. In recent autumns this small patch on an island where cover for tired migrants is rather limited has held sought-after species including Arctic, Radde's, Pallas's and Yellow-browed Warbler and, of course, last November's Red-flanked Bluetail. The latter proved a huge attraction, before moving to spend almost a week feeding along the grass verges and walls at nearby Chare Ends. Spring species in recent years have included Subalpine Warbler, Red-backed Shrike and, even stranger for the area, Nightjar and Kingfisher. 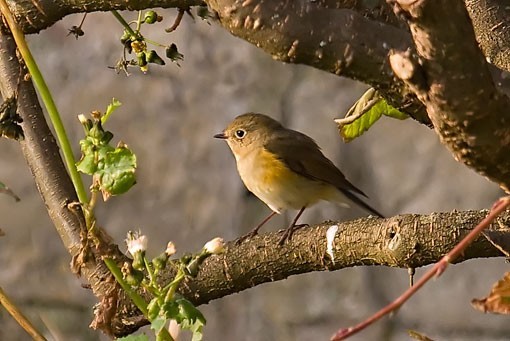 Many birders who have checked — or rather tried to check — this wonderful garden over the summer will have been very frustrated by the screen of high Hogweed and other tall plants that has effectively blocked the view from the usual spots along the field wall. The problem was brought to the attention of island birder Ian Kerr, author of The Birds of Holy Island, by a couple of regularly visiting birders in late August. Ian promptly took the problem up with the vicar, Brother Damian, who as a Franciscan is naturally very keen on birds and other wildlife!

Brother Damian immediately and very happily gave Ian permission to deal with the offending vegetation and a couple of hours' hard work with loppers and shears put the matter right. There is now a clear view from the wall into the garden and across to the trees and ground cover on the far side so beloved by both autumn and spring migrants.

Ian told Damian that every visiting birdwatcher this autumn would bless him for his co-operation. Being a man with a great sense of humour Brother Damian gently suggested that giving out blessings was perhaps more his line of work! Everything should be fine for October and November with clear views guaranteed if another Red-flanked Bluetail and Pallas's Warbler should grace the garden as they did last back end. However, Ian desperately needs a Siberian Rubythroat....