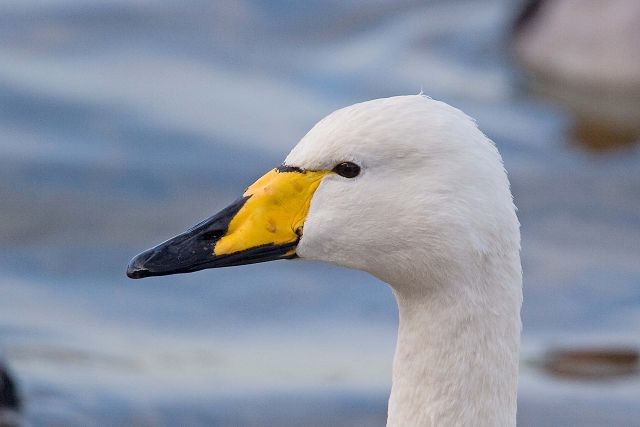 Whooper Swan: The authorities must work harder to present a balanced picture, and not allow automatic implication of wild birds as the likeliest vector every time an outbreak of H5N1 occurs. There is no evidence to implicate wild birds in the latest outbreak, despite suggestions in the media (photo: Garth Peacock).

Outbreaks of avian influenza H5N1 in 2007

In Hong Kong, H5N1 was confirmed in a chicken that had been illegally imported from China, and in several dead wild birds of various species. Circumstantial evidence suggests that the wild birds may have been (or could have preyed upon) captive individuals bought for so-called 'prayer release'. However, this hypothesis remains unconfirmed. Apart from these Hong Kong cases, no cases of H5N1 in wild birds have been confirmed since August 2006.

Most recently, two outbreaks were reported in Pakistan on 7th February, one in 'native chickens' and the other in 'fancy backyard poultry', including peafowl, pheasants, pigeons and parakeets. The OIE (World Organisation for Animal Health) report stated that the source of the virus was introduction of new wild animals, but did not say where these had come from.

H5N1 continued to infect and kill some unfortunate people, with human cases being reported in Indonesia, China and Egypt, and the first fatality in Nigeria.

In Hungary, H5N1 was confirmed in a flock of over 3,000 geese on a farm in the south-eastern county of Csongrád on 24th January. Csongrád borders the province where previous outbreaks, mainly in duck and goose farms, occurred in mid-2006. Details of the viral genetics are not yet available but initial reports are that the virus is substantially different to the one involved in the 2006 outbreak. The cause of the Hungary outbreak is unknown.

In the UK, H5N1 was confirmed on 3rd February in a large, closed turkey poultry farm in Suffolk, in the east of England. The infected flock comprised 159,000 turkeys. The UK authorities now believe that the Suffolk outbreak was most likely caused by movement of infected poultry material from Hungary. The company that owns the Suffolk farm, Bernard Matthews, has a poultry-processing subsidiary, SáGa Foods, in Hungary. Each week, around 38 tonnes of semi-processed turkey meat from Hungary has been brought in to the processing plant of the Suffolk farm, next to the shed where the outbreak started.

It has been reported in the UK media that the virus found in Suffolk is genetically identical to the one that appeared in Hungary around 10 days earlier.

Both the Hungarian and UK authorities have acted swiftly to cull birds and establish restriction zones, in line with revised and strengthened European Union legislation on controlling the virus. Several people in the UK fell ill after culling the birds but have not tested positive for H5N1.

The RSPB's Director of Conservation, Dr Mark Avery said: "Some commentators and non-ornithological experts are making rash assumptions about wild birds and their involvement in the spread of H5N1."

He added: "Whilst it is prudent to work on the assumption that this virus is present in some wild birds in Europe, what is known about this outbreak is difficult to reconcile with the idea that wild birds have brought H5N1 from eastern Europe to sealed sheds in Suffolk...we are concerned that undue emphasis on wild birds could prevent a proper understanding of the mechanisms of transmission of this avian disease."

The authorities in Russia have reported outbreaks of H5N1 around the end of January in the Krasnodar region (close to the Black Sea and Ukraine), with three different villages involved. However, these outbreaks (and the identification of H5N1) have not yet been confirmed.

In both the UK and Hungary, the media, 'expert' commentators and some officials, including Government ministers, have been quick to implicate wild birds. In the UK there were suggestions that a small wild bird could have entered the Suffolk farm through an air vent, or that faeces from infected gulls could have been tracked into the building.

If the UK outbreak is confirmed as being caused by transportation of poultry products, this will confirm just how easily this can happen. The spread of H5N1, and outbreaks of other high-pathogenicity forms in the past, have made it clear both how much movement there is of poultry and poultry products around the world, and how easily the virus can be carried in this way.

It is BirdLife's view that the authorities must work harder to present a balanced picture, and not allow automatic implication of wild birds as the likeliest vector every time an outbreak occurs. Even without additional evidence, the circumstances in these cases should have strongly suggested that other means of transmission were more likely:

At present, swift action by the authorities appears to have contained these two outbreaks. The risk to public health from H5N1 remains very small. Detailed advice, answers to frequently asked questions and the updated BirdLife position statement can all be found by visiting the BirdLife Statement on Avian Influenza.