Three nesting male Hen Harriers have vanished in Lancashire in as many weeks, in unexplained circumstances. Lancashire Police and the RSPB are appealing for any information that could uncover the fate of these rare upland birds of prey. The RSPB is also putting up a £10,000 reward for any information which leads to a conviction.

The first of the birds disappeared from its nest three weeks ago from the United Utilities Bowland Estate and a further two males on active nests have not been seen since Thursday 30 April. In the case of the first nest, a young male arrived almost immediately and took the place of the vanished bird, thereby securing the safety of the eggs. The other two nests were not so fortunate; in the absence of males to provide them with food, the females were forced to abandon their eggs, resulting in the failure of both nests. 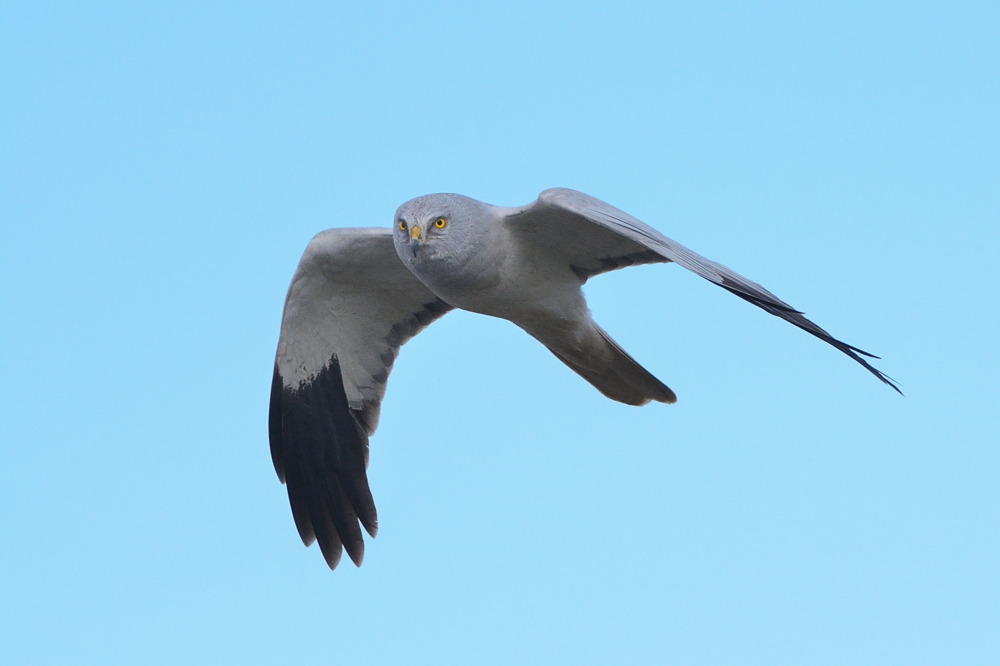 Hen Harriers are England's most threatened breeding bird of prey with only four successful nests in the whole country last year, two of which were on the United Utilities Bowland Estate. With the number of breeding birds so low, the failure of the two nests will have a serious impact on the Hen Harrier's future in England. The disappearance of the birds leaves just one active nest remaining in the Bowland Estate, putting the future of Hen Harriers in England even further in jeopardy.

The United Utilities Bowland Estate has long been the last remaining stronghold of the English Hen Harrier. The RSPB has been working on the estate for over 35 years and has developed a strong partnership with United Utilities, together with the support of its shooting and farming tenants. RSPB and United Utilities staff and volunteers, who have been monitoring the nests on the estate, are extremely concerned and upset by the sadly expected disappearance of the birds. Lancashire Police are investigating the matter.

In most circumstances, it is very unusual for male Hen Harriers to abandon an active nest; a 2008 government-commissioned report found that it almost never happened in most places. However, the report also revealed that nearly seven out of ten of the nesting attempts that failed on grouse moors did so following the disappearance of an adult. Nesting males are not only the Hen Harriers that have gone missing in the Bowland area in recent times: last September, two young satellite-tagged birds stopped transmitting only weeks after fledging from nests on the United Utilities Bowland Estate.

Over the next five years, as part of an EU LIFE+ funded project, the RSPB is satellite-tagging as many Hen Harrier chicks as possible. This will enable the organisation follow the birds wherever they go and monitor what happens to them, as well as identify blackspots where they're most at risk.

"Hen Harriers are hanging on by a thread in England and the disappearances of the past few weeks have made a desperate situation even worse.

We don't know what has happened to these three birds, but we will find out and we will save our Hen Harriers. This is an awful setback, but it will not stop us.

Over the last few days I've spoken to numerous staff and volunteers who are devastated by what has happened. But these events only strengthen our resolve to save this beautiful bird.' Lorraine Ellwood, Lancashire Police Rural Policing and Wildlife Co-ordinator, said: 'We are working very closely with the RSPB, United Utilities and the private estates within Lancashire and were hopeful for a successful breeding season.

We are all disappointed with what has happened but will continue to work together despite this setback."

Anyone with information about either of the birds should contact Crimestoppers on 0800 555 111 or, alternatively, call the RSPB's confidential hotline on 0845 466 3636.