Tracking that flash of blue

It comes as a surprise to many when they clap eyes on their first Kingfisher that these birds are not quite the size of a Rook. In fact, they're actually not much bigger than a Robin in size. The Kingfisher, or Cruidín in Irish, is truly unmistakable by its dazzling plumage. Yet despite their superb coloration, we know very little about their true distribution throughout the waterways of Ireland.

Kingfisher is a widespread breeder throughout most of Europe, with the European population estimated at fewer than 160,000 pairs. Numbers in Ireland have been estimated at somewhere between 1,000 to 2,500 pairs. In 2006, BirdWatch Ireland, the National Parks and Wildlife Service and the Office of Public Works collaborated to run a waterway birds project, focussing on gathering information on the distribution and abundance of breeding Kingfisher. 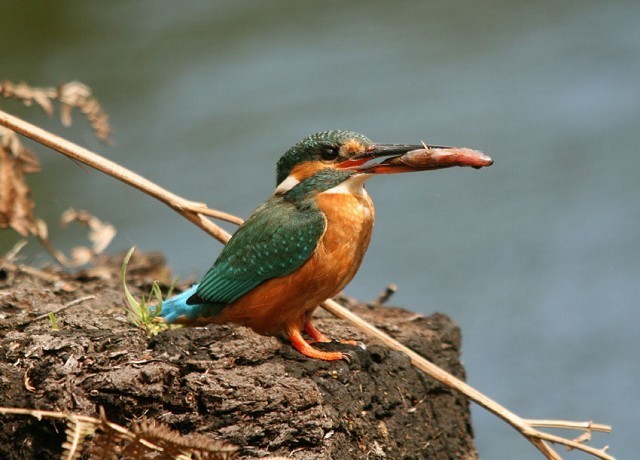 We called upon the public to provide information on the locations of sightings of Kingfishers. We also contacted a number of angling, kayaking and other groups associated with waterways. More than 2,000 records from 1,000 locations throughout Ireland were submitted. The survey clearly showed that Kingfisher remains widespread in Ireland, predominantly on the low-lying rivers, but not just along waterways, but also around lakes, docks and canals.

In 2008 and 2010, we concentrated our efforts on certain rivers, based on the knowledge that they continue to support Kingfisher. The selected rivers were large low-lying river complexes and were geographically widespread. They included the Rivers Boyne, Barrow and Nore in the east, and Blackwater, Clare and Moy in the west. We surveyed the rivers by walking along the banks or by boat, including rubber inflatable, double kayak and Canadian canoe. We were able to map distributions and estimate the number of territories on each river. Taking each of the river complexes as a whole, the density of territories ranged between one every 20 kilometres in the southwest to one every eight kilometres on two rivers in the east.

By comparing the results between 2008 and 2010, we have seen some variation in densities. Reasons for these differences are possibly due to some of the many threats facing Kingfisher populations. Kingfishers are high up in the food chain, and are especially vulnerable to river pollution that kills the fish these birds rely on. Summer floods can also make fishing difficult, resulting in starvation of the brood, and can claim nests. Human disturbance can pose serious problems. Kingfishers are also especially vulnerable to cold winters. It is encouraging to see that the densities witnessed in 2008 did not seem to decline by this summer 2010, despite the two cold winter periods in between.

For more information on the Kingfisher survey, see the full article in Wings.