For the first time ever the UK is hosting a nesting pair of Purple Herons. However the site, at Dungeness in Kent, is under threat from an airport development at Lydd. The striking birds breed in southern Europe and visit the UK in small numbers each year. But the nesting pair that recently made its home on the Dungeness peninsula is set to be the first to lay eggs and raise young in the UK. 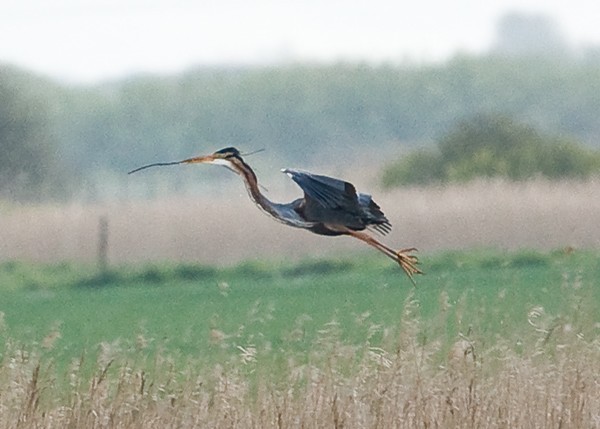 The RSPB has set up a round-the-clock Species Protection Scheme to protect what could be the first successful breeding pair of Purple Herons ever recorded in the UK. Kent police are helping the RSPB to protect the nest. Dr Mark Avery, the RSPB's conservation director, said: "The RSPB has a century-long heritage of protecting birds in Kent. Our protection scheme at the site provides immediate security for the birds, but the potential development of an airport on the peninsula casts a large shadow over the future of this magnificent site and its wildlife. Purple Herons are high up on the list of birds that we expect to see setting up home in southern Britain as the changing climate pushes them further north. This highlights the importance of wildlife havens like Dungeness in providing space for species displaced by global warming." 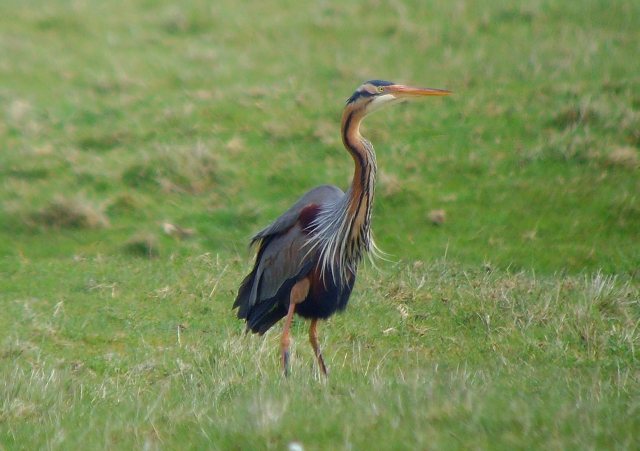 One of the pair of Purple Herons at Dungeness (Photo: Adrian Kettle)

Content continues after advertisements
Although Purple Herons have struggled in Europe over the last few decades, experts say the numbers of breeding Purple Herons are expected to increase in the UK in the years to come.

PC Michael Laidlow, Environmental Crime Coordinator at Kent Police, said: "We would remind any members of the public that any attempt to intentionally damage an occupied nest or remove eggs constitutes a criminal offence. This is a popular area for birdwatchers and the local community so I would urge anyone in the area who sees any suspicious activity to call the RSPB or Kent Police on 01622 690690."

Dr Avery added: "At the moment there is little for visitors to see as the birds are sitting tight on the nest. The area is a great place to visit and is teeming with spring wildlife — but please don't come hoping to see the herons as you are likely to be disappointed. If the eggs hatch successfully then we hope to set up a viewing station at a safe distance away from which the public will be able to catch a glimpse of this historic wildlife moment."

The Purple Heron, closely related to the larger and widespread Grey Heron, can reach 90cm in height with a wingspan of up to a metre and a half. In continental Europe the Purple Heron usually breeds in colonies in reedbeds and feeds in wetland areas on insects, reptiles and amphibians as well as other small animals. A migratory bird, the European population of Purple Herons spend the winter in Africa.

Meanwhile the RSPB is calling on the government to call in the planning applications for proposed expansion at Lydd Airport. The local authority Shepway District Council controversially consented the applications in the face of a recommendation to refuse given on environmental grounds by the council's own planning officials. So far over 10,000 representations have been made to the Government Office of the South East to ensure this decision is scrutinised in a full public inquiry.