As many as 6,700 Steppe Eagles have been discovered wintering at two rubbish dumps in Saudi Arabia, sparking local conservationists into action to protect these unlikely havens for the Endangered species.

The birds were found at refuse dumps some 170 km north of Riyadh, scavenging on carcasses and the remains of chickens which had been discarded from farms. This rather unlikely location was discovered when a team researching wintering Steppe Eagles in Oman noticed that a large proportion of satellite-tagged birds that they were tracking were showing up near the town of Shaqra, in central Saudi Arabia. Curious, the team reached out to birders in Saudi Arabia asking for their help. 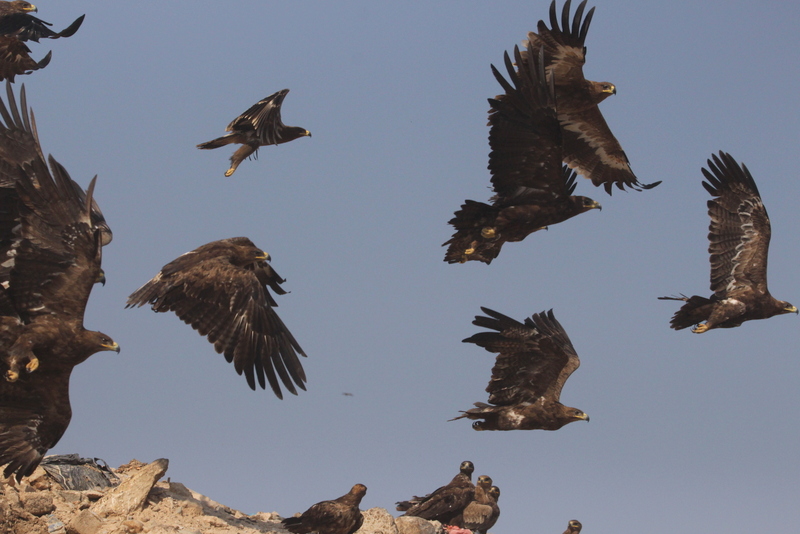 Several volunteers then offered to search for these birds and, upon visiting the two rubbish dumps located 12 km apart, it was clear that plenty of eagles were using the sites. After a number of subsequent visits and repeat counts, it was confirmed that up to 6,000 Steppe Eagles were at one dump alone, of which 60-70% were adults. A further 1,200 were counted at the other site.

Incredibly, this is the largest gathering of this globally threatened species ever recorded anywhere in the world, and accounts for approximately 7% of the estimated global population. Unfortunately, power lines surrounding the dumps pose a threat to the eagles, as does poisoned bait, which is put down to control feral dogs, wolves and hyenas.

"Although we were surprised to find such a large number of eagles at this previously unknown site, it highlights the possibility of a commensurately large tragedy occurring due to electrocution and poisoning events; such events have been seen in other locations", said Mike McGrady of International Avian Research.

As a result, work is being done to preserve the wider area and reduce the spread of poisoned bait. Furthermore, local authorities have recognised that there is a need for urgent actions to prevent further electrocution incidents.

Steppe Eagle was once considered the most common large eagle in the world, but has been tragically declining since 1997 – largely due to habitat loss – and since 2015 the species has been listed as Endangered.