On a June morning in Shropshire, the morning sun is already starting to warm the air. Hovering above the rough grass verge on the B5063 a little north of the village of Moreton Corbett is a female Common Kestrel, its sharp gaze searching for potential prey amongst the tangled stems below. It drops lower and hangs, wings beating rapidly, barely four feet above the vegetation close to the edge of the road. Moments later the small reddish-brown raptor is sent spinning forward onto the tarmac; back fractured and skull damaged, it is killed instantly by the impact of the HGV that powered down the road at just the wrong moment. 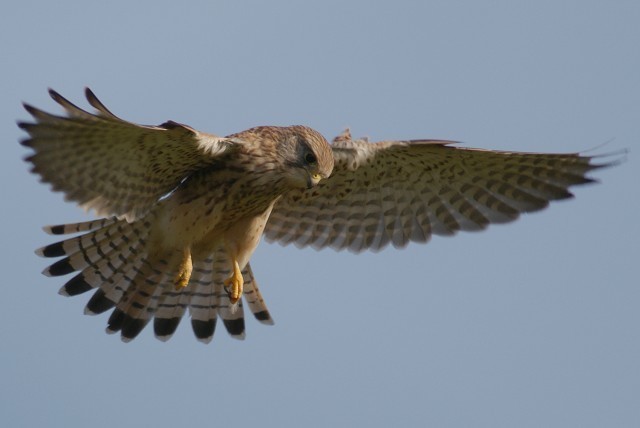 Raptors like the Common Kestrel and roadside hunting owl species such as Barn Owls and Tawny Owls are all-too-familiar victims of our modern busy roads.

Unlike most road casualties, the story of this particular female Kestrel doesn't end here. At some point in the next couple of days the broken body was found and collected, perhaps by a birder, maybe a farmer or someone simply out for a country walk. Our Kestrel then became one of about 20 in any given year to be sent to the Predatory Bird Monitoring Scheme (PBMS).

Recently relocated to new premises at the Lancaster Environment Centre, the PBMS has been running since the 60s and is one of the longest-running bird-monitoring schemes in the UK. Jointly funded by Natural England, the Environment Agency and the Campaign for Responsible Rodenticide Use, it monitors the levels of contaminants in birds of prey to determine how and why they vary between species and regions, how they are changing over time, and the effects that they may have on individual birds and on their populations. The scheme receives between three and four hundred dead birds of prey annually.

Barn Owls represent just over a third of the total received, with Sparrowhawks and Tawny Owls a further third between them. The number of Common Kestrels received in the last five years has declined by a third and now represents just 7% of all birds of prey received. This may be in part due to a decline in the Common Kestrel population. Many of the birds received are juveniles with peaks of receipt in autumn and late winter. 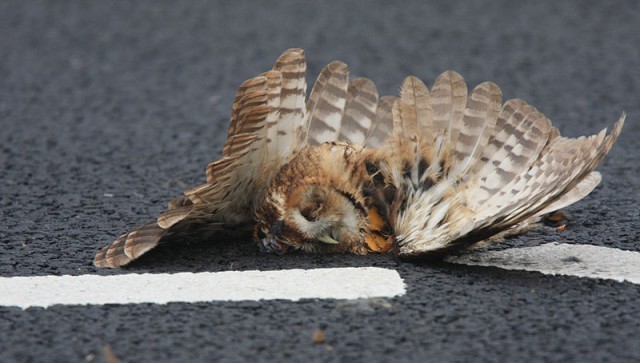 A six-strong team at the Centre for Ecology & Hydrology work on the PBMS and will send out a special box and bio-hazard bag to anyone contacting them with a dead bird of prey they wish to submit to the scheme. Full instructions about safe handling are included. Once the body has been received and processed, they also refund postage costs to the sender.

On receipt each body is allocated a unique reference number before being frozen ahead of a post mortem. In the case of our Shropshire Kestrel, it was this post mortem that revealed that it was an adult female. The sex was determined by plumage, and a convoluted oviduct showed that it had laid eggs at some point in its life. After the post mortem is complete, a range of tissue samples are taken for later analysis. These are taken from the liver, kidney, muscle, brain, bone and feather; also occasionally fat tissue samples are taken, although the team's work has revealed that most birds of prey have very little in the way of fat.

These tissue samples are added to a valuable archive that stretches back over 40 years. Samples are then carefully analysed using a technique called Liquid Chromatography Mass Spectrometry (LCMS), used specifically to measure and determine the presence of rodenticides. The technique works by breaking down rodenticide compounds to atomic-level particles and identifying them by weight. It allows identification of 1 part in 1000 million.

As many as 70% of the Common Kestrel liver tissue samples tested contain traces of rodenticide. Some of these are the less toxic 'first-generation rodenticides' such as Warfarin™, designed for outdoor use, but most, including our Shropshire Kestrel, show traces of the more toxic and persistent second generation of rodenticides. For our Kestrel there were traces of Brodifacoum™ which, despite its use being restricted to indoors, is found in 16% of Kestrels.

On a national scale the PBMS annual report, published by Natural England, helps reveal trends and provides valuable information that can determine government and industry policy on persistent organic pollutants, rodenticides and metals in the environment.

The more samples they receive then the more representative their data becomes. Anyone sending in a bird of prey will get a report on the post mortem and chemical analysis of the individual bird once completed. Lee Walker at the PBMS can be contacted by telephone on 01524 595830 or by email at leew@ceh.ac.uk. PBMS also has a website at http://pbms.ceh.ac.uk/.