The next bunting to go?

Conservationists are worried, but not surprised, when species with limited population size and restricted geographic range spiral into a downward trend. When widespread and abundant species show drastic declines in numbers and large-scale range contraction, however, the phenomenon is less expected and truly alarming.

The global population collapse of Yellow-breasted Bunting (Kamp et al 2015) is a recent example of such a widespread decline. This super-abundant species ranged across Eurasia, from eastern Siberia to Finland, just a few decades ago, and was expanding westward in recent times. Between 1980 and 2013, however, the estimated population size decreased by approximately 90 per cent and its range shrank by 3,000 miles.

This reported global decline of Yellow-breasted Bunting shed new light on the current population decline of Rustic Bunting in Fennoscandia. What had appeared to be a regional phenomenon on the edge of a huge breeding range could be something much bigger. 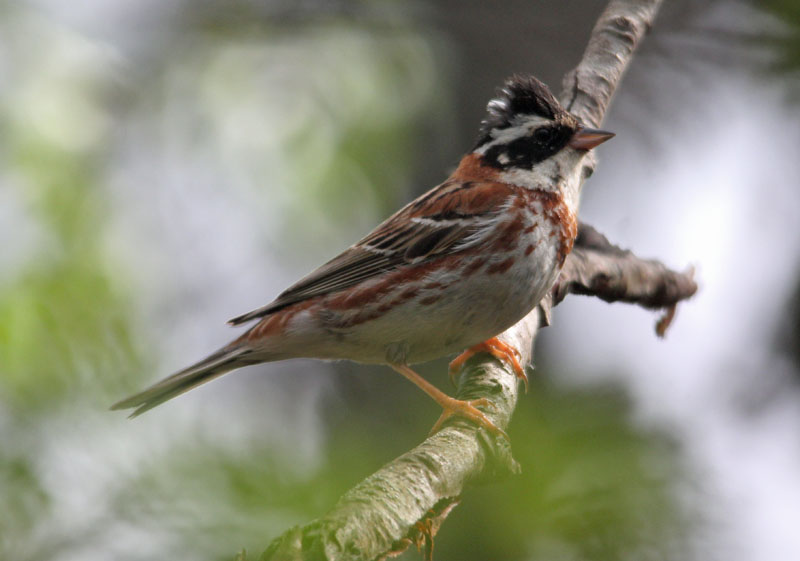 The number of territorial Rustic Buntings, like this male in Norway, has declined considerably across Fennoscandia (Photo: Simon Rix)

Rustic Bunting's breeding range encompasses 170 degrees of longitude across boreal Eurasia, from Fennoscandia to Kamchatka, covering an estimated 218 Mha. Within this range, the species is associated with lowland forests dominated by conifers, birches and willows. A tussocky bottom layer and the occurrence of standing or slow-flowing water appear to be preferred habitat characteristics. In much of its range (for example northern Fennoscandia and the Siberian lowlands) this habitat is abundant, but recent studies in Norway, Sweden and Finland have shown that most suitable habitat was not occupied by Rustic Bunting.

The winter range encompasses Japan, the Korean Peninsula and eastern and central mainland China, north of the tropic of Cancer. Rustic Buntings from Fennoscandia migrate to wintering sites some 4,000 miles east of their breeding grounds. During migration, rice paddies, stubble fields and fallow land, all preferably adjacent to woodlots and shrub land (including reedbeds), are important habitats. In these landscapes, flocks of staging Rustic Bunting occur, but huge gatherings on communal roosts are less frequent, in contrast to the roosting behaviour of the Yellow-breasted Bunting.

In the absence of long-term and range-wide data of the breeding population, we compiled available standardised monitoring data: three series of breeding survey data and three series of ringing data. We used TRIM to estimate yearly indices of three long-term (1985-2014) data sets (Finland breeding, Sweden migration and Japan migration) and three short-term (2005-2014) data sets (Norway breeding, Sweden breeding and China migration). Estimated annual decline rates were -4.5 to -6.1 per cent for the Swedish, Finnish and Japanese data. For the Chinese data the rate was -20 per cent and for the Norwegian data -30 per cent. The Norwegian data refer to a very small population and were not used in the successive range-wide trend estimate. 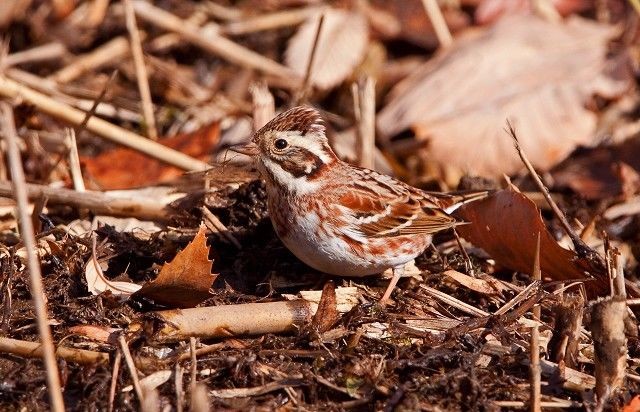 In our list of potential causes for these declines, climate change related increase of wildfires and melting permafrost were scored 'strong' for the breeding range. For staging and wintering habitats, increased use of pesticides, reduced acreage of stubble fields and loss of farmland habitat to settlements and forest plantation were listed for strong impact. Trapping for consumption or merit release also seems to be a serious threat, at least regionally.

Listing threats in eastern Asia can be interpreted as a 'blame game' by western societies, but it is not. Rather we want to emphasise the need for more international co-operation in research and conservation. Herein lies the key for flyway-wide conservation and management of our global common resources, Rustic Bunting and other long-distance migratory birds.