The Lady's Not For Turning

We are currently experiencing the largest invasion of Painted Lady butterflies this century. This large, powerfully flying insect is orange-brown in colour, with black-and-white patterning at the wingtips. They are arriving in unprecedented numbers all along the South coast, having originated from their core breeding area around the desert margins of North Africa. They have travelled across Europe and the English Channel and are now heading northwards through Britain. 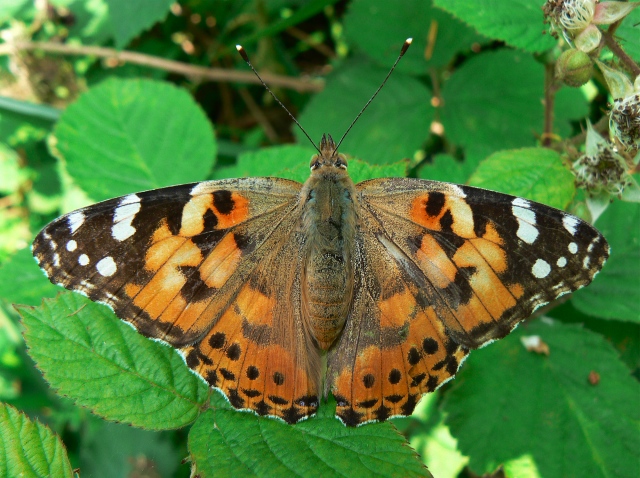 Neil Hulme, Chairman and West Sussex Conservation Officer for the Sussex Branch of the charity Butterfly Conservation, said "this is one of the great spectacles of the natural world and everyone will be able to spot these butterflies whether they live in the middle of a town or in the countryside. I have been watching butterflies for over forty years, but have never seen anything quite on this scale. The species turns up here most years, but numbers have been very low for some while now. A migration on this scale may result in the Painted Ladies reaching as far as the Arctic Circle, a journey of two thousand miles — they have already reached Scotland. The butterflies will be travelling by day and night, often through poor weather conditions, snatching brief periods of rest as they glide."

He added, "on Sunday afternoon East Sussex Conservation Officer Michael Blencowe phoned me in a state of excitement, as he could not believe what he was seeing. I joined him at the end of a woodland ride near Lewes, where he was counting Painted Ladies coming over a five-bar gate. He told me it was like counting sheep and that he had already recorded 133 in an hour. A further hour walking around the wood gave us a total of 250 and literally thousands would have passed through this single wood during the day. We were fascinated by their behaviour, which is typical of a mass butterfly migration. They just wouldn't stop for a rest, only landing here and there for a second or two, just to take on a snack of nectar 'fuel'. All were heading purposefully north — they are on a mission. On Monday evening at 8.45pm Painted Ladies were still coming in off the sea in central Worthing, flying northwards up Chapel Road."

"Many people have already asked me what causes this phenomenon. It seems likely that when the population increases sufficiently in Africa, this triggers a change in their behaviour. They start to swarm and then head off in huge numbers. Painted Ladies will already be here in their millions. They will breed here this summer, so we will have them around until the autumn, but they won't survive the winter in the UK as a temperature below about 5°C is fatal to the species. Get out and enjoy them while you can."

Those seeing Painted Lady butterflies are urged to send their records to the Butterfly Conservation National Painted Lady Survey page at www.butterfly-conservation.org/migrantwatch where an interactive map is being used to plot the migration.