The eagles have landed!

An official ministerial welcome will be given to up to 20 White-tailed Eagle chicks when they arrive in Scotland this Friday 26th June as part of the reintroduction programme for Britain's largest and most spectacular bird of prey. Environment minister Roseanna Cunningham will greet the chicks — the third batch of the five year East Scotland Sea Eagles (ESSE) reintroduction project — before they are taken to ten purpose-built aviaries at a secret location on Forestry Commission Scotland land in Fife. They will be held and fed here for almost two months until they have developed all their flight feathers and are strong enough to fledge. 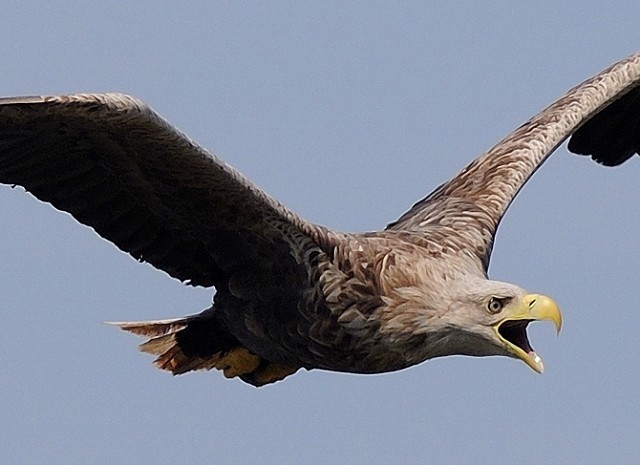 ESSE is a partnership between RSPB Scotland, Scottish Natural Heritage (SNH) and Forestry Commission Scotland to reintroduce the birds, affectionately known as 'flying barn doors' due to their massive eight-foot wingspan, to Eastern Scotland. They disappeared from the UK in Victorian times due to human persecution. Following successful reintroductions to the west of Scotland since the 1970s, the hope now is to restore the birds across the full extent of their former range in Scotland, and help the population to thrive.

Environment Minister Roseanna Cunningham said: "This is the first opportunity for me, as Minister for Environment, to personally welcome sea eagles to Scotland and I am delighted to be involved in this exciting project. Previously wiped out in Scotland it is apt these chicks are arriving in this year of Homecoming and I am confident their presence, and that of the White-tailed Eagles released before them, will help encourage visitors to our shores. Ultimately, however, the project's goal is to replace what was once lost and with 2010 as International Year of Biodiversity there is no better time to take action to boost the variety of life in Scotland. It is particularly gratifying that an animal driven to extinction by human persecution now has us going to great lengths to rectify the mistake. I'd like to congratulate RSPB Scotland, Forestry Commission Scotland and Scottish Natural Heritage on their efforts and I look forward to seeing these magnificent birds thriving in their new home." 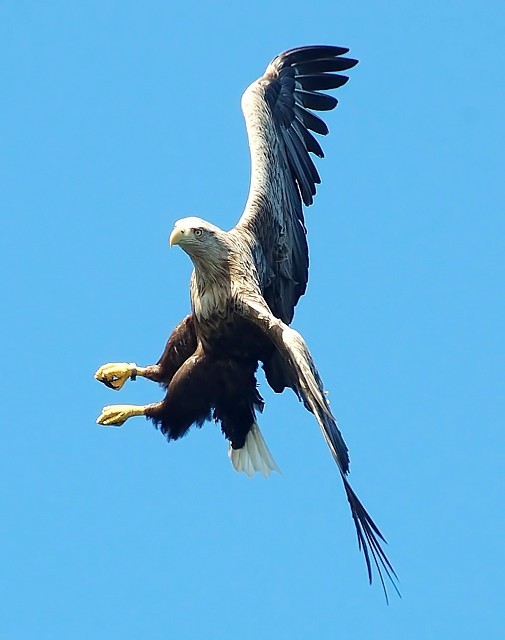 Claire Smith, RSPB Scotland White-tailed Eagle project officer, said: "With two previous batches of chicks now well established in the east of Scotland, this project is helping to ensure that these spectacular birds become an increasingly common sight all over the country. Over time, they will begin to link up with the established population in the west, helping boost the number of breeding pairs in the wild. We are already seeing the two populations of birds mixing with increasing visits from young west-coast birds to the east over the past few months. We have had hundreds of reported sightings and good wishes from people who are thrilled when they see these enormous birds soaring in the sky, back where they belong after being eradicated by man. It is thanks to the generosity of the people of Norway, who are donating all the chicks for this project, that this has been made possible."

Professor Colin Galbraith, director of policy and advice at SNH, said: "After great success in the west, this delivery of another 20 eagle chicks for the east coast brings us another step closer to establishing these remarkable birds from coast to coast. White-tailed Eagles are certainly doing well overall — our 2008 survey found that we have 44 breeding pairs and over 200 White-tailed Eagles, with ranges stretching across many areas of Scotland. Importantly, we will continue to work with landowners and managers in the release area to ensure that the birds settle in well to their new environment."

Moira Baptie, Environment Manager for Forestry Commission Scotland, said: "The project so far has been a great success and we are pleased to be been part of such a major effort to re-establish these magnificent birds in Scotland."

Please see www.rspb.org.uk/ourwork/conservation/projects/eastscotlandeagles for more information on ESSE, including the project blog.