Targeting hunters to save Spoon-billed Sandpiper

It is estimated that at least 220 Spoon-billed Sandpipers — about half the global population — winter in Myanmar's Gulf of Martaban. "Although not specifically targeted, Spoon-billed Sandpiper is regularly caught in nets that are set to catch other waders for food," said Htin Hla, Chairman of BANCA. "Evidence suggests that this trapping is the most likely cause of the rapid recent declines of this species."

In an attempt to mitigate hunting pressure, the Biodiversity and Nature Conservation Association (BANCA — BirdLife in Myanmar) carried out socio-economic surveys and provided livelihood replacement support in communities on both the eastern and western shores of the Gulf of Martaban. This process was supported by BirdLife International Preventing Extinctions Program and BirdLife Species Champion funding. On the eastern shore of the Gulf of Martaban, BANCA identified 26 bird hunters in 15 villages. Hunters were categorised as subsistence (where birds constituted the most important income source), opportunistic (income supplemented by birds) or occasional. Fifteen of the hunters in this survey were categorised as subsistence or opportunistic. On the basis of individual interviews, the hunters of eastern Martaban are estimated to have caught a total of 84 Spoon-billed Sandpipers between 1989 and 2011. 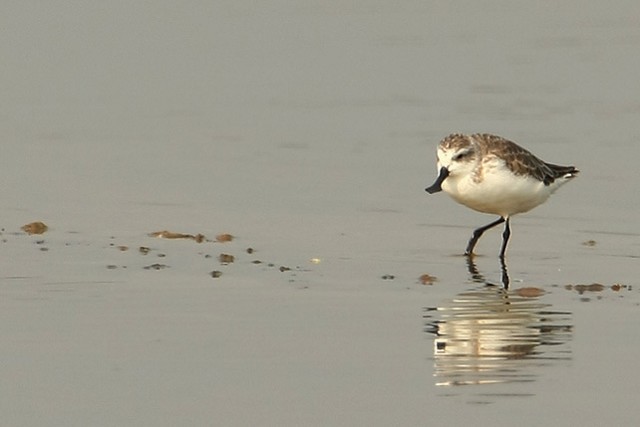 On the western shore, BANCA identified 37 bird hunters in 47 villages. However, only four hunters were categorised as subsistence (and three as opportunistic). These four individuals had no regular income. They supplemented bird hunting with catching crabs, working as agricultural labourers, piloting fishing boats and an array of other small jobs. Generally speaking, bird hunting was associated with the poorest households, those that had insufficient capacity to adopt more desirable livelihoods, such as fishing and shopkeeping.

Following these surveys, BANCA revisited each household to devise a suitable alternative livelihood for each subsistence and opportunistic hunter in exchange for a vow to cease hunting activities. Once a suitable replacement livelihood has been identified, BANCA provided the funds for each individual to start up their new work. These funds were used to purchase assets such as livestock, fishing boats and building materials. Alongside this, BANCA carried out educational activities in the villages to increase local awareness and appreciation of the Spoon-billed Sandpiper and other species.

On the eastern shore, nine of the 15 hunters had increased their livelihood status since the intervention and the other six had neither increased nor decreased their livelihood status. Hence the intervention has been hailed as a success, both for the birds and for the people. A follow-up survey has yet to be conducted within the western-shore communities.

"The future of the Spoon-billed Sandpiper is still very uncertain and there are multiple other conservation efforts currently underway. However, this innovative intervention might be critical in halting the decline of this spectacular bird's population", said Mike Crosby, BirdLife's Senior Conservation Officer for the Asia Division. BANCA will continue to monitor the status of the communities along the shores of Martaban. Further education programs and community development initiatives are planned, such as providing improved access to safe water.