The RSPB, with support from Natural England, are conducting a UK-wide Spotted Crake survey in 2012; this is only the second time this elusive species has been surveyed in this country. A network of sites where Spotted Crakes have been recorded previously will be surveyed throughout May and June by reserve staff and local volunteers. Spotted Crakes are virtually impossible to see during the breeding season — anyone trying to do so will most likely end up disappointed, and with wet feet — but their distinctive, repetitive 'whiplash' call is far-carrying across lowland wetlands on calm nights. Spotted Crakes may call through most of the night, from half an hour after sunset onwards, and in good listening conditions (rare so far this spring) may be heard from a kilometre or more away. 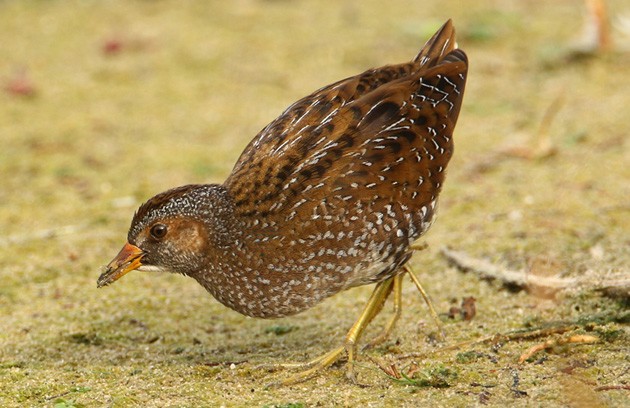 Once not uncommon in the UK, at least in the south, the Spotted Crake appears to have declined from the mid–19th century, if not earlier — as it is hardly the most conspicuous species, the historical record for Spotted Crake is not as good as for many birds. This period saw extensive drainage of wetlands such as the East Anglian fens and thus loss of many of the swamps, fens and wet grasslands that this species prefers; as a consequence, and as with many other wetland specialists, numbers of Spotted Crakes dwindled. Although Spotted Crakes are still found at sites scattered widely across the UK, numbers are now very low and occurrence appears to vary, with many locations only occasionally holding birds. The estimate from the first survey, in 1999, was 80 calling males. This is substantially higher than recorded in any other year, and demonstrates how in most years a high proportion of birds appear to go unreported, although possibly not undetected by birdwatchers. On average about 30 calling males have been reported to the Rare Breed Birds Panel in recent years. This might suggest that there has been a further decline, but with such an overlooked species we really cannot be sure whether this the case, hence the need for a repeat of the full survey.

A few sites are well known for hosting small numbers of Spotted Crakes, with four — the Nene and Ouse Washes, Lower Derwent Valley and Insh Marshes — having been identified as holding important populations. Outside of these locations Spotted Crakes occur, usually as single calling birds, at a range of wetland sites — during and since 1999 they have been reported over 130 sites. It is possible that birds may occupy sites outside of our recording network, so we are appealing for birdwatchers to let us know of any Spotted Crakes they hear while out birdwatching this spring (until the end of June), even if you suspect these may already be reported to the survey. Please email us at porzana@rspb.org.uk as soon as possible after hearing the bird(s), with full details including date, time and grid reference. The value of records will also be increased if they are also submitted to BirdTrack. Of course, birdwatching in wetland sites after dusk may bring other rewards, and we'd be interested in hearing of records of any other rare breeders — with the breeding of Spoonbill, Purple Heron and Little Bittern in southern wetlands in recent years, who's to say that Baillon's Crake won't be found?