The critically endangered Spoon-billed Sandpiper will be stepping into the limelight this week when the first programme in a new C4 documentary series is broadcast at 7pm on Saturday 5 November.

China: Between Clouds and Dreams is a new five-part series which aims to tell the story of China's relationship with nature and the environment, with special focus on the plight of the 'spoonies'.

The tiny wader was facing extinction five years ago with fewer than 100 pairs left in the wilds of eastern Russia. Today, the success of a major conservation breeding programme, set up in 2012 by a partnership including the WWT, RSPB, BTO, Birds Russia and Moscow Zoo, means that another 111 birds have been added to the world population.

That is buying valuable time for a species under threat from subsistence hunting and habitat loss, as the coastal mudflats on which they depend to rest and refuel during migration are reclaimed for human use. 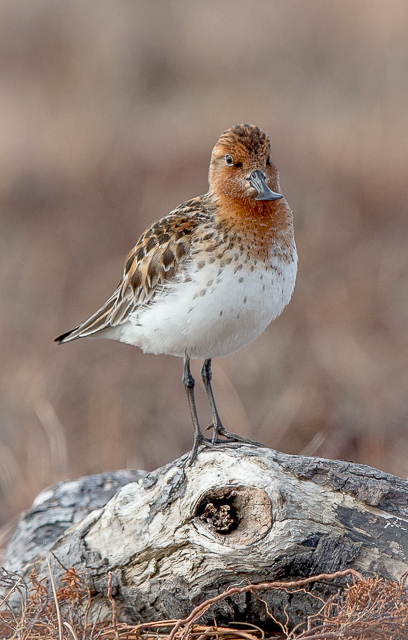 WWT Head of PR & Campaigns Peter Morris said: “We're delighted to announce the screening of the first episode of this new five-part series. It is particularly appropriate to shine the spotlight on the spoonies right now as they are the focus of ongoing conservation work to try to ensure the species' survival.

“This film really brings home how the plight of the Spoon-billed Sandpiper is intertwined with the lives of the people of China. Both are facing challenges and unpredictable futures. It's an inspiring story, the visuals are stunning, and how it ends is up to us.”

The series interweaves the stories of the people of China with ecology and natural history to highlight the interdependence of humans and creatures. It begins with pupils at a primary school receiving a letter which takes them on a journey into the heart of the fight to save Spoon-billed sandpiper.

BAFTA-award-winning film maker Phil Agland spent three years filming the documentary, focusing on the spoonies to tell the story of the effects of global warming and ecological collapse as China strives for an ambitious new future. The film was shot for Chinese Central Television and will play to a global audience of 100 million.

Phil hopes that the legacy of the series will be to safeguard the future of this iconic species and of the other shorebirds that use the East Asian — Australasian Flyway. On a local level, it may help the plans for a 'state of the art' centre for education and research, the centrepiece of a sustainable development programme which will integrate conservation and economic development to create a prestigious 'world centre' for the study of the flyway.